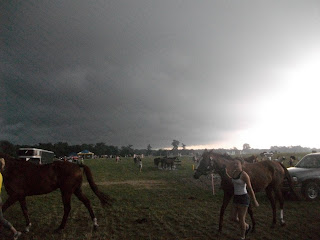 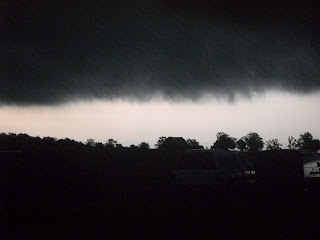 Is that not the scariest thing ever???????? That is literally how dark it was outside. I was scared shitless.
At approx. 8:10a.m., people scurried to get horses inside, tack, hay, chairs..everything.
Then, the wind blew like a hurricane and the sky opened up. I have videos, but have yet to upload them. It was insanity. It rained for an hour straight, and we were getting bored, cold and wet huddled in the barns. Beginning to wonder when they were going to call the show.
By 10a.m., two hours after the rain started, they called a meeting for all competitors. they explained that from the footing expert and vet reccomendations, continuing would be a bad idea. Um, DUH!?
WHO STILL wanted to ride in that footing? I for sure was ready to go and not even risk riding outside on that ring. But Prelim people and others were relentless. WTF!? You seriously want to put your horse and yourself in danger, JUST to qualify for the AEC's? I mean, sorry, but there will always be more AEC's, sucks, but it'd suck worse if your horse fell out there on you and broke itself or you, for good. IDIOTS.
The TD still decided to give it 2 more hours and then decide.
Many people left.
We stayed, since Abby was in 1st place and wanted to see what was going to happen...
3 hours later, the rain stopped its pounding, and the organizers had set up a makeshift, but legal SJ course inside in the tiniest indoor ring I have ever laid my eyes on.
OK, since we were here, why the hell not?
Insert rushing to get dressed, tacking up and convincing bewildered horse that we were indeed riding today.
It was kind of funny in retrospect, and I'm sure he was the most confused.
Divisions went fast, and it took only 30 minutes for my division to go. We had no warm-up and got to glance at the course before going. Since I was only Novice, I was not concerned about no-warm-up (injury wise) since I had trotted and walked him for 30 minutes on the driveway. I was however, concerened about remembering the course, and getting him to turn that tight!!
He ended up going clean!! He was a STAR! Turned on a dime, came back and extended when I asked and I was super duper happy!!!!!!!
What a ridiculous weekend.
Oh wait, doesn't stop there.
SInce we got about 7 inches of rain in 5 hours, you can only imagine what the grounds looked like. I will help you imagine... 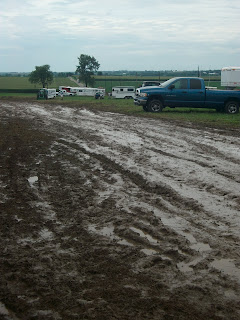 Beautiful isn't it? Actually, no. Since I had to get my rig out of that. It refused. So I had to get pulled out by a massive tractor....it was a ridiculous sight. After ALLLLLL that this weekend, the mud...was just....funny. All I could do was take it in stride and laugh my ass off. 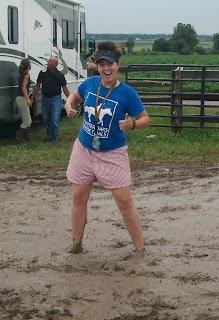 watch a video of the mud!
Overall, we ended up 5th out of 21 starters. Tons of people that stayed had issues with the SJ since it was indoors, but Yanks pulled it off! 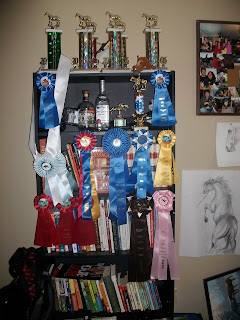 My pretty ribbon is the pink one next to our Queen park 8th. I've won all this this year :)
So....I've come to the conclusion...that who else would drive over 200 miles, spend over $600, sleep in no AC for a night (Thursday), put up with the heat, the braiding, the horse, the rain, the mud, the heat strokes...
...Only horse people. Because we are batshit crazy.
Posted by Checkmark115 at 3:25 PM
Email ThisBlogThis!Share to TwitterShare to FacebookShare to Pinterest