Well last Saturday I tried to take Yankee out before the weather got too cold to jump, and before finals started, but he was ever so slightly lame. I had an inkling about how it happened too. The farm moved him to a new paddock and stall, closer to the rest of the boarded horses so he had better company and I am POSITIVE he ran around like a maniac on the cold ground. He always has a ball in a new pasture and closer to new horses, I can bet thats what he did.

I was a little disappointed since I really wanted to jump over the XC course but I knew it was better not to risk it, of course. I had tacked him up and free lunged him as usual, but immediatly I could see something was off on his right hind. Yanks was overcompensating with his back left but I had to be sure he was indeed lame so I asked him to trot the other direction. Then I remembered that the side reins could be effecting his gaits especially in the cold so I took them off and asked him to trot off again. Still was lame. Sadface.

He was a good sport though trotting out for me. I hoped letting him rest it off would let him get the kinks out and sometime later that week I could ride again...buuuut alas, I got really sick. OF COURSE right smack in the middle of exam week. So no riding, and no being outside for a whole week. I've really missed my boy but I know he's in good hands with tha stable workers. I have to feed saturday so I'm hoping I get better. I would have updated the blog earlier but I've really been out of it.

Anyways here are some pics I took a while back for the christmas cards I want to send out. :) 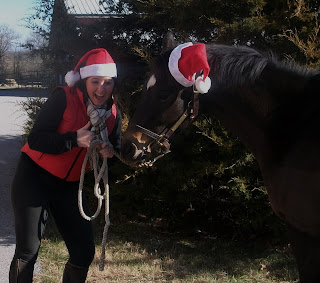 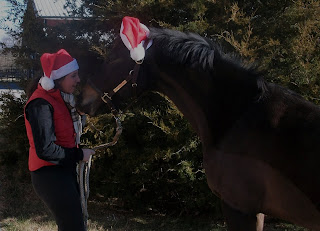