If you're friends with me in real life or follow me on the gram, you know what has been going on in my life that is literally consuming my every brain cell. I also leave for Dallas today on a 4 day business trip, so blogging and riding have taken a 1 week hiatus that started on Tuesday. After that we will resume to our regularly scheduled drivel, but until then here's a few adorable pics of my boys from the weekend; we somehow got them both with their tongues out and I love it. 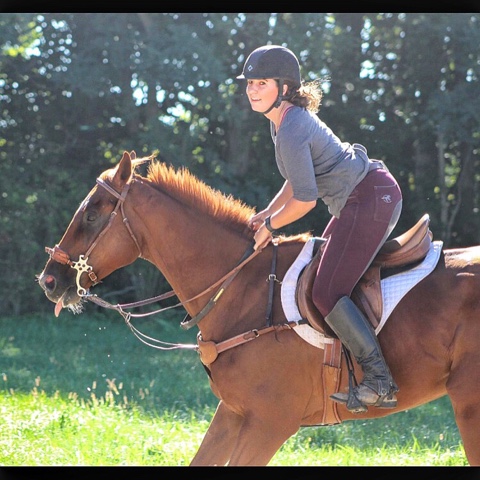 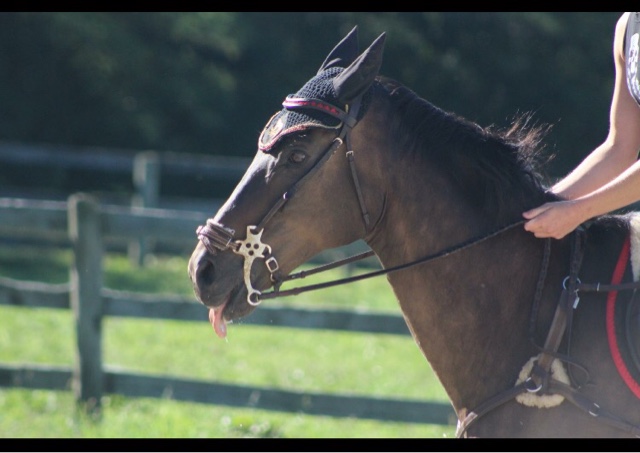 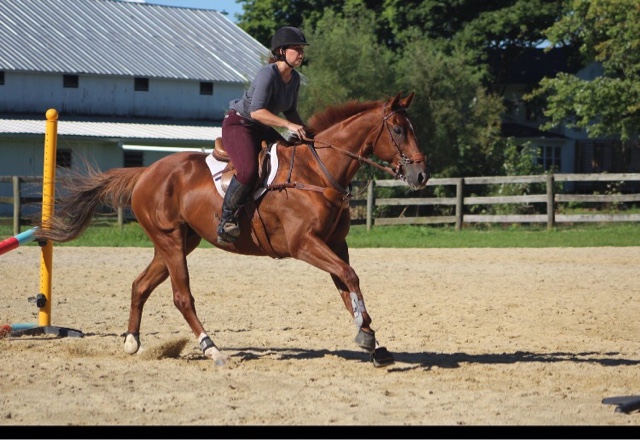 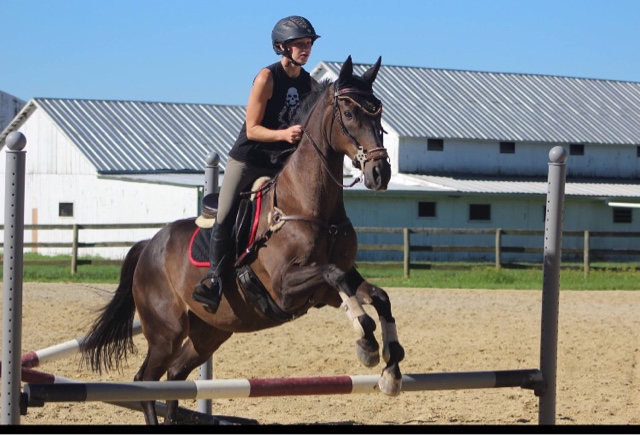 Have a good weekend y'all, BRB.

Posted by Checkmark115 at 8:25 AM 5 comments:
Email ThisBlogThis!Share to TwitterShare to FacebookShare to Pinterest


This weekend was actually packed full of pony things, including a trail ride, gridwork, XC schooling and flatwork. For once, I got video evidence of it all, but it would take me literal hours to type with my sleep deprived brain (thanks grad school), so it will happen bit by bit. Social media has spoilers.

It was a beautiful congregation of schedules working out and gorgeous weather, and V & I had a great weekend with the boys. Friday are my half days, so right after work we loaded the boys up for an easy and relaxing trail ride at Sugarcreek. Its about a 7 minute drive, so we loaded them fully tacked and headed over there! 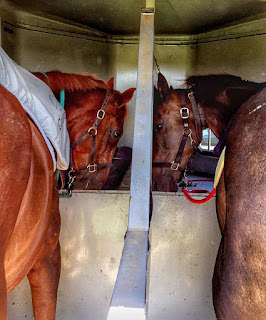 The breeze was wonderful, the sun was shining and we were enjoying meandering around for the better part of an hour. We played in a creek, galloped up a hill and walked through a neighborhood we found along the way. It was a fantastic break from "real life". 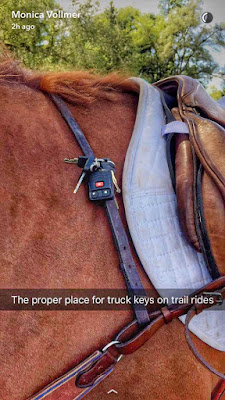 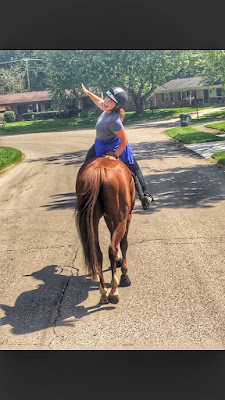 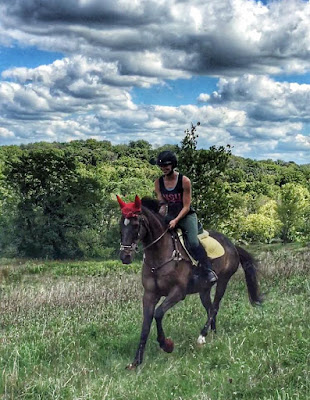 Saturday we had cooked up plan to bribe ask my friend L to help us set up a grid, take pics/video and overall be our jump bitch. The pics haven't been uploaded yet, but I do have video evidence and shitty screenshots documenting all the jumping glory.

I absolutely love gridwork, but it is impossible to do alone or without blocking off a giant chunk of time to set it up first. Luckily, many hands make light work and we got it set in about 30 minutes. It was a doozy of a grid-- I am evil. Sadly, someone took it down literally the second we were done. I was hoping the whole barn would be able to use it, and I had asked Supertrainer if it was OK to leave...but people still destroyed it >:(

The grid consisted of two sets of bounces and all one stride verticals in-between, with a progressively wider and taller oxer at the end as we went through the exercise. I love that in about 20 minutes you can get a better jumps school/workout in than if you rode for an hour over a course. Grids work that booty and ask for fancier footwork and concentration from the horse, while working on timing, balance and tempo.

Generally, I like to start with everything as ground poles and gradually add in elements and then start raising height. B especially needs the long and slow warm-up/introduction to that many poles, but he blew me away with his bravery! Usually, he backs off lines and the two other times we have done grids, he lost his damn mind over the pole confusion. Which honestly is to be expected of little bebe ponies, but I think he slowly maturing and learning how to jump properly and with less anxiety. Yay snail pace training!

My goals as a rider was to stay as still as possible and let B negotiate the grid himself. I only offered leg here and there when needed, but otherwise stayed quiet. It was much harder than it looked, and when some casual observers attempted it, they finished realizing as much. Gridwork, it'll get ya.

Gradually, as we went through the exercise, coming off the right and left lead interchangeably, L raised the jumps for us. I at first though the boys would back off and find it intimidating, but of anything they attacked and improved! B especially impressed me, even with the difficult bounce to one stride oxer. Here's a quick video with most of our passthroughs, ending with a wide 3'3 oxer at the end.

V was also present in this exercise, but was struggling a bit with timing. Yankee was doing her a favor the first few rounds by taking them through the exercise--but I wanted her to feel the difference between a good ride and a bad one. Eventually, she nailed her tempo and energy and started to really get some beautiful rides through the grid, ending with the same 3'3 oxer. I was super proud of her for how much she had learned in one quick session! 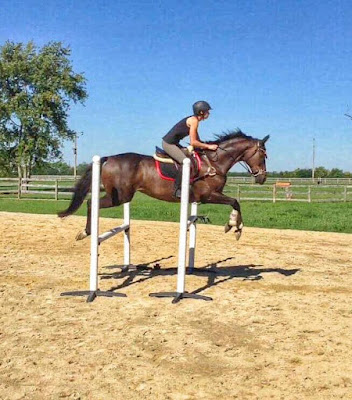 I am struggling with words today, considering I busted out a 16 page paper on Medical Law this weekend, but overall I was super pleased with my nugget and his increasing ability to negotiate jumps with ease and gusto. 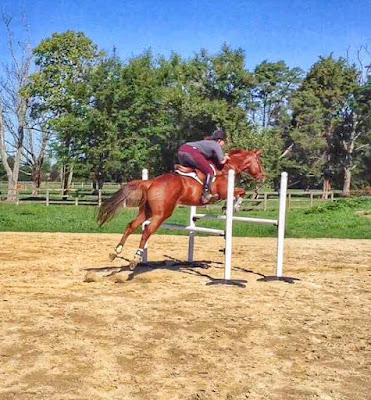 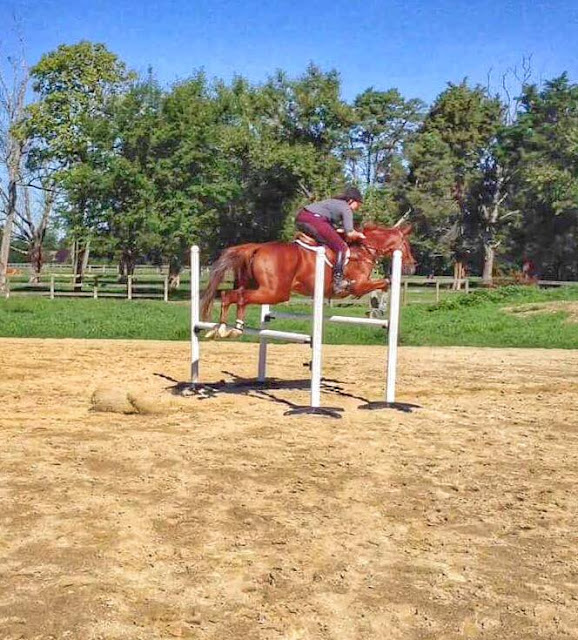 It took everything in my willpower to end the session after about 12 or so passes, really wanting to test the limits of B's jumping since he was doing so well...but I know there's a time and place for that and Saturday was not it. Grids are tough and we were planning to jump a few things two days later at Twin Towers while V schooled XC.

I learned a good lesson at the show last week and I'm trying this thing where I don't overface my baby too fast and too soon. I know is fully capable of jumping higher, but I am still recovering from my injury too! Overall though, I was super proud of V being open to instruction and staying humble, B for being a total badass, and me for not riding like a complete potato.

More fun pics and jumpy things to come! Apologies for writing like a 3rd grader today.
Posted by Checkmark115 at 7:50 AM 9 comments:
Email ThisBlogThis!Share to TwitterShare to FacebookShare to Pinterest
Newer Posts Older Posts Home
Subscribe to: Posts (Atom)