Yankee. Everyday. And Bacardi. Most days..

Started early with the much awaited jump school. Could barely sleep last night. Excited and nervous. Besides my injury in 2009 I had never taken longer off of riding/jumping (it was 10 months in 2009) and I was fretting I would forget everything and Yankee would forget and we would just fall over ourselves and die.. It was ridiculous.

As usual, my boy delivered. Perfect from the start. Trailering, arriving at a strange place, ride...everything. I even ground tied him for his hose off and he just stood there. If there's one horse I will love and appreciate for all of time, its my giant puppy Yankee.

UGH. I love him. Of course we warmed up over smaller stuff, but I couldn't waste trailering to an arena with standards and poles and jump thingies without doing something super fun!

And hey, my position isn't too shabby either for being an out of shape wet noodle.

...leaving out a stride and incidentally, knocking the rail off, I rode quite well too. Its like we just picked up right where we left off BEFORE we took our break.

We also traded horses, which was fun and educational. G's horse is HUGE. I mean absolute dinosaur. At least a thousand hands (18) tall. But he's super light, kind of like B. I'm getting better at riding huge strides! Sadly no pics of him. G fell instantly in love with Yankee but learned how much of an energizer bunny he is and how much contact/leg he needs and had him looking pretty fab on the flat after a little trial and error.

G is lucky, it may seem like I let a lot of people ride him, but I don't. You must earn my trust ;)

Then I got home and realized the jumping bug bit me and I just HAD to try Bacardi over some x-rails. I promised him (because of course, he understands me) that I wouldn't overface him too early into this relationship, so we will continue on x-rails and low verticals until he figures out where his legs go.

Minus B's ridiculous 5 minute shit show, he was AH-MAZING.

(To explain the "epic Bacardi meltdown: we walked out to the riding field. I was leading him because he is naturally wary of new things so I thought being on the ground would be helpful. I was mildly surprised he didn't seem to notice the appearance of jumps in his normally empty field. Cool. So I walked up to adjust a pole and just as I bent down, it was like he realized "HOLY FUCKING SHIT WHAT THE HELL IS THAAAA-NOPE" and reared straight in the air. Bai B! Yeah, I let go and he took off like a bat outta hell. racehorse fast, towards the pasture fence and I was like "hmm, cool maybe I will see proof of my allged thoughts of his scope if he doesn't kill himself first"...but then he did the most perfect dime turn, and galloped off (I see why he won races) around the entire 3 acre field, up the neighbors back field TOWARDS the highway and all I can think, in a monotone voice [because what was I going to do really, chase my OTTB on my wimpy humanoid legs] is "fucking cool, just bought that horse and now he is gonna get hit by a semi and die. Seriously my life what the fuck." Just then he changes direction and hightails it towards the barn and now I'm like [in same monotone] "oh ok he wont get hit by a car but surely he will get his legs caught in my $100 reins and snap his leg...and die." But he didn't. He just galloped ASFASTASPOSSIBLE to the barn and thats where I found him, looking all innocent basically making out with Yankee. We then had a "discussion" around the barrels for 10 min before he decided that they in fact, would not eat his flesh for lunch. BABIES SOMETIMES I SWEAR TO GOD.)


I almost cried I was so proud of my baby. He truly just wants to please, even if he's confused or nervous. I also learned that he is one of those horses that must.not.touch.rails.at.all.cost. 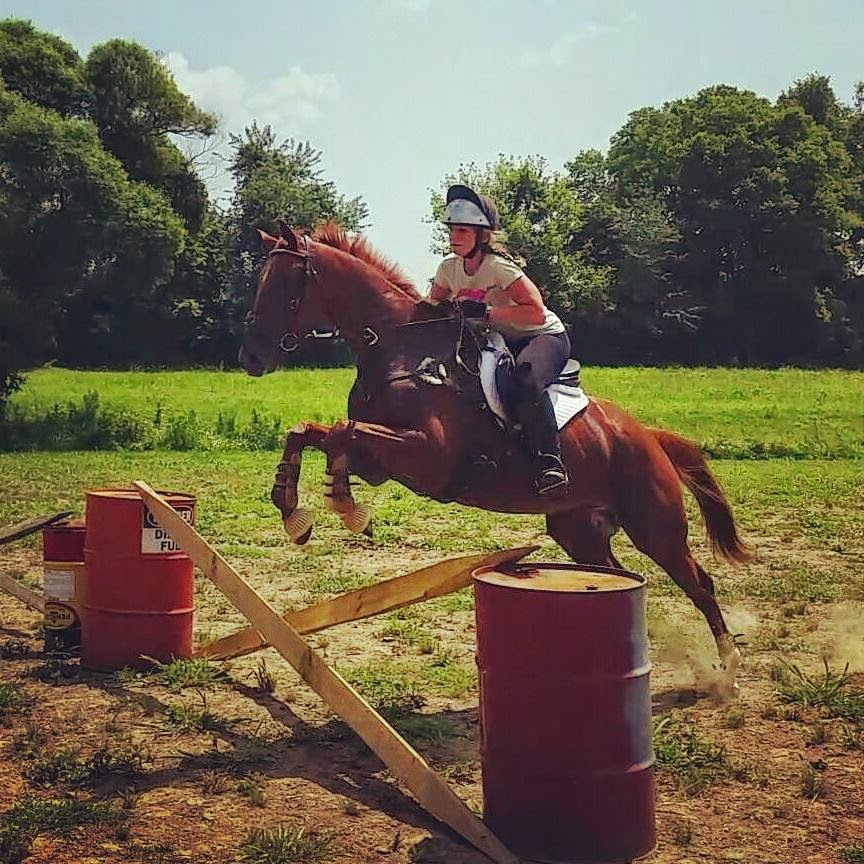 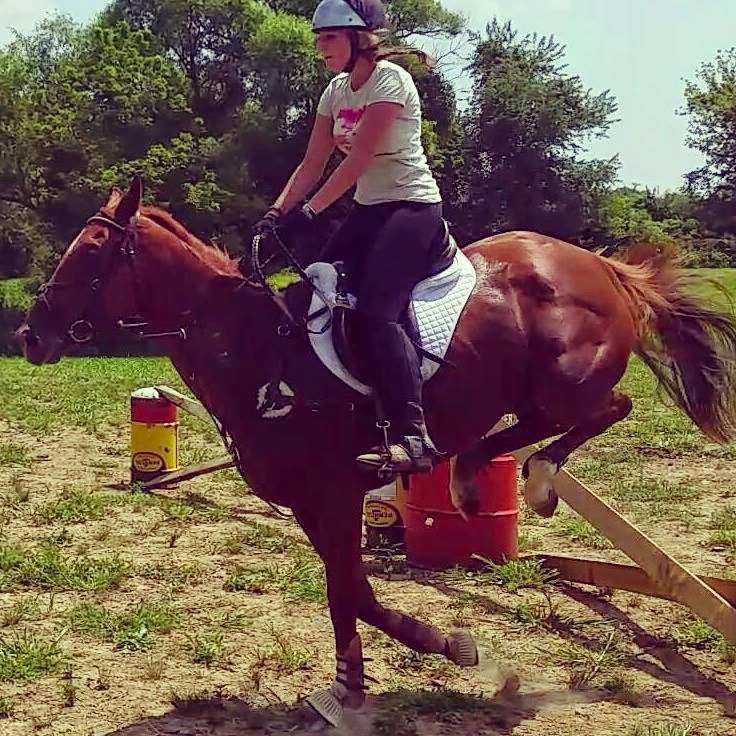 Haha fucking precious angel. That tuck though, can we please?

From the beginning though.

"The best at trot poles!"-Aimee (haha)

Then we propped up one side of the x-rail at a time to se ehow he navigated that. Fine. So we propped up the small fence, hopped it a few times, then the larger one. 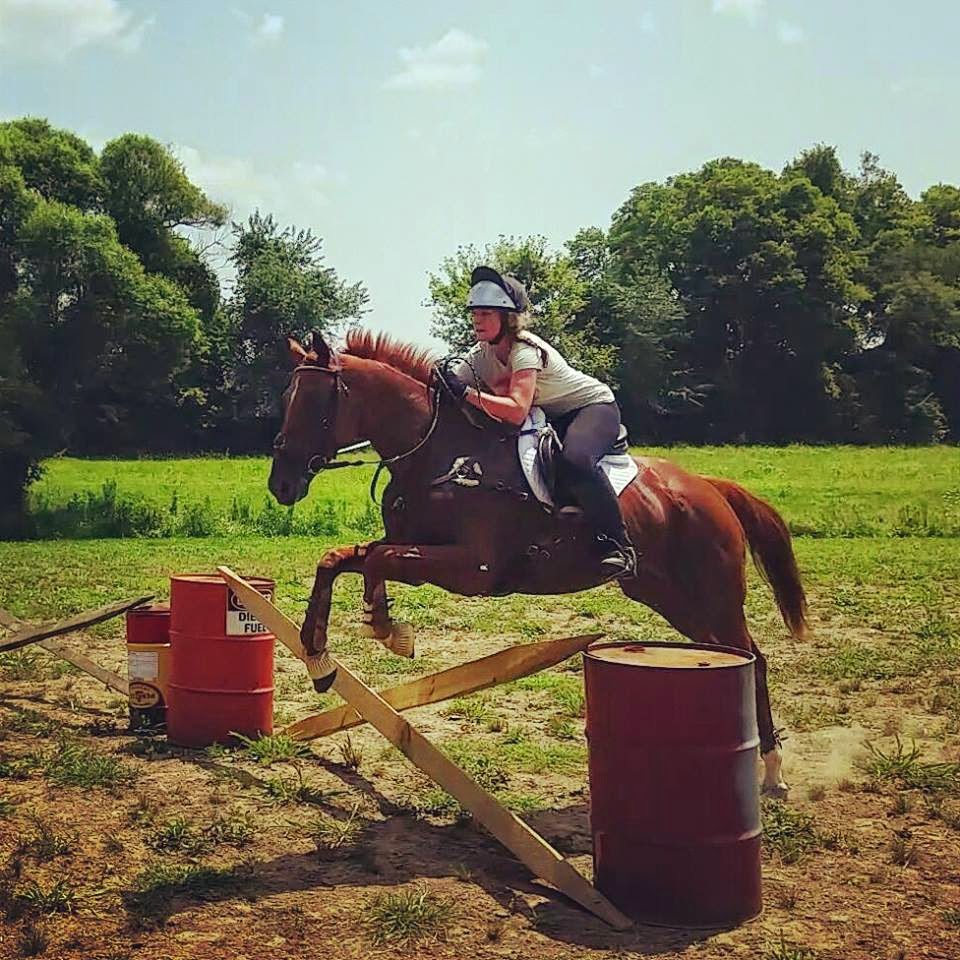 His jump is WAY different from Yankee and we are still learning together. It is MASSIVE and ROUND and basically throws me out of the tack. Almost slow motion like.. Yankee is deer-ish/pogo stick, bouncy and quick. I find if I stay back though, that's better than jumping ahead. We will grow together!

He also, because baby, gallops after the fences because he is still a little unbalanced. Obviously tempo will come with time/strength and because he always responds to half halts, I find this acceptable for now. I LOVE that he is straight as an arrow after fences, rather than ducking a shoulder too. 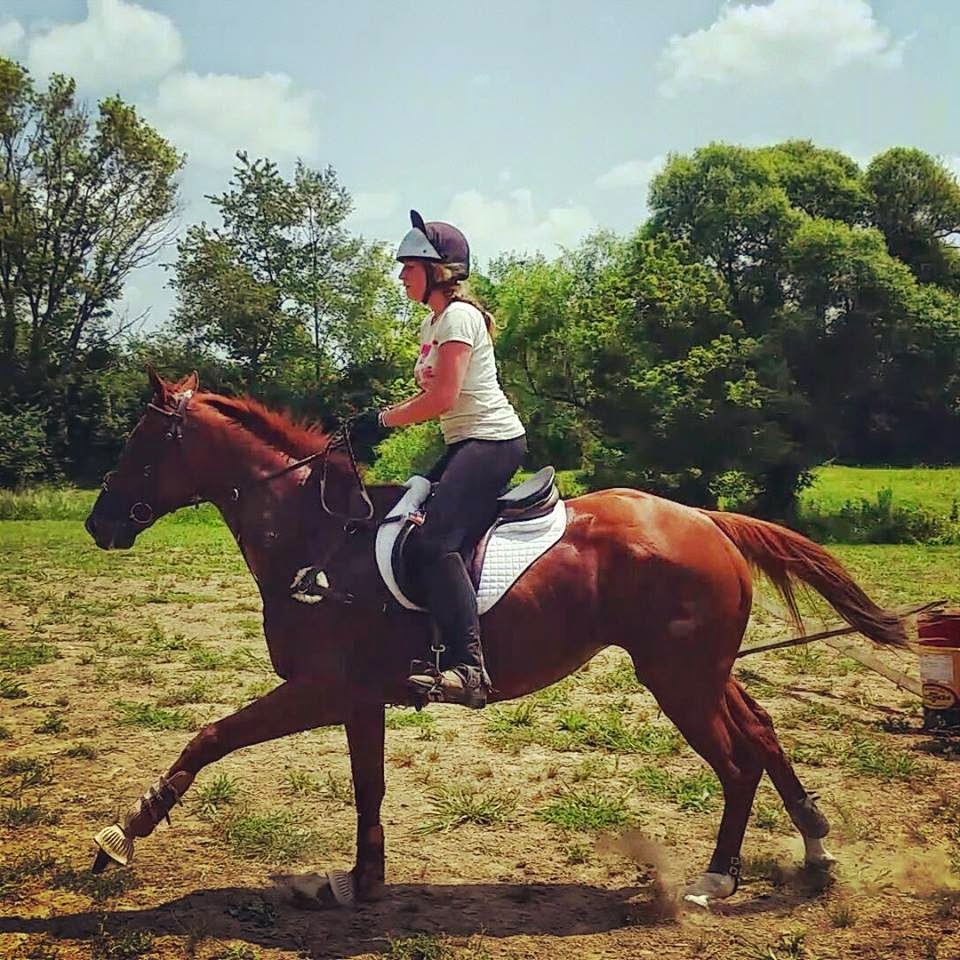 I love the last pic, even if I'm a little far behind. Dog and horse in sync!

Overall, a really good day...and a REALLY good workout. I am beat.
Posted by Checkmark115 at 9:39 PM 4 comments:
Email ThisBlogThis!Share to TwitterShare to FacebookShare to Pinterest

Sit. Stay. No Thanks.

I'm still not resting and doing all the things I shouldn't be doing. I just can't sit still and its a real problem.

I've ridden everyday, helped my bf move (which took 13 fucking hours) and done chores and all that, and then I regret it when I'm laying in bed throbbing all over and dying faster than the average human, and I cry into my paleo food and watch unnecessary amounts of netflix.

Took all three horsebeasts for a ride yesterday and they were total gems. Obviously.

Yankee, the trooper he is, carted around one of my friends around and she instantly fell in love. Everyone does. Bacardi only spooked at a few things, namely corn, and the horse eating squirrels living in the woods-understandable. And Lilly was perfect as usual for her owner. She really is a lovely mare.

On the Lilly front, I've been working on retraining her from western to english. As I said a while ago, she's VERY sensitive and requires the lightest feather hands you can imagine. She also tests you the first ten minutes of the ride but if you nip it in the bud with firmness, she quits. She's a NICE horse, just needs some schooling.

Today we worked on trot poles for the first time. She was awesome with those so we raised it to a little X-rail to see what she would do. yeah. Nothing. She knocked it over repeatedly. Figured it was best to just keep working on trot poles after that becasue she obviously didn't understand. Silly Lilly.

Kept the ride short because she requires a lot of leg and I tire easily, but it was a successful ride. Always interesting training the older horses as compared to young ones.

I've also been working B in the trailer. He's EXCEPTIONALLY keen on clicker training and I taught him in about 5 minutes how to pick up each leg by pointing at them with the whip and how to move forward by pointing at his hip. Now just to TRANSFER that into actually getting in the trailer.

He's still so very worried about it, so I take it slow and don't pressure him. Relaxation is my goal through the whole process. Yesterday I got his whole front half to lean in and chill out, but not take any steps up. Hopefully this week I can get some feet in.

i think it'd be fun to teach him tricks though, since he picks up the clicker wicked fast like some insane idiot savant.

Tomorrow I'm hauling Yankee to actually jump!! Its been FOURTEEN weeks since he's seen a single jump and *GASP* 66 weeks since I last took him XC schooling. The eventer inside me is dying slowly.