Ok first...how effing ADORABLE are these things?! They are even hairier than my mini and she is yak. I want. 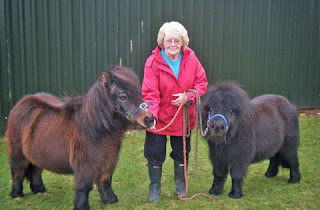 That's what we will be getting on our dressage tests this year, I know it!

Yankee was exceedingly brilliant yesterday in our early morning school, I was blown out of my saddle so to say. I kept thinking, "Is this MY horse?"

I WISH I had someone there to film it or take pictures or something because I am pretty sure no one would believe me. And I want some pictures!

He was so fluid, I felt like I was riding a river and it was powerful. Yankee was doin work yesterday for sure. I began with a short lunge, 2 min on each side, stretchy walking and lateral movement warm up. The bulk of our workout was extended trot down center line, collected trot down a long side-sidepass L, side pass R, canter from walk in corner, extend down opposite long side, free walk. Did that each direction about 5 times and called it quits after that. I probably only rode 25 minutes total (with lunging) but I went before class and had to scuttle to campus and it was BALLS HOT.

Did I just say hot?

Yeah I am really confused too. It is mid-February. In the midwest. Missouri.

It was already 66 at 8:30am and we were both sweating profusely after only 25 minutes. That day it reached 70 degrees....wtf. Today it is 48, but still, freakish weather!

I was elated, and was more than happy to go to class after that ride. I am defiently feeling some confidence on dressage scoring this season. My goal is to get AT LEAST one 9 on each test. We have never gotten a 9, usually 7's, 8's and the random 5 or 6 (rarely). Our training this winter has really progressed so I am going into the season feeling quite ready :)

I have been working out too! Not only to be fit for XC but to fit into my darn tall boots! I have only had them one season and they were like $500 so I can't just up and buy new ones. Basically I gained 30lbs and need to lose 10 more!! 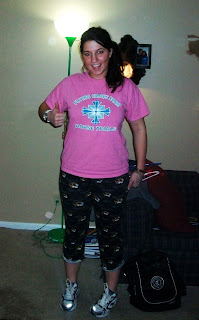 Yesterday was a be-uuuutiful day so I skipped math (shhh don't tell anyone) since I had the HW done a day before and turned it in, and its like a 25 min walk to the class that is only 40 min long then another 25 min walk back to my car and it's all BS anyways....whatever, I skipped, the world is not going to end.

So I debated heavily on what to do.....couldn't jump since no one else was there, didn't feel like doing dressage and since I didn't want to I thought Yanks wouldn't either and it was too wet to do canter sets in the field. I ended up doing a conditioning day with some looooooong trots and a few canters down our road.

First lemme say that the road is amazing to work down. Its all small little ground up gravely thingys in dirt....its like a race track but straight and hilly. YAY! It' slike everything I need....hills I find are amazing if you use them to walk and slow trot.

I wish I had the thing Klein mare and Stacey (yes I learned how to link!) have so I know how fit he is getting and all that fancy stuff it does.. I'm pretty sure it's expensive aaand I'm not made out of dinero.

So back to the road, Yanks LOVES road work. I wrapped him in polo's, bell boots and his jump tack. I started off free walking for the 1st 1/8 mile, then trotted on the flats, walked the 1st two hills, then increased to no walking, trotted the next 3 hills, then trotted the straights and cantered 2 more hills, then walked an 1/8 mile. At the end there is a 1/4 mile dirt path and we hand galloped on each lead, 1/4 mile one way, turned around and hand galloped on other lead 1/4 mile, walked, then trotted straights, cantered (altering leads) 4 hills then trotted the remainder and walked the last 1/4 mile home. Altogether we did 5 1/4 miles ( I checked with my car....ghetto fab!). I have been doing about 2 miles once a week just walk/trot, and gallop sets at least once every 2 weeks so he has been pretty fit as well as reg. work and he was barely breathing.

A major win, this is the 1st time he hasn't YANKED my effing arms off! He was so relaxed!!! He just settled in to a nice rhythm and did work. DO WORK :) Yay for being a grown up ponyface! OTTB success. Also we got like 5 compliments on my boy from people driving by /walking their dogs.

Anyways, it was 67 yesterday so he sweat a bit, and I was able to hose him off, which was nice, got all the grimy dirt out of his coat. I think he liked it. I gotta post a picture of him drinking straight out of the hose...adorable. Also gave hima good rubdown and hand graze.

Later that night I went to the gym and blasted out a massive workout (for me). 30 min. cardio and 30 min. circuit training core and upper body.

SOOOO today was a different story. I woke up feeling like I drank an entire keg. Yeah I didn't drink. My eyes hurt, head gonna explode, body was thrashed and I was like, WHAT did I do yesterday then remembered I beat the shit out of my body by riding for a solid hour and working out for a solid hour. Major calorie burn=major ouch.

Cutting to the chase, I zoned out in classes today, and had ZERO energy to go ride (or do anything else for that matter). I felt so guilty but it was like 70 today (yes SEVENTY. IN FEBRUARY. In the MIDWEST) and I was not ready for this. -5 last week, 70 this week.....sweaty and gross on top of feeling like a trainwreck

Yankee was feeling about the same. Poor guy was sweating just standing in the shade. He was not ready for this weather either as he has a full winter coat (clipped of course). I groomed him, lunged for approx 3 min to see if he was sore...only a little stiffness to the left. Which was good, I was thinking with all those hills he might be more sore, but he wasn't. Might be fitter/stronger than I thought.

Question for anyone. Eventer that I am, I have never had to condition really hard for any season, since he is a TB and remains pretty fit just in reg. work. But since I plan on going prelim this year I am doing a little extra than just our usual trot sets and hills. Is it normal/preferred to get a horse sore? Like with humans you usually want sore, since you break apart the muscles to build them up. But I actually don't know this one about horses. I feel a little ignorant asking...but hey better to ask and find out than not know and ruin a horse.

He was not heated in any legs and I gave him a massage as well. He seemed to enjoy that :)

Anywhoo I hope you all are enjoying the weather, if you are having nice-ness. Ta-ta for now.
Posted by Checkmark115 at 9:19 PM 4 comments:
Email ThisBlogThis!Share to TwitterShare to FacebookShare to Pinterest

I should be studying spanish but I HAD to write this down real quick...

In light of the recent melt of the ice age, warmer temperatures and stocking up on show supplies I find myself chomping on the bit to get competing again...

ALL effing day today I could not get my mind off this upcoming season. I was daydreaming about show schedules, braiding late at night before dressage day, warming up, the excitement of XC day, long road trips, moeny going down the drain all in the name of horses, dressage tests, stadium rounds, training techniques on and on and on.

I just CANNOT wait to be doing this again! 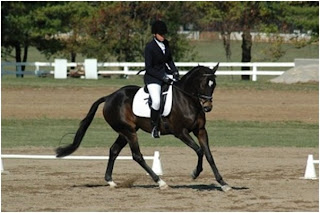 Minus being super rich, I feel this year will be our year. I feel extremely confidant in our recent success's and I hope to continue getting better. I know I can't rush things, and I have till May for the 1st event of my season, but I would love to hit up the (cheaper) dresasge and jumper shows.

I've been a zombie for about a week now in classes...zoning out when it gets too boring and try to meticulously plan everything out for this season. I have so many shows lined up! I know I won't be able to do all of them, but the more I plan for, the more that I will actually be able to attend.

First I need to convince my mom to let me come and get the family horse trailer 2 months early....I REEEALLY want to do some shows in March. Puh-leez mutty??

I found it funny whilst daydreaming, that I can remember exactly what supplements and rations to feed 20 horses, or the exact dates of every show in April-November, the rules for eventing, or when I last wormed-what kind of wormer it was, the last time the farrier came, and when he is due again but I for-the-life-of-me cannot conjugate the spanish verb 'ser' or what the range and domain of a function is.

I definitely wouldn't have it any other way.
Posted by Checkmark115 at 3:06 PM 4 comments:
Email ThisBlogThis!Share to TwitterShare to FacebookShare to Pinterest
Newer Posts Older Posts Home
Subscribe to: Posts (Atom)