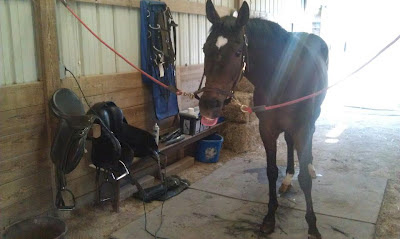 He got his mane washed yesterday, tail today, tail trimmed, nosey clipped, last minute mane pulling, bridle path shave, ear trim and fetlock shave. I also cleaned all his tack, took pads, wraps and boots home to wash, clothes are packed, and all of Yankees stuff is ready to go. Minus grain. Must get grain and sawdust.

WHEW! Its been 8 months since I've done this. Forgot how much work it is.. And how wet and dirty you get..I kind of hate it..

Luckily I bought beer for the show.﻿
Posted by Checkmark115 at 8:28 PM 3 comments:
Email ThisBlogThis!Share to TwitterShare to FacebookShare to Pinterest

So this is how XC schooling yesterday went... 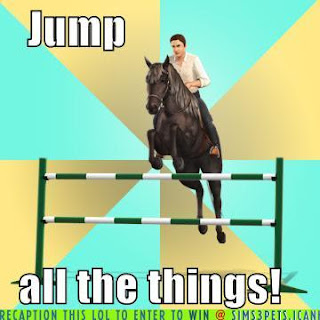 ...Even the 2 prelim fences, a massive table and a hogsback.

If anything, he was TOO enthusiastic. He about pulled my arms out of their sockets and I almost died from lack of cardio and being very out of riding shape. I;m afraid I might pass out on XC trying to hold him back! I wish I had the $$ to buy that meyler bit


So almost all of my anxiety has dissolved since the schooling show and XC school, but will most likely re-intensify when I arrive on the show grounds.

The main factors to my loss of nerve isn't actually his recent habit of refusals, but my utter lack of riding the past 3 months. Since Jackie has been leasing him, I've barely been riding 2 days a week, and even then they were mostly hacks or lazy trails. YEAH...not really conducive to going out and doing a full event.

Granted I WAS keeping my fat ass in shape by running, but a month ago final exams happened, then I got sick for a week and a half, and then summer happened. Que gaining 7 lbs in about 2 weeks out of pure laziness. No one to blame but myself, but I intended to get back into working out this week like a boss.

Not riding in a 3 day, all consuming, very exhaustive horse show in the blazing 92 degree heat with no hotel or AC. GAH.

Good news is though that he was jumping spot on, and I'm going to run through our test again today and give him Thursday off.

Our ride times are FREAKINIG excellent. I loathe riding in heat, and we will be done both days before it gets unbearable. I dislike riding super early because I feel rushed, but I am more than thankful that I ride when its cool. I also appreciate that they gave us ride times for stadium since the stadium ring is literally (yes, LITERALLY) one mile from the stables and there are no intercoms.

I had no idea there was a photographer at the CT on saturday and he snagged a few good shots. Minus the fact that I gained a solid 7 lbs last week and look like a cow (and am wearing yoga pants because allof my breeches have gone missing...) they are pretty OK pictures.

Apologies for the low quality. I stole them by snappy pics with my cellphone. Those never really turn out great. 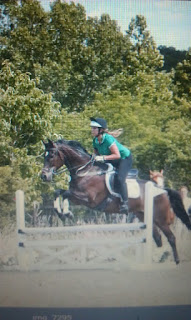 XC schooling tonight here in town. Hopefully they will be substantial enough to actually school over....

More on Queeny expectations and XC school update tomm. :)
Posted by Checkmark115 at 2:43 PM 11 comments:
Email ThisBlogThis!Share to TwitterShare to FacebookShare to Pinterest

Many many many things have happened since I last posted. I was just feeling lackluster about all the happenings and have been rather...blah lately. Depressed is the wrong word. Just, unmotivated...hot...bored...overwhelmed with my procrastinations...

Oh I know the word.

So things around the barn have sort of taken a 180 flip.

Yankees been doing a lot of this... 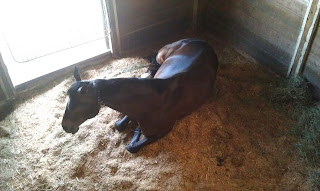 ...and I've been doing a whole lot of not riding. The temps have been fluctuating from high 70s to high 90s for about two weeks and it is currently face melting hot outside. That's why I'm in the AC...blogging.

After about 2 weeks of barely riding, and helping Jackie get ready for Queeny, she made the educated decision to not ride at Queeny and have me ride Mr. Refusealot at the first USEA show of the year and the schooling show this past Saturday. 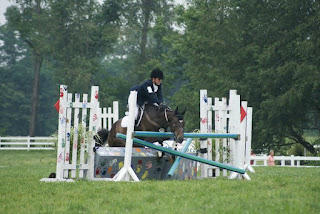 ...where I lost my nerve about jumping almost entirely...

...and last May, almost exactly a year ago, where I fell off of Yankee and at a show for the first time in my life and cracked my back and head pretty good on the XC fence..,

...jumping my horse confidently has been an issue.

You wouldn't know it because I don't ever tell anyone, but half the time I end up bracing for who-knows-what right before he takes off, which causes him to jump like shit, or refuse. I dropped to Novice last year to get my nerve back, but I ended up shaking so badly before each jumping phase that I choked. Luckily, he's a boss and Novice is basically sticks on the ground for him. I thought leasing him out would help our issue and Jackie proved to be a mass beast at jumping.

Lately though he's even been refusing with her. I thought we fixed it last week during XC schooling for good but I guess not :(

So I went to the schooling CT Saturday with major apprehension. Luckily I came armed with studs for extra gription on the shitty, hard, slippery ground and I attempted at having a positive attitude.

I did a first level test for warm up and ended up with a 65%. Not bad, but it wasn't good enough for me, haha. I LOATHE dressage in grass rings, and the second extended canter was on a DOWNHILL (wtf) and Yankee got a titch nervous and lost his balance for the last 1/3 of the test. Still though, better than he was  2-3 years ago when we couldn't even get a 30 (USEA) or a 60%.

We did our training Level dressage test almost right after and he was a gem. His lengthen trot was bleh, but again, the footing was slippery and I didn't stud for dressage. Overall he was relaxed, balanced and listening. We got a 34, which I again was not happy with. At the last CT we got a 32 and I was intent on beating myself with a goal of 31. Eventually I would love a 28-29, but with an OTTB that may or may not be entirely realistic.

I watched and memorized the stadium course, which was basically the worst course ever invented. Like, ever. I'm glad I studded for it.

I warmed up just fine. I galloped him out twice to get him forward and he was ATTACKING the fences, which I was happy about. AS long as we stayed forward and I rode him like my life depended on it, we would be fine....

So stupid. This was such a tiny PRACTICE show and I couldn't even keep it together.

Luckily he was on his game and the first 3 fences went very well. The fourth was not only a stupid awkward approach, but in the trees, shadowed and a dip before it. He refused this exact fence 3 weeks ago at the last show about 4 times. I got an inch ahead of him and he refused.

He took it he second time after I reminded him that he could do this in his sleep.

The rest of the course was perfect. He hapily rated where needed, jumped like a boss and turned on a dime. He attacked the triple combo and I was pleased.

I think I didn't breathe the whole time.

Weirdly, we had time faults, which was a theme of the day. Even the BN people had faults, which is unheard of. Tells you something about the course design. I was hauling ass where I had room, and I STILL got faults.

So anyways to end this novel and pick it up later with my thoughts anxiety about Queeny, here's our winnings from Saturday! 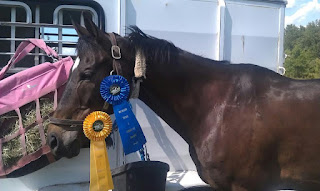 Dont forget to like us on FB for more updates :)