I was going to write a post about tails & my nice ride today but the combination of working from 7am-5pm (and going to the other job at 6) plus the news that one of my friends today lost a very dear ponyface to colic, made it difficult to summon the energy.

I never knew what it would feel like to lose a horse so close to me until Spirit The Wonder Pony died last spring. I didn't even own him anymore, but I still cried for days and broke down the instatn I heard the news. He was my first eventer and I loved him from the instant I saw his ad in the Dayton Daily News. I loved his scarred nose. I loved his white mane. I loved his speckles. I loved his ginormous head and tiny butt. I loved how he tucked his knees over fences. I loved training him to load into a trailer for hours at a time. I loved him. Funny how horses can touch your souls without you even knowing it.

And then a few weeks ago, with a terribly worded text message, I thought my Yankee was dying and I felt my world crashing down. I literally could not function. It was ridiculous and I never want to feel that way again.

It made me think of my friend. The heartbreak he and his girlfriend must be feeling over the loss of a beloved pony. I texted him condolences and he wrote back, "driving home with an empty trailer is the hardest thing I will ever have to do" and literally burst into tears right there against my pitchfork. I didn't even know what to say to that.

So please, everyone, go hug your horse and remember that even sometimes they duck a shoulder and refuse that coffin line, or have a sticky moment in the canter transition, or wont flex their ribcage to the right, or can't quite get their hind end to stay in line when half passing, or nail that lead change over fences, remember what it would feel like without them giving you hell.


Posted by Checkmark115 at 5:33 PM 6 comments:
Email ThisBlogThis!Share to TwitterShare to FacebookShare to Pinterest

Time for A Poll!

I've noticed that I have 93 followers now, which is awesome! Thank you guys!

It kind of blows my mind since I made this for myself as a journal I could look back on, but I've made so many great interwebz friends that it really is a special thing to me. I don't care how many people wish to read up on us, but its still pretty cool that you guys do, because apparently I have haters on the internet for no good reason.

So, as a little thank you, I thought I would do a contest of sorts when I hit 100 followers (who knows when that will be). I'm not near as crafty as Kate, and I don't have bitchin T-shirts like OTTB Tees but I CAN draw!

So, my lovely bloggers of the equestrian relm...what would you like the futuristic prize to be? A portrait of your horse? Or is that lame? I have no idea.


Posted by Checkmark115 at 5:28 PM 21 comments:
Email ThisBlogThis!Share to TwitterShare to FacebookShare to Pinterest

(if profanity offends you, you've been warned)

So of course, when I'm in a good place, happy and all that, the universe feels it necessary to pump the brakes and remind me that my life actually does indeed blow. I guess I shouldn't be surprised anymore.

I bet you're saying, "Oh this bitch over herr, she's just an overexaggerater complainer etc etc". But no. Truly, I swear to all that is holy, that I legitimately have the worst luck on the planet when it comes to accidents and unfortunate happenings. I don't really feel like highlighting "The Shitlist of 2012"  but at the top of the list in 2013 I can check off wrecking my car. This seems to be a thing for me. I wrecked my horse trailer in 2010 (brake line busted), totalled a car in 2011 (absolutely my fault), and I got hit by some dumbass in 2012.

This time I can blame it on black ice and a poorly placed cement berm. That motherfucker.

Let me spin a quick tale before we dive into the wonderland that was jumping the other day.

After my day at work & the barn, I headed over to help Jackie clip miss Isis mare at her barn. Afterwards, I decided to stay and hang out a bit, just because. A mere hour later though, there was an inch of snow on the ground and ice to boot. I figured staying the night would be safest and I would dig out my car, take my time driving and arrive safely at work and in one piece.

I took every precaution. Cellphone tucked in my purse. Creepin at 12 MPH. Eyes peeled. But god dammit, it just came out of nowhere. Felt the car starting to slip and I made a halfhearted attempt to fix the situation before I basically threw my hands up and said "This is happening right meow".

In slow motion, I saw the cement bastard coming towards us and I literally saw dollar bills flying out of my purse. Hit it with a crash, ramped, did a 180, and starting sliding backwards down the hill. I spun the wheel, hauled on the E-brake and managed to badassedly spin 180 again, righting myself. I looked around, feeling like a dejected badass, a little upset no one got to see that hot mess in action.

Of course I was only about a minute away from work (shit always happens at the END of the drive) and was able to crawl my sorry little car into the lot, clunking and sputtering. So. We will see how much that little adventure cost me. Pretty sure my axle is jacked and the front is completely out of whack. New tires will probably be in order. Awesome sauce.

Moving on from that little bump in the road (haha, punny), we arrive at how horrid my jumping position has gotten since 2010....


In 2010 I severed (yes, SEVERED) my achilles tendon and 6 months after that, I slipped on ice and broke the same leg. Do you see a trend here with unfortunate happenings? I gained 30 lb since I was on crutches for the better part of 8 months, Yankee stayed home in Ohio and he was leased to 2 of my eventing friends there. I healed, but I never jumped the same after that. Losing 25lbs helped a ton, but that leg is always a bugger and hurts A TON after a lot of jumping.

My goal for this jump school was simple, work on my auto release, and keep my crotch in the saddle, lower leg position will follow usually. Shall we gaze upon the perfection that was my position in 2010 (In these pics I was teaching myself auto release-to do so, I have to REALLY exaggerate the movement) as a base line? 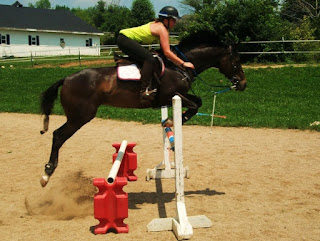 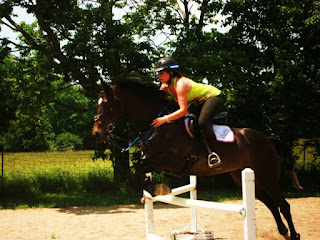 Ayla and I set up a simple 2 stride, a tough bending line-corner, 2 strides to skinny, 3 strides to vertical, and a wide oxer.

Yankee was QUITE grumpy, but did everything I asked of him in typical Yankee fashion. He made 3'6 seem boring and was actually kind of lazy. It was exceptionally warm (January's are weird in Missouri I guess. Last year around this time it was 80 deg for a few random days. I actually rode in a TANK TOP I was so hot), so that was nice at least. 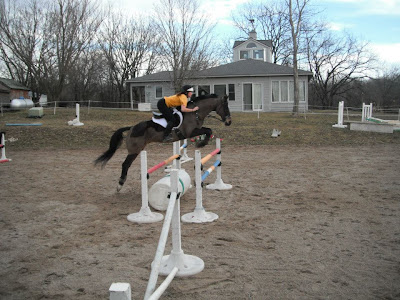 Yankee looks fabulous here I think! Knees, topline, expression, all great. I thought my seat was still too far out of the saddle, lower leg slipped a little and I didnt get the 'perfect' auto release. No straight line from elbow to bit, though I'm totally using core strength to balance, my hand is just hovering-not using his neck at all. 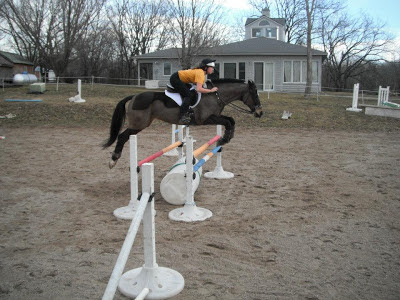 This is better for me (granted this was like try 14), but Yankee just looks hella bored, though still even and trying. I like my leg in this picture a lot, back is flat, and I don't feel I'm too behind or in front of the motion. I never did nail the auto release, but if I am counting not using his neck for balance or perching my hands like a hunter, I succeeded.

It takes a cray amount of concentration on my part, and I;m hoping after more practice sessions like this, it will just become muscle memory again.