Wow, I had such an amazing holiday! I hope everyone had a splediferous day and enjoyed the company of friends and family and stuffed their faces in the typical American way.

This truly was the best Christmas yet, which is saying a lot because for my 10th Christmas I got a pony!

It was special in several ways. For one, The Boy spent Christmas with our family. He's a Tennessee transplant and couldn't get extra days off to see his fam, and it meant a lot to spend such a special holiday with him. We have a semi-long distance relationship and I only see him on weekends, so that was immensely enjoyable. Second, my BA brother bear was able to make it home for Christmas. We just went to FL to watch him graduate from TACP school (aka total badassery, seriously, click the link) and it made my YEAR that he was able to stay for a few days before beginning other training. He will be moving around to different bases to complete training before he gets deployed, so I'm sure you can understand what a blessing it was to have him here. Thirdly, one of my best friends from OH got engaged and asked me to be in her wedding. OF COURSE I said yes. Plus, open bar. Lastly, FOOD! So much food.

In the realm of gifties, I was super surprised and grateful for everything. My family seemed to embrace my horsey nature and I pushed my Dover Wishlist HARD. Seriously whoever invented that is  saint. Non horsey people dont know shit about equestrian wares and Dover made it a breeze!

Also, my Secret Santa's gift was a total and wonderful surprise. I mean, I knew it was coming, but I didnt know who from and what it was! I LOVE this idea and can't wait to do it next year. Such a cool idea.

I felt like a kid again when I received TWO packages in the mail and a card from my Secret Santa.

Super intrigued at the gorgeous boxes I ripped them open like a 7 year old! 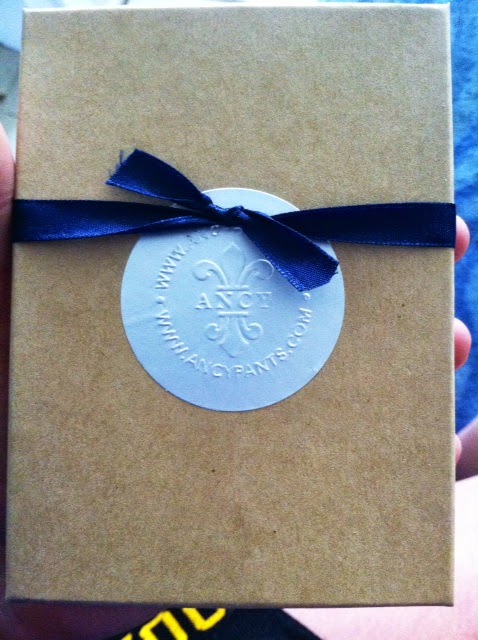 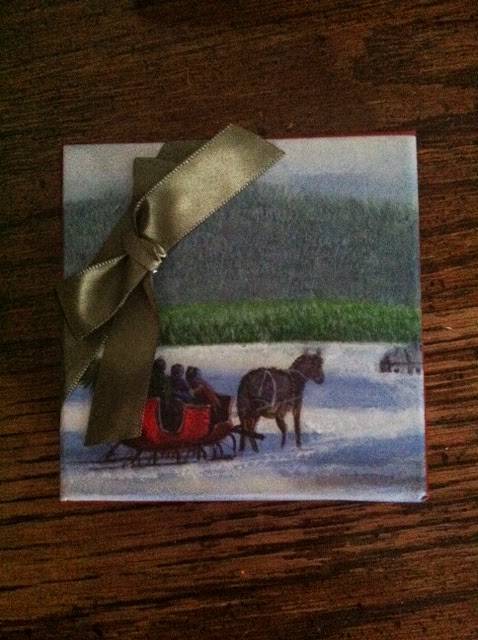 My Secret Santa was Nicole & Murray from Zen & The Art of Baby Horse Management. Surprisingly I wasn't yet following her, so not only did I get thoughtful, beautiful & amazing gifts from her, but I now have a new blogging friend! YAY FRIENDS. If you havent followed her you should; I stalked her page and not only is her horse a baby (love babies and the adventures) but she has stunning photos. Really really neat.

Inside the boxes were four little trinkets. Perfect and gorgeous trinkets. I could tell Nicole really took some time in searching for great gifts that fit me. 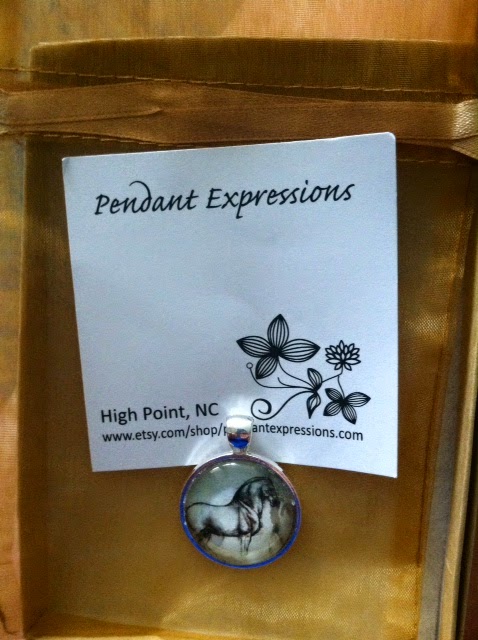 In the brown box was a stunning pendant of Da Vinci's horse. ONE OF MY FAVORITES. In college, Da Vinci was one of my Master Study subjects and I fell in love with his style. Google "Da Vinci Horse" and you can see all of the beautiful drawings hes done on horses. For one major project we had to replicate 2 Master's art. I chose the Da Vinci horse, of course, and one of his human studies. I wish I knew where I put them!

Its like she knew me or something! I'm so in love with this and have to think a little on what I want to do with it. I know you're supposed to wear it as a necklace, but I might make it into a bracelet. So. In. Love.

Second box was full of fun, shiny things as well! 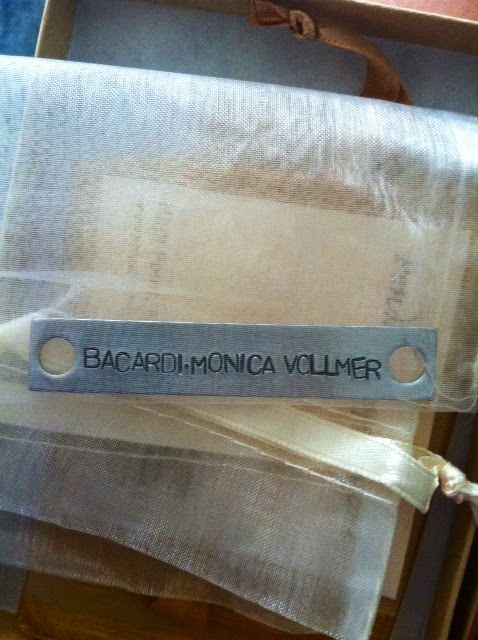 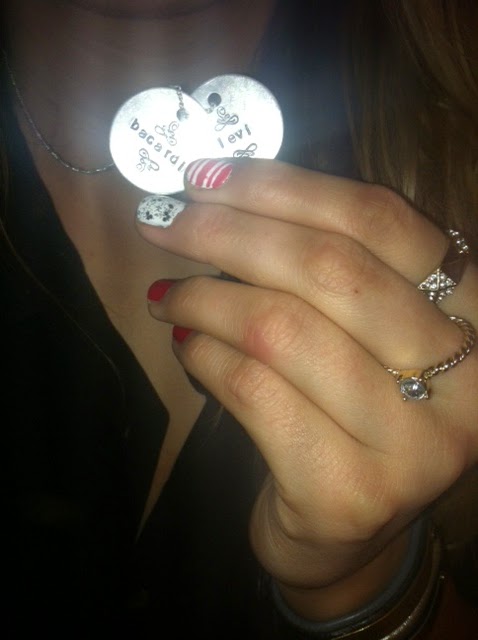 I'm not sure if the Bacardi and Levi tags were meant to go on a necklace but thats what I did with them!   I loved the idea of the animals wearing them, but they were too gorgeous for that so I put them around my neck. That way I can keep my boys close to my heart all the time! Also I'm assuming the Bacardi plate is for a bridle, which is where its going! Nicole did an awesome post about her Etsy shopping for me and I think you all should take a look! I think I need to get a few more tags because they are gorgeous and I LOVE THEM. Thank you Nicole!!


Not to take away from Nicole's gifts, I just have a ton of posts in the que and wanted to knock out the Christmas deal now, I got some other pretty sweet equestrian gifts from the family. My brother got me 2 pairs of breeches I really wanted and bit guards. The Boy got me the composite stirrups I've been drooling over and the Gina Miles Waterford Wonder Bit for Bacardi. The rents got me a new muck fork (Seriously, I was so stoked for that. My old one was TWELVE years old and dying), a beautiful Italian Leather riding belt, Michael Kors phone case and D&B wallet as well as some money to pay for those pesky adult things. German Rider got me some breeches (can never have too many!!) and I haven't yet gotten Wondermare's Mom's gifts but I'm sure they will be perfection because she knows me better than anyone.


All in all- awesome, thoughtful and USEFUL gifts. I am always just grateful to spend time with family and friends, so gifts are the icing on the holiday cake! I also LOVE giving gifts and making people happy! Christmas in general, really.

Did any of you receive something truly amazing or useful this Christmas? What are you thankful for this season?
Posted by Checkmark115 at 3:01 PM 10 comments:
Email ThisBlogThis!Share to TwitterShare to FacebookShare to Pinterest

So many things to discuss and people to thank regarding my last post, but right now there are bigger things at hand...

Like the standard "Heres My Equine In A Santa Hat" pic dump. 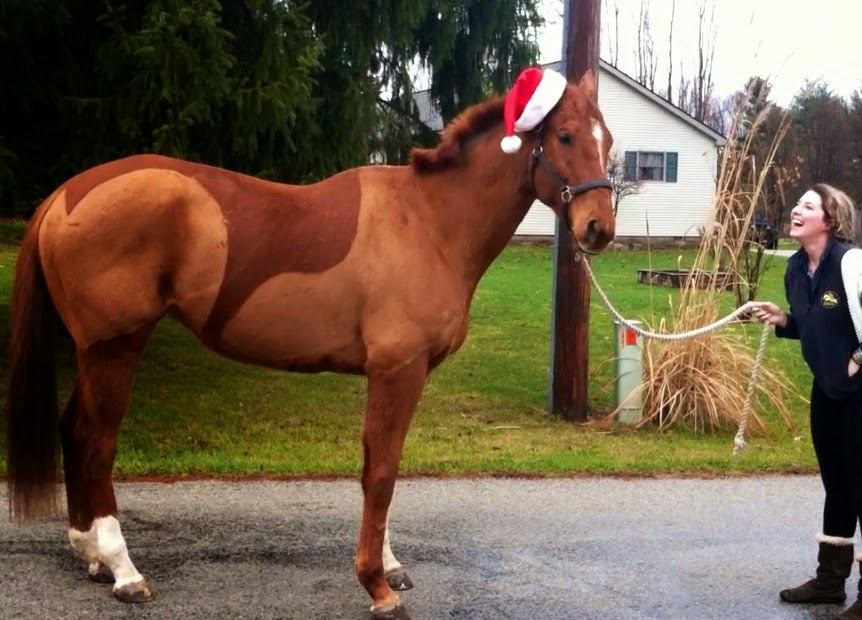 Posted by Checkmark115 at 9:05 AM 6 comments:
Email ThisBlogThis!Share to TwitterShare to FacebookShare to Pinterest

As far as weeks go in winter, its been a semi-productive, almost OK week.

With the exception of my horse. And the rain.

He's a mental case.. and it sucks.

I know I said I "figured him out" in the last post. I sort of did. I figured out HOW to fix his naughty insanity, but not the WHY.

I doubt there really is a why that I will ever comprehend/be OK with/accept, but I have a few ideas.

Before I address his constant bastardly behavior, I would like prove we are indeed working, with a few rather horrible lunging pictures.

NOTHING is worse than lunging pictures. They all look the same and have the ghastly white line in the frame and they're just dumb. But here they are. Because pictures. 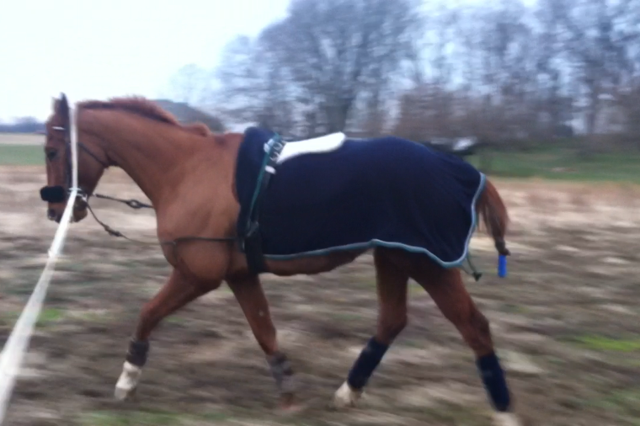 That day (pictured above) he was a 2x4 but at least not bat shit crazy. He was listening and seemed to remember our break through from the day before. Mild spooking episodes but in general not dreadful.

And THIS day (pictured above) was TERRIBLE. Those pictures were taken 30 minutes into our session. I literally NEVER work a horse more than 20 on the lunge. I just dont. But I did yesterday because I refused to end terribly.

I always start our sessions with no sidereins. I generally believe that they need a good hideous warm up before being asked to do any sort of real work. But thats just like, my opinion.

Super important with the babies. They tend to have episodes and fixed reins can be dangerous in that situation. (Lets face it, theres always a risk using them, but more so with fresh babies)

In this case, Bacardi had many episodes. ONE could actually say it was a 28 minute show. Apparently Lunge Like A Complete Bastard Day was a double holiday for him.

I shit you not, he would spook vivaciously LITERALLY every 30 seconds. AT NOTHING.

We are talking, head up, butt down, scooting, bucking, galloping spook.

I was getting so frustrated. SO.

I would follow him when he spooked so as not to jam his face, but he never stopped & would just take the fuck off like

For seemingly no reason. AT. ALL.

Why and what in 5 lb 8 oz baby Jesus's name would a horse be spooking that much?

After his maniacal spooking session he finally chilled out "a bit" and I felt comfortable lunging with loose sidereins. At the trot he was a gem for the most part. I didnt even dare ask for the canter in case he felt like I was giving him permission to run off like a brain damaged citizen.

I've literally laid awake at night trying to think about it. He just recently started doing this about 4 weeks ago, every damn ride/ workout. When he does it its not a reaction from an aid or cue, it is literally about nothing. He will be waling along and all of a sudden BAM, gone. There is no reasoning. Hes had his eyes checked and his teeth checked too.

Truly, perhaps winter is just not his season. Maybe hes too fresh and its too cold and hes just too much of an ass in winter. His old owner said he was barely ridden outside in winter. Which woudl explain why hes a gem indoors but not in our muddy field or out hacking. Perhaps he really is scared of it. What "it" truly is, I have not a clue. Perhaps its the alfalfa making him spurt around like Satan Spawn. I started giving it about 4 weeks ago. Perhaps he really has gone mental and there is no real explanation for it. My mother thinks Yankee leaving broke his brain. They were turned out together and stalled near each other. Lilly is here, but in a separate pasture half the day. Maybe Yankee was his stabilizer...his chill pill...his goat. Legitimate thought.

I am at the end of my rope though.

Its making any progress impossible. Along with the rain and mud *I* might go mental too. He will be going along great and then just explode and lose his mind.  Coming back down from that takes another 5 minutes IF he doesnt spook again during that process.

Its getting unmanageable and I want to pull my hair out. I've tried everything. 4 different saddles, no saddle, cleaner pads, no leg boots, different bits, no bits. There is no difference. He wasnt doing this before with his normal tack though during summer and fall.. And now he is. And I have zero answers.

And I hate it.