Bought in 2014, its officially been TWO years since I brought him home!

I  acquired my shiny penny in late May of 2014. But I've known of his existence much longer &  have been obsessed since day one. I'm sketchy on his backstory and since I only knew his owner through FB I also don't know the precise details on HOW she acquired him either, but I knew I was in love.

Known on the track as Ghost of Windhaven and in the barn as Bacardi, he raced 13 times, won twice and earned $11k. I personally loathe his JC name so I changed that immediately with USEA. Anejo Highball is a Bacardi drink in case anyone is wondering ;) 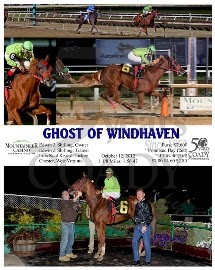 I stalked  Bacardi on FB perilously for months, drooling over his height and conformation and DAT TROT. I was CRUSHING hardcore on a horse.

I watched his progress  with his four year old self and continued to fall more and more in love with this big guy. Everytime his owner posted a new pic I would swoon and tell her how much I loved him. I knew that horse was special from the moment I saw him online. 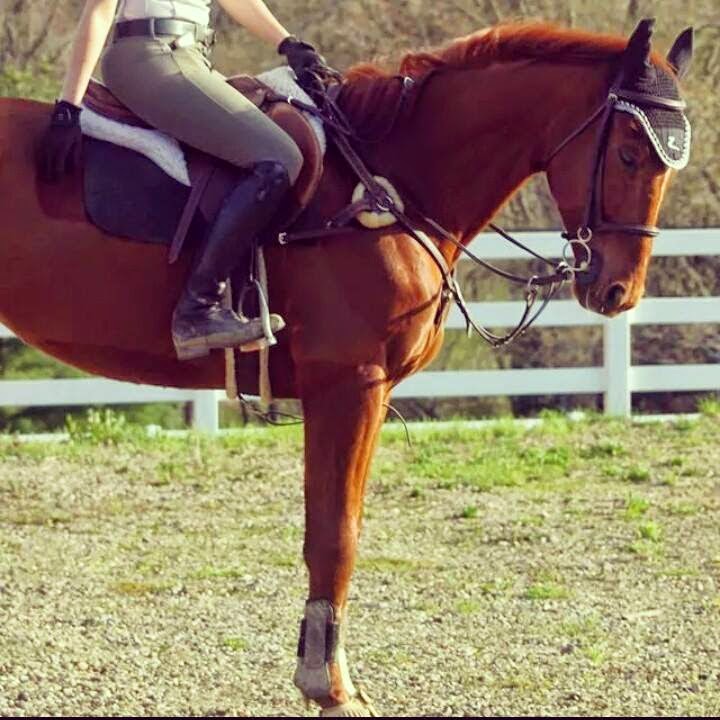 She even took him to a show AND started jumping him before I bought him, which was really cool 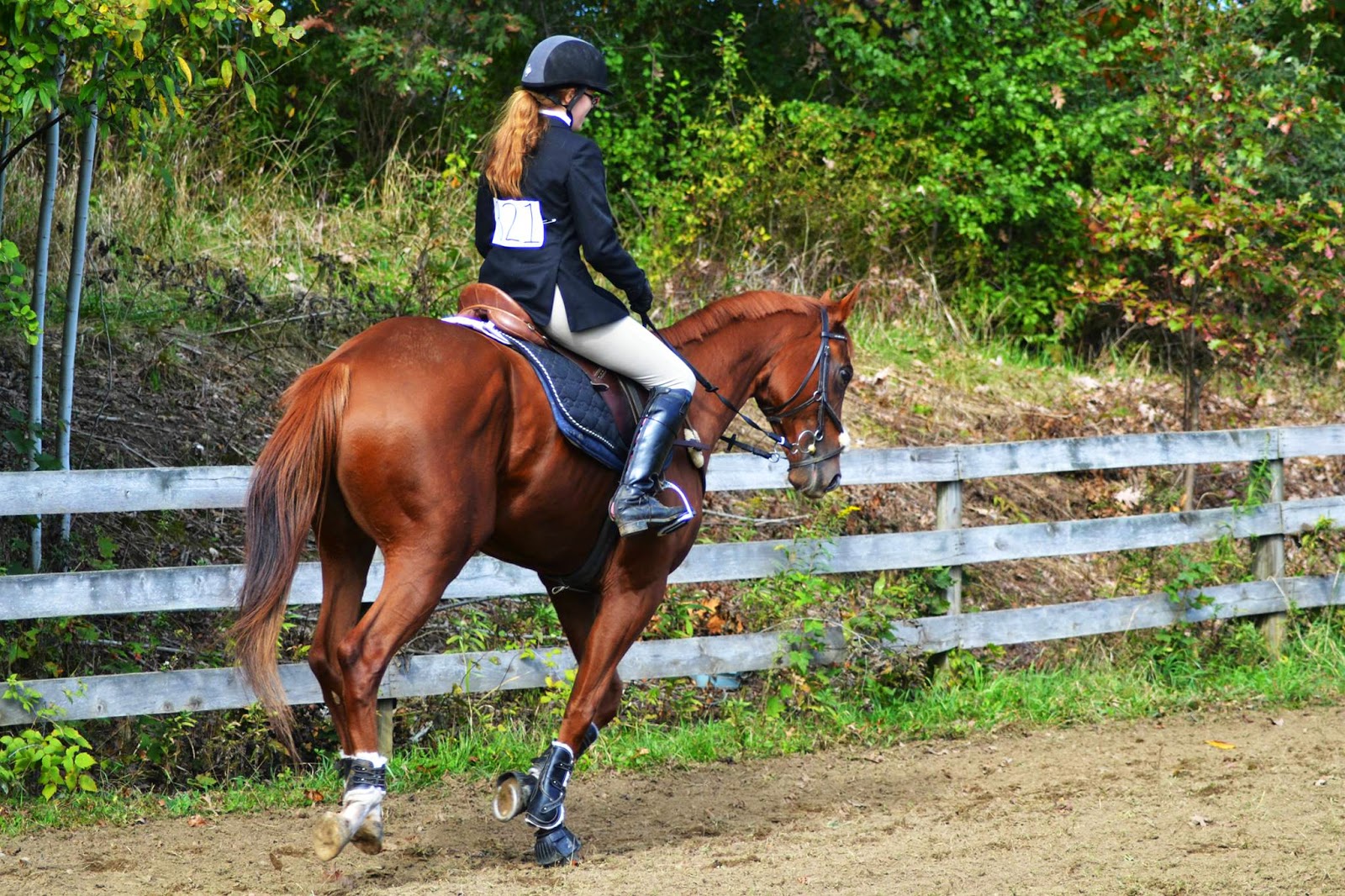 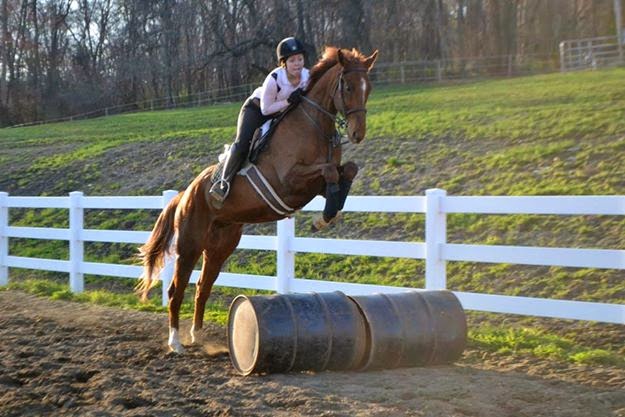 And then in May, when I told her I was moving back to Ohio she informed me he was for sale. At first I didn't believe her. And then I said something along the lines of- "yeah, I want him. Give me a few days to be sure, but take him off the market. He's mine"... and the rest is history. I couldn't let a horse like him pass me up, and I have yet to be sorry about my hasty decision!

Two weeks after that conversation he was in my pasture in Ohio after a whirlwind of moving and juggling plans.

It was an interesting first year with him, trying to figure out what made him tick and what he was best at and his dislikes. Finding ourselves was rough and tumultuous, and for a while I wasn't sure I made the right decision in buying him. I knew he had the talent to go far, but I wasn't sure if he had the mental stability to do so.

For the first 6 months with him I focused on getting him to gain some weight and be comfortable with himself at home. He had a nasty habit of rearing and kicking, which was unacceptable but understandable knowing his racetrack past. Yankee helped a lot with that transition but in Nov of 2014 Yankee went West on a lease and Bacardi had to grow up a little on his own.

Our training time was limited due to my work schedule and living situation. Bacardi was a very special thoroughbred with varying opinions about footing as well. Therefore, riding in our only field available to us proved difficult and he resisted almost every step of the way.

Then, with his obnoxious  habit of lashing out with hind feet, he nailed me in the thigh when I wasn't paying quite close enough attention was horribly injured. Recovery took months and he pretty much sat in a field until late fall, occasionally getting lunged or worked with clicker training on the ground.

To add to that, he had some tough times trailering. I personally have never worked with a horse who was so defiant about loading and he injured himself so often that I put the trailer training on hold until I figured him out some more. To fast forward, he just needed LOTS of time to realize trailering was no big deal and he finally started loading without much resistance in Sept of 2015, more than a year after purchase.

Honestly though, that period of about 7 months was the best decision for him. It gave him time to decompress and realize that I was friend, not foe.

Riding wise, his training had been inconsistent at best before my injury and he was wildly out of control for the most part. I never felt like he "showed up to work" and was more intent and creative on  dangerously evading me, than learning anything new. We fought a lot and our good days were few and far between. Also, he battled with accesses and minor injuries for what seemed like ages. The inconsistency was fierce.

I know the talent was in there somewhere, but we were still not communicating effectively as a team. I still didn't have him figured out and he literally couldn't mentally focus on anything but evading me.

In July of 205 I took him to an event as a NC, but realized that he was not ready to be a show horse yet. He tried his best to be a good boy, but truly lost his sanity in the warm-up rings. Back to schooling shows! 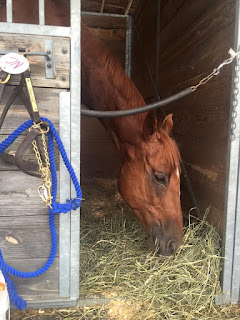 In September of 2015 I made the huge decision to sell off my other trail horse and move B to a full care boarding barn with all the amenities. This gave me more time to ride and the facilities to support our goals (aka an indoor & outdoor arena)

Since then, he has completely changed as a whole and I know that was the best decision I've ever made for our partnership. Now he fatter and healthier than ever, more relaxed in all situations and happy to be ridden and worked with. He no longer kicks or rears, after months and months of groundwork at home and the new barn, which is fantastic and also finally comes when called in  the pasture instead of running away (cookies are great bribes). He loads in trailers (massive win), halters (was head shy), clips (HUGE deal) and will stand for the farrier. We just got over breaking our halters in the wash rack, but I think that about covers checking off ground work manners. 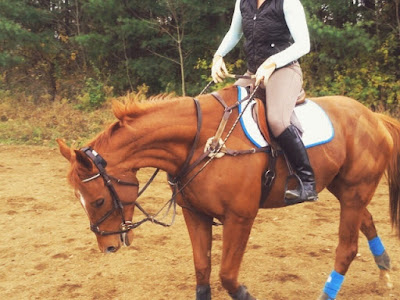 In just a few months he went from wild and dangerous under saddle to rideable and trainable. I FINALLY had a GOOD place to ride with solid, even footing and the TIME to work my horse. It was like moving him solved al my problems!He never got injured, I always had time to ride (even after dark) and there were tons of toys to play with (jumps, dressage rings, XC field, etc) and keep his interest. We worked our butts off for months and he finally started to mature a little under saddle. 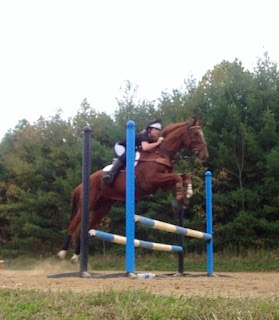 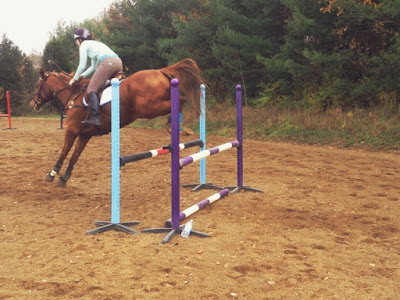 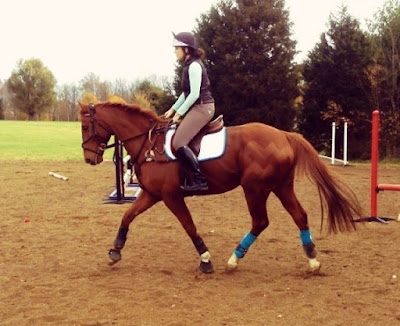 He started to figure out flying changes, is learning how to carry himself and that lateral work isn't evil. He proved that 3'3 and 3'6 is cake for him and we wrapped up the year with a jumper show and came away with some satan in the 2'6-3ft jumper divisions! 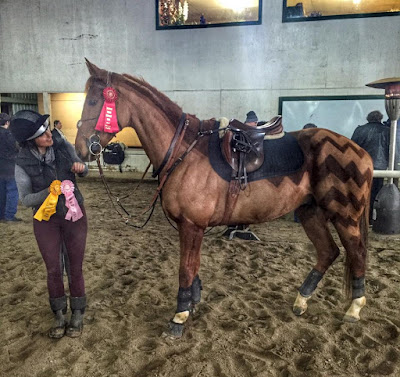 Early 2016 was a trying time again, and we hit some bumps along the way. Winter is not Bacardi's favorite season and he is extremely difficult to deal with when the mercury hits below 30* 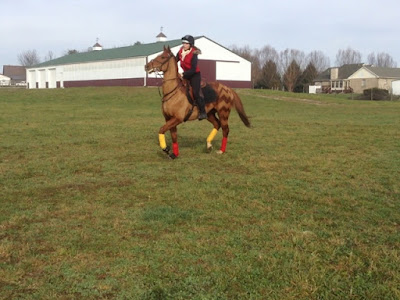 Some days we could work through it, others, not so much. Those days were the worst. I felt defeated and overwhelmed by his attitude and felt like we were revisiting our first year together. 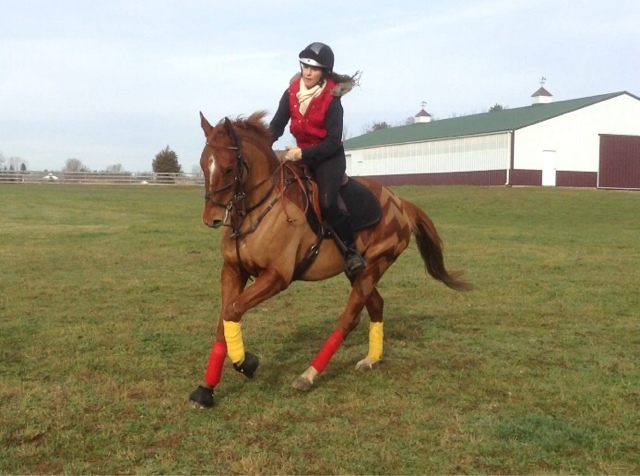 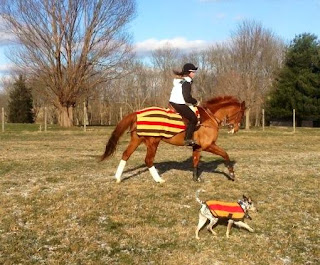 However, winter turns to spring and spring leads to warmth! As soon as it began warming up, his attitude went away and we finally were able to put some more work in.

We buckled down for the big show season I had planned for his 7th year. I had carefully budgeted and planned, now all we had to do was conquer! I also had started him on a regular regime of body work and his flat work was really improving. 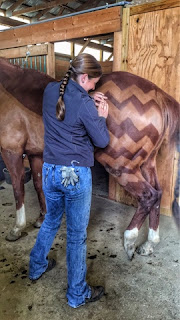 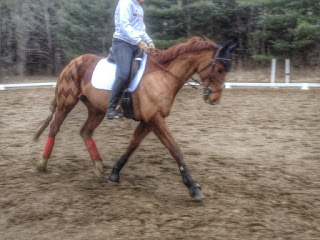 However, after cross country schooling a few times, it was apparent that B was NOT a huge fan of it. He refused every fence at least once, possibly twice and was never confident about the jumps outside the confines of an arena. I also have a healthy fear of anything larger than a BN jump on XC so us together wasn't exactly the dream team (I used to actively compete at Training level and had 1* aspirations, so who knows where this fear developed).

Therefore, had my trainer ride him for the entire month of April, since I was admittedly swamped and overwhelmed with my decision to return to school, my fear of XC and working full time. 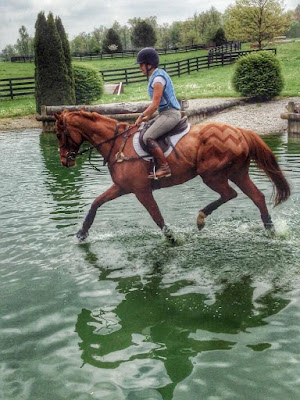 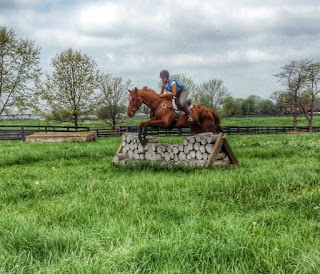 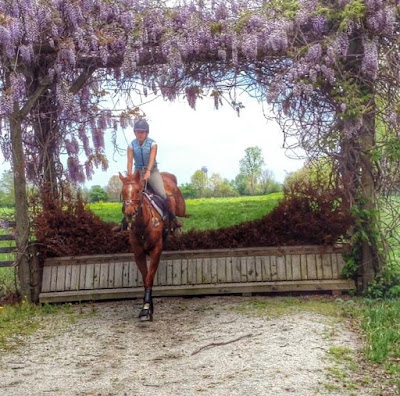 She was having better luck cross country, but it was easy to see he still did not enjoy it much.

Regardless, we tried one recognized event with my trainer piloting. XC was actually cancelled at that show and with a TE in showjumping I pretty much took that as a sign that eventing was not the direction we should be heading at THIS exact moment in time.

With that, I changed focus and "switched" to show jumping.

Bacardi happily went along with it and I think we both breathed a sigh of relief knowing that XC was no longer something of focus.

Perhaps someday we will return, but for now, I am quite happy to play in the sandbox.

Dressage will always be a passion of mine and I love competing. I hope to get B trained and competitive up to 2nd level and hopefully get my Bronze Medal. Considering I have YET to show him once in dressage though, this is a far off goal for now. 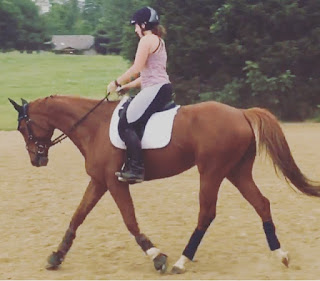 In June, we did revisit XC a little, with more success, but its still not very fun for either of us so it will remain on pause for a while. 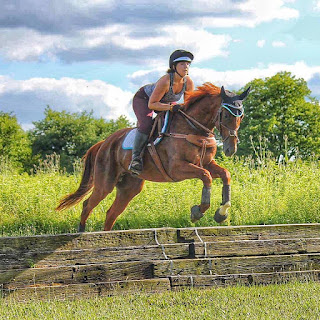 Showjumping will always be fun for me and we are content to continue our education over the stick jumps. Eventually I would love to show him in the 1.2m division, but for now we are formulating his base and sticking to under .9m 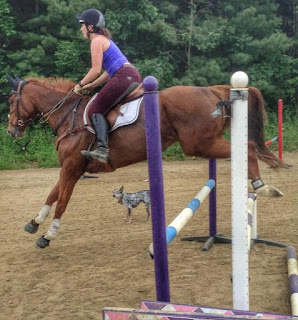 This year has been a weird one, and one where we have battled shoeing issues literally most of the months of May, June and July. Training and soundness has been incredibly inconsistent, but when he's sound he always puts his best foot forward. I also discovered that he really likes to jump in the hackamore, like Yankee, so thats been a fun adventure! 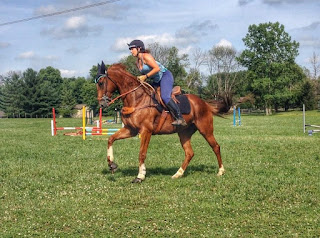 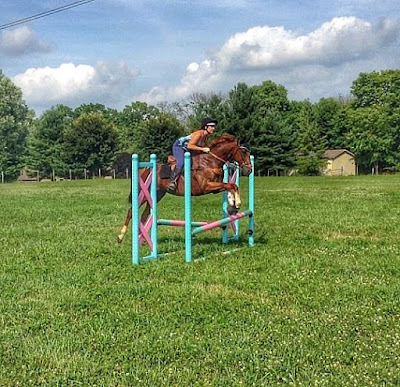 I made the decision to try an keep him barefoot after the incredible talent he proved to have for throwing shoes, so that is also a work in progress.

I also injured my back badly at the beginning of July, so we've been weirdly sidelined with all the best intentions to show. A few friends had been riding him on and off in accordance with his soundness as well which was really helpful! 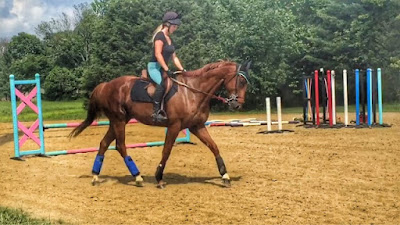 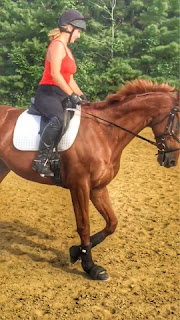 Hopefully (fingers crossed) August will be a better month for us both and we can get back to our sandbox dreams! 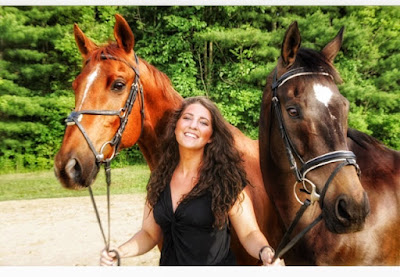