I know, thats not the saying. But, thats what happens when you own an OTTB.
He never fully regresses; he will be brilliant one day, and hardly remember anything the next time. He never goes full on tard, but he gets close.
I think I tried to teach him too many things at once (sidepassing, counter canter, flying changes, extensions, etc) and he got his lil' TB brain is a twist and regressed slightly to retarded 5 year old stage where he cricks his neck, stiffens up in the shoulders and refuses to move forward.
Silly pony.
For a while (May-present) he was progressing so quickly in everything I presented to him, I kept thinking to myself, "this is too good to be true." It was.
Taking lessons againhas really helped us, and Liz has given me a few tools to work with him on loosening his neck , jaw and shoulders. I tried them out Monday, after our Friday lesson and he was MAGNIFICENT. Absolutely wonderful! I was beyond elated and stoked that we *finally* worked through a major issue without falling back in our training.
Fast forward to Wednesday.
He barely remembered a thing, it seemed. Still stiff, still "stuck" in the front and just outrageously ridiculous. I was getting SO frustrated. How can he be this inconsistent? Even during the ride, he's have some great moments, but then start tripping everywhere, falling in or out, throwing his nose up, and disrespecting my aids. He just kept getting more and more tense and it took all of my willpower ( I literally was telling myself, relax, relax) to not get tense too and carry on.
Partially, I think it was the weather. It went from 80 to 40 in 6 hours, and the last two days have been rainy and gross, so he stayed in (no haircoat!) and the nights have been rainy/gross/33 degrees. Missouri weather blows.
So, here I am...confused and frustrated.
Wondering what could be causing this...I have ideas.
*TB brain
*cold weather
*saddle not fitting?
*bad riding
*lack of work (3 days a week)
*it was dinnertime
*grumpy in general
*...... 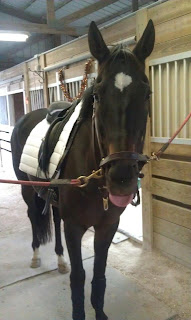 At least he is still adorable.
Posted by Checkmark115 at 11:18 AM 15 comments:
Email ThisBlogThis!Share to TwitterShare to FacebookShare to Pinterest

It is finally chilly here in good ole' Missouri at 41 degrees this morning! Forecast: fricken cold at night and not much warmer during the day....YAY!
I am super stoked because it has been 80+ since the beginning of October and its messing with my equilibrium. My body craves sweatshirts and long pants and HOT coffee and long hikes and trail rides in the woods and fuzzy horse necks...but in 80 fricken degrees that is impossible.

Everyone (who loves fall) is miserable. Sweaty, hot and disgusting is just not awesome when all you want is to bundle up and be cold :) I'm awkwardly weird, I know. 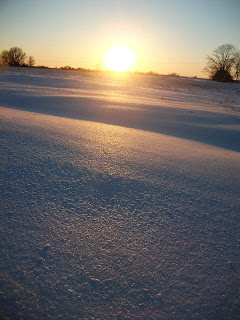 I am NOT a hot weather person. I LOVE fall, and am madly in like with winter. Save for February. February is the most pointless month of the year. Nothing fun happens in February, and by that time, even I am sick of wintery snow and icey grossness.

I can't remember a time when I didn't love the cold. There is just something wonderful about a deliciously chilly morning at the barn...watching the horses' breaths poof out of their fuzzy noses; appreciating the brilliance of the firey leaf colors, or the sharp blue quality of ice and snow; loving the sound of horses munching hay, all warm and toasty in their stalls or paddocks; hearing the crunch of leaves or snow underfoot; feeling absolutely cold, but ALIVE! 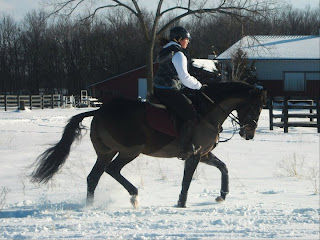 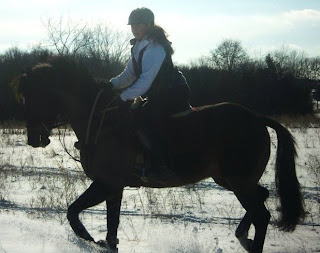 HOW IS THIS NOT AWESOME?!

I think thats why I love fall and winter so much...I feel SO alive! I can't describe how much I appreciate life in the winter. Maybe its because, for some wildlife, its a daily struggle to stay alive and I appreciate the fact that I can be warm and my horse is well fed and warm as well. Or maybe its just the absolute beauty that is fall and winter. To me, Summer is FUGLY...brown grass...thunderclouds in the sky...sweaty beasts and people. Gross.

Plus, I freaking love hot coffee, piles of blankets, soup, fireplaces, hoodies, winter boots, thick socks, bathrobes, dog sweaters, christmas trees, sleigh bells, snow, scarves, and fuzzy horse coats. None of that is possible in summer! What do I love in summer? Air conditioning. Thats about it.

Speaking of fuzzy horse coats, Yankee is slowly growing his in. And by slowly, I mean it basically just stands on end right now and got a titch thicker. No real length growth has been acheived. TB horse coat fail. Good thing his momma loves him and has blankets for him when temps drop below freezing this week.

In other news, been doing a bit of dressage work...bareback. I think I am just gonna go sans saddle for a while, I'm really liking it...its giving me some wicked abs. Been working on getting silly TB to relax at the trot and get some beautiful transitions. Sucks not being able to rid emore than 3 days a week, all in a row, so I am going to try to make time for him today and wednesday, as well as the weekend.

In other other news...I've been artsy!! I'm trying to get people's portraits done like I promised, but since I'm just doing sketches, for free, they are low on the priority list, lawl. However I did do one of Miss Gogo for Andrea, SprinnklerBandit and my friend Sela... also uploaded a pic of my first project for ya'll to see...finally. 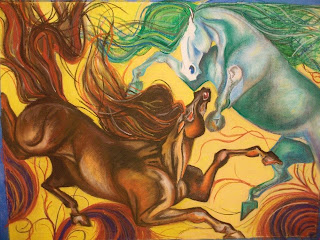 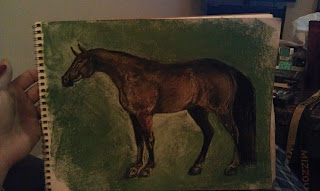 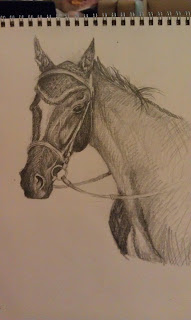 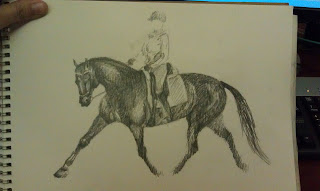 Chance, for a non-blogger friend, Sela 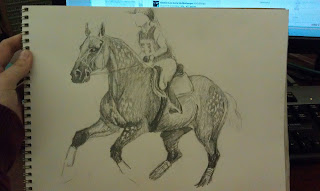 Have a splediferous Monday and don't forget to hug your horses :)
Posted by Checkmark115 at 9:42 AM 7 comments:
Email ThisBlogThis!Share to TwitterShare to FacebookShare to Pinterest
Newer Posts Older Posts Home
Subscribe to: Posts (Atom)