I Hate Everything, Give Me Chocolate

I'm totally OK with Yankee being a nudist. Its actually so much easier in all ways besides blanketing. If bipolar Missouri would just decide if it wants to be 18* or 70* I wouldn't have to come out 3 times a day and change blankets.

Yesterday was so freaking warm though, that even fully nude, he was super sweaty. Could be that I worked his bum pretty hard with a demanding course. I'm trying to keep him in regular work because *cross fingers* I would like to compete in February.

I set up a line of bounces, an outside line (3 strides) of verticals, a 2 stride line of oxer-vertical-oxer and a free standing vertical. I jacked the oxers up to 3'9 and kept the rest at 2'6-3' and did work.

He was ridiculously abhorrent at first. I was also PMSing and everything even slightly irritating made me want to kill him. 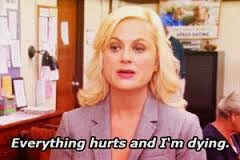 My pet peeve is head tossing and Yanks was doing everything in his power to righteously piss me off. He was doing that stupid head toss thats like, crazy. Where they flip their nose up and down really fast about 20 times. OH MY FUCKING GOD I CANT STAND IT. He only does it every once in a while, and for the love of god I can't figure out why. But it starts in the cross ties and doesn't stop. 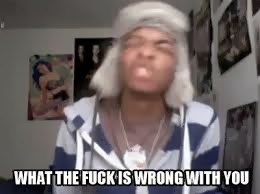 Seriously I almost went back inside and got the damn running martingale and cranked his nose to his chest. But I know better than that. But I still thought about it.

We did lots of leg yields and pole work and that mostly distracted him from being an asshole. I continued to be annoyed.


Once he kind of sort of settled  I got some nice work out of him. He was still pissy about changes and slowing down of any kind, but I gave him BIG praise for not blowing through the bounces. BIG praise.

Sorry for the delays, I'm videoeing myself. Obvi. And you can't see me jumping the other lines. THE STRUG IS REAL.

But aren't his little legggies so cute? I love his grunts too. Bounces are hard!

I used the bounces to set up for the lines and it seemed to really help him engage and rock back! I also was intently conscious of my body and tried reeeeeally hard to stay still. Slowly but surely improving. I don't really know why my eq disappeared. 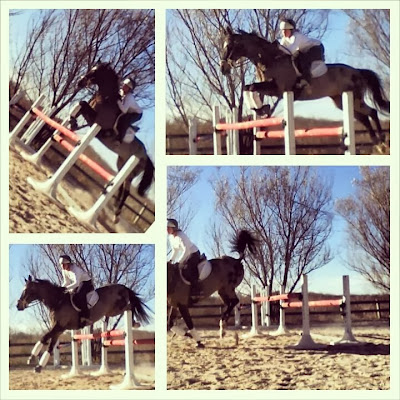 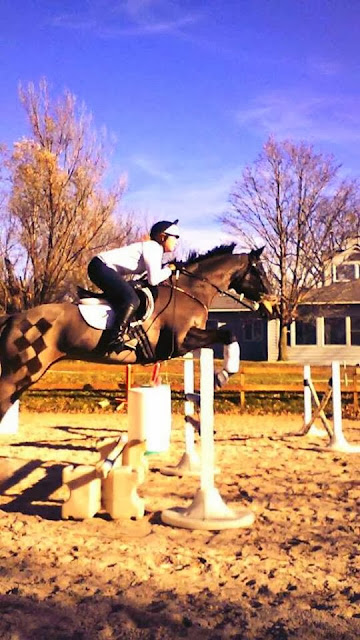 I hoe you're enjoying these pics because it was a bitch to acquire them.

I don't know if you guys know this, but taking video's of yourself is undeniably one of the hardest things to do. Like, I'm pretty sure. I almost stomped on my phone and beat my horse because he continued to be a jerk on the ground and would toss his head into me, thus my phone would tumble to the ground after I had perfectly arranged it on a standard. 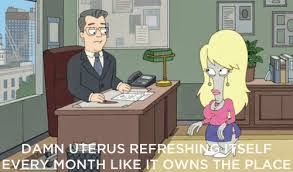 About a thousands tries later though I go this thuggin reel though...

Gonna toot my own horn here just a bit and say that this might be one of the coolest things I've seen in a while. And it was not easy to get. BUT SO COOL.

This isn't the greatest, most cohesive post in the world but I've had a stressful 2 days and maybe I'm slightly intoxicated because I'm still pissy and just want to drink Christmas beer okay?
Posted by Checkmark115 at 10:41 PM 6 comments:
Email ThisBlogThis!Share to TwitterShare to FacebookShare to Pinterest 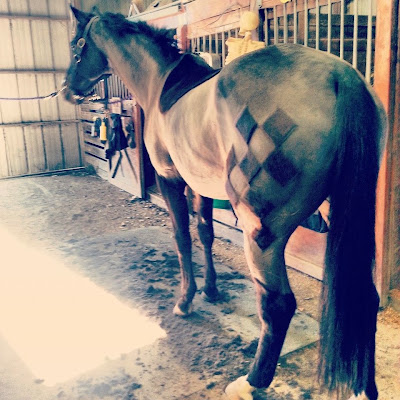 But in all seriousness, I did not mean to make him naked. But I majorly effed up his checkerboard.

Do not, I repeat DO NOT attempt to freehand designs. You are not good enough. Get tape.