Yesterday was not only the fourth of July, a holiday I halfheartedly celebrate (Never been a fan of fireworks...reminds me too much of thunder-which I am deathly afraid of. Plus America was born over 200 years ago. Over it.), but it was my anniversary with the boy. I mad ehim come to the barn >:) He's afraid of horses, so its really hard to get him to come but he videoed some jumping for me! It went SUPER DUPER well.


Yankee was absolutely perfect, even though there was a storm brewing and the neighbors were lighting off fireworks. Simultaneous distractions. The horses in the pasture were freaking but Yanks gave zero fucks. Reasons why I love him.

He was SPRING LOADED yesterday and I had a hard time getting him to lift his knees over anything that wasn't at least 3'6.. 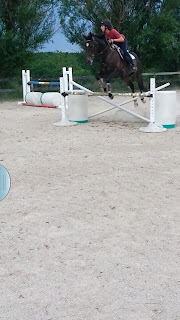 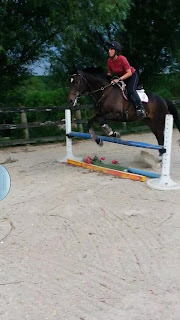 But he was exceptionally light in the bridle and and quick to turn. It was a great ride. 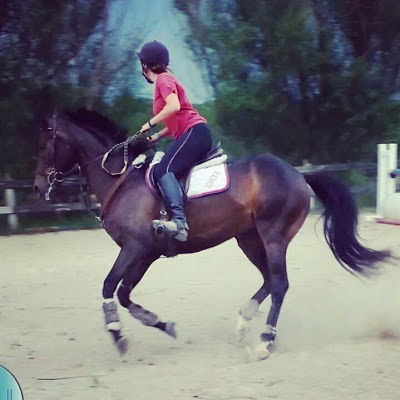 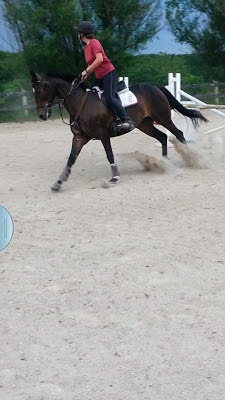 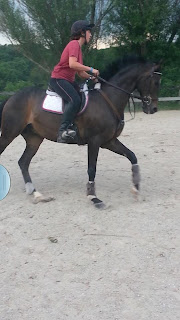 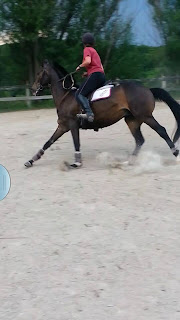 For not having jumped in over 2 months (besides out little jaunt last week) he sure surprised me with good behavior. I was having a little bit of a hard time with my eq. but he tolerated me and put forth some very good efforts over some bigger fences.. 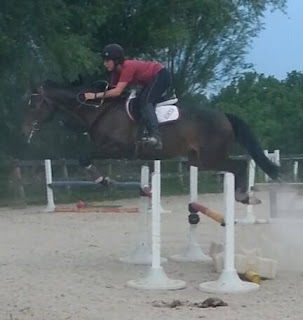 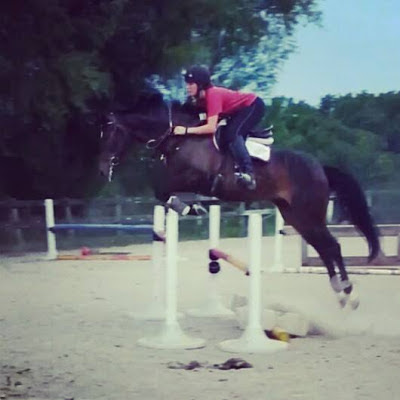 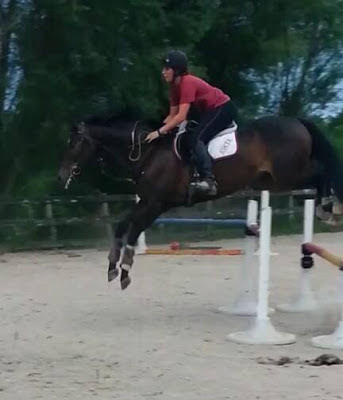 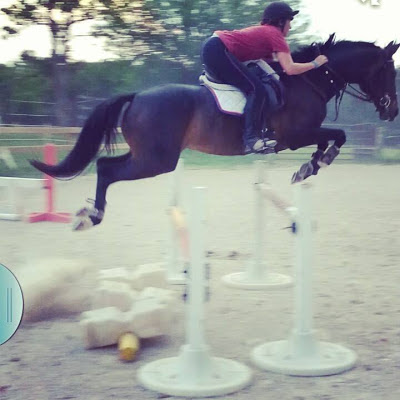 I love this horse. 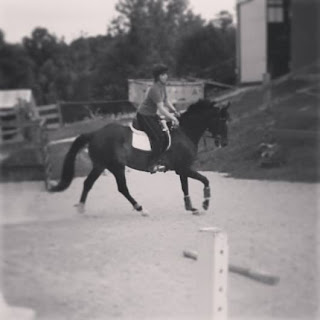 I have some big news to explain in a few posts. Don't get too excited, its nothing very exciting, just big. Also, Yankee is getting ridden this weekend in a 2 day dressage clinic by a teenage girl who's horse is still lame. She came out and rode him this AM and Yankee was on his bedt behavior, so I hope it goes well!!
Posted by Checkmark115 at 10:40 AM 7 comments:
Email ThisBlogThis!Share to TwitterShare to FacebookShare to Pinterest


In case you didn't already know my horse is an absolute flamer for boys. He is the most gay for geldings. I am okay with this and accept him for it because I too dislike most mares. They are too moody, and apparently Yankee agrees with me.

This week we got a new boarder and he just so happens to be a sexy young OTTB with some cool coloring...and Yankee has fallen hard in love with the boy named Smokey. 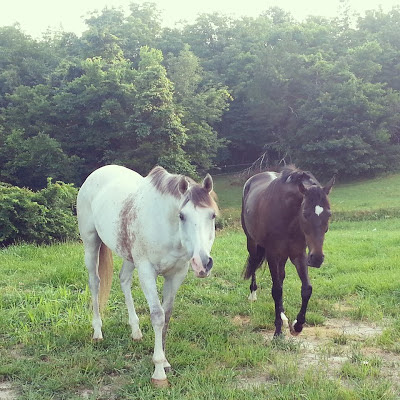 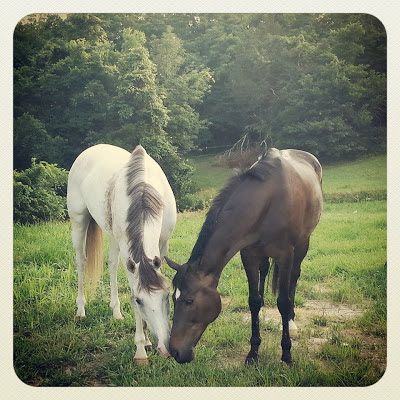 They are absolutely adorable and already never move from the others side in the field. 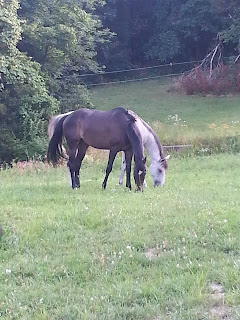 I've never seen an Thoroughbred with Smokey's coloring and I learned they are called "bloody shoulders". A little gruesome, but OK.

He also eats more than any horse I've ever met in my life, and Pronto was massive. 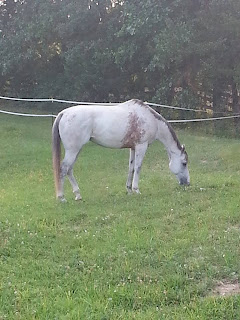 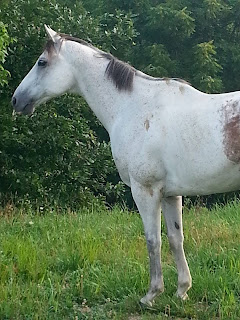 ON the non-Yankee-relationship front, I've ACTUALLY been getting up early to ride. Yes. I have. Its been going quite well too actually. Been on a few hacks, one slightly bad jump school, and a few phenomenal flat sessions. He's been SUPER relaxed through all transitions and loose in his back and light in the bridle. Which is a pleasant surprise. The jump school I'd rather not talk about, but we are trying again on Thursday ;)

Which is my one year anniversary with the boy, by the way. I know that its "only" a year, but I've known him for four years so it seems  longer. He's so great. 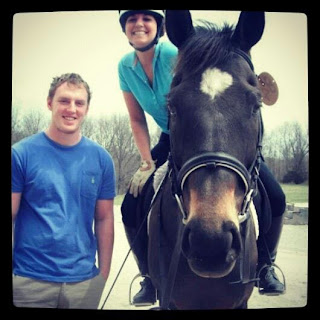 I also feel like I should share the product of me leaving my horse and my job for a week to visit my rents in Ohio. Not only was it my mom's retirement form the Air Force ceremony after 30 yrs. in the service (She was a full bird COL, crossfit instructor and serious badass extraordinaire)....

.....but it was time for family photos. I HATE posing for serious pictures... 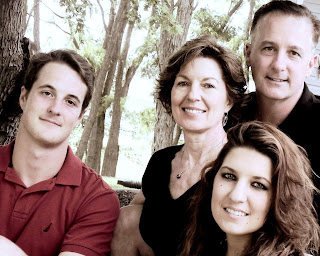 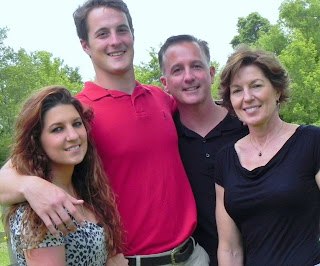 ...I'm so thrilled. Can't you tell? Doesn't help they all crossfit and I'm the fatty in the family.


And here's one of me and my stupid dog. I love him. 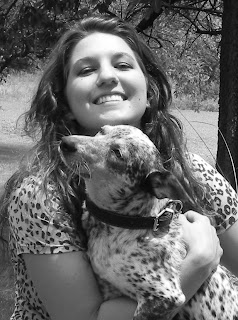 Pics friday, from jumping. I hope!
Posted by Checkmark115 at 3:33 PM 11 comments:
Email ThisBlogThis!Share to TwitterShare to FacebookShare to Pinterest

OK so without further ado, the second part of the Liebster award, which is harder than you think BY THE WAY....11+ blogs that have less than 200 followers. I picked 13 because more than a few were already nominated. I read them all!

All who were nominated, if you want to participate, you first give 11 random facts about yourself, answer the 11 questions I give you, make up 11 more questions and nominate 11 more blogs. Why the 11, I don't know.

My questions:
1.Which horse in your life has been your favorite and why? Leased, owned, ridden etc.
2. What is your fav/least fav thing about your current barn?
3. Biggest pet peeve?
4. What is the scariest horse related incident you've been involved in? (colic, trailer accident, etc)
5.  Post a pic of your fav throw back & why.
6. Netflix or redbox?
7. Tell us your plan of attack in the event of a zombie apocalypse.
8. Coke or Pepsi?
9. Iphone or Droid?
10. Favorite meal.
11. Biggest obession besides horses.
Posted by Checkmark115 at 9:03 PM No comments:
Email ThisBlogThis!Share to TwitterShare to FacebookShare to Pinterest
Newer Posts Older Posts Home
Subscribe to: Posts (Atom)