Sunday means lesson day in my world. If my trainer isn't at a show. And I'm not hungover.

Steady's mom and I hatched plan to jump lesson this weekend because we caught the fever. And she got her trailer. So it was on.

Our sexy gentleman trailered pretty well in her beast of a trailer and I've decided she's adopting me. She has no choice.

I still am in disbelief that we are friends and do stuff together now, after "knowing" each other online for so long. A true love story, if you will. We currently are hatching showing and lesson plans left and right for our pretyy red boys. Especially after this lesson. 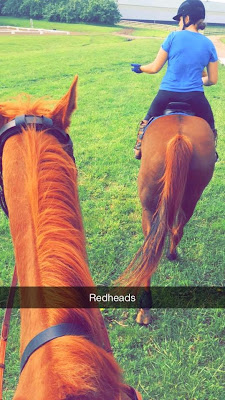 PerfectTrainer got us right to work on a rather tough exercise to "warm-up". Essentially its 2 very low jumps on a circle and you MUST use your outside aids (aka outside leg) to turn. OTTBs tend to fall in or out on the shoulder and this really helps them be straight and forward. At one point she even had us put the reins in one hand. Apparently way too dependent in inside rein.

The Boys picked it up after a few rounds, with no help from their potato sack riders. If theres one thing I learned today, Crossfit does not keep you fit enough to steer a 1100lb animal with one leg for 20 minutes. #dead

I'll let Amy speak for herself on her lesson, but mine was rather helpful. I wouldn't say it was perfect. But good. I discovered a few things about my horse today.

1) Hes an amazing animal.
1a) This horse can JUMP
2) He's a grade A asshole
2a) He can throw some rowdy tantrums

I had an inkling his attitude/issues over winter was partially something, partially him being a douche and I think we learned today that that is exactly it.

If something is scary to him, he will lock up and refuse. To be expected with a greener than grass greenie with a "new" rider. However, he takes our understanding of this and exploits it with refusal after refusal or, randomly refusing something he's jumped 27 times and is literally a foot tall. No. Just no.

Generally, he will just putter out after swinging his hindquarters in and just nope all the way to the base of the fence. Its not nasty, just annoying.

After doing well over the circle exercise, we pointed him towards the Oxer and He gave a hard nope to it. So we disassembled it into a plain X-rail. Which he took several times. Then we built it back to an oxer.

After a few really nice jumps over the small oxer, he hard refused it when we put the white blocks back underneath it. After  a few times, PerfectTrainer was like, "OK now he's just being a dick. Remind him nicely with a light tap why he's here with *this* dressage whip".

And all it took was two flicks, and he got the message. Literally, a tap and Bacardi had a 5 minute meltdown. 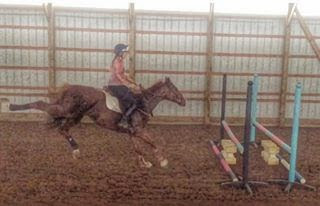 After gathering my young child back up and regrouping I pointed him back at the oxer, held the whip by his right side and... 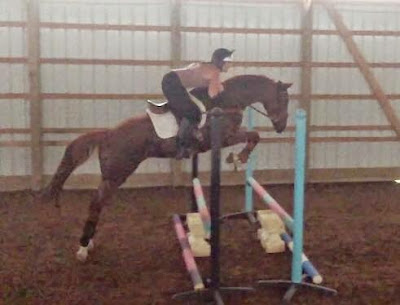 Few more times to the right, because that seemed to be his problem direction. No surprise. #OTTB 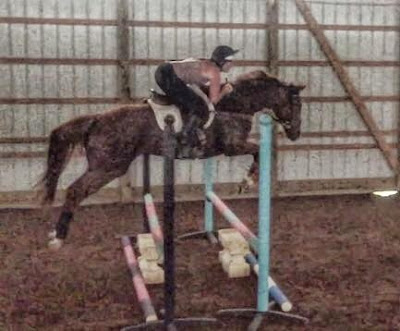 To the left he was pretty brilliant. And we ended on a good note with that, Never did touch the grid, but since this was our first serious jumping lesson together, we decided it was best to leave it there. 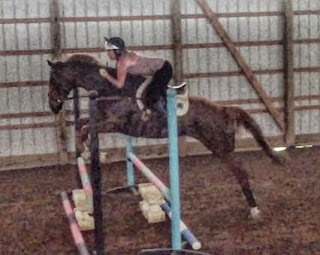 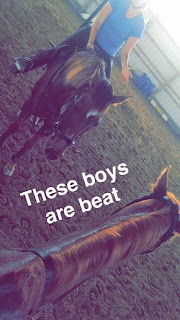 The battle plan for now is to take The Baby to as many schooling shows as possible until Champagne Run where we will tag along as a Non COmpete and then school XC that Sunday. Thats a ways off yet, so until then I hope to continue lessoning every other week or so and really making this horse into an eventer!

Its been almost a year (holy shit) but I think we are starting to really connect. I'm his person and he's my horse and I'm his person. 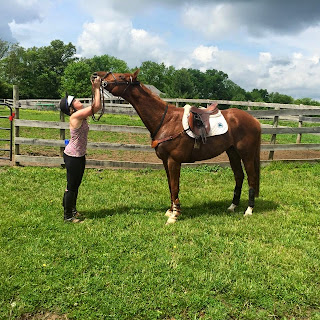