I dont have many words to write, just a lot of pictures to share. Because pictures. 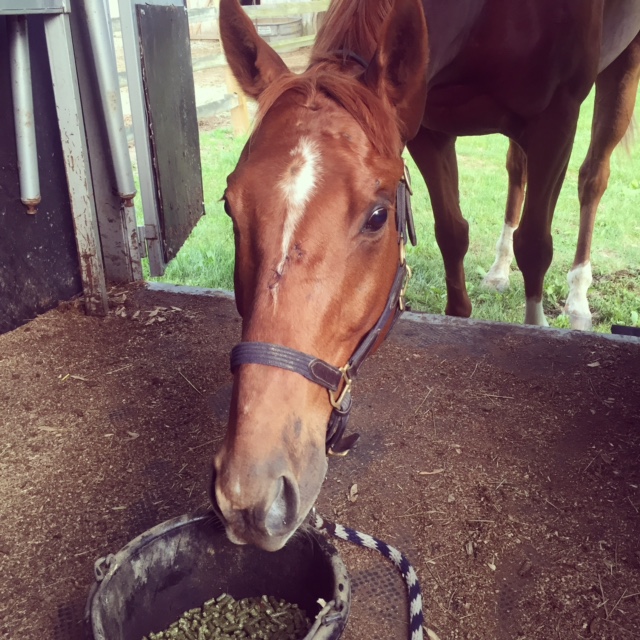 Re-trailer training isnt going as well. Hes taken to stomping on it as if hes offended. 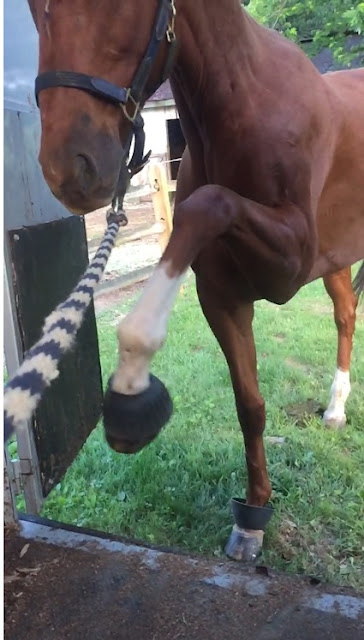 Okay B. Whatever. I'll take it slow with you. Again.

He's been phenomenal on the lunge line though. PHENOM. 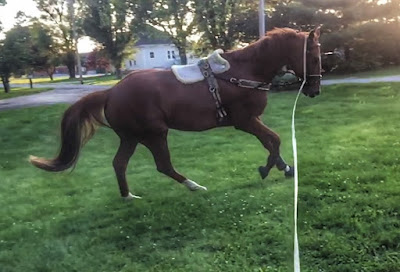 He was a little more tense to the left, which is odd for him, but we worked through it. 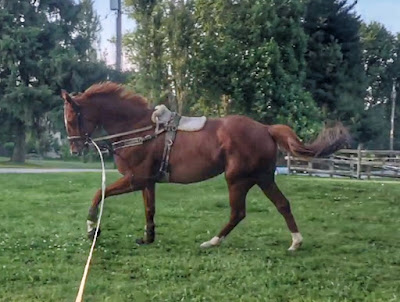 We (Amy and myself) were supposed to jump lesson today since we are trying to get our butts to a show on the 27th but PerfectTrainer had to cancel on us. Sadface.

I've been riding Lilly Belle a bit to her dismay haha. Shes also scheduled for some torture trail riding tomorrow with a few friends. 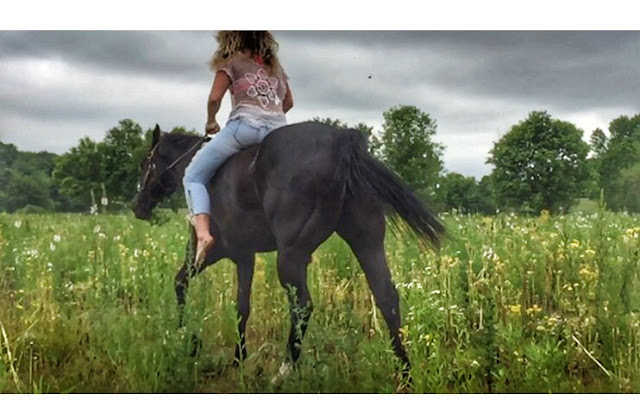 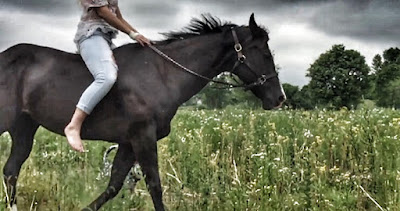 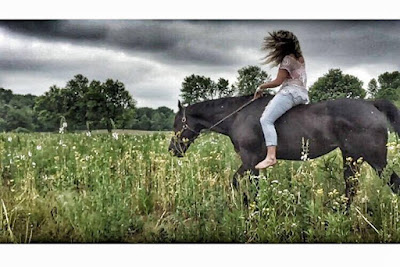 Also am I the only one QUIVERING IN ANTICIPATION OF THE BELMONT???
Posted by Checkmark115 at 10:13 AM 6 comments:
Email ThisBlogThis!Share to TwitterShare to FacebookShare to Pinterest

Yesterday was supposed to be a fun day. Friday was amazing in terms of my life and I was on cloud nine. I had made plans with Amy to go XC schooling with the red nugget for the first time ever and I couldn't be more excited.

Then I dreamed some horrible things and woke up wondering if it was a sign.

In case you didn't know, recently Bacardi has been a dream to load. Which is a huge deal. He even loaded into Amy's trailer last week without much fuss and I thought we were totally over it.

I still put the dunce cap on him though in case of any surprise explosions.

I thank sweet 8lb 5oz baby Jesus that I did because my adorable OTTB turned into a shitshow.

All of a sudden he just decided he wasn't going to go into the trailer that day. Just decided against it in typical Bacardi fashion. I didn't push it. I was calm. I was relaxed.

45 minutes later I was not so calm. But I tried to remain relaxed. We were going schooling dammit and I had all the time in the world. Now it was just the principal of the matter. This was just a tantrum and I was pissed.

Amy showed up with her trailer thinking he may go into that one and just at that moment, the Red One threw the biggest of all horse tantrums I have ever seen.

I mean, this was epic. Words cannot describe. You had to be there.

I wasn't even doing anything but asking him nicely to come hither and he EXPLODED. I mean exploded backwards, throwing his body everywhere, essentially flailing like one of those blow up dolls you see at car dealerships.

I hop out of the trailer, steaming with anger and frustration only to see my horse standing splayed, shaking, with his head bumper askew.

I'm just shaking my head like "You are an idiot SIR, what the HELL"... until I see blood dripping from his nose.

I do not do blood. Cannot.

And then I see bone. Actual bone. ON his face. I almost pass out.

I attempt to assess the situation, shaking all over. 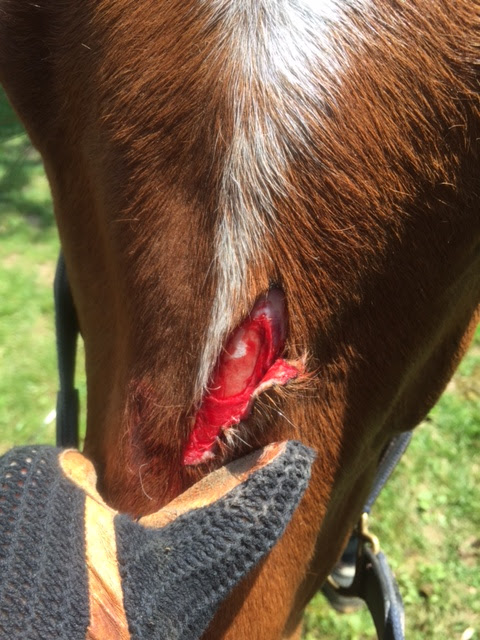 I think I was blacking out as I dialed the vet. Like literally blacking out. Not even sure. I do know I was seriously choking back tears talking to the ER vet.

WHICH BY THE WAY. I called 6 minutes after they closed. SIX. FUCKING. MINUTES.

So of he had JUST been a retard like 7 minutes earlier, I would not be paying for a fucking ER vet visit. Perfect.

Anyways. All I could think was, holy fucking fuck thats my horses skull. I can see it. Hes never getting near a trailer again. We are never going to a show. Hes never going to trust me. He hates me. He will have a giant scar on his face. This is all my fault. I've ruined everything.

And then I felt really really guilty. Horribly. Liek how retarded is it of humans to ask a horse to go into a metal box? Really. For our own wants and desires. And now my horse was seriously injured and in pain.

I was dying inside from the guilt and fear. Dying.

As I continue to assess, I note he has also managed to nick his forehead, and 3 of the 4 legs. I dont even understand.

And then I pull off his bumper. ALL the hair is missing form his poll. All of it.

I think about how if he didn't have the bumper on how I might have a dead horse instead of an injured one, and I am overcome with emotion.

While waiting on the vet, I administered some bute to my poor fellow and hose him off. He had rightfully worked himself into a lather and I figured some cool water might help.

The ER vet was there within the hour and for that I was thankful.

Bacardi was more than a handful for the stitches. More so for the actual needle. He wouldnt let the vet NEAR him. He really worked himself into a tizzy all over again. He was lashing out, dancing around and being a total fuck. But I felt guilty enough to not be mad. I'm sure his ears were still ringing from that facebashing.

Eventually I had to twitch him, which killed me inside, but then he went to sleep.

The vet was quick and efficient and he was all stitched up about 13 minutes later. 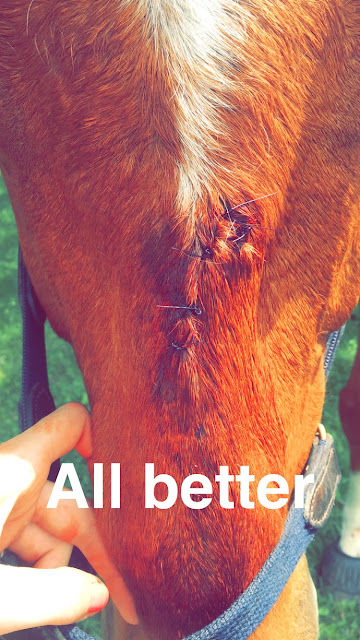 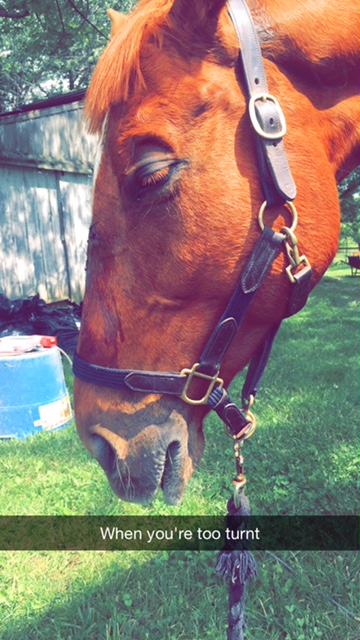 Anyways, the vet thinks he should heal nicely. I'm still terrified of the outcome of all of this.