I have time for a short and sweet update from le iPhone before work (apologies in advance for formatting). I have so many updates, I need a real computer for those!
Also in case anyone didn't read my last post, just a reminder of how majestic and wonderful B has been lately... 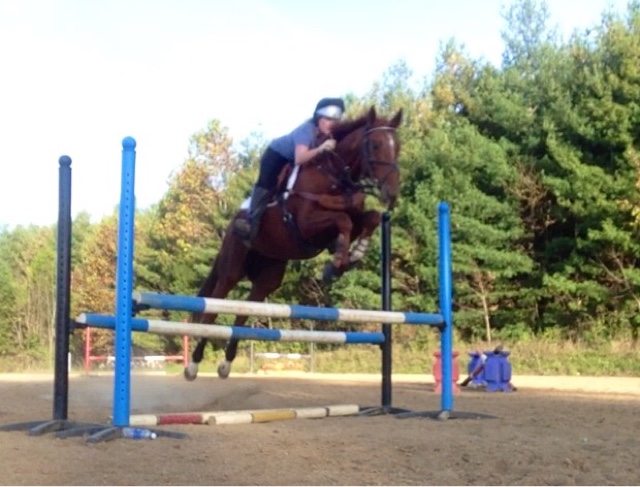 I've been having a rough week in the ways of non riding, and got the immediate urge to clip my horse, instead of ride, on a random weeknight at 9PM.
So of course, despite no planning, bathing, clipper sharpening or real attack plan of any kind, I drove out to the barn and clipped my horse.
Sometimes, instead of adulting and thinking things out, I just jump in and hope for the best.
Bacardi is not one to stand very nicely for the clippers and I knew that going in with this random clip job. I figured I might just brush him off and then be like "Surpise bitch, you're getting naked today".
It worked to a certain extent actually.
Last year I had to take three separate days, sedate and twitch him to get the job done. And he still wouldn't let me touch him in some areas. Clipping his neck has been a real problem. Not only does he HATE it, but that is literally the weirdest shaped body part on a horse and when said horse is dancing about, flipping his head around, clean lines do not get drawn.
Last year this resulted in me saying fuck it and shaving almost all his hair clean off.
This year, he was much better.
I even free handed a design on his butt. Because we all need to make dat ass show out & it's my specialty. 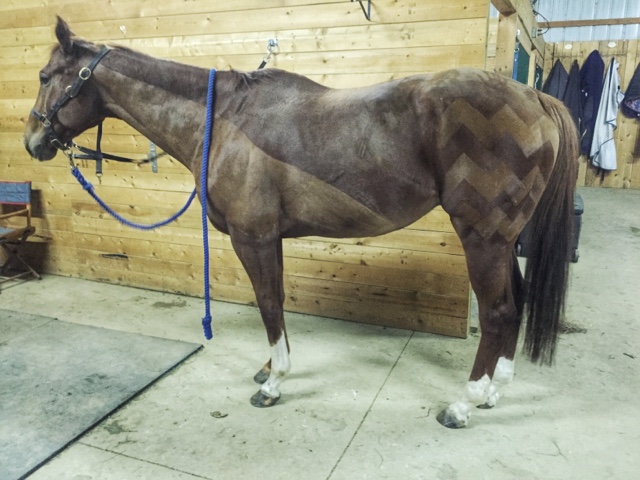 Despite standing like a total goon, I think he looks pretty good.
I've done some cool stuff on Yankee before too and really do enjoy clipping 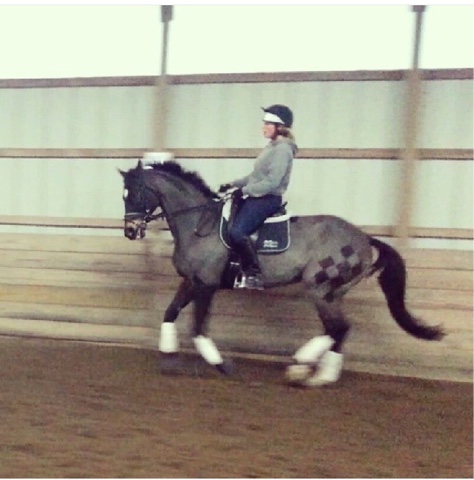 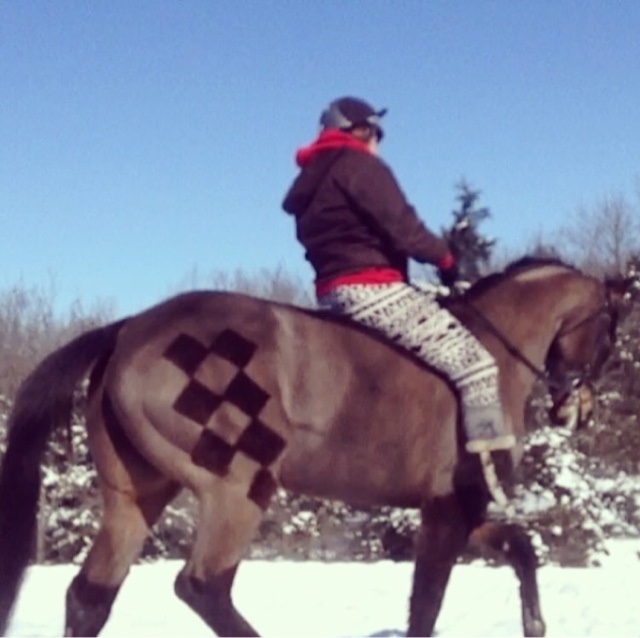 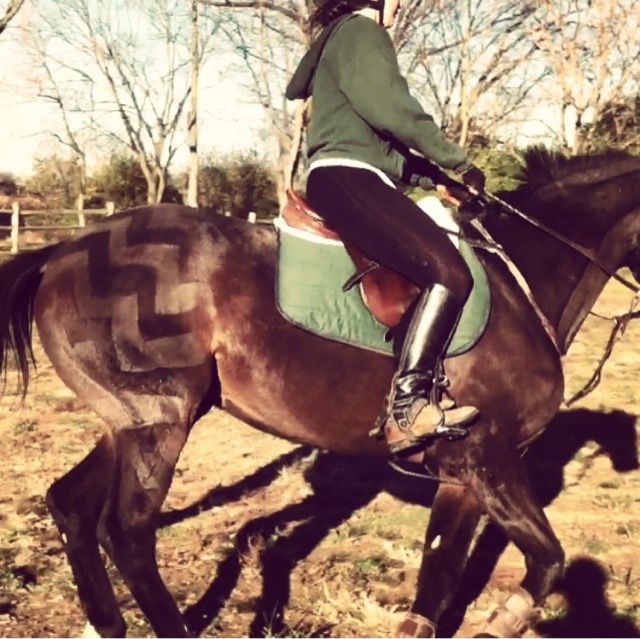 Miss him.
That aside.
He was extremely dirty (not reccomended) and I'm sure I ruined my blades, but also, fuck it. It was time for new ones anyways and I just HAD to clip that night. Because I had to. "Treats now? No more photos please"
I'm well aware the lines aren't great, but he was very convinced the clippers were ripping his skin off and flinched the entire time I was clipping his neck and shoulders. Really difficult to get perfect lines with a twitchy horse. However, I'm not even mad. Twitching is a big step down from lunge-rearing and breaking crossties. Go B! 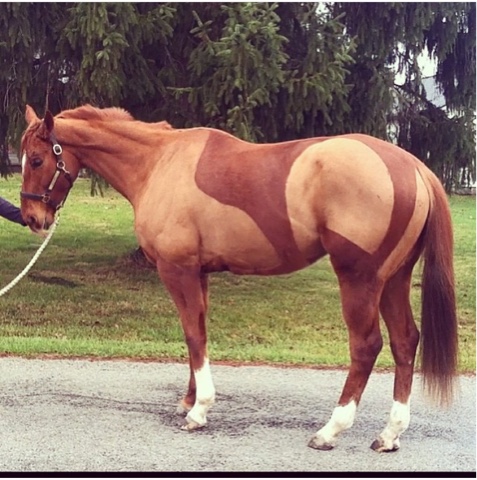 Last years clip, a sad combination of "oh fuck I messed up all the lines, shave it all off and okay horse won't let me clip here"
I kept the trace high this year, taking off all the hair from his chest, most of his neck and some belly, but leaving the rest, save for chevrons. He didn't have an issue staying fat last year while mostly naked, but he didn't need to be fully clipped and blanketing was a bitch. He does sweat like crazy, so If I need to take more off as the winter goes on, we can, but he's high energy enough as is without the cold wind biting at his skin.
I DID snag this quarter sheet (Rambo Newmarket) I've been lusting after for literal years and I'm confident it will make us even more magical. Because stuff and things.. It was bottom dollar and a friend was selling it and I was like YAS PLZ. Kind of how I purchased Bacardi to begin with, HAHAHAHA.
Anyways, I'm rambling, but he's been very good lately & I think he looks rather dapper with his new haircut. 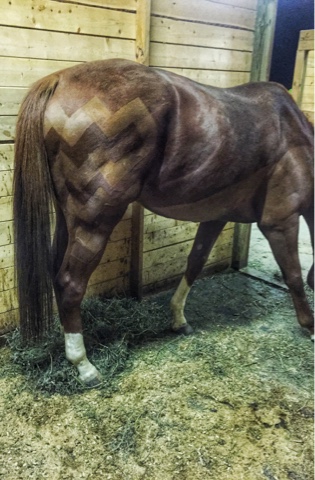 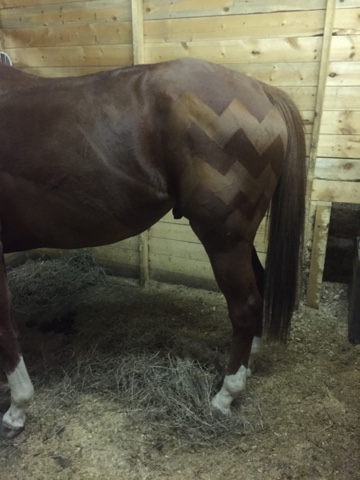 Posted by Checkmark115 at 9:00 AM 4 comments:
Email ThisBlogThis!Share to TwitterShare to FacebookShare to Pinterest

What a wonderful weekend.

I haven't spent more than an hour at the barn in a really long time and I did it 3 days in a row and its was GLORIOUS.

Pretty sure the last week was a week from the pits of hell and I am glad it is very over. Horsey time was much needed and a huge breather/reset for adult me.

A girl will always need her pony. Always.

I took Friday off by happy mistake, and I wasn't mad about it, since I spent 3 whole hours at the barn Friday morning. Reveling in the fact that everyone else was at work and I was at the barn, doing what I loved most, and the rest of the peasants were slaving away inside. It was great.

Its already been 6 weeks since Bacardi came off stall rest, and I've slowly been amping up the difficulty and length of our rides. Last week didn't count since my uterus was trying to end me, but otherwise, we have both been slowly recovering and gaining strength.

Meaning, it was time.

I have always loved jumping more than anything else, but never really gotten to do much of it on B. I think we have jumped less than 20 times together in a years time span, and that makes me sad.

HOWEVER, super fancy boarding barn has many jumps and very arena, so I took much advantage of it this weekend.

There was already a course set up and I decided to leave it and see what happened. It was set at a staggering, 18 inches so I left it and warmed up over it.

Bacardi was a WILD man, just in time for the buyer party to come out and try out a horse the BO was selling.

This is the ONE thing I have found I dislike about boarding. It seems literally no matter when I show up, its not an optimal time to ride. I somehow ALWAYS show up at feeding time, or a lesson and theres no schedule posted so I have no clue. And I'm always like, well, I'm here, I'm sorry, I'm going to ride. I get it though. Thats what happens when you board at a massive barn with tons of horses and riders. I aint mad about it, I mostly feel BAD I'm always tearing him away from feeding or in the middle of a lesson.

Anyways, he warmed up quite exuberantly. Luckily, BO was riding the horse and he is a seasoned show horse and took no mind to B flailing around having a good time.

I was  good girl and let the potential buyer have her go, and it gave B a wonderful opportunity to learn patience and how to stand. Which he did for 35 minutes solid while the buyer rode. GOOD MAN.

B hopped right back into it too, literally, and really settled into a rhythm. Best hes felt jumping with me, EVER.

I didn't do much coursework, just popped over a few fences here and there, working on not losing it on landing, or getting too displaced by his powerful bascule.

Opposite to Yankee, he goes quite nicely UP to the fence, then really loses it on the landing. He doesn't necessarily bolt, but I can tell hes off balance and he gets rather quick. Like a good man though, always comes back after about 5 to 9 strides (lol) and then is great again.

We need to work on that.

I do prefer this over bolting TO the fences though, hands down. Hes actually a lovely and packaged horse up to the fences and almost always outjumps me. I still cannot for the life of me figure out how to stay WITH him. UGH.

It is much harder than you think to be your own photographer, and I'm pretty sure it took me more time to set up my ipad in juuuuust the right angle and then get on, get collected and jump, than to just ride (but I wanted pics dammit). It was a pain.

Seriously though, I was floored at his efforts and how lovely he felt. Could not have been happier.

Saturday I rode in the afternoon, and OF COURSE, horses were being brought in for dinner (literally, no schedule) but he got over it.

I decided to jump again. Not something I usually do, but the course was still up, it was beautiful outside and why the fuck not.

Again, pretty hype for warm-up, but worked out of it.

He was a little spookier than normal, I think due to dinnertime and the fucking combine cropping the beans next to us and I couldn't blame him for that. Sounded liek a death machine.

Regardless, he gave me some attitude about a panel jump. REALLY did not care for it. Might have been 2'9 total, and if he refused he would just step over it after he gathered his thoughts (plus to being 17.2hh), but still really annoying. Again, I can't blame him. i am pretty confident hes never jumped a panel fence and he always hopped over after the initial refusal, but I really didnt feel like falling off that day, so we moved on from that mess. Another day.

I hiked up the fences, keeping the verticals at around 3ft and made the oxers about 3'3. It looked really wonderful. I can't remember that last time I've jumped over 3ft and I was feeling confident it wasn't too much for B. ( Did you see his overjump the day previously?).

He LOVED it. Focusing mainly on balance in the turns and not "bolting" on landing, we worked through a few rounds of figure 8 and outside lines courses. 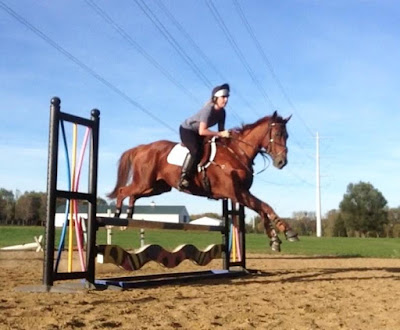 He was amazing. Like...a cloud.

I felt like I was riding a rolling, delightful and happy cloud. I can barely form words into a meaningful post (mostly because Monday Mush brain), but I am sure you all know what I mean.

I think jumping is his calling.

Minus his dislike of the panels, we never had an issue, even with the "bigger" fences. I was dying of happiness. WE WERE JUMPING. As a team!


Look at the big man go!

I felt like spoiling his pretty self and spent an ectra hour at the barn that evening primping his tail and currying, then wrapping his legs and fluffing his bedding. He got so many carrots, if he weren't already orange, he would've definitely turned. One of my favorite things about B is that he has turned into SUCH a lapdog. Like, he always wants hugs and loves. Such a massive difference from a year ago.

Then Sunday morning I got up early and headed out to see my man and take off his wraps. The plan was to lunge lightly, rub down then turn out.

As soon as I took his sheet off I decided its time to clip.

His hair had dried in this wavy formation and I'm just like, no. Its time. I've been putting it off, but its def. time. Suggestions on designs are welcome, as I can't really think of anything new this year. Keeping in mind he doesn't stand great for clipping...super ticklish.

Anyways, he lunged wonderfully, didnt even look sore and then we did a ton of carrot stretches.

This week, not much planned in the ways of riding. I left my boots at home today so I didn't ride, but 4 days in a row I figured warranted a day off anyways. I believe some flatwork is in order and then I leave for the weekend on more adventures on Broadway and weddings, so this post will have to keep y'all satiated for a bit. 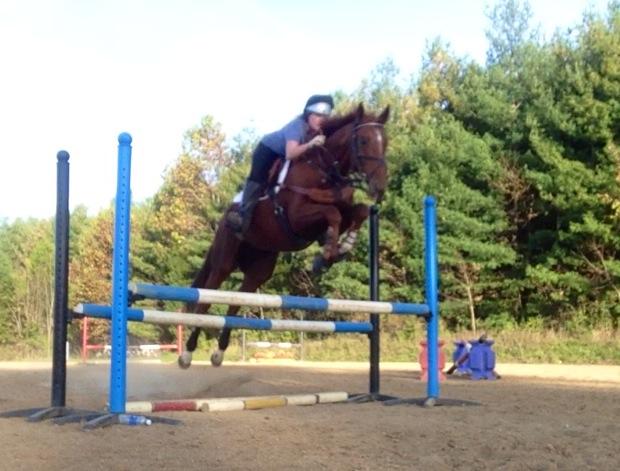