So a few of you might've already seen a lil tease of this post and thanks for the comments :D

Yankee recovered quickly from his little foot issue and a few days ago Jackie and I spent a day riding each other horses. Amid the tornado watch too. It was frightening, but fun. (later that night we had some massive hail accompany deathstorm. It was the size of my palm. DAMN NATURE YOU SCARY)

Here's a VIDEO... I swear in it though because I am a potty mouth that can't control my swear word usage. Heh.  So beware if you dont like cursing, dont watch!

After each round through the grid we took him over one of the two oxers. Both set at 3'9.. and he was rather....overzealous to say the least, HA. I'd rather have him jump well and be little cray than jump like shit an refuse stuff and come in too close. Yankee has ALWAYS preferred the long spot and I've learned to just stay out of his way and not hassle him when I'm 3 strides out. Also I still have to work on my eq and not shoot forward. Jackie helps. 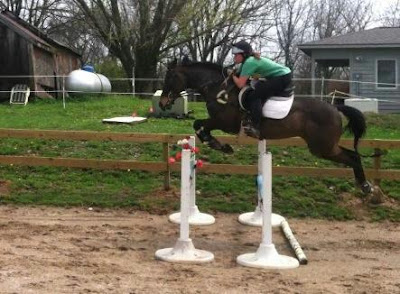 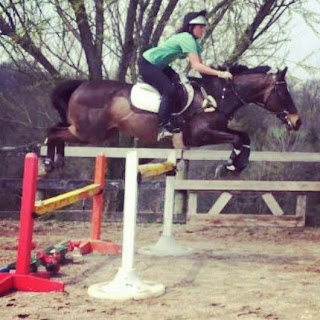 I don't know if you can see it well, but we put flowers ON the blue oxer top rail. He didnt even flinch at them. If anything he just jumped higher. I was extremely happy with his little self rocketing around because he wasn't out of control, just exuberant. Every time he listened to my half halts afterwards and collected right back up. For a little cooldown fun we played around in our little water jump. He refused the first time, which is worrysome considering that would be 20 penalties, but we shall sort it out this weekend schooling at Longview. You might also notice I jumped him in his lever noseband and waterford instead of the hackamore. Last time he was rooting with the hackamore so I put a bit in to remind him of his manners. 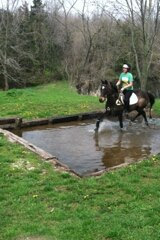 After all that fun at my barn, we went to Jackie's to jump miss Isis.  She does the same thing Yankee did when he was a bebe-rushes the fences. She also hates contact. Which make sit quite difficult to execute half halts without her throwing a piss fit.

Jackie has been doing a TON of work with her since she came back from her injury (for new readers, she tore a hole in her butt muscle. A BIG one. Long story. But it was gaping and huge. Laid her up most of the winter. She's been back in work for about a month and a half?) and her head tossing has gotten LOADS better. Jackie's played around with bits and nosebands and rides her in a running martingale which has done wonders for Isis.

Jackie took her over a few low fences, including a water jump, and did a little bounce exercise trying to get her to to SIT back in her butt and not dive forward. It seemed to sink in a little bit and she nailed it after a few run throughs.

I had never jumped her before so I experienced QUITE the learning curve when I got on and tried to half halt her to the first fence when she dove for it. She basically stopped moving, threw her head up and we promptly ran smack into the standards and I about fell off. We re grouped and I re figured out how to ride her haha. Lordy. Jackie make sit look easy because let me tell you, it is not. Riding one horse for so long can def be a curse.

I took her though the small stuff a few times 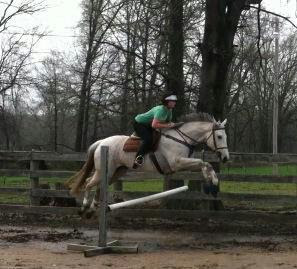 Then Jackie wanted to make an oxer and hop her over it a few times and try to see if I could help her figure out why she dives for fences/ throws a fit when you half halt. Sometimes a second opinion helps when you get stuck in training. 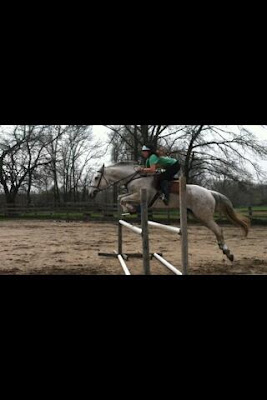 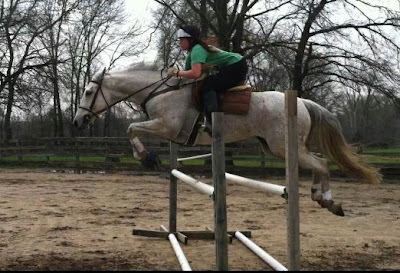 You cant tell, but I was struggling HARD to maintain my position on this gal. She has a massive jump and along with a floaty canter I was all kinds of all over the place. While she can be hard headed I really do like this mare. What I did was pretty unorthodox, but it seemed to help balance her and not charge so much. I would half halt 2 strides before our turn to the fence, literally loop the reins and just use my leg and body to turn her, then halt halt ONE TWO again, then just let go. I TRIED to not do it less than 4 strides out because by then she had her stride and if you mess with it she is bound to whack it. Like most horses. She's def more sensitive though to pressure so thats why I looped the reins after each strong halt halt. I liekd how she responded but I didn't know if Jackie was OK with how I had ridden her. I sometimes hate riding other peoples horses because I dont know their limits etc etc.

After that Jackie got on and tried the same thing and after a few rails she  nailed it with this beautiful jump... 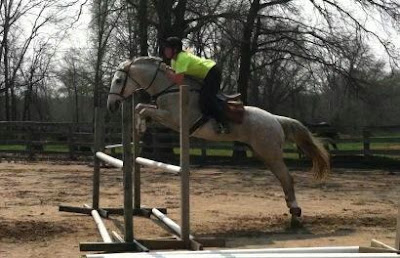 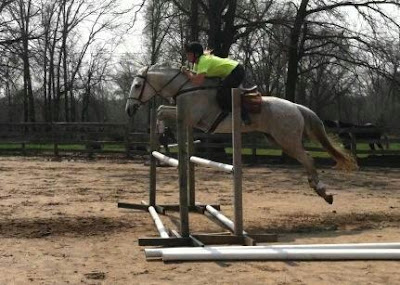 Gorgeous huh? I can't wait to go schooling this weekend with them!  After our jump school we took her out to the field to let her let loose. J thinks that she's getting arena sour and needed to let loose. 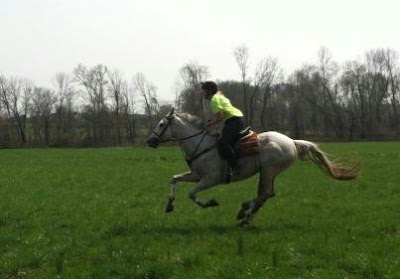 And I agree! Mare mare loooooved it!! I think we might race Sunday >:)

Jackie also made a new blog now that she has her own horse, so you all should head over there and follow her. Link is www.theisiseffect.blogspot.com

Hopefully our next post will be some badass XC pics! (cross fingers that the ground stays firm with all this rain)

Posted by Checkmark115 at 3:09 PM 6 comments:
Email ThisBlogThis!Share to TwitterShare to FacebookShare to Pinterest

I'm still waiting on the rest of them, but here's a sneak photo of the next post about Yanks and his wonderfully overzealous jumping yesterday... 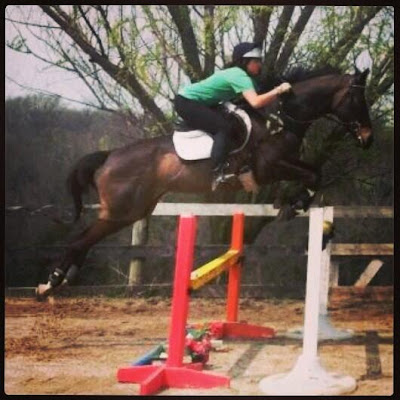 Posted by Checkmark115 at 4:47 PM 7 comments:
Email ThisBlogThis!Share to TwitterShare to FacebookShare to Pinterest

....I SUCK at posting, or doing anything really. I'm sorry ya'll. Especially Cindy, I am SO behind. Forgive me *begs on knees*

After recovering from bronchitis and then the dressage show last week, shit hit the FAN. Of course. Thats how my life goes. I'm not surprised anymore. Not only did I work a milion hours, Yankee got an abcess, thrush and a fever ALL AT ONCE. He was laid up for a week and I was legit panicked about all the things.


I felt so terrible for the poor guy. We've had nonstop rain for about 2 weeks (yes, and its still raining) and even though he stays in during the day and I pick his feet daily, he still got thrush. Per usual every spring. GO AWAY RAIN I HATE YOU.

It was horrifying. I said good night to him Monday night after our gallop (he was perky and fine) and the next morning his head was hanging, he was literally holding his leg up in the air and it was all puffy and hot. I picked the foot trying to find the problem, it starting bleeding ferociously, I panic, call my farrier, have him come out, he says he not only has thrush BUT an abcess in the BULB of his heel (WHAT THE FRICK, is this possible??) and the thrush was infected. How the HAIL did this all happen overnight??

Poor guy was a sad pony for about 4 days, but I gave him 8 days off anyways. He seems perfectly fine after much babying and we still plan to XC school this Sunday. I'm going to ride him today and am actually more worried about him killing me. Due to the foot ailments and the torrential rain, the horses have only been out ONCE in a week. They are going cray.

I guess I will never really do my second post on "Good Peeps" But I will say that I loved my bf a lot for coming to my show. Like a lot a lot. He hated it. But still came and videoed for me :) He MIGHT come schooling with us Sunday too. And he WILL come to my events >:)


So the show- I will just touch on it since its a week later and I don't want to make this post hellas long. We did two tests and did great on the first and quite horrendous on the second. All my fault-sorta.

I couldn't have been more proud of my lil OTTB, he was chill from the second he stepped off the trailer. 7 years later I guess they chill out and stop caring. I only had to warm up for each test for 10 min because he was basically falling asleep he was so relaxed. HOPEFULLY he keeps that up for USEA dressage. 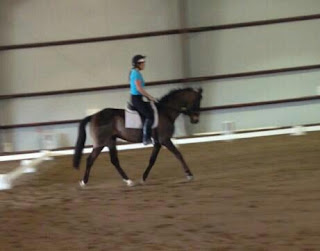 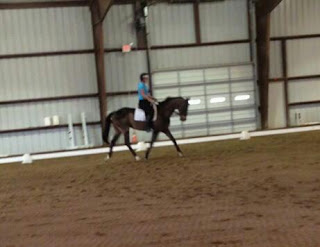 We got straight 7's with the exception of our stretch work-5's. To be expected. The judge was harsh, played favs and we haven't worked on stretching in a while-oops. I love it when judges are like "really good" "great" "nice!" and still give 7s....uh thanks? We totally deserved the 5s on free walk and stretch circle though.

Overall we got a 68% on the first test and I was pretty happy with the exception of her comments in the end "Needs to be more relaxed" ...uh hwhat? Apparently he looked super tense, (I think thats just his TB head carriage) but to me he was THE MOST calm I've ever felt him. He was basically a cucumber. And I was SUPER impressed with his trot work. Looky!! 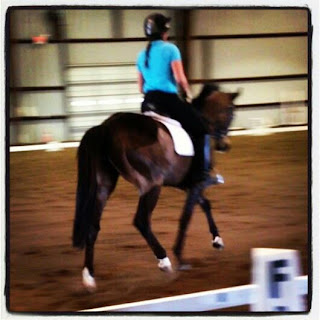 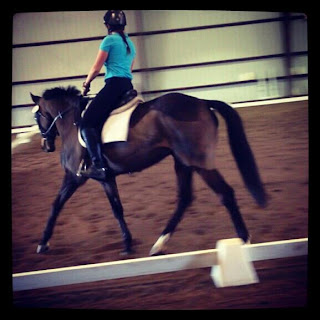 Our second test was alittle more...shitty. I had a reader because I get really confused trying to memorize USDF dressage letters for large arenas. Mistake. I could barely hear her and I missed TWO movements. Yes two. The judge yelled at her and felt bad for me but I still got 2 errors and I los tmy mind after making two mistakes.

I get really shaken when I mess up and I kinda quit riding. Yankee was still calm, but he felt me get nervous and wasnt great. Add to that I rode hella shitty and it wasnt fab. We got a 57%, mostly 4s and 5s HAHAHAHAHAAAA. Hwhat. Take a gander at my effed up eq... 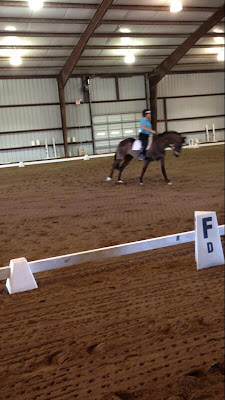 So that was Sunday. I was still MORE than happy with Yanks and our 68% got us a first. 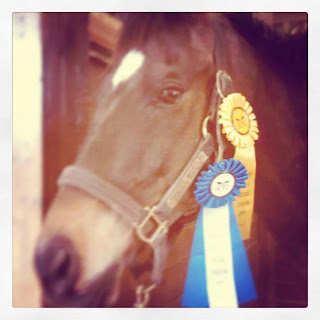 Holla back later this week! Hope everyone is doing well and no one else is getting drowned with rain.