recently I read an article that Eventing A Gogo shared on Facebook about the demise of the "Super Stallion, Totilas" and it got me thinking...

I have never actually thought that Totilas was super star-more like a super fake. Gal, like may Europeans trained him with rollkur and fancy front leg movement which adds that "spark and flourish" the judges sadly like to see these days. They reward gimmicky training for proper training and its very apparent in the breakdown and eventual end of Totilas's super career. I always found it rather sad that his neck was so cranked in that he could barely breathe and his front end movement was so exaggerated that he looked like a walking horse, while his back was flat and his hind end trailed out. I will never understand how the judges always scored him so high. Perhaps they were blinded by his front end whipping around like something out of a big lick show.

I started to notice it more after that article (I wish I could find it, very good read) the horrible epidemic of incorrect training that this world seems to be revolving around, especially prevalent on social media. DO NOT get me started on the teenagers giving "advice" to each other on Instagram (so comical, really, I don't know why I even troll there anymore) on how to train their dressage and event horses. Twitter is no better and there is even talk of "head-sets" on my beloved OTTB Connect page on Facebook.

WAKE UP PEOPLE GET A CLUE

A "headset" is a term in the HUNTER WAND WESTERN WORLD. It might be "acceptable" to see the hunter and pleasure queens yank yank yanking their horses heads down with pelhams and harsh hands but that is NOT what dressage is about (DISCLAIMER: I showed on the Hunter circuit for 7 years-I HAVE SEEN this first hand. Sure, there are soft, kind, correct hunter riders, but they are few and far between. Do not try to argue this. Its ridiculous and thats why I gave up hunters). If you want to get super picky and technical, I GUESS you could call when a horse is on the bit and soft and engaging their whole body and brain to the rider and where they carry their head a "headset", but no, not really.

A horse reaches the point in training when they accept the bit and have the appearance of a bent neck ("headset) at the POLL. The key term being "reaches". It takes TIME to train a horse to accept the bit and it not reached in a few weeks. In fact, dressage means TRAINING. It is a continuous, lifelong process. It takes a soft hand correctly training from the inside leg to a connecting but giving outside rein, with the supporting inside rein and outside leg to ask the horse to come through the bridle. ASK. Not force.

Too often do I see the dressage and eventers yank yanking their horses into a false frame  and getting rewarded for it in the ring! WHERE IS THE TRAINING? WHY ARE THE JUDGES DISREGARDING PROPER ENGAGEMENT? WHY ARE HORSES PLACING SO HIGH WITH FLAT BACKS AND TRAILING ENDS?

Am I the only one frustrated here?

Its scary, coming from the event world, to hop on a horse trained in western or hunt seat and feel them traipse along the most crooked and flat. Like, I can't even.

I went and tried out a horse the other day for my good friend and HOO BOY is she a western  horse. Crooked as can be and so downhill I wanted to slap skis on and take a ride.

This was me and her fighting for about ten minutes before I realized she has no idea what I'm asking her (western trained, WUT ARE SNAFFLE BIT) and I just dropped contact and sat like my old hunter days. 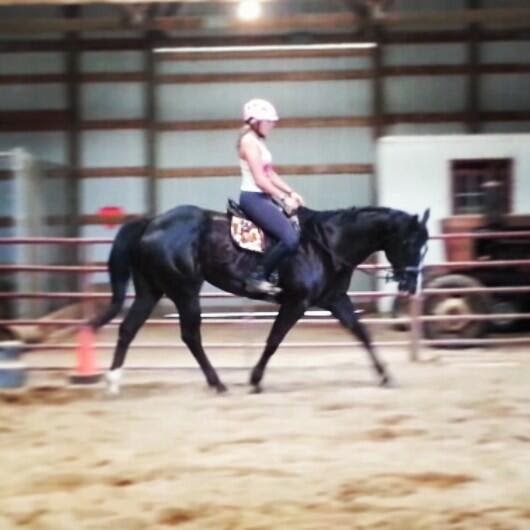 He's buying her and is putting her in training with me to re-learn how to carry herself and accept contact.

I am just happy I'll have another project and that I can perhaps un-do all the yank yank training done on her.

So grateful for my dressage background. I will never regret switching from hunters to eventing. While there is bad in every sport I truly believe eventers (most of them. THOSE HUNTER QUEENS ARE INVADING) have their heads screwed on right and take the time to condition and train their horses properly. And they're just plain nice. 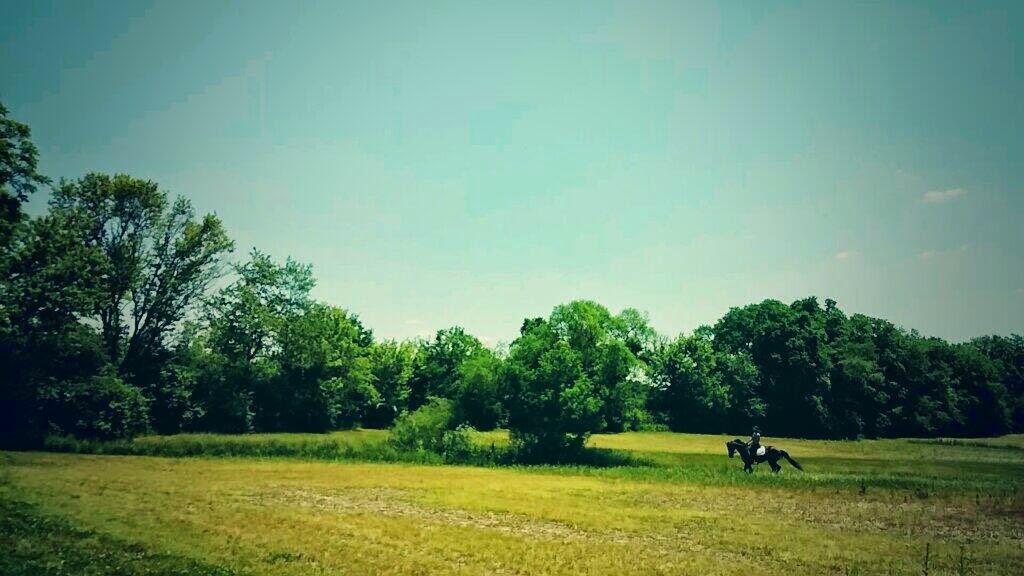 Posted by Checkmark115 at 6:09 AM 6 comments:
Email ThisBlogThis!Share to TwitterShare to FacebookShare to Pinterest

A few of you asked for a pedigree/racing post on the red man, and I actually did all of this before I bought him. Because obsessed.

But getting all of this together took a good chunk of time SO YOU BETTER READ IT AND LIKE IT DAMMIT.

His old owner actually had a race pic, which i think is WICKED cool because I have zero of Yankee and it makes me a sad girl. Sidenote if anyone knows how to track down 9 year old racing pics, it'd be chill if you let me know.

Bacardi's race name is truly abhorrent and I'm changing it immediately. I already have one picked out and its not registered with USEA but I'm not sharing yet... Hint-it has to do with alcohol, HA.

HERE is a link to his pedigree. 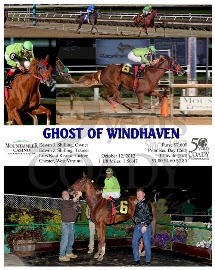 I'm also pretty positive this is picture of him at his old racing stable. Came up in google search and it looks a hell of a lot like him.... 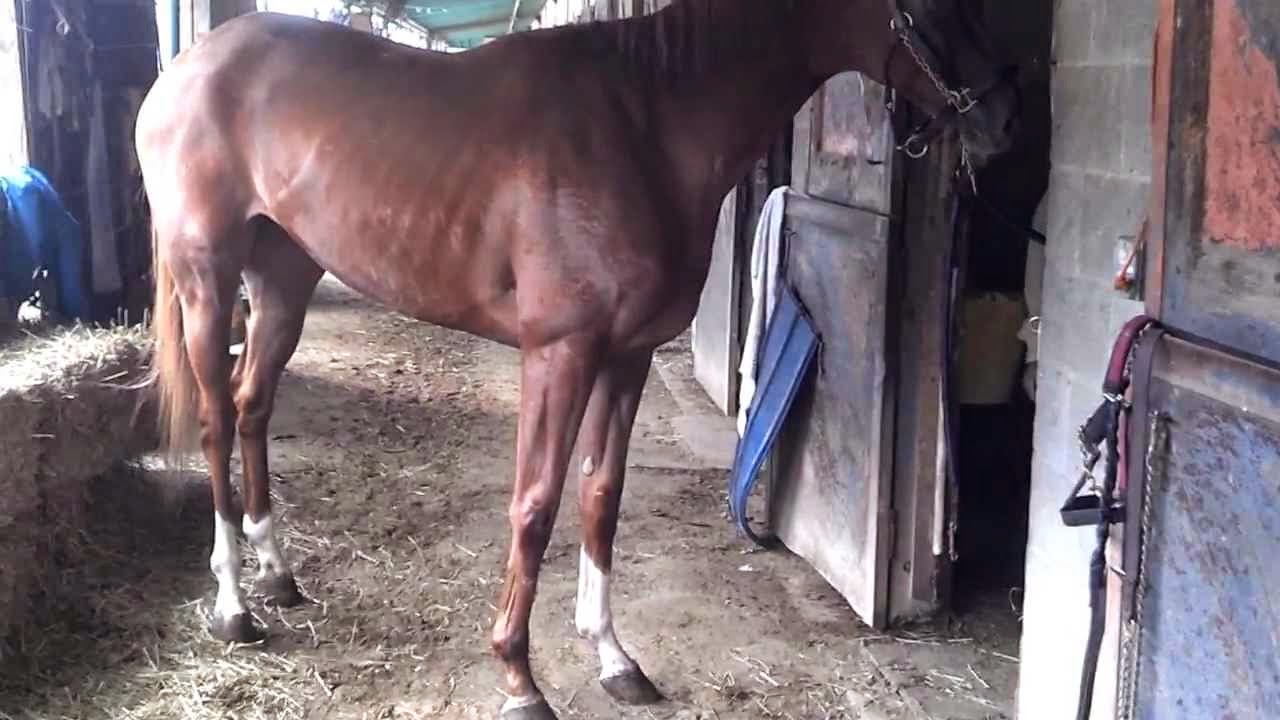 So thats neat. I dug through his pedigree quite extensively and minus his immediate sire and dam he has some very impressive bloodlines.

On his sire's side the most notable;