The best laid plans never take into account horses and their propensity to pull shoes.

For real, once the thermometer reaches 80* they flip their shoes off like they're walkin inside mommas house.

I have a few shows lined up, as well as bi weekly jumper lessons, and the first one was scheduled for 4PM today.

He pulled a shoe Tuesday and I fretted that he wouldn't get it back on in time for the lesson, let alone riding all week leading up to it. He got worked Monday and that was it. Whomp whomp.

I wish we had a farrier at our beck and call like apparently so many of you do, but also apparently we aren't the only clients he has. Who knew?

Shoe was put back on Thursday night (yesterday) and he was 100% and lovely for our light jump school. I was PUMPED for our lesson today.

And then he flung it off in turnout Thursday night.

Yes. The same day he got it tacked back on.

Not pointing any fingers here, but WTF.

I had this issue last summer with B as well and I literally cannot comprehend what is happening out in the field. No amount of bell booting will keep his damn shoes on.

He has thrown the same shoe, not once, not twice, but THREE times in the last four weeks. He broke a new record throwing the same shoe twice within 24 hours. Not even 24 hours really.

Of course now the foot is ripped to shreds and I'm sure we won't keep it on at all from this point forward,  and I'm sure it will be dastardly expensive and trying....so there's that shitpile.

Summer is apparently just problematic. I am literally just bitching because horses are the worst and I wanted to go to a lesson with a pro and I am adult POUTING. Why did I choose this sport? Why do I love them so? Why?!

Oh, and he's 100%, 3 legged, pitiful looks, horse sobbing lame. Which has NEVER happened when a shoe has been tossed. EVAR.

Posted by Checkmark115 at 3:52 PM 8 comments:
Email ThisBlogThis!Share to TwitterShare to FacebookShare to Pinterest

I cannot believe its already almost July. I know adults say this all the time, but time truly does fly. I feel like just yesterday it was snowing and cold and I didn't want to leave my house.

Now I am 6 months in to grad school (4 classes down), Yankee can start jumping TODAY, and B is coming along great!

Considering Christmas is now 6 months away and its almost the best time of year (fourth of July), I would say its time to reevaluate the goals I made in January. 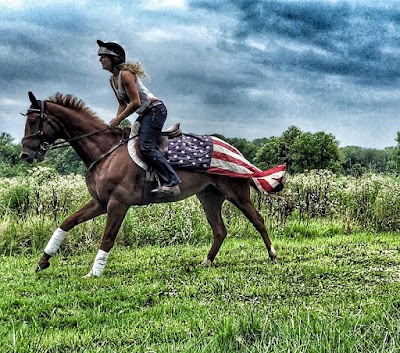 I have never been a huge fan of resolutions or goal making, for fear of failure (lol childish) but figured this year I would give it a shot.

Last night when I went over the lists I made (and hadn't glanced at since) I was pleasantly surprised to see some progress being made. Since I hadn't looked at them and all. Luckily, I made some achievable and reasonable goals (shoutout to grad school and SMART) that even if I didn't give them a second glance, I was still working towards.

If you can bear reading through another person's goals for the year, stay tuned.

Lets start with riding. red X means I have not accomplished at all, green X means part of the goal is complete and the red exclamations mean I don't even know if I want to do these goals anymore.

*Solid progress has been made without realizing it! Technically he was E at his first event with Supretrainer but that was a technicality...jumping the same jump twice, haha! I'm ok with that.

*However, we discussed, I don't really want to event right now. Too expensive and insane. I am comfortable admitting I am afraid of XC now...god knows why, but I am.

*Eventually we will jump 3'9 though. He's got the talent and the scope. Easily.

*We still have the same old trot. A nice one, but he is not quite there yet in discernible differences with the trot. Its ok. He's a baby.

*I say clean changes, but they aren't clean yet. He still changes late behind. But he does change on cue and can do about 4 figure 8's with changes inbetween! Which is progress. Yankee refuses to learn them so at least I have one of them that will do them on cue.

*B is slowly but surely realizing what renver and traver are and can hold it about 3 steps.

*Additionally, his leg yields are a lot less dramatic. (This is a big deal).

*I am also so proud that his turn on the forehand no longer involves rearing or dancing sideways and it is calm and collected. Also learned turned on the haunches to that the bomb.com

Onward to less interesting and more boring person goals. Also how many times can I say goals in this post?


Since this is a horse blog, I won't recap, but pretty solid work in the personal area as well.


Posted by Checkmark115 at 9:12 AM 5 comments:
Email ThisBlogThis!Share to TwitterShare to FacebookShare to Pinterest

They're here!! That was a quick turnaround time...not complaining. And apparently spooking B is insanely gorgeous, who knew hahah.


Posted by Checkmark115 at 8:20 AM 8 comments:
Email ThisBlogThis!Share to TwitterShare to FacebookShare to Pinterest

I hate playing catch up on Monday or Tuesday but the weekends are always so wild that blogging is impossible.

Thursday after our great week I decided to jump a little bit before I left town for the weekend and it was ...not so great.

Granted, there were several factors going in to a rather lackluster and disappointing ride, but I will take the positives away from it and be happy.

Positives: I didn't fall off, warm up was stellar and B jumped all the oxers
Negatives: Snapped my favorite reins, Bacardi just couldn't and refused all the CROSSRAILS

What the actual fuck B?

The ride started out swimmingly. Actually, freaking brilliant, and I was happy because I had had a pretty stressful day and was relieved it would be a relaxing do-all-the-things-right ride.

I really think it had to do with the time of day and the shadows and sun casting and glaring weirdly. Reason I say that is because he jumped ALL the oxers and verticals without question, quite brilliantly, but when it came time to jump the fucking tiny ass crossrail bounce, he legit had a melt down.

The sun was glaring RIGHT on the white part of the poles, making them extra bright, and then the telephone pole was casting a massive shadow right behind it. Obviously terrifying and should be avoided at all costs.

It took all of my encouraging to get him to go over the crossrails made into groundpoles and I should've chalked it up to a loss. Should've stopped trying there too, but no, I couldn't because reasons.

Reasons caused us both to get frustrated and cranky and long story short he spooked at the GROUNDPOLES so hard that in flying sideways and my attempt to one rein stop the madness, my reins snapped and I was left with a horse flailing all about and me sitting there hoping he didn't bolt off when he realized he was free.

He didn't, thankfully...just stood there like the giant giraffe derp he is, wondering where he went wrong in life to deserve such an evil mother.

I deeply considered getting new reins out an trying again but we were both fried.

Hey, at least the warm up was good right?

So, note to self, don't jump B near dusk when the sun is casting weird death rays and there are monster shadows in the area, god for fucking bid.

He had all weekend off, sadly, because EME went to the creek to swim! Apparently Yankee had a ton of fun at least and dragged his rider out to swim about 100 times. Boy loves to swim, what can I say?

I also survived the second Tough Mudder we attempted this weekend.

It was hot as satan's ballsack and I got a wicked forehead burn that 3 days later looks like a bad botox job. But it was really fun and mentally a true test of fortitude. I almost quit. Almost. Because 96* and 12 miles total was not very fun on mile 8 with no shade. That being said...I can't wait to do another one.

There's something truly satisfying about getting through something very difficult, challenging yourself and then overcoming it. I know us crossfitters are a wee insane at times (ask me how Memorial Day Murph went) but the mental benefits to these types of races are incredible. Plus, I just like getting dirty and getting free shit like beer and t shirts and headbands.

Then on Sunday, EME got together to take group pics and headshot. BO organized it free of charge, so OF COURSE I was stoked for it.

The group shot turned out fantastic, but because there are minor's involved, I won't be posting the photo just in case their parentals aren't chill with that.

No individual pics yet, but Yankee, of course, was a gentleman and a scholar and stood very still with ears pricked. Bacardi on the other hand was a spooky asshole and couldn't stop snorting at shit. Luckily, his ears were forward so I just stood there pretending it wasn't happening, fake grinning the whole time. #whatever

Waiting our turn, I of course took a million iPhone pics and some of them turned out rather adorable. 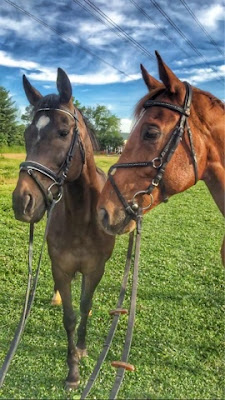 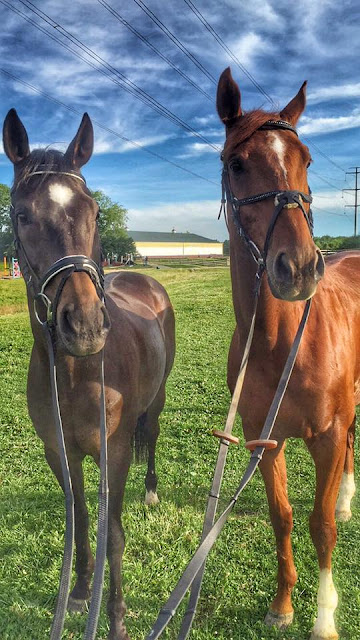 
Also, Bacardi was lovely this evening for his lunging sesh. Hoping his insanity the other evening was just temporary...but lets be real, its B.