Proud and Not Proud

It has *mostly* been quiet on this front, with two exceptions. Life is trucking along, I moved houses, grad school is half over and riding is happening.

We did end up going to that dressage show last weekend, but they wouldn't let me bring B, which was freaking annoying because NC's have been allowed before. Whatever. I don't even like that venue anyways because they MAKE you get a $40 stall even if you're just showing in one class. WHY.

Anyways, V and Yanks were there to slay. She has been working so hard lately and it gives me the feels to see her doing so well with my favorite old man. 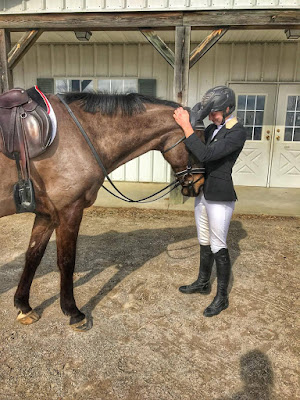 She signed up for 3 tests; first level, Novice USEA and Training USEA.

First level test was alright, but Yanks was uncharacteristically spooky at the judges stand and just a little tense. Not a shabby score with a 66%, but I knew she could've done better and they ended up 4th in the division (the division was SUPER close, like by hundredths of points). We discussed the test and she watched the video on lunch and came back to crush the USEA tests.


[if you don't have 15 minutes to watch dressage tests, I recommend skipping to the training test]


She ended up taking the top two spots in the USEA division with her Novice and Training tests. I think the Novice test was a 32 ( I can't remember, whoops) and was ridden quite well. Free walk could've been better, but overall I loved what I watched in comparison to last year.


THEN, her Training test. I honestly though this was the best they've looked together, despite it (possibly) being the first time they've done the test in a show (also can't remember). Truly was wonderful, especially in comparison to last year and I was literally crying by the end of it. Yes, they know the extensions need work, but she's just starting to learn them with him and he possibly could've had more trot but I was SO pleased with the cadence and relaxation. The other shit will come with practice and I am so so excited. Witnessing the blooming partnership with her and my best boy is seriously so overwhelming for me, I just love it. I think this is the closest to "motherly" that I might ever feel.


She is absolutely moving up to training this year, we just aren;t sure when simply due to XC. XC is the most dangerous part of Eventing (duh) and I want her to be absolutely certain that they know what they are doing. Its crazy of me to worry because its Yanks favorite thing in this world and V loves his gusto. But I can't help it! We don't have many chances to school XC, so I am erring on the side of caution, despite her killing it over fences this winter.

ALSO, his one year anniversary of surgery is coming up and its just giving me all the feelings and I cannot.

ALSO ALSO, a random aside, I FINALLY got the tattoo I've been wanting for ages but couldn't decide where to put it. This is #5, but it might be my new fav....

Then there's B. The other child of mine, who I fondly call "fucking dingus", "idiot" and "dum dum", has been intent on committing suicide apparently with two pretty ridiculous injuries in the last two weeks. OF COURSE right before people come to try him out.

Luckily, they have been understanding of this, but c'mon B.

Last week his cut  his leg up in turnout on god knows what and it BALLOONED. Luckily, it wasn't deep or too horribly bad, and went down after 2 days of cold hosing and was never actually lame.

Tuesday though, I had asked the workers to keep him on limited turnout (read; small dry lot for a few hours instead of 30 acre pasture with mud for 7 hours) to ensure his shoes stay put since someone was coming to try him Friday.

Oh, yeah, I put shoes back on per the suggestion of wise horsemen, stating it looks good for sale and shows he stands for shoes but also...

Anyways, I get a text at 3PM stating "B cut his face"

Um, cool thanks? He does it all the time bc he's a fucking dingus, so I wrote it off and put it away UNTIL I got the photo....

NOPE, was not. You could see the muscle in his face and a pretty good puncture wound to boot, so I promptly and reluctantly called the vet for stitches while also proceeding to have a mild anxiety/anger/fuck you horse panic attack in my car on the way to the barn.

The vet was rather humorous about it all and came in saying "what did he do this time", which I didn't laugh at, but should have because LOL. He was a good lad for the procedure and mostly just seemed tired and in pain, for good reason. We put him to bed and slathered ointment on the wound in addition to antibiotics and meds.

Yesterday when I showed up to tend to him, the swelling was even more extensive, which worries me, but I know its normal...


Poor dude is acting like he's dying but allowing me to cold compress his dum dum head and begging for cuddles (which he never does). I honestly feel bad for the dude, despite him costing me another vet bill. He should be fine in a few days at least but damn.


Posted by Checkmark115 at 7:27 AM 10 comments:
Email ThisBlogThis!Share to TwitterShare to FacebookShare to Pinterest
Newer Posts Older Posts Home
Subscribe to: Posts (Atom)