WHOAH. Got my paper written...but I didn't have time to do one assignment...whats 15 points? HA. Hopefully the hotel has internet....
Anyways, quickie here...headed out to Illinois in the blazing heat for Hunter Oaks. Coats waved all weekend!
Dressage at 9 something tomorrow
XC at 10 something Saturday
and Sunday is stadium
ugggggghhhh I HATE Yankee having to be in a stall with no turnout for 4 days... sadponyface.
Wish us luck!
Posted by Checkmark115 at 8:23 AM 7 comments:
Email ThisBlogThis!Share to TwitterShare to FacebookShare to Pinterest

I look at horses for sale... 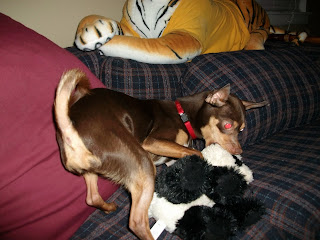 ....play with my woggie dog
...watch True Blood
...watch the boyfriend play World of Warcraft
...think about how I can make my horse gain weight without adding MORE grain (he already gets 1 1/2 scoops at every feeding)... 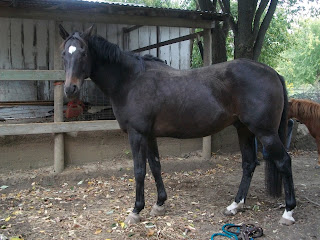 I wants him to look like this...fat and black...
...check off my to-do lists for the weekend (always fun for me actually)
...Play World of Warcraft (funnest most time consuming game ever)
...let you all know what I am doing...since I am sure you care SO much
...repeatedly re-check facebook for NO reason whatsoever..
...occasionally half heartedly find articles for my paper...and THINK about what I want to write then tell myself tomorrow is a brand new day...think of what I can accomplish! But th
en I realize I told myself that yesterday...however, I did finish both assignments (took like 2 hours), now I just have my 2 papers to write.... 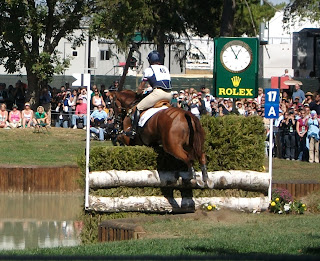 I haven't jumped my horse since July 3...
Horse trials this weekend...
Leaving Thursday now, not friday...
2 papers and 2 assignments, 2 shifts of work yet...
oil change needed in the truck...
115 heat index....
I  might esplodsies.
Posted by Checkmark115 at 9:41 AM 5 comments:
Email ThisBlogThis!Share to TwitterShare to FacebookShare to Pinterest

Due Dates and Horse Shows

WOW. I am absurdly horrid at due dates apparently.
In the past week I have missed the due date for 1 paper, 1 exam and completely F'ed up this weekends event...
...yeah I assumed the show would just be Saturday and Sunday like EVERY SINGLE EVENT I HAVE EVER attended in the past 7 years. Nope. It is a 3 day event. Dressage Friday, XC Saturday and Stadium Sunday. Meaning I need to leave Thursday. Meaning I need to convince my boss to give me that day off too...meaning she will be pissed because I've RO'ed like...12 days this month already...ooops. and then I bitch about not getting hours on the days I CAN be at work. hmms.
I need to actually WRITE dates down and actually READ what I write in my planner...gah!
So, the Hunter show(s).
Hotness. Sweatiness. Tropers. Late nights. Wild children. Caramel Apples. Half gallon mugs. Horse sweat. Motorcross. More sweat.
For those who want to read further...enter...

Since my mind is SO scrabbled..I can't remember the days I showed so it'll be days 1-3.

Day 1 was hot and muggy. per usual in Missouri. But extra hot since I had to be outside in my breeches and tall boots. The shows start at 7 though, which is nice for the heat, but bad for pictures.

Yankee remembered the show grounds from the hunter/speed show last weekend, so he was pretty chill...even if he did look (gasp) kinda coat ugly and not shiny at all. Thanks sun. 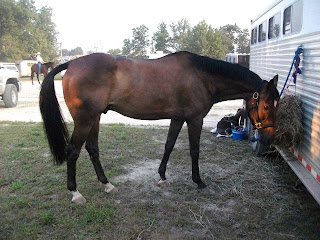 Tracy and her mom had most of the rides that day on their mares (L-R) Billy and Grace. They showed quite a bit and did quite well! Tracy is your typical hunter/western rider. She enters everything and wins or places well in pretty much everything! 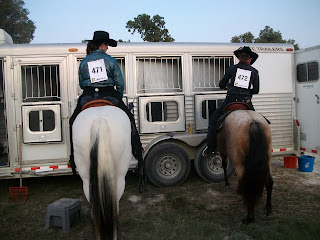 Tracy and her Momma

Yanks and I only had 2 classes so we chilled a TON. He was MUCH better on the show grounds and it was HELLA busy. It was fair week so motorcross was going on (LOUD) and tons of bratty kids were running about and lotso peeps were watching. He really could care less about them, he only gets hyper when other horses passs by him in the ring.

Strategy: stay in the middle of the ring to avoid idiots who cut you off and to keep the horse paying attention to moi.

It worked! His transitions were beautiful and he listened SO well! we came away with grand champ in the hunter division. Crazy since tropers (trantering lopers. you know, the head dragging, dead looking, lame looking QHs) usually kick ass...why, I don't know.

I've always had a tiff with hunter judges and people (thus why I quit) since usually the most lame looking, typey ones get placed high. BUT the judge liked Yanks and he was perfect, so obviously..we kicked ass at that show :) Won some Cha-Ching too...something EVENTING doesn't do....hardly. 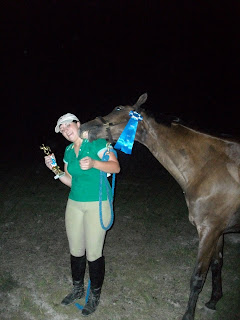 Nice one Yanks. He was tricky and waited till we posed. Bad pony.

Day 2 i didn't show, but Tracy went to the fairgrounds, so my fridn Lindz and I went to STL and then I played with my pony :) 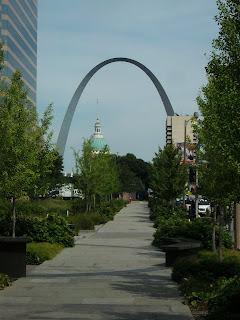 She was SO good! originally, I was just gonna ground drive her a bit, then drag the cart next to her since she's never been hooked up. However, she was so chill, I hooked her up. Then, I chanced it and sat in it as well! She was still like WTF ever mom. I'm bored now. I was proud! 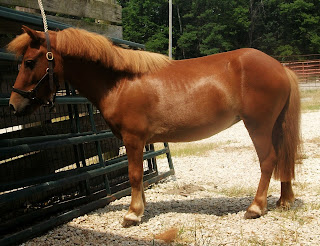 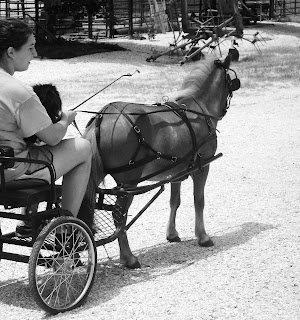 Later that night tracy took me to the fair. and DAMN was it a fair! Nothing like the Greene Co. fair where I've shown. Its AWESOME. We stayed till 1am watching motorcross, tractor pulls and chatting. It was SO FUN!

Day 3 was actually not too bad heat wise and I was excited...it was the big $$ show and I was counting on winning some. Yankee was SO CHILL (which was my MAJOR goal in doing these-besides hangin' with the BFF) and I was happy :)

The first class was the water glass class and it was SO fun. All the others had gaited horses and Iw as the only one with a reg. horse, but he trotted so slow for me, I came in 3rd! Won like $15 outta that, ha! Pictures on FB if you're friends with me.

The other 2 classes were hunt seat or english mixed and there were so many arabs! The judge was an arab judge so even though Yankee was on the money and was PERFECT (amid the demo derby right next door and the Travis Tritt concert goin' on), we had no chance. Sucks huh? highest we placed yesterday was 5th, still outta about 14 horses, but the arabs ruled it. Silly arabs.

I was still amazingly happy with Yankee and how well he behaved compared to last Saturday, and couldn't be happier with him!

However, no more hunter shows for a while..they are tiring and not really my thing. Mostly I did it for Tracy...but I did get a nice trophy and some $$ out of it.

For now, Ponyface is getting sun/mon off, light jumping school tues, dressage run through wed then we leave thurs for Illinois for the LAST event on our ticket this year. I am super sad and mopy about it...but I am realy poor...hopefully I can do a few in sept/oct but we will cross that bridge when we get there. 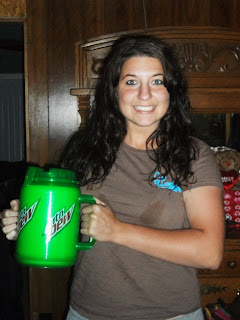 My awesome half gallon mug I bought! I drank 3 of these yesterday (water of course, I don't like soda much).

More pictures of the show on FB!