I haven't sold a horse (besides Lily, who was taken by the first person who tried her) in literal years. Like maybe ten full years. Back then it was a project horse I worked with and my trainer did all the dirty work for me regarding contacting sellers and setting up appointments, so this is one aspect of horse ownership I am actually incredibly not familiar with.

So of course, who do I ask?

Specifically bloggers, because thats my favorite avenue for help when I am in need.

I know I have been pushing/advertising him terribly, which isn't conducive to getting him sold by March, but I can only do so much when I'm not riding. Now that I am healthy again and can ride everyday its another story, but I felt bad advertising a horse for sale who actually wasn't really in work.

However, I do have THREE people interested in him and two are coming to see him this weekend. One of them is scheduled to come out in March (she lives out of state), which is of course kind of far but whatever works.

My question is, do I tell them ahead of time that there are others coming to look at him or do I say it afterwards like, "Just let me know your decision as soon as possible, I have two others interested and would like to keep them updated"?

I need help. I don't want to fuck it up/create drama where its not needed.

Regardless, he's been a total gem of a chesnugget and its simultaneously making me so so happy and incredibly sad. I will miss him. It still doesn't seem real that (hopefully) he won't be mine for much longer.

He really floored me the other day when we rode inside due to frozen outdoor and the lighting technician guy was there fixing the lights. He had his motorized ladder thing and was making a total racket. I decided to ride anyways because he needs to desensitization and advised the guy to ignore any antics. He told me that most people were completely unable to ride while he was in there and apologized in advance for ruining my ride.

I tossed B on the lunge just to let him look at it for a minute and I shit you not he barely even batted at eye.


This is huge guys.

I think a year ago he totally would have lost him damn mind and made it impossible to focus. But yesterday we had a gorgeous ride full of beautiful transitions, 10m circles and flying changes. He hasn't even touched the standing in about a week, so I can probably take that off completely for now. I was jazzed. 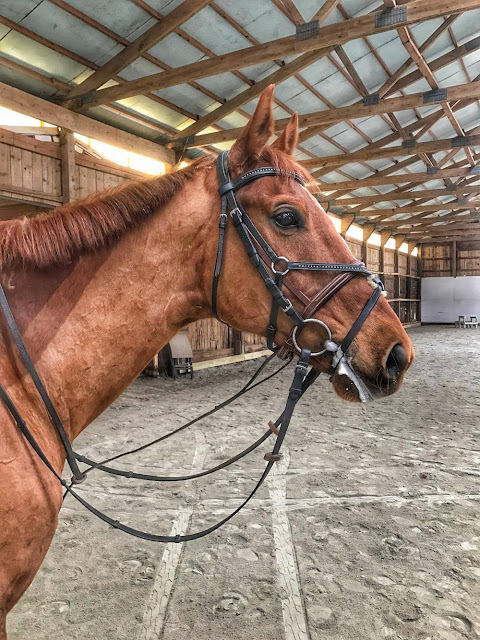 Posted by Checkmark115 at 8:08 AM 18 comments:
Email ThisBlogThis!Share to TwitterShare to FacebookShare to Pinterest

Besides being the most balls out crazy ass winter in terms of temperature fluctuations (fun fact: temp is rising by 33* today! GAH) its also been the first that my boys shoulders have not gotten a single rub. Interesting.

I have tried every blanket under the sun (literally) and have spent a small fortune on clothing my spoiled brats, to no avail. Every year they would start to pin their ears when I would start put their blankets back on and the dreaded shoulder rubs would appear despite my best efforts to keep them at bay with hair conditioner AND shoulder sleezies.

Last year, I replaced almost all my blankets with Amigo's, because sale, save for stable sheets. Luckily, the Amigo's layer well and I haven't had to use my older stable sheets at all. There was an epic deal somewhere (I want to say Dover) and I snagged four blankets for like $300, medium and heavy weight. It was like winning the blanket lotto. With those additions, I made a matching complete set for each of my boys, since they each already had the lightweights (nabbed them off ETT for dirt cheap). Unintentional matching, but winning nonetheless.


I am seriously in love. I don't know what it is about them, but the boys have yet to snarl at me when I go to put the blankets back on after a ride and they have not a one rub on their shoulders. I am also a fan of the quick closures that can be done up with gloves on quite easily. 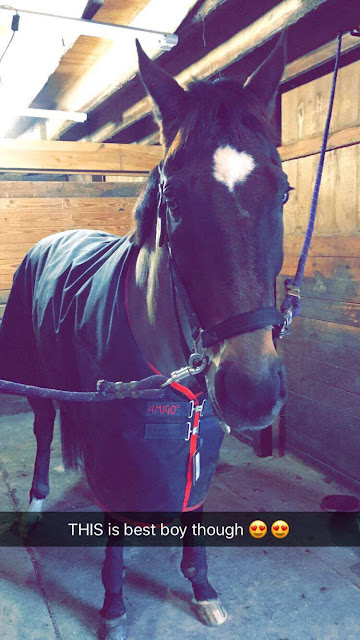 The only downside I will say is that they are not the sturdiest things. B is an exceptional shredder and he has killed two of the lightweights sheets already, and torn the butt on his medium. However, I am pretty damn good with a needle and thread and I just sew them up with wax thread and waterproof the rip afterwards. Better than buying a new blanket!


Otherwise though, I love them! Anyone else have blankets that have just really worked for them?
Posted by Checkmark115 at 7:17 AM 18 comments:
Email ThisBlogThis!Share to TwitterShare to FacebookShare to Pinterest
Newer Posts Older Posts Home
Subscribe to: Posts (Atom)