Still Can't Get Vids Up from EA

So I shall share some of my artwork...
We've been painting in class and this is my still life I am working on... 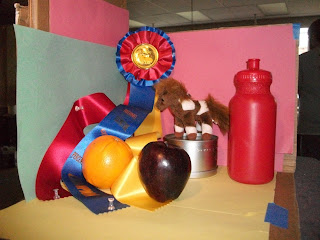 This is hour 4 of the project. The ribbon and the stuffed horse will be the most difficult but I am happy to paint them since it is subject matter I chose and love :D 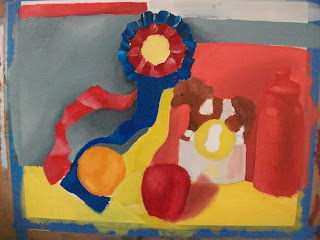 I hope to hang this up in my house when I am done since it is near to m y heart. I am going to name it "XC" since it has my eventing watch, my grand champion PC ribbon, my water bottle after XC, an orange for me and an apple for Yankee.
Everyday the setup changes since its moved from a shelf to my area, but I just need the gist of what everything look slike to paint it. I will take the best of all the days and mesh it together.
I've ben feeling rather artsy lately but due to my schedule I haven't had much time to draw/paint. I have been sketching in class though. 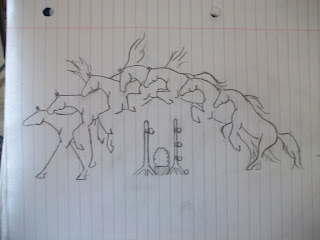 So I drew this in class in about 10 min....little did I know what it had in store for me! 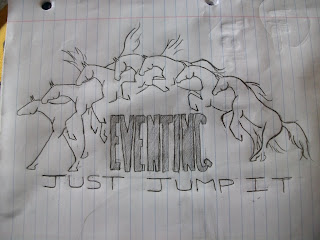 I turned it into this! I'm thinking T-shirt...
I've had 4 people tell me they would  buy one if I made them so...would anyone else like them? I plan on actually turning them into T-shirts. I'm going to fix the "ing" part since its too squished and make it dark blue on medium grey t-shirts. I think it will look ballin'. 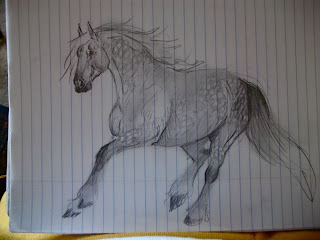 I drew this for my friend Matthew as practice for finishing up Klein and Stacey (for those who don't know, I am doing a picture for Stacey of her and Klein going XC, but I don't know if I will finish it in color paint or charcoal. I'm letting her decide). His mare is the same color as Klein, so I was working on dapples. DIFFICULT!
Anyways, getting back to studying...crosses fingers for exam tonight...
Posted by Checkmark115 at 4:50 PM 10 comments:
Email ThisBlogThis!Share to TwitterShare to FacebookShare to Pinterest

...If I had time to ride my horse...
...If it really doesn't rain for 7 days like they are predicting....
...If I get into the jumper show next weekend....
...If I pass my Math and Spanish exams this week...
...If paypal rules in my favor and doesn't make me refund the woman who is trying to rip me off (when will people learn how to read?)....
Posted by Checkmark115 at 9:23 AM 2 comments:
Email ThisBlogThis!Share to TwitterShare to FacebookShare to Pinterest

I hate Being Poor.

I wanna go to Rolex.

Everyone, shut up about going.

I hate you.
Posted by Checkmark115 at 7:51 PM 3 comments:
Email ThisBlogThis!Share to TwitterShare to FacebookShare to Pinterest

So after the whole tire fiasco, I ACTUALLY got to do what I intended to come there for. I was to ride with Daniel Stewart on Saturday morning at 930. I had braided Yankee the night before since I was in the breed demo later that day and I ALWAYS try to look my best. Espechially when representing myself, my horse or another organization.
It was actually blazing hot at 9 am that morning and i was dripping sweat. The arena was torturously hot and stifling, which sucked a bit.
This clinic was called "The Playground" intended to stress riders and make them think on their feet in order to help them overcome their showjumping fears. This was a perfect clinic for me since subconsciously (well,  not really) I am terrified of failing at a showjumping course. Ever since last summer and our major crash-through-the-course, I have been  a bit anxious about stadium.
I was excited and nervous all at the same time since Daniel is a big wig in the Eventing world. I rode with him once before when I was in POny Club a few years ago. He actually remembered me and Spirit!
So he introduced himself, as you can see in the video and the course and what we were to do. Yeah, I about shit my pants. To come up with a course while riding it in exact striding, combos and other specifications was extremely daunting.
He was not making it easy either!
The course was very tight, and I could not imagine doing some of the lines he had set up for us, the diagonal was extremely sharp, the rollback, tight and the bending line....double turns.
The jumps were not very high since the courses were so difficult and we were jumping them SO randomly. IN the 1st video up there ^, Yankee was very tense. There were a lot of ppl and on the other side of the building were vendors, bright and shiny and distracting. Also I messed up from the get -go. I didn't know he wanted me to jump the diagonal line too, so I slowed down...nerves got to me!
What he wanted us to do was a course. He would tell us what we needed in the course, but the rest was up to us. He woudl say things like, start with diagonal line, 6 fences, 45 strides or 7 fences, 30 strides end with THAT fence (and point) or he would say 6 fences, diagonal, bottle. He would throw a water bottle halfway through our course next to a fence and we'd have to change course (keeping up with specifications, while looking for the bottle) and end with the fence he threw the bottle at. IT WAS HARD!
I only suceeded 4 times out of like, 20, but it was an awesome learning tool! near the end of the clinic (DRENCHED in sweat) I was no longer nervous, but I was hungry for success and a little agressive.
I have been having major issues with the videos from the clinic. They didn't show up on my laptop so I uploaded blindly and only got like 5 uploaded. No pictures since it was too far to take any. Now, since my laptop crashed, I cannot get them to upload on my mac!! UGH! so all I have is like 4 or 5 online. I have some really good stuff too, hopefully I can jack the boyfriends laptop and upload them form there.
Diagonal Line Intro
vid 1 ( This was the 1st one I got, my grandma is hilarious in this)
vid 2 4 fences, 10 strides
vid 3 Daniel S. Intro
vid 4 7 fences, 37 strides, rollback, bottle ( I actually got this but he forgot what he asked me to do!)
to be continued....
In other news, got my USEA membership card today, 1st event MAy 14-16!!!
I rode yesterday in my new saddle for the second time and it was AWESOME! He had a week off to gain some weight back and rest up and he was feeling great. I only rode about 10 minutes but I just wanted some good work both directions. I wanted to jump today but I have a horrible stomach ache and I can barely move off the couch...tomorrow I think I will get up early and do some dressage or conditioning since i work PM. Studying for exam Wed. but I will do a quick Dressage ride, exam Thurs night so he will be off and I work Friday night so off again unless I get up hella early, which I may do. But I'm still recovering from 5am shifts, then school, then work for 7 days straight...Not what I want...but school is kicking my ass this close to finals.
Posted by Checkmark115 at 3:33 PM 3 comments:
Email ThisBlogThis!Share to TwitterShare to FacebookShare to Pinterest
Newer Posts Older Posts Home
Subscribe to: Posts (Atom)