What Do Wednesday: Missing Shoes

It's safe to say my life is momentarily in shambles, so I'm holding off on contest for a few more posts. It was supposed to be "happy 600 posts/ Bacardi Gotcha Day" but my sanity slowly has disintegrated over the last 7 days and I am officially driving the struggle bus. Definelty a 180* turn from last post. Whomp whomp.

I fear he is also slowly falling apart. I've yet to see him in this much disarray and is a bit concerning.

I do have some happy posts, mostly re Yankee. Saving those for later.

Also sprinkled about is some media from about 2 weeks ago when B wasn't actually falling completely apart on me. But still couldn't turn right.

In the last month he's dropped about 50 lbs, shredded his LF, become incredibly body sore, unable to turn right and legit lost his sanity along the way.

I had grand plans to head to a jumper show this weekend, but we can't even walk forward right now (literally) so that's sadly out of the question. My wallet is thanking me, since it's been abused trying to diagnose my precious, special snowflake horse. 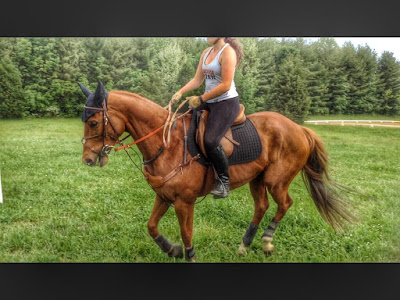 Around the beginning of the end of last month, following his annual round of spring shots, his body condition rapidly decreased to a point of extreme concern.

Not to mention the recent "heat wave" is really messing with him...he can't stop sweating. He has fans on him all day and he breaks out in a lather within 10 minutes under saddle. Thanks Ohio, for changing seasons so rapidly. He also has gotten the shit kicked out of him in the field and has tons of cuts all over, making him look even more bedraggled. Awesome. I think its Yankee to be honest...only horse that has been added to the group recently. GREAT. 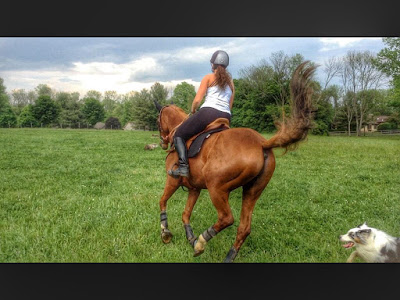 We upped his grain and hay about 4 week ago, to no avail. The vet thinks the shots fucked with his internal whatever's, and he will just need time to readjust, but damn, he looks like we are starving him. People have noticed. People have given unsolicited advice. People need to butt out. I am aware he looks like hell, thanks.

Secondly, and gradually, he has become more and more stiff to the right. Massage lady (who came out a few days ago) believes it is due to his teeth getting floated last month which is now putting his jaw in the actual correct place...but now he's sore and unfamiliar with the feeling and its translating to  tightness in his jaw, and soreness in his poll, neck and shoulders. 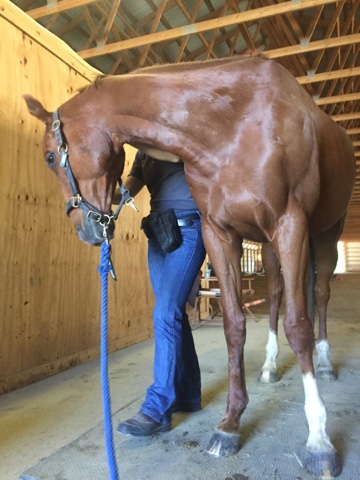 It makes sense, but is also frustrating. I started off trying to take him out in the field and do GIANT circles at all 3 gaits to keep him in work, but also work with the stiffness....but his mental state has deteriorated more and more each time to where the main "goal of the day" is 'walk without bolting, dancing sideways, half rearing, or kicking the air'.

I have been taking it incredibly easy, as in hacks only, but he is more and more losing his shit. As in brain falls completely out of his head and he can't even just walk around a field without going completely bonkers. Its a flashback to the old days when I thought he might kill me everyday. 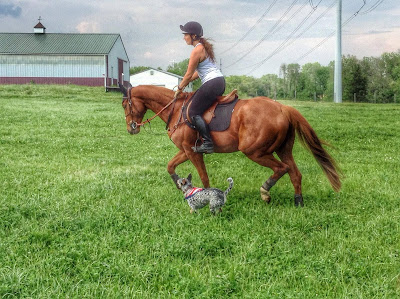 Whats bothering me is that I am purposefully taking it easy, just trying to get him out and walking around and loosened up and he's flipping his shit about nothing. Not asking for transitions. Not asking for a trot. No changes, no cantering, nothing.

Then, he threw a shoe last week. I rode him twice in that week, at the walk, in the grass field, asking for nothing and he was horrendous.

So that was lovely and even more discouraging. I cried actual tears  on his back. It was fun.

I felt terrible, because I had attempted to ride with no shoe and looking back, felt guilty about asking him to walk around....but its not like I was jumping him in an arena or taking him on the road. I stayed in the  grass for a reason and at the walk for a reason. 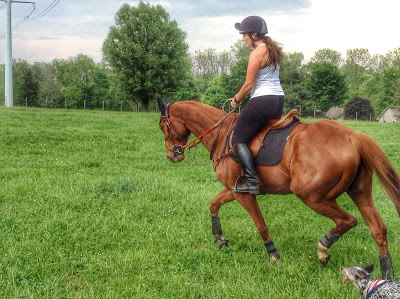 But, it has me questioning everything right now, and I am feeling all the feels. I decided despite trying to keep him in some sort of work, to leave it be until the farrier can make it out.

I doubt the lost shoe is the actual cause of his recent issues, but I felt guilty enough about it that I can't make myself work him until its back on. It doesn't feel right to me.

Normally, my horses have been great with no shoe for a few days as long as I keep them on the grass with low work. I know a lot of horses that completely go lame with a missing shoe, but thats not them. 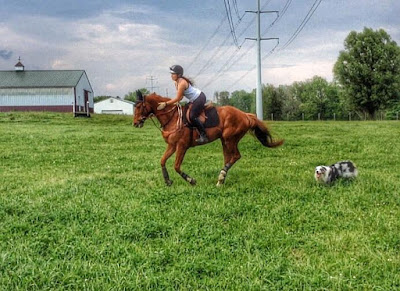 Either way, I feel terrible, like I've caused his recent bout of shenanigans, but all I can do is try and fix him the best way I know how. First and foremost, get the shoe on. This was difficult with the holiday weekend, but he should be out today. Then, maybe another few days off, then slowly reintroduce hacks and then flat and maybe some jumping.

I just feel kind of lost on this one. Its like he's disintegrating before my eyes despite my best efforts to keep him together.

What I want to know this week, dear peoples, is what you do when your horse throws a shoe. Do you keep them locked in a stall? Do you duct tape the foot? Do you try to keep riding, but in light work? Or do you toss them in a field until a farrier can come out?

I must know, what do.
Posted by Checkmark115 at 8:33 AM 29 comments:
Email ThisBlogThis!Share to TwitterShare to FacebookShare to Pinterest
Newer Posts Older Posts Home
Subscribe to: Posts (Atom)