We Have Work to Do

So it's now been 2 weeks since Yankee's ordeal began, and it's starting to feel a little bit normal again. Only a little bit.

Forever grateful for the outpouring of concern and well-wishes my big guy has received. He's my OG, and i cannot imagine my life without him in it!

I've been adjusting to the fact that I will soon go from riding one horse exclusively, and boarding (I've gotten spoiled),and will now go to caring for two special case OTTBs and continue riding Bacardi. Let's face it, he's special too, haha! ALL THE OTTBS!

As soon as I got used to the idea of Yankee coming home to our farm, and all that entails, I was sent full body photos of my dearest thoroughbred by his caretaker.

I staggered. I gasped. I almost cried.

He looks atrocious at best.

Not only did he drop a significant amount of weight, his coat and hair look scraggly and he has lost all muscle tone. We have a lot of work to do. 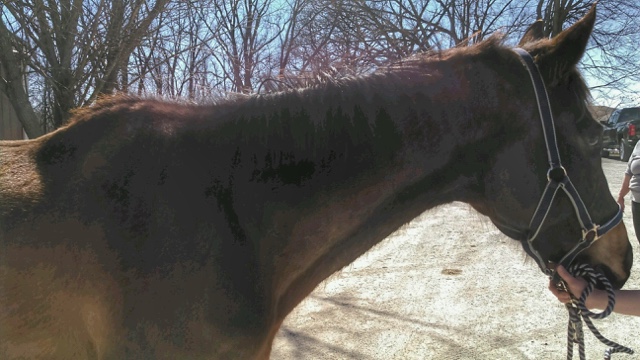 Luckily, his caretaker is actually a vet student who's outside her clinicals and almost a real vet, and very well equipped with brain knowledge on how to assuage his poor body condition. She's been an absolute Saint, tearing him like her own and sending me daily updates and pics. Also, his surgeon conveniently boards at he same facility, so she's able to monitor him as well. Handy.

For now, he's secluded to stall rest and minimal hand walking to graze. He's loving that option, and I've been told he's eating his hay like a champ. All digestive systems seem normal, but he still can't have grain. He's getting about a handful a day right now.

In addition, he's being treated heavily with gastroguard (bye the rest of my money) so hopefully this repairs whatever ulcers he had. I believe the vet said we need to utilize this treatment for 3 more weeks. 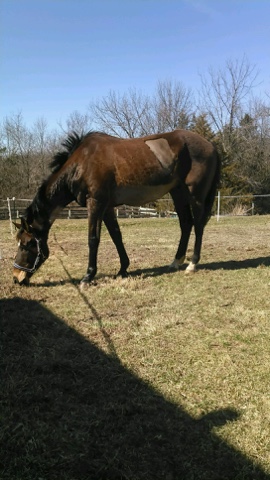 I can't help but feel responsible for all of this. Never in my life have one of my creatures ever look like a neglect case. Of course, he underwent major surgery, but I was not prepared for the end result and having to start from negative square two in our weight gain journey (again). Luckily, Yankee hasn't been the problem child with weight gain, so I am hoping as soon as he's cleared to eat grain, we can fatten him right up!

Post op plans are as follows, directly from his surgeon;

Mar 1-20: stall rest,  light hand walking and grazing
Mar 21-April 20: Small turnout, and extended handwalking (this is when he can potentially travel to Ohio as well)
April 21-May 20: Turnout in pasture allowed
May 21-June 20: Light flatwork can be introduced, increasing steadily
After June 20th if healed and strong, can resume jumping

So this is promising. I've done extensive research, and most horses return to normal work afterwards. I am incredibly nervous about reoccurring episodes of colic and the financial burden of that possibility. He sadly no longer qualifies for insurance, and he is showing a steady pattern of colic becoming a happenstance. Nervous horse mom is nervous.

Overall though, I am eternally grateful to all the horsey gods for keeping him with me. I am excited to smush his face again, as I have missed him!

Posted by Checkmark115 at 7:55 AM 10 comments:
Email ThisBlogThis!Share to TwitterShare to FacebookShare to Pinterest

I Believe in Magic

I shall give a proper update on the Yankee later this week, with pics, and also a rundown on Bacardi's massage today, with pics! (and video!). ALL THE MEDIA.

Lately though, despite my lack of blogging, I have been riding. Like a bad eventer, I have not technically ridden in my dressage tack since he snapped my new bridle and I got new saddle, but hey, we are riding! I am LOVING this new saddle too, and I feel like we are adjusting well. Bacardi seems to have really taken to it, and feels wonderful in the shoulders. I am having a tough time getting used to all the room I actually have, after riding in a 16 inch for a literal decade, so don't judge my flopping everywhere!

What I really wanted to share though was the absolute magical powers that Liquid Titanium seems to have.

Behold, the Bonnet of Glory. 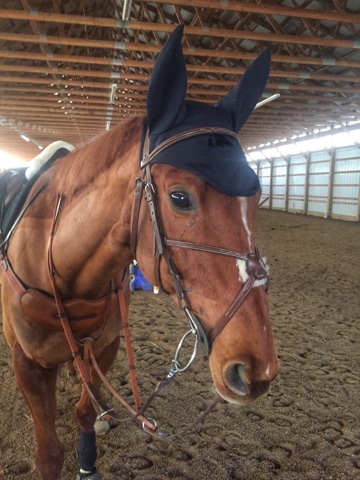 Its actually very plain, and try to ignore the giraffe ears, but it is real magic.

Jackie suggested it after hearing testimonials from other people and how they swear by the Fenwick Farm products. I was skeptical of course, obviously, but after BOT products...I decided to "splurge" with my tax return. In addition to purchasing another BOT pad in white for dressage, I also snagged a bonnet from Fenwick. Here's the link if anyone wants to read about it.

When I first used it, I felt like it was a fluke because it was a warm day. He's generally better on warmer days, but they had also been in about a week due to weather and rain, so I wasn't sure. 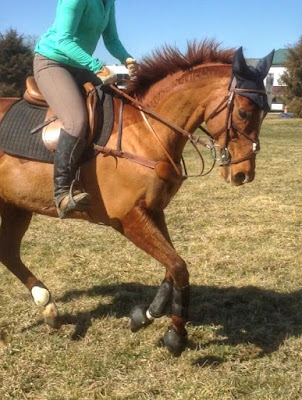 The real truth came last week when it was freezing, windy and cold and he still was just, "meh, whatevs" about literally everything. Its like an actual calm switch and I am a true believer. For-rills.

So with my little friend, we have had some incredible rides lately. He's been nailing his changes, staying mostly relaxed through up and down transitions and truly showing up to work overtime. No battles of anxiety, no explosions. Its eye opening.

Here's a little video I put together of our schooling on Sunday. the fun part is in the middle over the jump course, so if you have ADHD with blogger videos like I do, scroll forward to about 30 seconds in. If you dont like how tiny that video is, here the link for the youtube video.

So we took advantage of the nice day after running through the course set up inside a few times. I have a horrendous chest cold and literally suffocate while trying to do anything but sit still, so I was attempting to not die the whole ride. 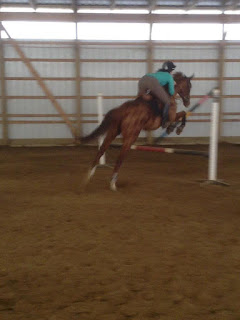 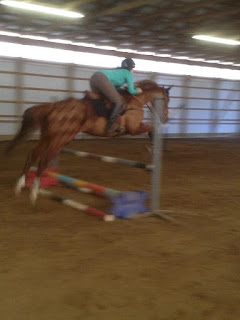 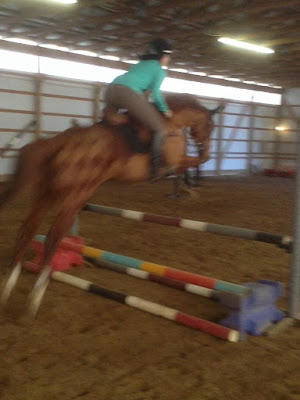 Speaking of not dying, he slipped after jumping the ravine and somehow scrambled and saved us from eating dirt. Go pony. 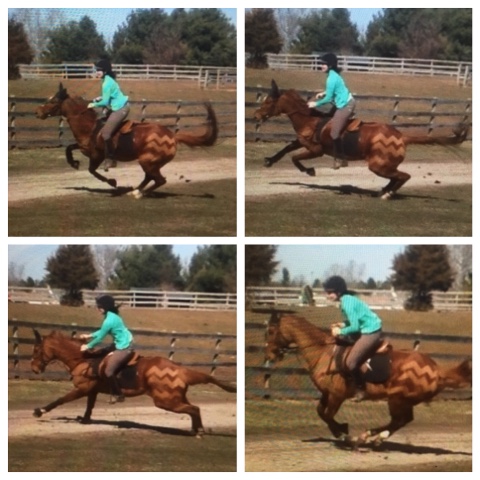 He was totally game to splash through the water and jump the ravine and didn't bat an eyeball at them. I was thoroughly impressed with my lil eventer. Here we come USEA BN level (if we can afford it *giggles with anxiety*) 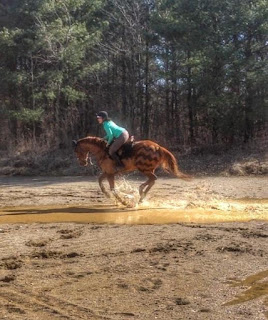 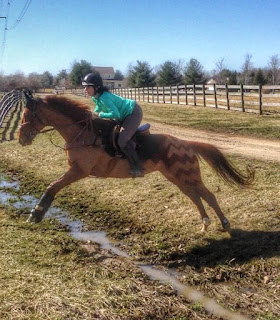 After playing in the water a bit (sorry Supertrainer) trying not to tear up the ground too much, we headed out to the field to do a little flatwork in our jump tack. 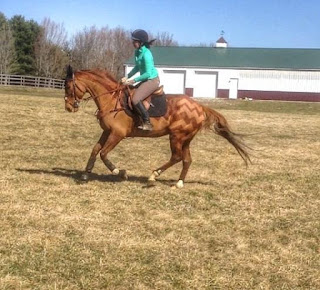 Hello uphill canter. We played with this canter and dabbled inlaid changes on the flat, in which he was only sassy once. Love. this. horse. 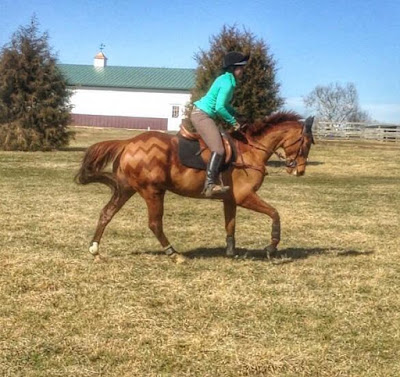 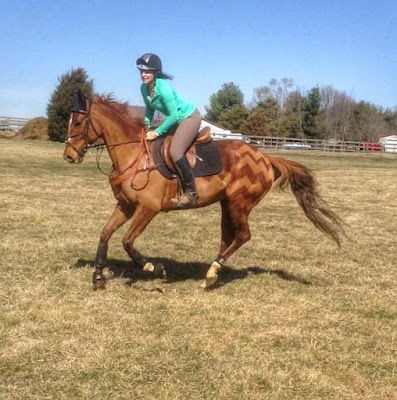 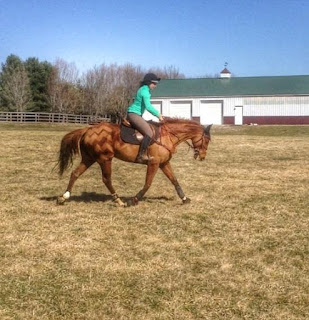 Overall, fantastic ride that has been our recent norm. Up next is a Yankee update and then the rundown on Bacardi massage therapy. Stay tuned and happy Tuesday!

Posted by Checkmark115 at 11:54 AM 8 comments:
Email ThisBlogThis!Share to TwitterShare to FacebookShare to Pinterest
Newer Posts Older Posts Home
Subscribe to: Posts (Atom)