Half a 5th Leg

...wherein I fuck up repeatedly and Yankee acts like its nbd and keeps up the badassery...most of the time.

XC schooling was well worth the 4 hour round trip and $145 I shelled out in fees, gas and caffeine. And my bestie, Jackie and her mare mare, Isis came, as well as our wonderful photographer, B. Quite worth it indeed. 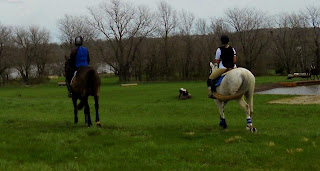 Considering we will be jumping each fence at the event in two weeks that we tackled on Sunday, I am feeling a little more confidant that we won't have a refusal...if I can keep my shit together. Most of Sunday went well, unless you count the wonky barrel line and that damn bank down into water to the pesky bank up/ one stride/ log element. More on that latro.

Most eventers would give their left tit to have a solid XC horse that will pick up the slack when we get tired or royally screw up. AKA, a horse with a fifth leg. I am blessed to have one with half a fifth leg. Why half? He eventually gets tired of my shit and flat out refuses. I deserve it.. *Most* of the time hes like, "oh you arent really sitting back and focused, its fine mom, I got this" but sometimes Yankee is just like, "No. NO thanks. I don't really feel like it since you aren't pulling your weight around here, mother". I appreciate him doing more than his part and I love him for it. He really puts up with quite a bit.

But I'm getting ahead of myself.

Sunday dawned WAY too early. Jackie and I both had about 4-5 hours of sleep thanks to our pesky jobs. Damn that money. I hate it. JK I LOVE IT LOL. We loaded up and drove to Kansas, chattering about the day ahead, horses, shows, boys and bitching about dumbasses at work. Once we arrived, we let the horses graze for about half an hour, then slowly booted up, screwed in studs and tacked up. There were literally a million people there and of course we all want to ride as soon as we get there, so it was kind of a clusterF.

We also spent a MAJOR amount of time swooning over our new Dalmar XC boots (see front legs. I also have sports wrap underneath for support). Like seriously....best $92 I ever spent. I can't even. We are too legit now. Euro pad, 5 point AND dalmar?? Kill me  now, cuz I would die happy 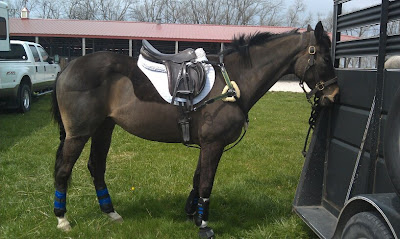 We started out low and slow, letting the horses get used to the surroundings. Jackie was a little tense about the whole XC thing but slowly learned that Isis is kiiiiiind of a XC badass. 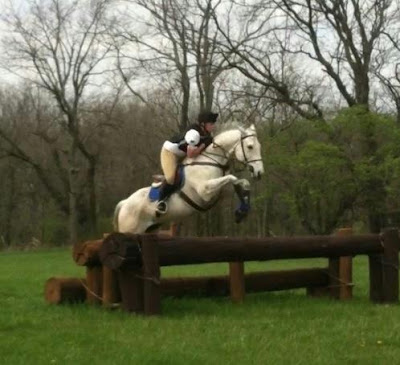 From there on out, Jackie jumped most of all the things, even some training jumps, which Isis beasted. I think we might have a nice eventer on our hands here after all! Hopefully she got in to the event, but there was a discrepancy with the online entry.

(So I tried to post these in order, but of course blogger is a dick and decided to do them all at once and OF COURSE wont let me move them, so this will be a little disjointed but its fine.)

Yankee has always been game for pretty much anything, that was until our *incident* 3 years ago, and the rough fall I had XC 2 yrs ago, which shattered my confidence. Shit happens when you event. I LOATHE admitting that, but its true. I no longer have the big girl panties or give no fucks that I used to. Perhaps its a good thing, but I see it as a pain in my ass because I ride like dookey most of the time. I am afraid he will refuse, so I squee forwards, quite riding and brace. Most of the time he jumps. Sometimes he doesn't. And then I get tossed about, lookin' like a fool. When I'm *mostly* on though, he puts for a fantasmic effort.

Video of that HERE

Sometimes, I tell him to do something (not jump a jump and go around) and he feels he doesn't have to listen and jumps anyways. Then we get reindeer games like this....
I appreciate the effort Yanks, but now I just hauled on your mouth, slammed your back and risked a fall from both of us. But really, I'm not mad. I guess its cool that you jumped a big ass Prelim fence from a horrible distance and angle.

One of our two MAJOR issues that day was the banks up/down in water and the barrels (which I will get to). Normally Yanks is the one with the slight down bank aversion, but with a swift kick and a HAH! HAH! (my eventing scream. If you event, you know what I'm talking about) he gets right over, er, down it. Sunday though the instant I headed towards this bad boy (prelim down element).... 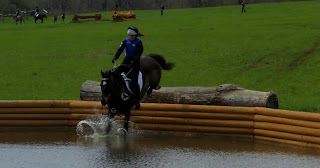 ....I saw my ex trainer/employer who I had a HORRIBLE TERRIBLE AWFUL fallout with. I panic. Not sure why I care about her opinion. But I do. So of course we flail and I lose my stirrups, crop and end up hanging off his neck, barely hanging on. I take it again, same result. Ok, fuck that fuckery. We move to the training- up bank, one stride to log. Refuse. Again. Refuse. Again, almost fall off. GREAT. I guess when I'm trying to impress people I actually end up sucking...like really bad. I should try  not to do that anymore.

We ended up doing fine once she left so I'ma go ahead and blame her for that one. HA. Normal up banks were Gucci, I just can't maintain my position...Yanks doesnt normally care and carries on while I re situate.


The second issue we had was over these damn barrels. The barrels themselves are nothing to bat an eye at. Not really big, not a hard approach..until you add the most fucked up line I've ever seen in my life. It literally was like this / times like 4. It was steep. I didn't like it. SO Of course I freeze up. almost fall off over the first, get a nice refusal over the second.

All shook up now.

try again over just the first. Refusal. Awesome. Again. refuse. Again, reeindeer games. COOL. So we end that and revisit afterwards. I was crushed. How in the hell could I event if I couldn't even do the course. WE were gonna get elim I just knew it. I *almost* quite right there, but had spent too much on the trip there. SO I cooled off, schooled some lower stuff, then moved on to other stuff, then came back. Nailed it the first time. Yankee is an honest boy, but over a tricky line like that, he needs help. He can't do it alone, so he refuses, with good reason. I suck sometimes haha.

The jump below was also equally as terrrifying, but I stared at the trees above it and he hopped right over. Not only did it look massive, but there is a nice drop afterwards. I'm pretty sure this is on the training course, but it looked scary enough to be prelim. 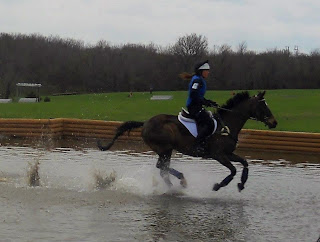 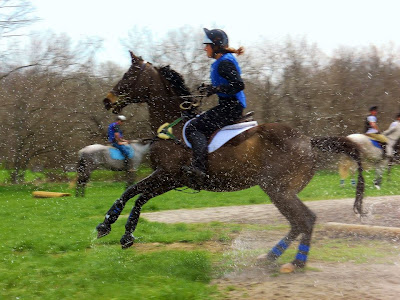 This last picture is of the scariest fence of the day. I almost peed my pants looking at the width of this fence. And its only training! Are you serious right meow?! Are training fences on steroids these days? Like, shit. I pointed Yankee at it, kept my leg on, stared at the sky and he gave me an effortless jump. God. I love him. Now I just hope we can do that at the event. 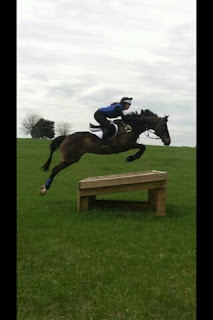 We rode for almost 3 hours, not of course all at once. There was a lot of walking. But we also raced. It was...MAGICAL. I've never let Yankee run full out before, or raced another horse. It was full power forward and I was in heaven. Yankee had a BLAST too. I think Isis did as well ;) She is damn fast too.

We gave them nice bathes, washed our tack, let them graze, then wrapped them and headed home. 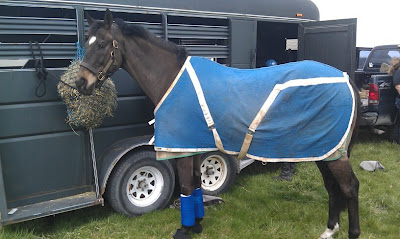 SUCK.
Posted by Checkmark115 at 2:30 PM 14 comments:
Email ThisBlogThis!Share to TwitterShare to FacebookShare to Pinterest

I Procrastinate and Sleep Instead

I shall be posting later today about Schooling Sunday! 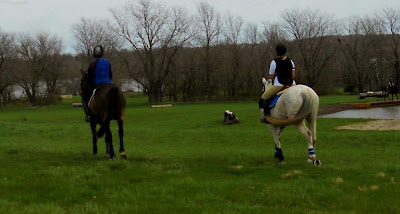 Posted by Checkmark115 at 10:14 AM No comments:
Email ThisBlogThis!Share to TwitterShare to FacebookShare to Pinterest
Newer Posts Older Posts Home
Subscribe to: Posts (Atom)