So, procrastinating writing this paper...
I've been thinking deeply about where to live after I graduate. I want to live in the (deep) south, but I HATE heat. But I LOVE the southern hospitality. The boyfriend is from the deep south, and his family is just so amazing. Nicest people, rib-stickin' food, scrumptious sweet tea, hospitality...
But I REALLY despise the heat. Like, really. There is AC for that, but the WHOLE reason I want to move to the south is for the horses.
So, places to live
Top 3 being,
I've done some pretty extensive research on these 3 states, but I am sure as most of you know, moving is EXPENSIVE. And the BF and I don't want to risk moving willy nilly and not being able to get a job.
TONS of things are going into this decision. Community, crime, COL, weather (big one for me), horse community (Horse Trials, instructors, prospective clientel, etc)  the ground (for barns, arenas, etc), travel (from home, OH, airports, etc), schools (for future childrens)...etc etc
I am ancy to move away from MO and OH (since Ohio is the asscrack of the midwest) but I want to choose the right place for us. I LOVE cool weather, but I also LOVE the horse world. I am willing to give up my love for cool weather for the best horse community.
I am looking for an area that is rich with eventing, or dressage/jumping for that matter. A place where I can call home. A place where I could start up a business, wether it be with horses, art, etc.
Any suggestions, readers?
Where do you live?
Whats it like, horse community wise?
Posted by Checkmark115 at 9:57 PM 14 comments:
Email ThisBlogThis!Share to TwitterShare to FacebookShare to Pinterest

Its SO hot.
Currently, 102 degrees.
110 with the heat index.
It was 103 yesterday, 112 with heat index.
I. am. melting.
And missing my horse.
I think I might die in the next 24- hours so if you don't hear from me, send out the search party. I have work from 10am-2pm, barn duty from 3pm-430pm (in the raging heat) back to work to cover a shift from 5pm to 9pm. Also, a 10pg. paper due by 11pm tomorrow, a 7pg. one due Tues, a 2pg. one ALSO due tomorrow and 4 sets of questions due by 5pm tomorrow. UGH.
Thanks a heap prof for NOT telling us we had the 10 pager due tomorrow.  THEN from there, I am heading out to STL again to show my wonderous beautiful (hopefully calm) pony and that show will go till about 3 am....Friday we are hittin' the town GONNA SEE HARRY POTTER!! WOOP! The BACK to showin on saturday, that will go till 2am or so, then BACK to Columbia, with horse is tow, and I work SUnday night 4-midnight. OH mah GAH.
I might die. Or melt. Whichever comes first.
Posted by Checkmark115 at 2:40 PM 2 comments:
Email ThisBlogThis!Share to TwitterShare to FacebookShare to Pinterest

Yesterday I got off work at 1PM and blitzed to the barn to hook up and head out. I made it to Tracys house by 3:30 and we headed up to the showgrounds after that. It was super crowded, there had to be at least 100 horses there.
I signed up for the flat classes hoping he would behave and we could rock out like we used to, even though hunters aren't my thing. However, the hunters in my class were all jumpers or dressage horses, lol besides Tracy's mare, Billy, who won the hunter classes. 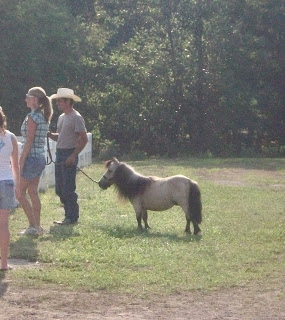 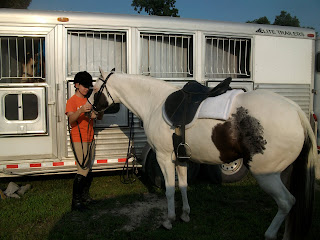 Tracy tacking up BIlly for warm up 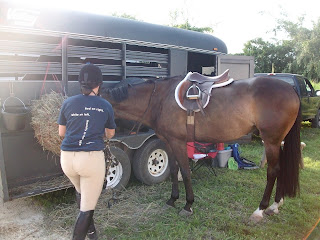 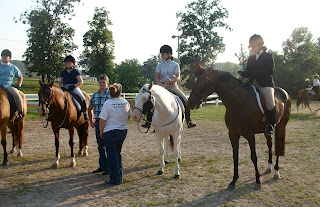 Both of the flat classes actually really sucked. Yankee thought he was on the track again and everytime a horse passed him he tried to bite them, or kick out or buck, so it was a beautiful trainwreck of 2 classes, ha. However, he had his moments.... 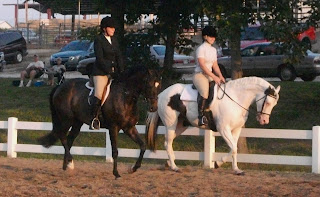 ...where he looked good. Tracy and I laughing at something.
When he loked good he looked great, but the judge told me in line-up she caught him all 4 times he bucked in one class, and the class where she was going to pin me 1st, she caught him the ONLY time he bucked. Brat!!! I was kinda mad just because I came to this in hopes he would get some show experience. Oh well, still had fun with Tracy. 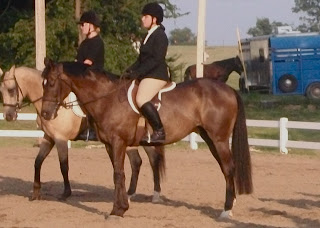 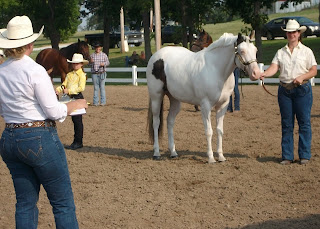 Kim, Tracy's mom, showing her mare, Billy.
So yankee got a huge break (like 4 hours) while the western pleasure was going on when I decided if he wanted to be a retard and run like crazy. Fine then! Remember when I said I wanted to try barrel racing in the spring? WELL. WE did!
HE LOVED IT! Too much...he started off great, fast, sitting on his booty, turning with the lighest cue, coming back from the dead gallop to a halt...almost like a QH, in ALL ENGLISH tack, ha!! All the Westerners couldn't believe I STAYED in the tack. Um, not hard when you KNOW how to ride! It cracked me up how terrible they were, balance wise. If they didn't have western saddles, or a horn, I am certain half of them would have fallen off.
There were about 40 runners in each class, 2 poles and 2 barrel classes. He was so quick, he was only about 5 seconds off the pro QH leaders. I was impressed that my big TB could almost keep up with the quick, nimble, tiny, QHs trained for this. He even switched his leads through the poles!! Crazy.
After a while though, he started getting kinda hyped up. for the 1st 2 runs he was fine afterwards, standing calm and cool like a gentleman. I was so happy! It was getting really late though by the barrels class (1:30AM), and he started to get bored, ancy and tired. I ran the first barrels and he was pretty bad, pulling on me, on the forehand, etc. His gallops were great, but since we were only doing this for fun, I didn't want him to stop using himself properly and running through my aids, so I scratched the last class. 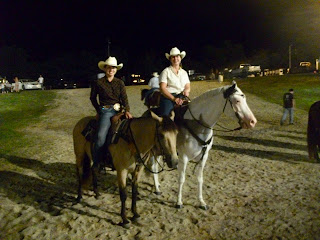 Tracy and her mom
Overall, it was really fun and I hope next time he behaves a bit calmer...I want him to get better at enhancing his calm, but also, some cash payback would be cool :) Tracy finished and all I wanted was sleep and food. i hadn't eaten in 16 hours or slept for 21...I was pooped. We konked out at 4AM and today I got up at 10:30AM. Kinda tired.
Yankee is staying at Tracy's for 3 days, and he is getting the days off. Its supposed to be 105 with heat index of 112 till Wednesday...ZOMG!
Posted by Checkmark115 at 7:59 PM 6 comments:
Email ThisBlogThis!Share to TwitterShare to FacebookShare to Pinterest
Newer Posts Older Posts Home
Subscribe to: Posts (Atom)