So its officially been 7 weeks since my precious Pants left me. I've been prolonging this update because I've been denying that he's really not here.

I could not be happier about where he's gone, dont get me wrong about that! Its just difficult to adjust. He's been by my side for the majority of TEN YEARS. And now he's just gone. Its hard.

He settled in with his buddies, Nugget and Huey, like a champ.

For a few weeks they just hacked him around and let him settle in. I got constant updates and snapchats because I am a nervous nelly of a horse mom. I knew he would be just fine, but I had to be annoying for a little while.

They were a little surprised with his spunk, which I worried about at first, but they loved it. he's not your typical "old man: or even OTTB. Hes spunky, but respectful. he just loves his job and wants to show it!


They took him for gallops, and did a few flat sessions. He has a massive pasture and is spoiled beyond belief.

And then they took him for his first official dressage lesson!

They said he was great! A little adjustment time was expected, but they were super stoked with his background in dressage and can tell he knows his stuff.

A few dressage lessons later he's fully settled in and raring to go. I get nothing but positive feedback and love for my boy. For which I am overwhelmed with happiness about!

After a few weeks of flat lessons, they finally took a jump lesson and learned what I was talking about with " the little engine that could".

He LOVES to jump. Its his fucking job and he is a BEAST.

I wish I could show the texts  L sent me about him but I was just like, yeah, sounds like Yankee. Wait till you take him XC!!

He even gets to wear fancy tack and be the spoiled King that he is. Please swoon with me...

They then informed me after a few jump lessons, that they planned to spend the winter competing at local jumper shows to get some experience with him and leg him up for the first USEA show of the year in March. MARCH!!

Yankee of course, was a true gentleman and scholar and kicked some ass at the show.

For the first time out, 5 weeks weeks after arriving, I couldn't be more happy with the results.

I wish I could show ya'll the video, but take it from me, it was glorious.

They're already talking about the 2016 season and going 1* and i'm just like, dying, of happiness. 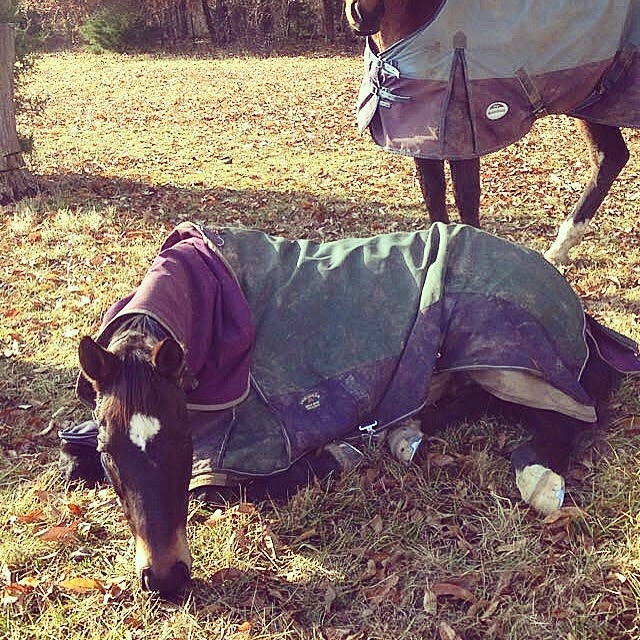 Posted by Checkmark115 at 7:18 AM 9 comments:
Email ThisBlogThis!Share to TwitterShare to FacebookShare to Pinterest

Well, all the positive vibes I was attempting to send myself in the last post did not work and I spent NYE, NY day and the next 4 days with the stomach flu. That was an unfortunate start to the new year, but, shaking it off, and trying to begin on day 6!

Can we please note Saturday was almost 60 and it POURED (we got 4 inches of rain, then it froze solid) and now its OH, ONLY 8*? I hate Ohio. Its literally the worst state. I swear. Never move here. At least CO and MN are consistent in the frigidness & there are no surprises. 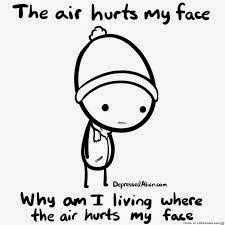 I would like to point out Wednesday is now forecasted at -5* and Thursday is a chilly -9*, without windchill.

That being said, I am going to remain POSITIVE. Positive things: poop freezes in the cold, and it makes stalls a breeze to clean! Yay. And the barn door freezes shut so you have to put in extra cardio hauling manure buckets and going around to the back of the barn! Woo! Also, its virtually impossible to do anything of real value when the mercury dips below a certain level, so yay netflix!

Also Levi was having a major happy spaz attack and it was super precious. 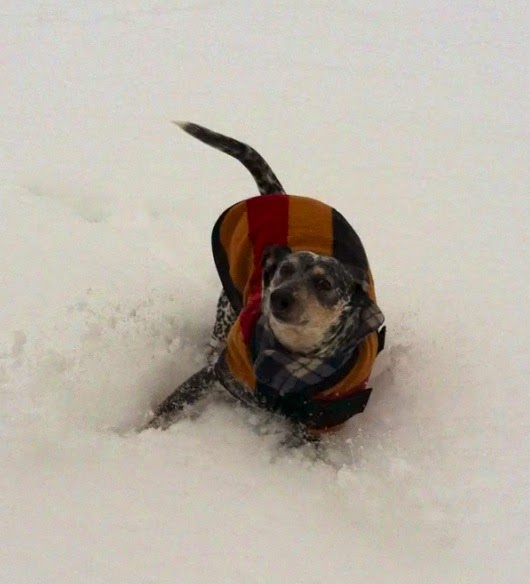 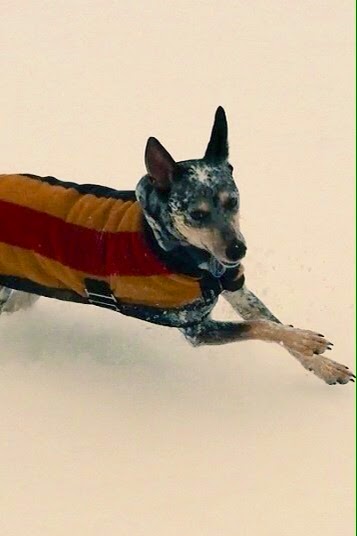 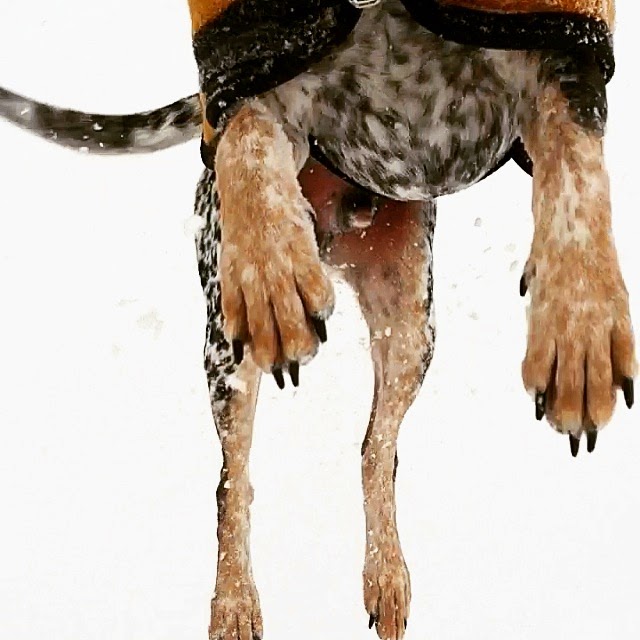 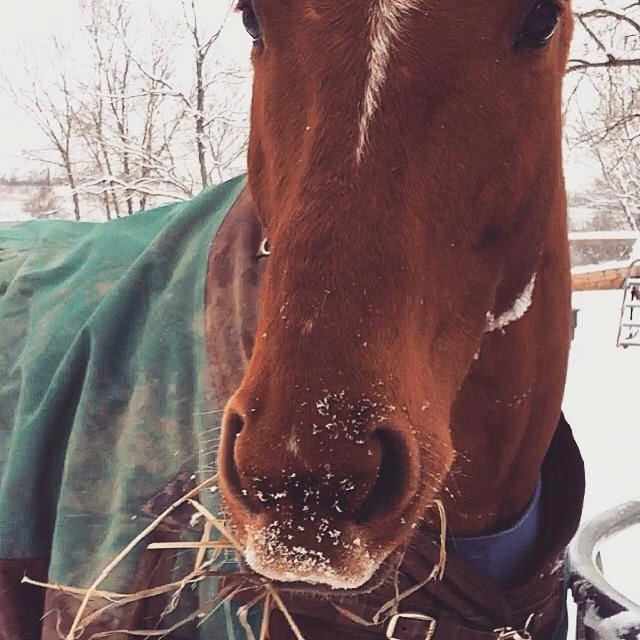 In addition to all that happy, The Faja and myself bundled up and hit the trails because we are insane woodland people that don't give a fuck about phalanges.


We might be a little cray, but I was SICK of being cooped up in the house feeling like a useless turd...and fuck mothernature, I will conquer you even if my toes are freezing off!

I did not expect much from "The Baby" (I can no longer really call him this since he is now SIX, but, since he acts like an imbecile 78% of the time, he earns it) today since the windchill was about 0* and he hasnt been worked in over a week, but he was surprisingly good.

One minor major bucking/bolt incident involving a nasty leaf and some sound in the woods, but he recovered quickly and thoroughly enjoyed the ride afterwards. I think.

He was really brave and even stepped over a few sticks.

Even old Lilly Belle kicked up her heels and spat out a canter. It was adorable and not at all naughty.

We mostly walked since Lilly hasn't been ridden consistently since Oct and not at all since the end of Nov, but it was a magical and breathtaking.

But it was pretty. And we did canter once and trot a few times without mishap. And ya know, pictures.


Maybe one day I will get around to a Yankee update or making some 2015 goals, but all my energy is going towards not freezing to death/trying to do something with my life besides binge watch Greys Anatomy.

Seriously contemplating hanging up my tack for the winter.
Posted by Checkmark115 at 8:01 PM 9 comments:
Email ThisBlogThis!Share to TwitterShare to FacebookShare to Pinterest
Newer Posts Older Posts Home
Subscribe to: Posts (Atom)