I generally have a rule about NO RIDING under 20* because reasons, but I texted V when I was at work around 2PM and was like, "SCREW IT meet me at the barn at 4PM and bring your camera" because it was snowing big old fat flakes of snow!! 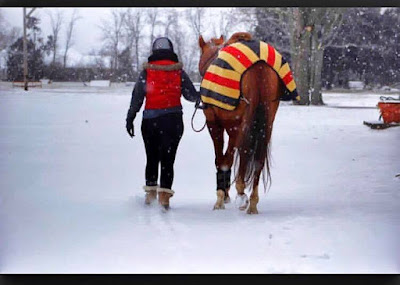 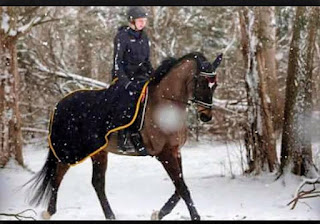 Literally, and especially since B is up for sale this may be our last snowstorm together and I really wanted some majestic pics even if it was 10*, windy as shit and I'm nursing another head cold. But I'm a total photo whore and everyone knows it and the opportunity was perfect.

We tacked up faster than I ever have before and wrestled our annoyed beasts outside (OF COURSE we were riding right at feeding time and they were PISSED at us) to frolic in the newly fallen snow. 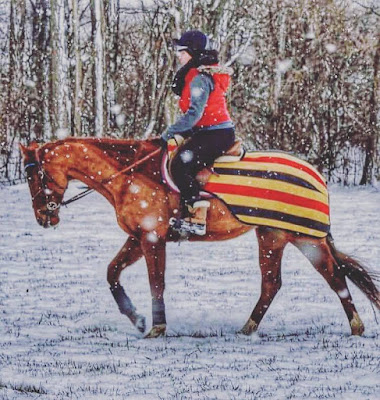 Never mind that I had on about a million layers and looked like A Christmas Story, it was fun even though all I did was walk B. He was extra lit, since it dropped about 40* in one day then snowed and we pulled him away from the hectic mess that was feeding time, and the wind was whipping. But he was a good sport for about 15 minutes, hahaha.

I am not sure how the rest turned out, but V sent me a few to "tide me over" (her actual words) but I love even the few she sent me < 3

I was hoping to get some good riding in this weekend, but OF COURSE the temp doesn't go up until Monday (back to 45*...wut) and we are sitting pretty at sub-20* all weekend. So we shall see.

I want to give a huge thank you to any of you who follow me and are friends with me on FB and shared my equine.come ad, or my FB post. His ad was viewed 600 times yesterday and I was swamped with messages yesterday evening. Thank you SO MUCH for advocating in my boy and making this process easier by being so supportive. I love you all!
Posted by Checkmark115 at 7:24 AM 13 comments:
Email ThisBlogThis!Share to TwitterShare to FacebookShare to Pinterest

I've quite literally drug my feet over listing B on the "official" sites for like, 2 months....whoops.

Mostly I have just advertised him on my personal FB, instagram and this blog. Not exactly the best way to get a horse sold that you desperately need to, but I was also dead inside from the decision and not being the best about it in general.

Now that I have a set date for moving houses and grad school loans looming and my car needs replaced and insurance premiums rose like 200% and medical bills to pay....I am freaking out and realized I needed to get over myself and list the damn horse *cries inwardly and outwardly*


It was every bit as awful as I imagined and I teared up picking the photos (there are too many good ones to choose by the way) but my loyal equine friends banded together and shared the shit out of my post on FB and ad from equine.com and its generated tons of interest already, which is super overwhelming TBH.

When I first casually listed him, I had him listed for much more than I am asking now and got a lot of responses just off instagram from followers who have known him for years, which would have been great if they weren't thinking I was listing him as a flip project for $1000.


I've already done the HARDEST part of retraining this beast, you will have it easy from here on out, TRUST ME. He is 8, not 3 and he's kind of BAMF, so BYE.

So that was annoying and put me off really pushing him for sale. Then, I got some super PA and bitchy DMs re my decision to sell and it was truly the cherry on the cake of my emotional stability over all of this. Fun times. Additionally, I was sick as a dog and he barely got worked. All I could think of was someone coming to try him and him not even being able to canter properly due to being out of shape, so I put it off for that reason too. ALL THE EXCUSES!

But I listed him. It is done.

I can already tell this is going to be exhausting, as I vaguely remember the physical pain I was in reading some responses and dealing with people the last time I sold a horse. LORT give me strength.

This is hard and I hate it.

Anyways, he's now officially officially for actual sale and I decided on a price and you should tell your friends.