Normally, I've taken to the interwebz for Rolex coverage. I still did a bit of that this year (*cough cough* minimized dressage screen while at work Th/Fri) but the real kicker for me was making the 1.5 hr trip to KY to watch XC live on Saturday!

Every year I've wanted to go, I've either been too young and the parental units didn't want to deal with it, or I've been taking college finals/Living in MO, where the drive is 9 hours instead of less than 2.  This year I said fuck it, I'm doing it. And I did.

Unfortunately, my phone is at the bottom of a pond and I literally lost EVERYTHING from Rolex on it, as well as everything from the past year and all my numbers. Devastation is a weak word to describe my sadness. I'm also stuck with a T9 phone and I think I might also toss that in some water soon.

Losing my phone did not take away from the total blast I had in KY though, thankfully. I still have the memories! Luckily also, like a total millennial, I uploaded a few photos to FB right after snapping the photo, and my friends have sent me a few, so I at least have a few pics.

We rose at 4AM, like total horse nerds,  because I was determined to get a spot right.up.front at the Head of The Lake fence, in addition to breakfast and coffee on the way down. Arrived with plenty of time at 7:30, and tucked into to our spots until kickoff at 9:30AM.

In case you weren't aware, the forecast was rain. Torrential, unrelenting rain. And we sat in it with the rest of them for 2 hours before XC even began. Glad we brought raingear.

However, watching Olympians walk the course beforehand, close enough I could touch them, was like a dream. I had seen some of them before at WEG,  but this time it seemed more real. WFP is literally the tallest person alive. Buck, Phillip and Ellen were all so close to me. I felt like a fangirl. The excitement kept me warm for a few hours, but once the rain began to blow sideways I began to rethink my sanity. Only Eventers.

The Head of the Lake was exciting as always, and the combination was tricky. I almost peed my pants watching the riders jump the skinny in the water on the buckle after the drop into the water. Those horses are masters at their job and GIT IT DONE. I was so impressed.

After a few riders, we moved on. I was reluctant at first because I wanted to stay hunkered down at THoTL, since it was an exciting combination, but apparently the way to do it at Rolex is to migrate.

I'm so glad we did! The fences out there on course were MASSIVE and tricky and I got to see almost every rider jump something different. Let me tell you, watching Olympians gallop past you on their beastly horses is a sight to behold. Watching Jimmie Schramm navigate the back to back opposite corners after the big tree was SO cool too. I've only ever seen her on Youtube, so to see her 10 feet away on Bellamy...my feels. Not to mention Jung, WFP, Phillip, Buck, etc. All like a dream.

The wetness was real while standing outside for 6 hours, and I was slightly nervous for the riders. I can't imagine the level of suck that had to have been for them. In all honesty, I would have scratched. But thats just me. I know those riders are pros and their horses are seasoned, but even then, it was sketchy. The footing was pretty dangerous. Numerous times I saw horses fall out from under themselves. The Hollow was especially tricky with the steep hills/banks. I gasped a few times. The amount of falls alone on XC was rather high, I thought. I couldn't believe how many were eliminated or pulled up after XC. I also did see in an article on COTH that a foreign horse ended up being put down due to injuries sustained on course. I was appalled the officials kept the OPT time at 11:06, but thats a discussion for another time.

We ended up seeing the majority of the course, but after 6 hours we tapped out and headed indoors to do some shopping. At this point too, our feet hurt, we were freezing and our shoulders ached from hauling our shit around. It was a real workout.

Levi actually was a total trooper and seemed to be enjoying himself and all the attention he gets whenever we go in public.

We also met a wolf. Like an actual timberwolf from Alaska. I also got his hunky owners' number, so theres that ;)

If I hadn't just seen Olympians and badasses tromp the XC course, this would've been the coolest moment of my life. Just look at his head. Its 3xs the size of Levi's. He comes up to my mid thigh. That thing was ridiculous...ly beautiful. And slightly scary.

Shopping was on another level. I think I could've walked around for 4 more hours just touching all the tack and things and stuff. DONT LET THE TACK WHORES LOOSE.

I had budgeted about $150 for the day on tack and stuff and things, which really wasn't much...but I was proud of myself. Did not go over and I scored some serious swag. 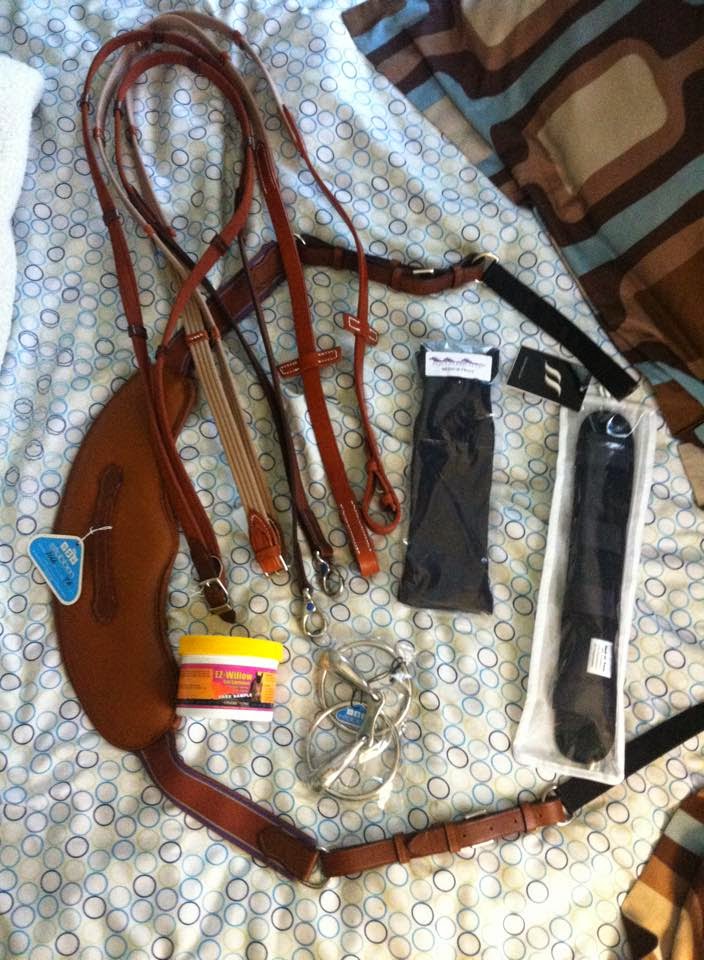 Stubben was having a stupid sale so I snagged 2 pairs of schooling reins, a loose ring bit and a jumper breastplate. Totally didnt need any of it, but you know how that goes. You can never have too many, reins, bits OR breastplates. Never. Especially Stubben. You'd be surprised how smashing chesnut looks on a chesnut. I would show you pics, but they're at the bottom of a pond. I also grabbed some free liniment, score. The odd shaped black sock looking t hings are Equisleeves, my total spur of the moment purchase. I've been curious about them for a while, tried to win them in a raffle a while ago, and after walking past the booth, the British guy totally sold me on them. For the price I paid, can't beat it. The other oblong black shaped thing is a Back on Track crownpeice. Also another spur of the moment purchase, with purpose. I've always wanted BOT swag, but could never stomach the price. $90 for one saddle pad? Please. I've only heard good things about it though and I say to the sale rep, "um what IS that thing". She responds, "Oh that goes on the bridle, helps to calm nervous horses" and I was like NEED IT. So I bought it for less than $30. What can it hurt right? (review later ;)). I also donated money to my favorite organization, New Vocations. Since I'm an ambassador I felt obligated, and with it received a wicked cool t-shirt hoodie, green and lime green. It beautiful. Total swag, total score.

I've also decided that I am buying a Voltaire. I spoke with the president (who is a seriously hot French guy), he sized a saddle to me and we discussed payment. I honestly knew I wanted one before I ever sat in it, and once my ass hit that perfectly tanned leather I knew it was destiny. I havn't owned a saddle in my entire life that fits, so I am more than ready. Cannot wait!!

In short, Rolex was more than amazing, and I have no words to describe it. Once Lauren gets all her photos uploaded I will share with ya'll how close we were to all the riders. Despite the rain & getting sick after wards ( I have a tremendous head cold) it was worth it and I really hope to go back next year & perhaps stay through Sunday. 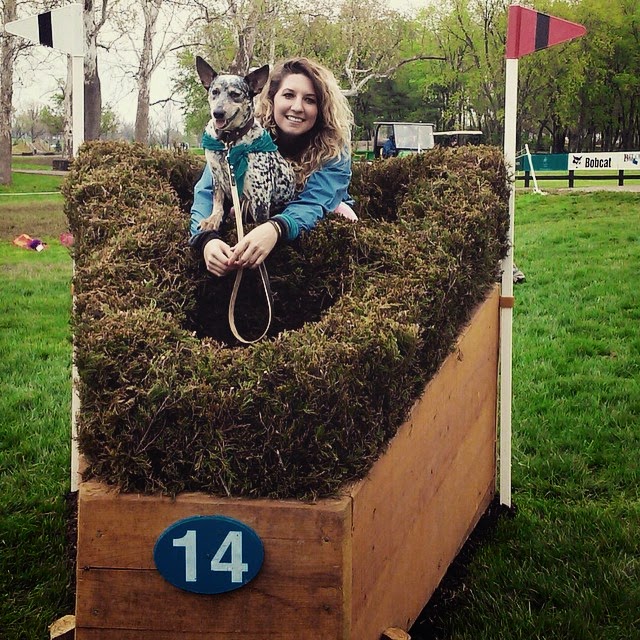 For those of you that went, was was your favorite part? For those at home, what was yours?


Posted by Checkmark115 at 8:01 AM 11 comments:
Email ThisBlogThis!Share to TwitterShare to FacebookShare to Pinterest
Newer Posts Older Posts Home
Subscribe to: Posts (Atom)