But my soul is crying deeply. And my bank account. There goes all my hard earned saved cash.

Cancer treatments (previously taken care of) and four hock injections later I can officially say I am part of the "forever broken horse club" and spent almost two grand in a month on my spoiled brat.

Yes. The pone failed his flexion tests with epic proportions. We trotted about 3 steps before the vet decided our fate.

While it goes against everything I can think of...I know it will make him feel better about performing his favorite duties. AND it could be so much worse. I don't even want to think about it. So I'm going to bury the pain of spending my very hard earned and fleeting money deep down and focus on the positive.

Like so so many of your supporting words stated, he is an athlete and every athlete needs support at some time in their careers. AS long as I'm not using it like duct tape to keep him going, I feel a bit better about the whole deal. It still makes me sad.

Upcoming post will be happier pictures from rides yesterday!
Posted by Checkmark115 at 12:36 PM 12 comments:
Email ThisBlogThis!Share to TwitterShare to FacebookShare to Pinterest

I'm not even sure how to begin this post.

It would not be  devastating news to most, in fact its routine for many owners.

I, however, SWORE, I would never ever do this to another horse after the Wonder Pony. Ever.

I VERY much do not believe in continuing to ride animals if they need injections of any kind to stay comfortable. I find it selfish of a rider to continue to ride a horse with degenerative joints that can only stay mildly comfortable with modern medicine. Its like covering up a problem with pain meds and making it worse with continuous stress. And after Spirit, I swore swore swore I would never never never do it again. Not for the cost, but because to me it hurts me to know I'm using injections to keep using a horse for my purposes.

Before you raise a fit though, this is MY opinion. And I DO NOT judge others for doing so. Its your horse, your life, your decisions.

I am also going against everything I've stood for for years and possibly injecting Yankee. And it hurts me. Let me explain before ya'll go calling me a filthy hypocrite.

For those of you who don't know who Spirit is, he was my beautiful little spunk event pony. He could and would jump anything I pointed (or not pointed) him at. I got him when him and I were both 12 and he had only been one mess of a trail horse. Years later we would do many magical eventing things like ride with Darren Chiacchia and win Pony Club Mega Rally.


However, when he was 14, he got very sore. Very sore. And we started injecting him so I could continue to event. Because I did what my vet told me to.

We continued to beat as at jumper shows and do mildly well at events (dressage was not our thing) and he continued to love it. Never met a horse who loved jumping more. I justified the injections with his love for competing. But part of me felt very selfish for not retiring him.

And then he got worse. And we started injecting him every 6 months. Put him on the best joint supplement. When I sold him he was 18 and I know he was so bad that he had weekly chiro and massage treatments and god knows how often he was injected.  He evented with young girls until his death at 22, but my guilt for feeling like I had shot my beloved pony's joints, haunts me to this day.

Which brings me to now. With da Yankee.

I noticed problems when I brought him back from his 2 months hiatus. He was ouchy for the farrier. He tripped a lot. He was posty leg at the canter. I attributed it to being out of shape/lack of muscle.

Until 4 random people noticed something was just slightly off about his RH. I died a little inside.

NO NO NO he is 11 years old. Not a thousand. I haven't even eveneted him hard because I'm broke. I could understand slight offness if he was a brilliant 2* horse but he's a mediocre Prelim level horse who's actually never competed Prelim.

However. I bit the fucking bullet. Went against everything I swore I would never do and called the vet for flexion tests. He comes tomorrow. I also switched around Yankee's smartpaks to a better grade joint supp.

So I guess I will find out then. I knwo its not the end of the world, but to me it just feels WRONG. ALL WRONG. He's 11 so I SHOULD inject because he has sooo many years left and he's not even lame. WRONG because I feel its wrong to cover up soreness for my own benefit. WRONG because if I don't do it I will be shamed by every single person I know (if he is off).

I'm very torn. I would feel different if I just retired him and injected him to make him comfy out in the pasture. But this is MY BABY. The horse I trained MYSELF to jump four foot and do second level movements with. Spent 8 years finessing. I cannot just throw that away for something little thing I find ridiculous if its treatable.

Feel free to explain to me why injections are such a magical thing. I know they are. But I'm not going to listen. I just find them wrong. Which is why I hate this. Because I will do it if I have to.

Selfishly :/
Posted by Checkmark115 at 10:30 AM 19 comments:
Email ThisBlogThis!Share to TwitterShare to FacebookShare to Pinterest

Yankee had a hard weekend. Week really. I think this is the first week in the 8 odd years I've owned him where he's been worked every single day. Poor guy is beat. He's not the type of horse who has/needs to be in work everyday and I usually giv ehim two days off (after hard works usually) and our system has worked out well.

We hacked, jumped, lunged and dressaged once, and then the girl who was riding him in the clinic rode him Fri-Sun.

I was nervous he'd be an asshole for the girl (lets call her C) who leased him for the dressage clinic since he'd had no days off and he is a puss about hot weather. But, he was very good :)

C is a fabulous rider who mostly does hunter/jumpers. She wanted to do the clinic to learn how dressage works because she is going to start doing larger jumpers and her father thought it was a good idea to learn.  I agreed because all jumping is is dressage with hurdles. It was her first time riding in a dressage saddle and learning the basics of the sport (inside leg to outside leg/aids). Unfortunately her horse was lame, but it worked out nicely for Yankee!

I was so so so so so nervous watching my child go around with someone else. We are connected telepathically, I swear, and he is very much a classically trained dressage horse and goes on outside aids for the most part. Hauling on the inside rein does nothing but flex him and communicating that to new riders gives me anxiety.

C did a GREAT job with the pone, picking up the outside aids quickly and even when Yanks got nervous about leg yields right in canter and got a bit weird, she kept her cool and remained soft. Loved watching her ride. Very gorgeous and proper.

They mostly worked on leg yeilds the first and getting Yankee round, with outside aids since she was new to dressage. I think Yankee was a little confused at first but he finally settled and worked through it like a good pone. 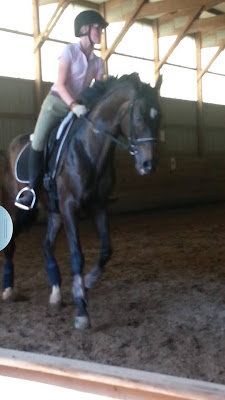 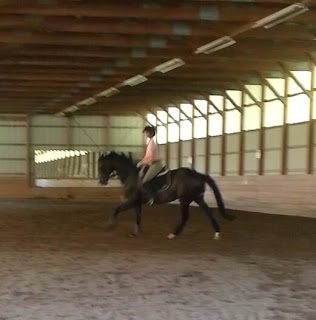 I loved how the clinician thought he was a WB because he was "so fancy". Laughed a little and told her nope, hes an OTTB. I was proud during that moment since I've done all his training myself. Gotta love that. Got a little chastising because he's 11 and still doesn't have changes, but hey, thats another story.


The second day they worked even more on roundness and throughness form behind, connecting the back to front with the same aids. I'm very glad the clinician drilled this because this is how he is trained, and SO MANY PEOPLE think dressage is all hand. It is NOT. It is not a headset, but an acceptance of the bit, from back to front. Sure, you can get away with a cute headset sometimes, but if you get a REAL judge, they will nail you for it. (One of my biggest pet peeves, seeing riders ride from the inside hand only to get the "head down").

I wish I could've watched, but I worked a double. Her mom sent a few pics and said she had more fun the second day than the first, YAY! 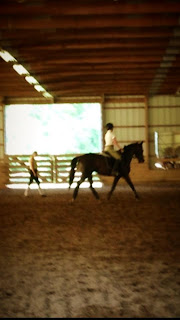 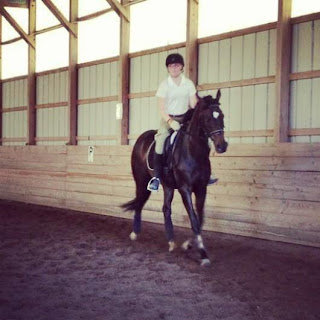 She said he was very good, did his carrot stretchies. gave him his beloved bath and put him in front of the fans. Very glad he got that experience!