We left off at prepping for SMSG in July and it was worth it! We had a blast, Yankee was a super star and I ended up 2nd overall and my team was second overall as well... 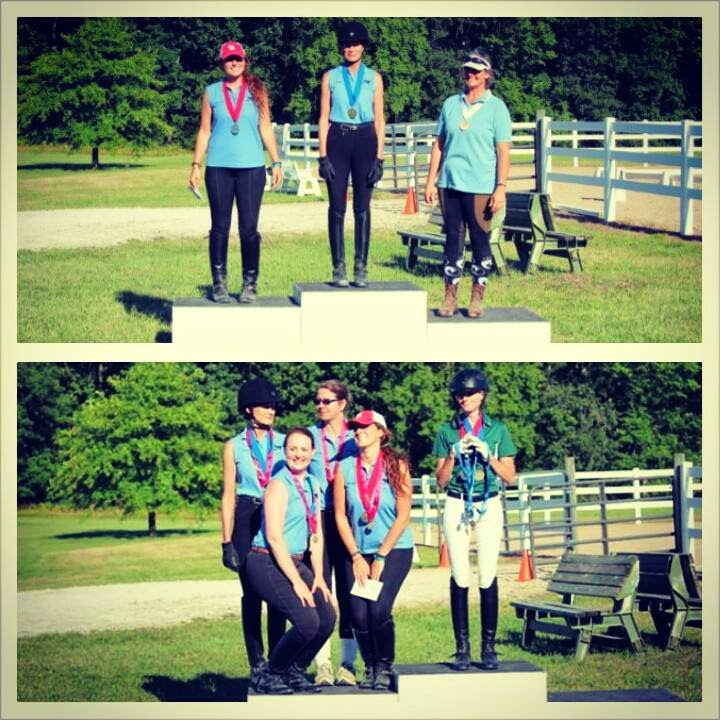 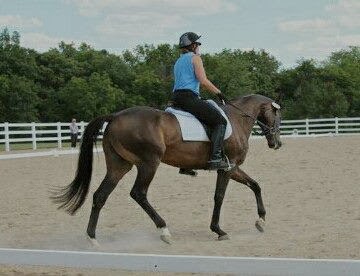 In August we took this adorable picture... 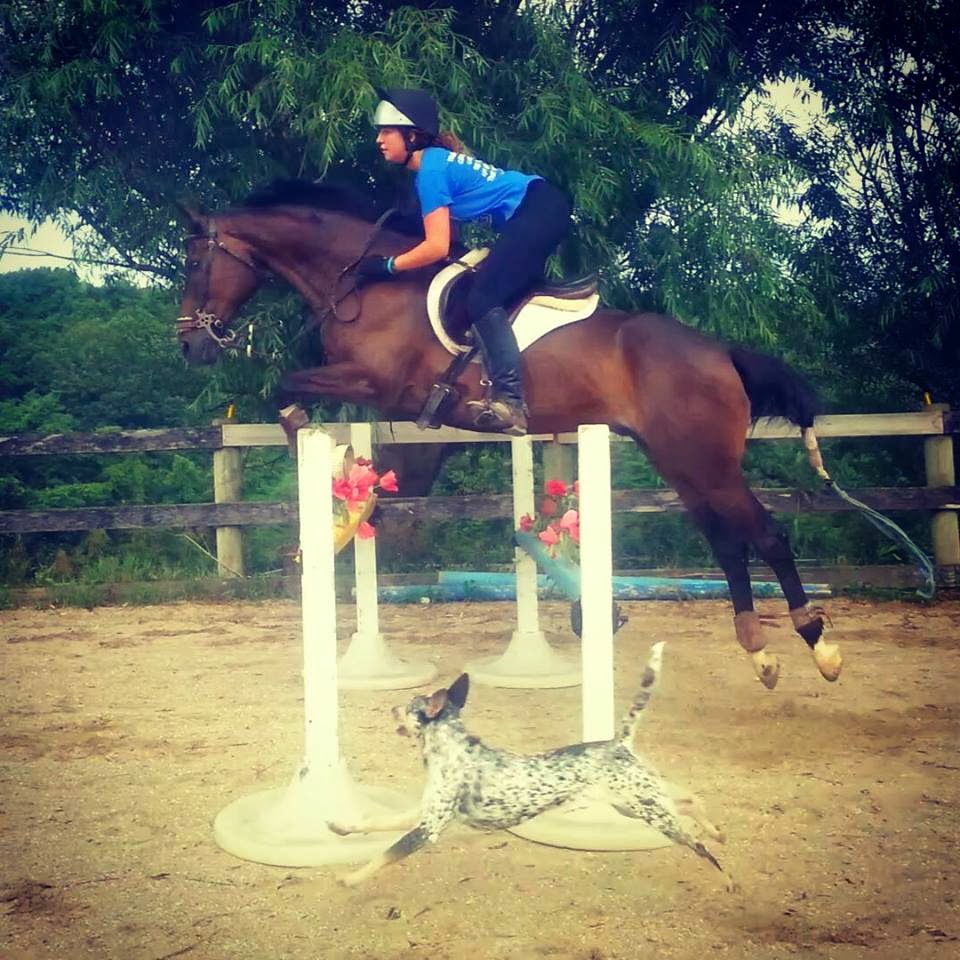 ...beasted over this triple bar... 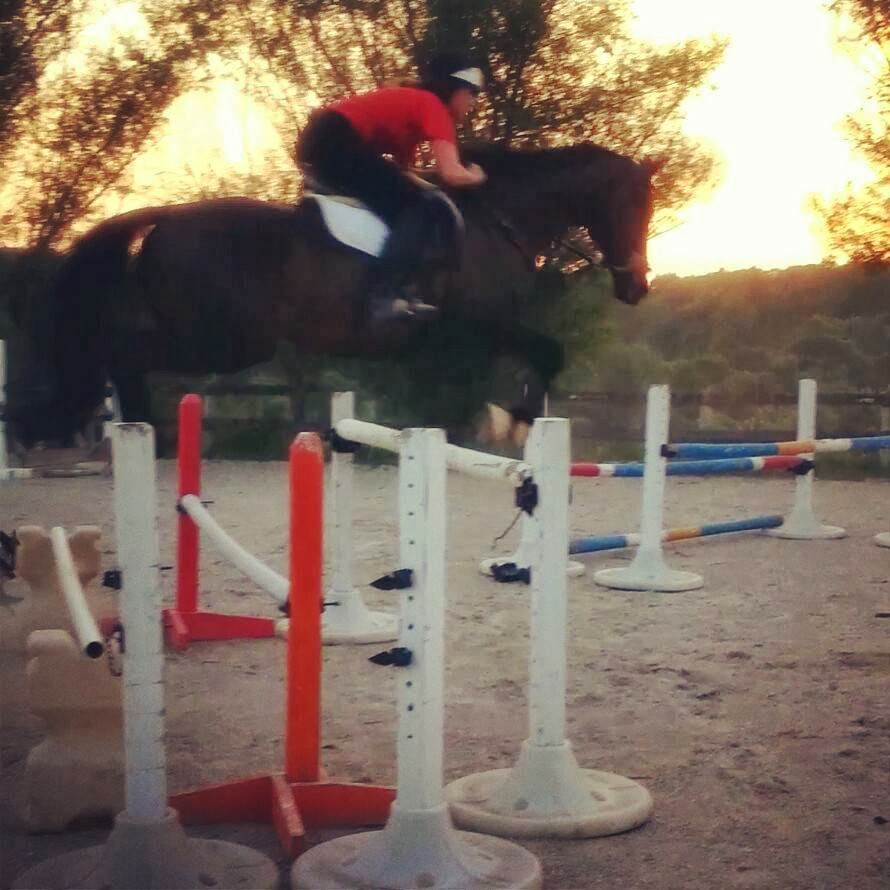 ...he traded in his jumping shoes for a lesson pony for my eager friends... 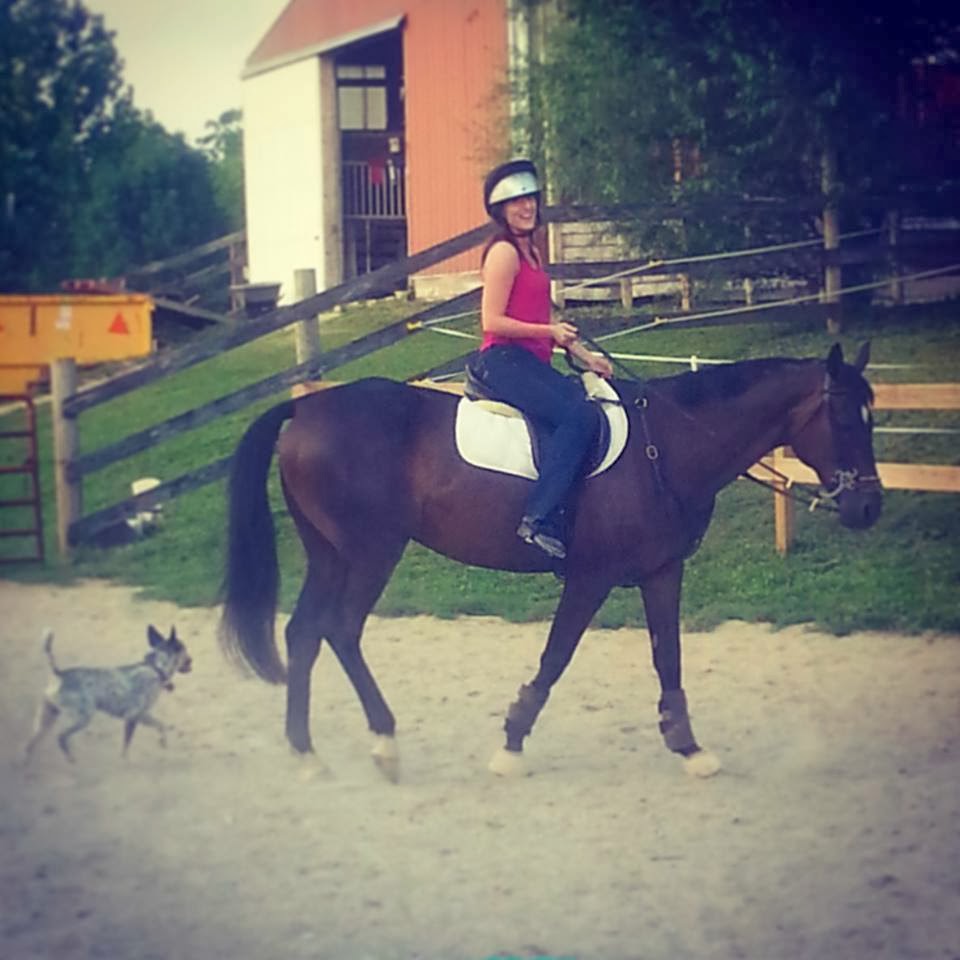 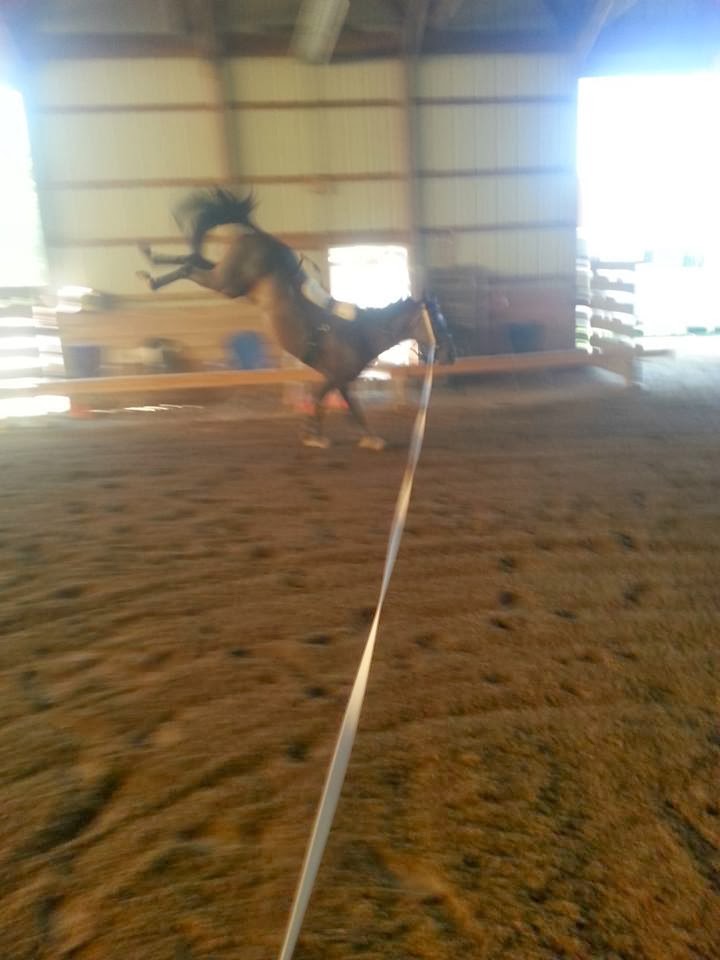 ..had some herp derp moments... 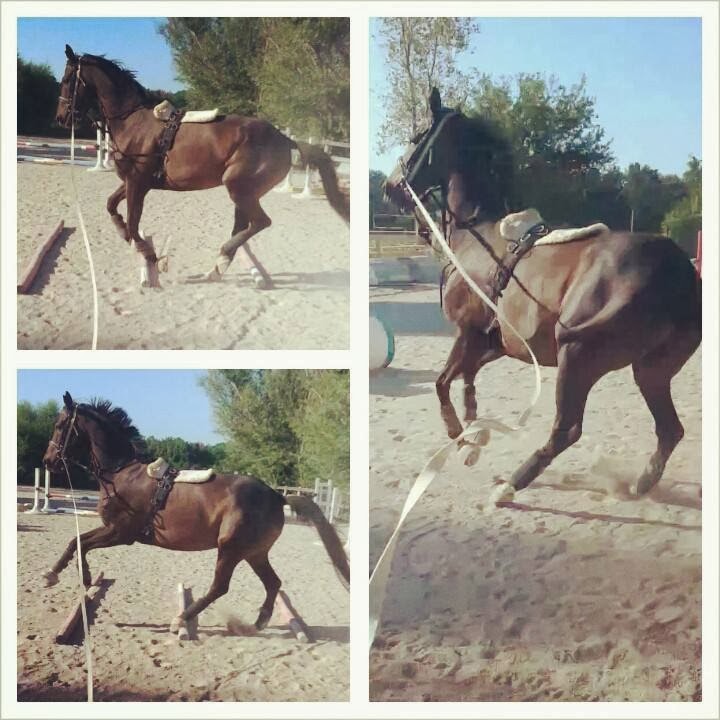 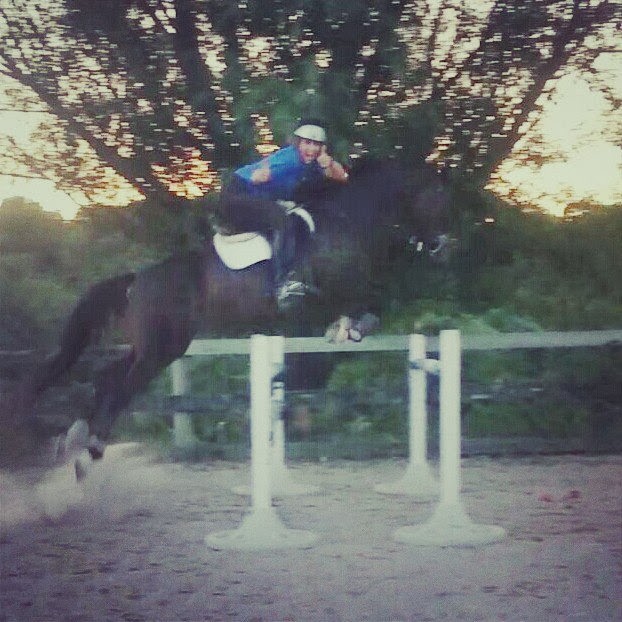 In September we were headed towards Chesterfield in hopes of winning the coveted first place neck ribbon in the Classic so we practiced really hard....

...And ended up not winning first, but still cleaned up with a SOLID badass effort from my boy on a hot day. I also got free bloody mary's so that was a win!


...somewhere in between August and Sept Yankee had surgery on his tailbone to remove a cancerous tumor. I almost fainted when I heard the sound of the bottom 2 inches of my baby's tailbone being crunched off and removed. I also deeply  mourned the loss of a solid amount of his hair.  While he was off...


...and then we came back strong and  jumped four feet... 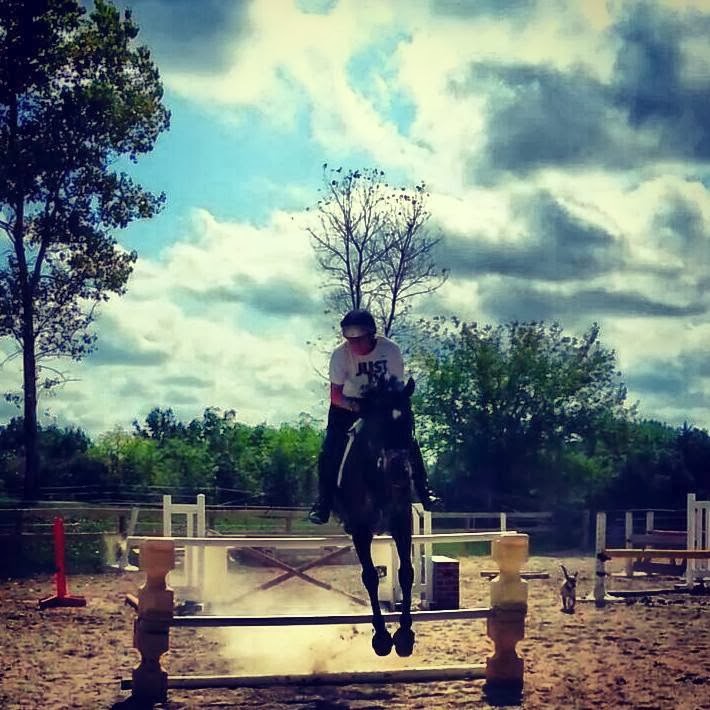 October finally got chilly so I put my boots and jacket on for the first time, drank lots of pumpkin spice coffee and went on our first trail ride of fall... 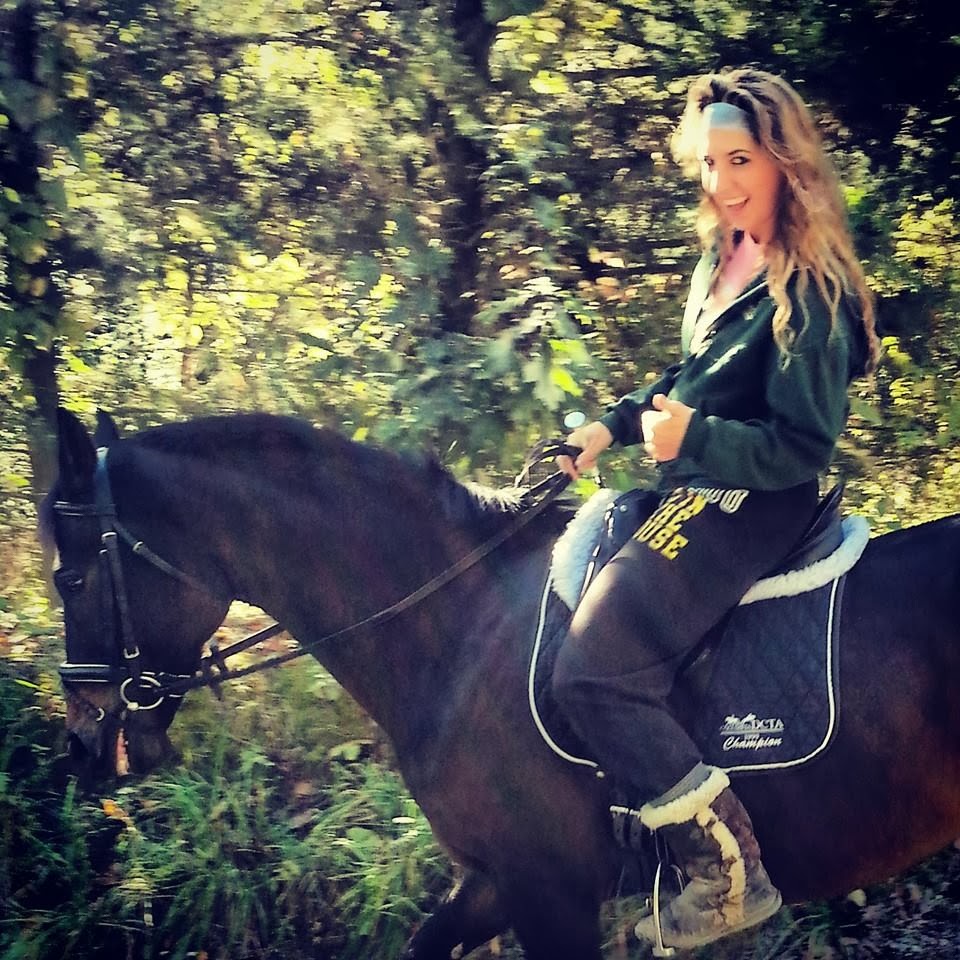 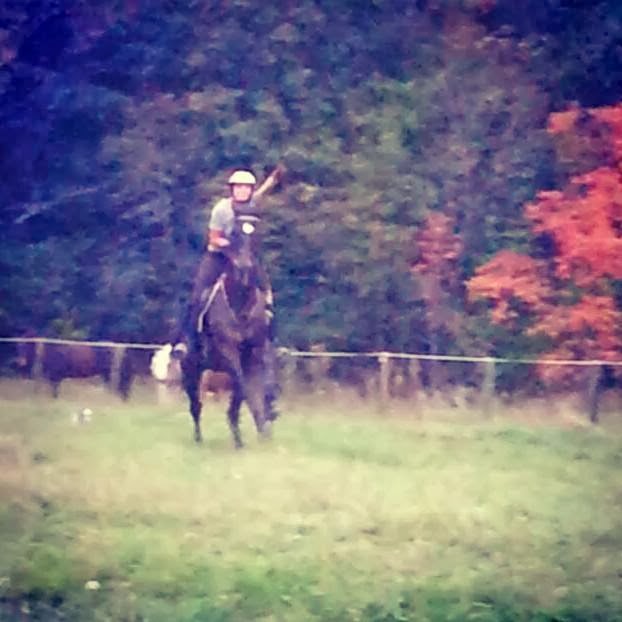 
Got REALLY good at bowing.. 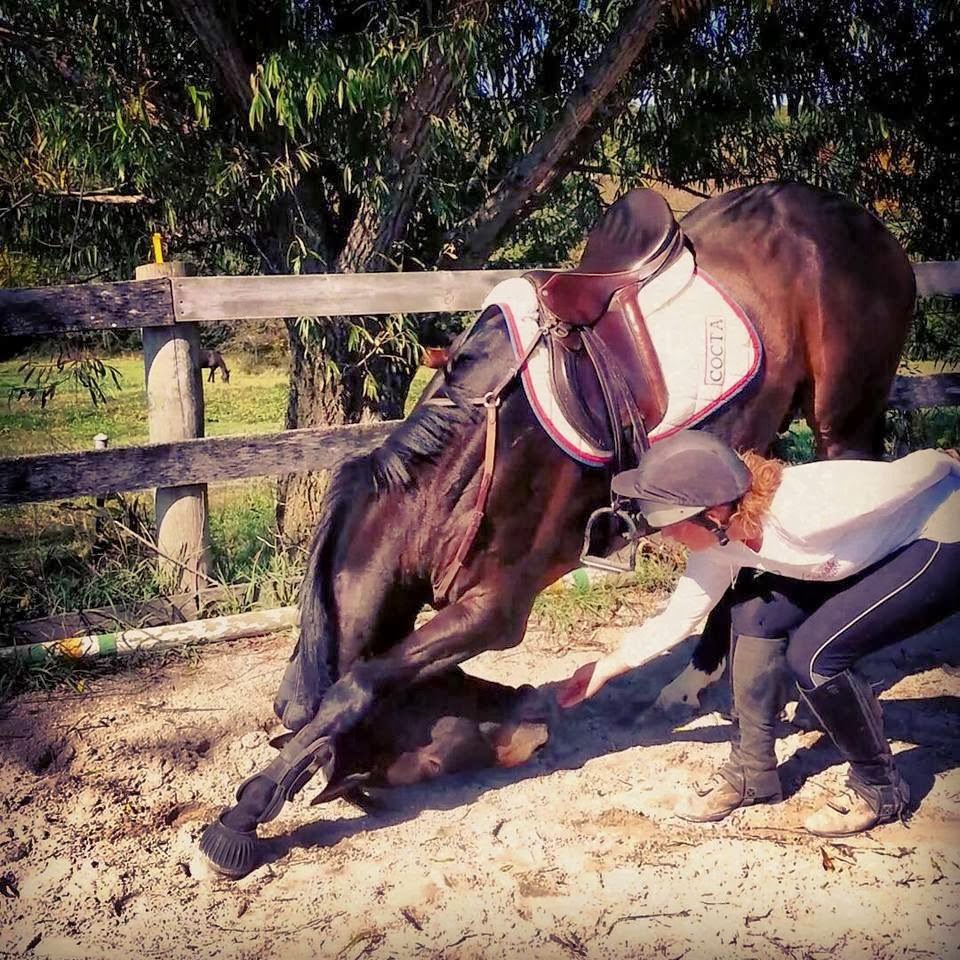 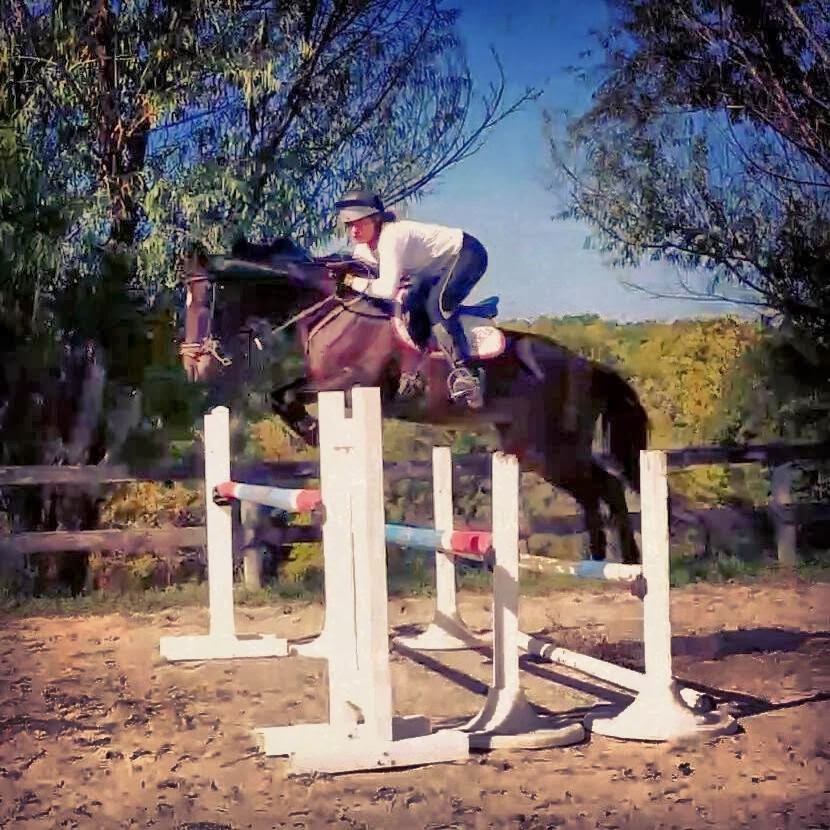 ...rode a shitty little pony and loved it...

...and made winter my"get really good at dressage" season in prep for moving to FL...

Posted by Checkmark115 at 6:18 PM 5 comments:
Email ThisBlogThis!Share to TwitterShare to FacebookShare to Pinterest

I usually don't do one of these since my years have been less than eventful lately, but I did a SWELL job of documenting pretty much everything I DID end up doing and waded through 678 pictures that were labeled on FB as "Riding 2013".

February was mild so we jumped a lot.. 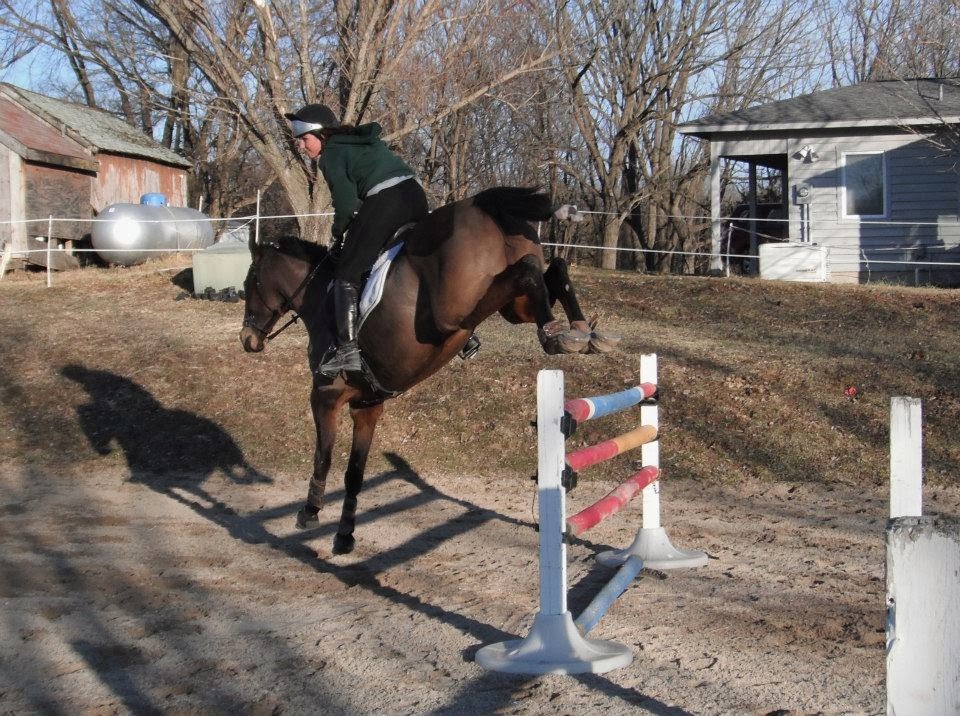 March was a month of dressage...


April was a big month. In spite of a thrush outbreak, we were busy prepping for the first event of the year and did a bunch of jumping... 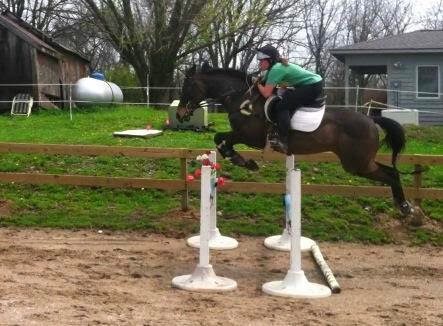 ...and went XC schooling for the first time in over a year. We tackled Prelim fences in attempt to be more than ready for Training. We had some rough patches but overall, great school and I was feeling alright about showing again... 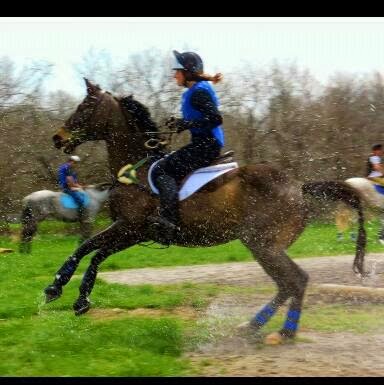 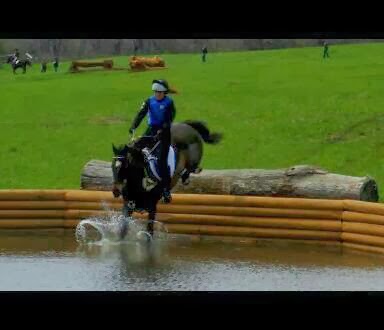 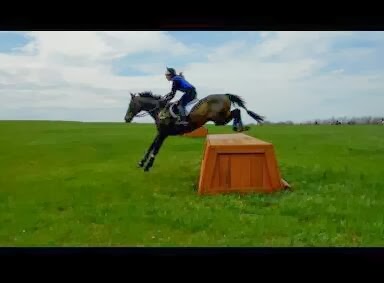 May was not a good month. My truck broke down 2 days before my event and no one had room to take us so we had to scratch. I felt defeated...again. Little did I know that would begin the "Summer of Expensive Shitstorms".

We also said goodbye to one of my very best friends, H and her horse Pronto, the big black perch cross. We went on a trail ride a week before she left for grad school in TX and it was beautiful! 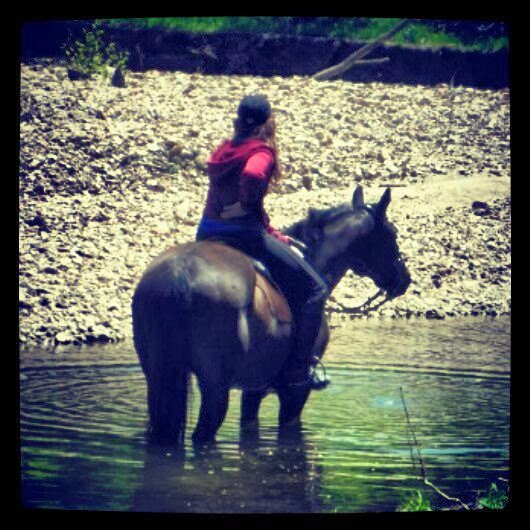 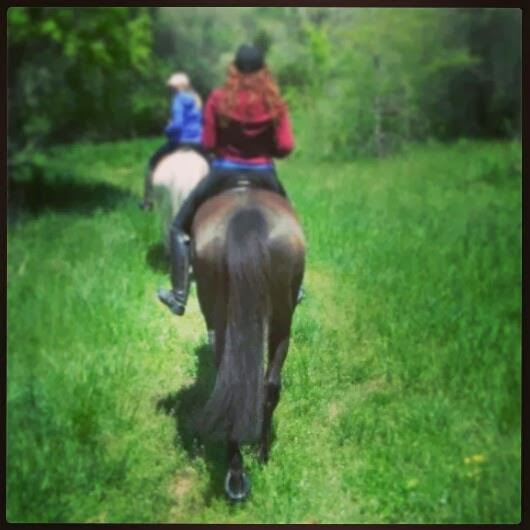 I went home in June to Ohio and while I was there, visited my QH babygirl, Dutchess. I sold her before I moved to Missouri in 2009 to my best friends mom. She was lovely as always... 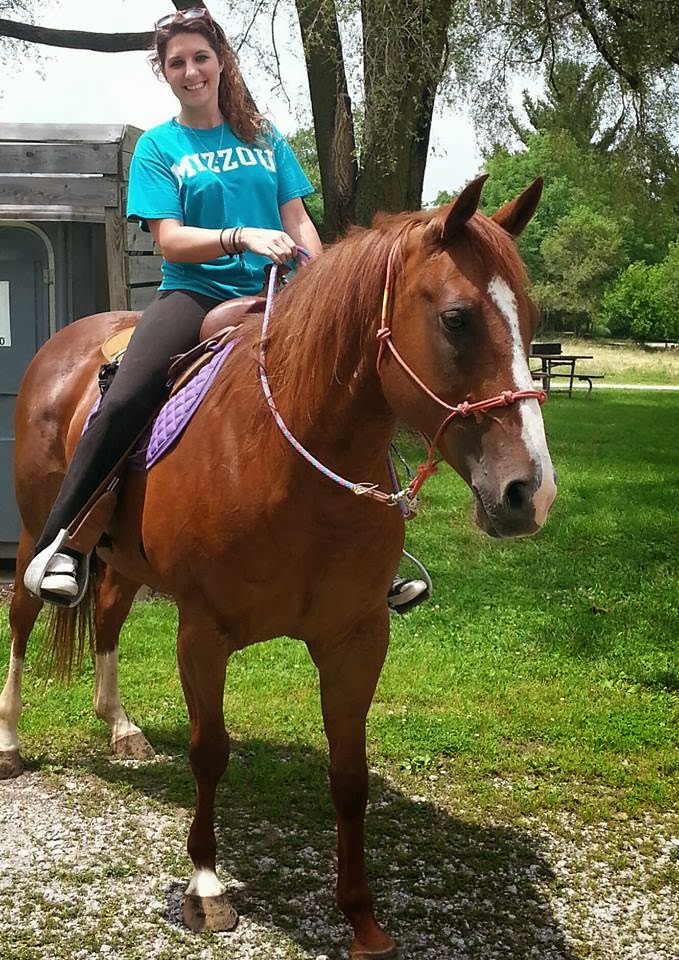 July was a BUSY month and  miserable one. It was SO damn hot!  July 2nd Yankee made a new friend...

I tried to get back into riding more and prepping for a show in Chesterfield that I wanted to go to... 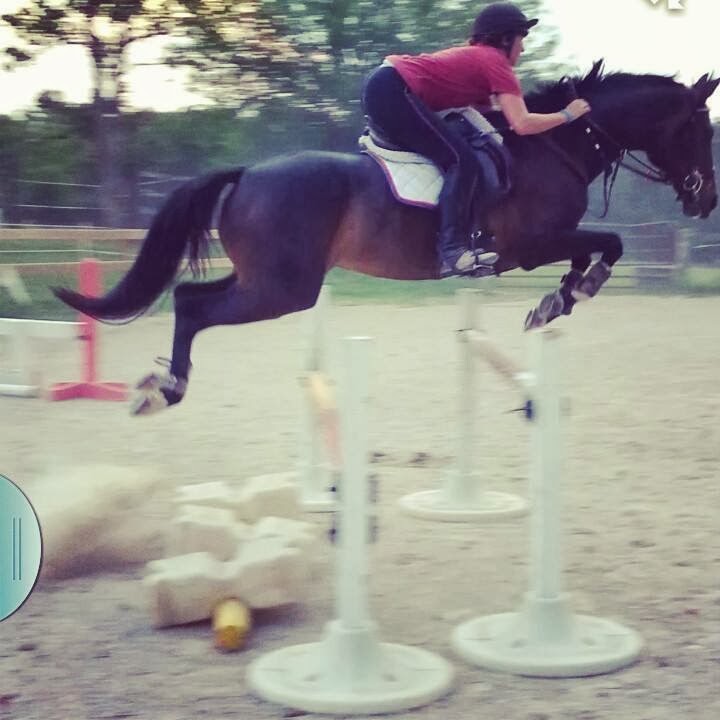 Yankee was ridden by a local girl in a 3 day dressage clinic... 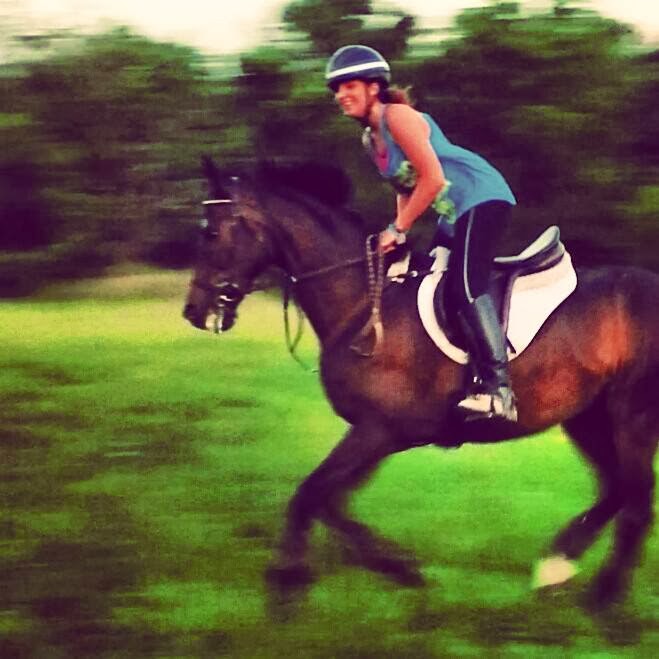 I took Isis swimming and almost died from having too much fun! 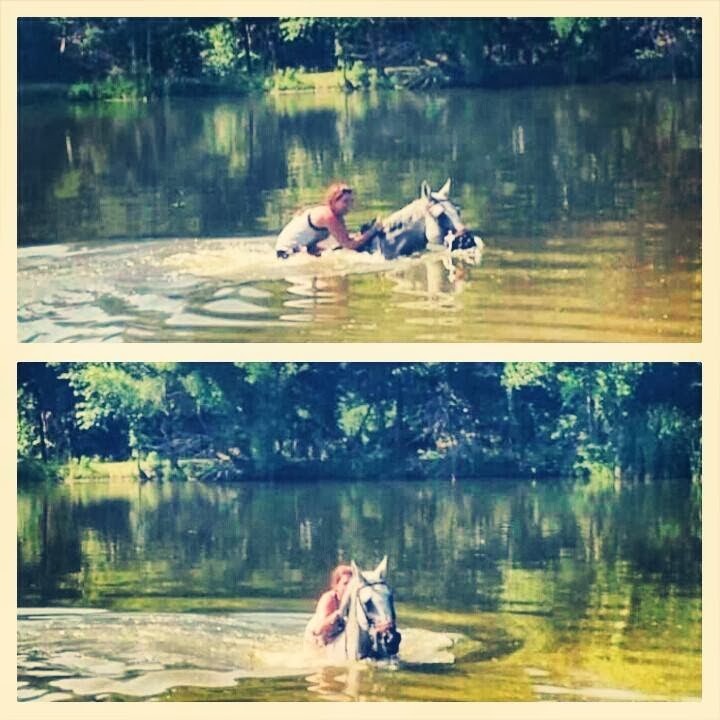 We went through a pretty rough patch in jumping and several bad rides...

Practiced for SMSG and put in some work in the ring... 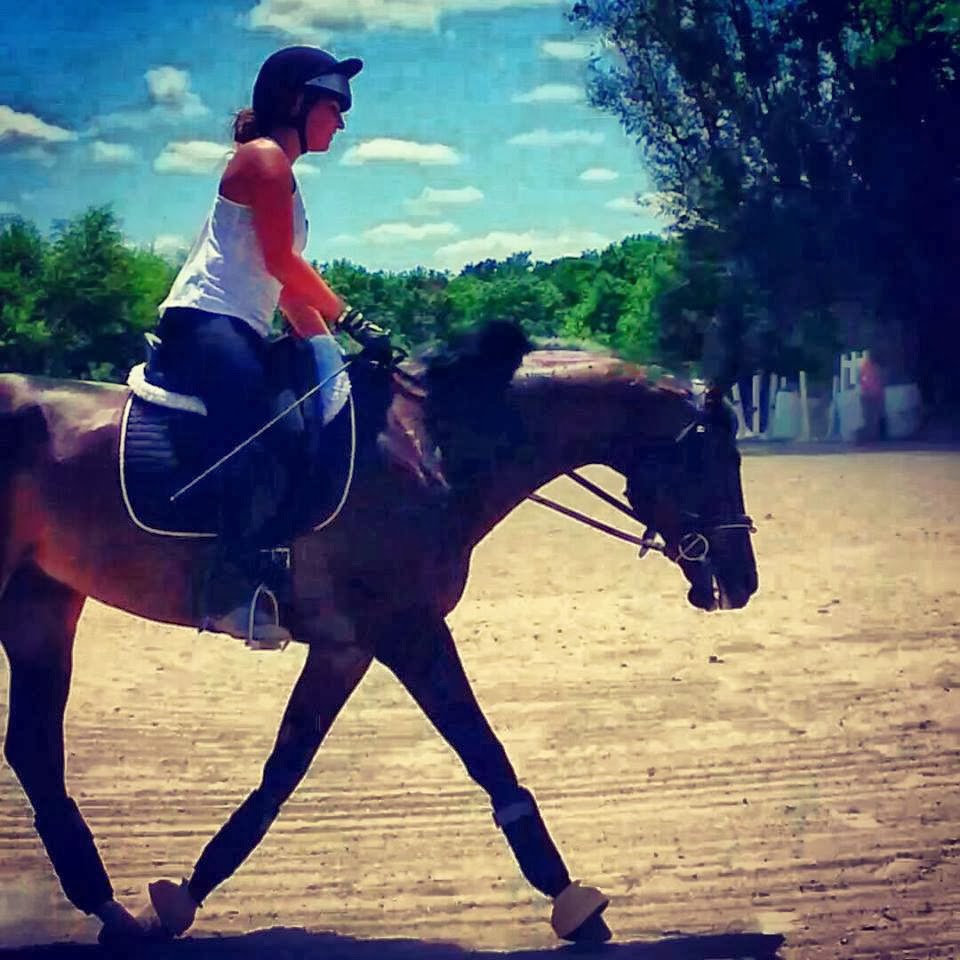 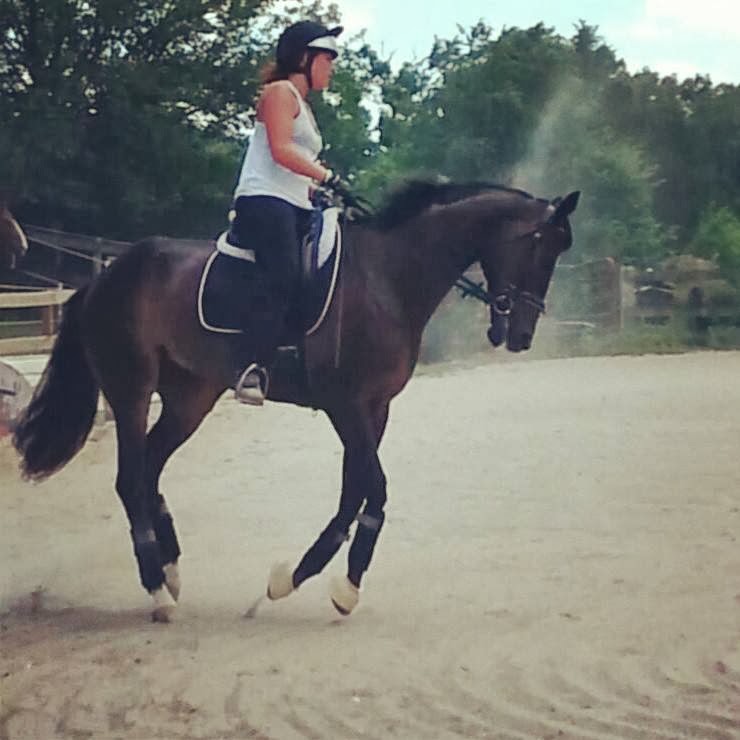 ...to be continued from SMSG
Posted by Checkmark115 at 2:57 PM 3 comments:
Email ThisBlogThis!Share to TwitterShare to FacebookShare to Pinterest

Most of this post is just me kind of ranting about things you've all heard before so continue at your own risk.


Apologies for the lack of presence on le blogger, I've been dealing with a SHITSTORM (like nothing I've ever experienced in my 23 years) in my personal life and dealing with with that as best as I can ...which turns out is not well. Typical me.

I haven't even gotten on here to read anyones blogs either, for lack of time and spiraling in to some sort of almost depression. Don't worry though, over it, new life plan. I have dearly missed my blogging friends though and intend to make a comeback to riding and blogging once life and the weather simmers the fuck down.

We left off with Yanks being a grumpy butt and plans to start showing in Florida next month once I move. And we pick up today having ridden maybe 3 times, dealing with working 70 hour weeks, being dead tired, battling the batshit INSANE weather we've been having and currently NOT moving to Florida.

I kept this from everyone for about a month and  half because not only do I feel like my life was upturned (yet again, worst luck ever), I was almost embarrassed because I made a huge deal out of it, got an apartment AND a barn, poo poo-ed the naysayers and was basically like fuck ya'll.

So now I hang my head in sadness and shame and wish my life would just work out the way I want it to FOR FUCKS SAKE. Done a bit of soul searching, hoping I found the right answers, but I really don't want to talk about it further. 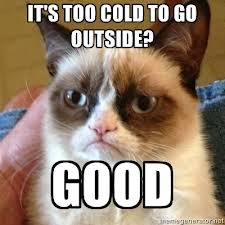 Since last post I got a wicked cold and was down for the count for about 2 weeks, luckily  some of that was when I went home for Christmas and Yanks got worked 3 times while I was gone.

Since THEN though I just haven't felt like battling the snow. ice and bitter cold to ride when there's  no point so I think I rode once and lunged once.

He's turned into quite the sourpuss as well and I don't want to deal. Thats terrible of me I know but I just can't right now.  I know he misses work and HATES being shut inside but I don't make the rules about turnout. I make sure the baby gets ample love and grooming but thats about it. I am frustrated that we were finally getting somewhere and had to shut it down for a month, even though we have an indoor! Some kind of cruel fuckery.

I also realized that as of Jan 1st, Yankee is now TWELVE and has YET to go fucking prelim. Everyone's lecturing me, saying be grateful he's alive etc etc. I KNOW PEOPLE CALM DOWN I'm just frustrated that my boss ass beast can jump intermediate and do some solid dressage now and we can't even afford to get our qualifying scores to GET to Prelim.

YET AGAIN FOR THE FIFTH YEAR RUNNING. God dammit I'm so over it.

It is really hard to be happy when all I've ever wanted with this horse was to go 2* and everyone around me is competing and getting new horses and I'm over here like 'oh hey at least his board is paid, he has shoes and food but uuuhhh past that, SOL'.

I was going to be SET in FL, but thats no longer an option.

As for the weather, not sure how ya'll are faring but our barn is a DISASTER. We are not used to temps below 0* and the windchill has held steady at -30* for going on the 3rd day. All of the horses had been in for 4 days and only some got turnout today at the cost of us begging the BO to let us for fear of getting trampled while barely getting stalls clean.

I seriously don't know WHY people would choose to live in a place that normally is this cold because I feel like I'm dying, haha.

Our barns manure container is full and we have nowhere to even dump what we barely take out of the stalls. They're all frozen! How do people in Canada do this??