I have two posts to write in addition to this one, but whenever I get pictures, I can't not post them right away. I'm a picture whore, along with pillow and tack.

I am unable to ride till next week, for disclosed personal reasons, but I needed Yankee worked for the girl who is (supposedly) coming to try him out on Saturday.

OH HERRO Jackie. The badass of all badasses that saves mine on a weekly basis. I believe she rode him 4 times this week? Either way, got his fat (WHAT?! never thought I'd ever say that) Thoroughbred ass back into shape worked a little. Poor chap was slightly confused that his 5 week, daily-lazy-routine got disrupted by tiny blonde person, but he got over it...


I only watched for two days because on top of the non-riding reason, I also have a wicked summer cold. FML right? Yesterday she did a little dressage, but we wanted to keep it short since it was still 102 at 8PM.

Let me reiterate how much I hate the Midwest, here. IT F**KING BLOWS AND SUMMER CAN DIE.

I'm about to lose it with the picture situation so they will be out of order. Some even deleted themselves like little bitches, so who knows where the flip they went. Lots more on my facebook.

Yankee was pretty perfect. I was relieved because he was seriously awful for me last Friday. He maliciously tried to buck me off and almost succeeded because I was caught very unaware. Dirty tricks...very dirty.


Even his free walk was fantastic. I'm pretty sure we kept it under 20 minutes, but he deserved the short work. Not only was it hotter than shit outside, but he was perfect. Absolutely. PRAISE JACKIE for her magic riding skillz. 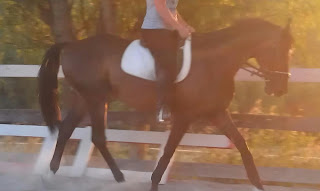 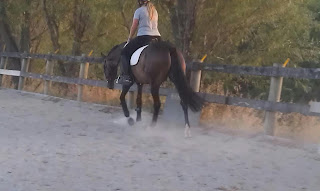 Today I dragged myself out of bed, coughing up a storm and was pleasantly surprised by the "nice" weather outside. It was only like 85 degrees and had just rained sprinkled! LAWDY. I thought I died and went to heaven.

Yankee was a grumpy bitch since it was only 11:30 and had recently risen from his first beauty sleep of the day. I told him to get over it. He told me to shove it.

What he didn't know was that Jackie and I had set up a fun little course to stretch his leggies over after a solid 5 week hiatus (minus the 3 times e's been schooled over baby fences in the past week and a half).

We were both happy to see that he settled nicely into the bridle (even without a bit...swoon) and worked forward from the get-go, despite his lack of energy earlier.

He was basically a boss. No surprise there.

That is all for now. I prefer to let the pictures speak for themselves, since I hate reading long paragraphs myself.