7 Minutes In Heaven (I Did Another Thing) 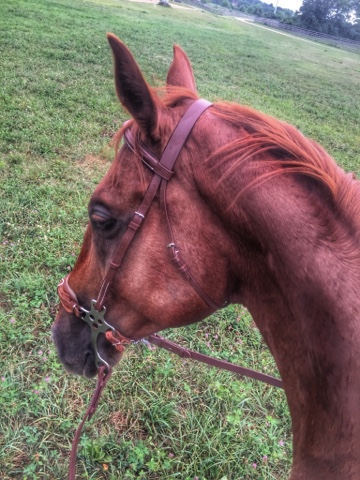 Even though I'm not supposed to yet. But like

It's fine. I literally only rode for 7 minutes. I timed it.

It was amazing. You never know how much you miss something that's such an integral part of your life until you're forced to stop doing that thing.

Seriously, if you're able bodied, go jump on your horse tonight and fucking savor that shit.

I would like to say I immediately regretted it, as the percussion of walk footfalls reverberated up my injured spinal column and sat nestled in my bones and muscle like some evil spirit, but I didn't. 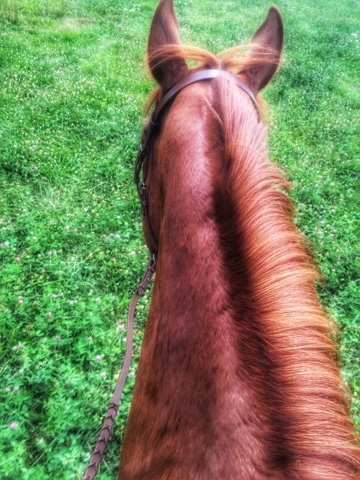 Hopefully here in the near future we can make out comeback together!

Posted by Checkmark115 at 7:28 AM 11 comments:
Email ThisBlogThis!Share to TwitterShare to FacebookShare to Pinterest

What Do Wednesday; Whiskers

*I say new, but I paid for it almost 6 weeks ago on ETT and it just arrived today. The cons of ordering  off ETT. But I was excited nonetheless. I got it for his hackamore, since the one was I was using in the interm was shitty and slightly too big and therefore the noseband was sitting about an inch too low on his nose. Like I said, I bought the damn thing ages ago, but it JUST arrived. Finally. Its gorgeous. Moving on. 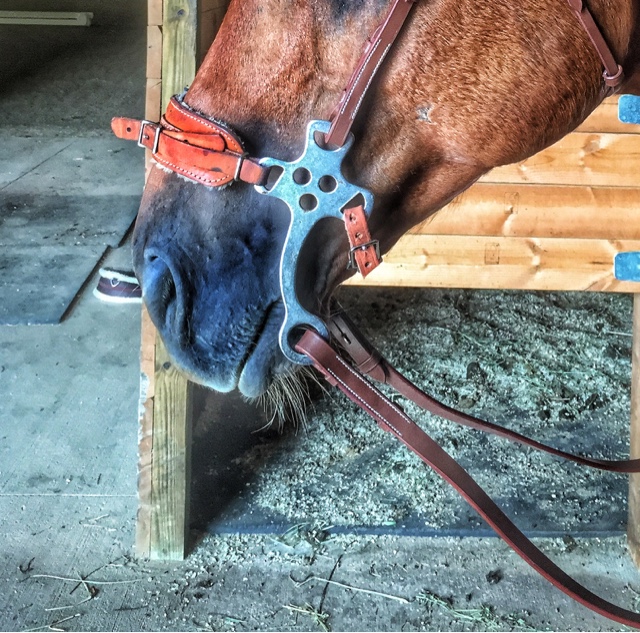 I noticed his super long whiskers for the first time in any pic (so then I had to dig for more) and it struck me how long its been since I actively shaved any whiskers on either of my horses.

Back in the day, I used to show hunters and as many might know, no.hair.allowed.anywhere. Not even in the ears, so god bless if your horse didn't stand to be shaved there. So naturally, I followed along because thats what everyone else was doing and shaved all my horses basically bald everywhere always.


Then I started eventing and people banged their tails and pulled manes and tails so of course I did too. I might have done this for about 10 years until I moved to MO and honestly got incredibly lazy and stopped doing everything but face shaving for shows. I personally dislike the event tail look and it was the greatest decision ever to let Yanks tail grow out...so much  more tail hair!! #Luxurious

Then I noticed  that not many people were really shaving faces at events and jumper shows anymore, and since I really didn't enjoy taking their faces off... I stopped without really realizing it. On occasion I would notice and think it looked pretty unkempt, so I would buzz it off.

Looking back, I really don't understand why, having 'made the transition'.

It wasn't until I bought Bacardi, aka self destructor, that I intentionally left all forms of hair on the face.

It took me all of 5 minutes to be OK with this since shaving all forms of hair on my own body is annoying and doing it on a 1000b beast who didn't want anything to do with it was even worse.

Also, why was it ever a fad to remove something that legit has a purpose for the ponies.

Not that it makes a difference with Bacardi since he LITERALLY (no but really, literally) has a new cut on his face everyday, but I see what the naturalists are harping about. The hairs are there for a reason. How do we humans know if they are more deeply wired into vision or other sensory functions? Agreed, it look much better clipped for show, but really why?

As people like to say, "you wouldn't do that to a cat!"

So what I want to know is simply what you do with whiskers! Keep or clip! Feel free to elaborate. tell me dear readers, what do!?

Posted by Checkmark115 at 8:02 AM 20 comments:
Email ThisBlogThis!Share to TwitterShare to FacebookShare to Pinterest

I wish I had thought to snap pics of Bacardi feet when he was constantly ripping shoes off but I think I was so aggravated and bewildered the day of, I would always forget and then never think of it again.

Luckily, I remembered on the 22, just a day or so after "the incident" and I've been staring at them ever since.

Horse feet still remain the one thing I have never really "studied" and still don't know much about. I know there's a frog, heel, white line, hoof wall and other shit all up in there, but my horses have mostly always been shod and not barefoot so....just ignorant on the subject.

You know, the Pony Club, horse crazy, knowledge hungry girl who buys every horse book and digests it and then spits it out? Yea, never really learned about feet in those books. That was the farrier's job.

So admittedly, I'm kind of going in this blind and its bit scary. Luckily, there's a lot of bloggettes out there and a few long time acquaintences  willing to lend a virtual hand on the subject. I also have spent a lot of free time googling (sidenote here is a super cool article about a GP dressage rider who keeps all her ponies bare) and reading up on the 'barefoot journey' and feel like I have a solid arsenal.

I know it will require time, patience and some planning, but for the most part I think I am OK equipped for this. Maybe.

That being said, here is the quasi starting point, since this is like week 7 of B shredding his feet... 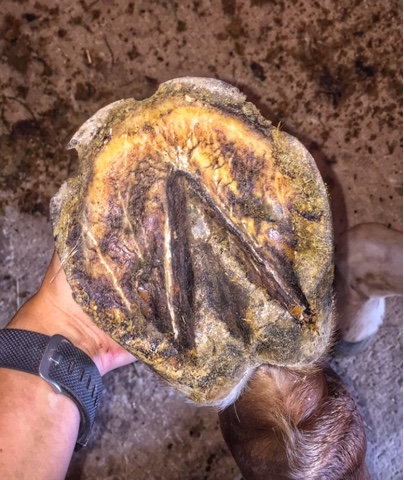 First up we have the better foot, the right fore. You'll notice it looks like shit and thats because there was actually some hoof wall to shred on this one. Otherwise, besides being kind of gooky &  weirdly black from the Magic Cushion, not a horrible hoof. Kind of wide and cuppy with a symmetric frog and good heel. Not sure how thick those soles are, but overall not terrible.

The shoe that was on this last was nailed on, and did not have the nasty habit of coming off. Times ripped off in 7 weeks; 2 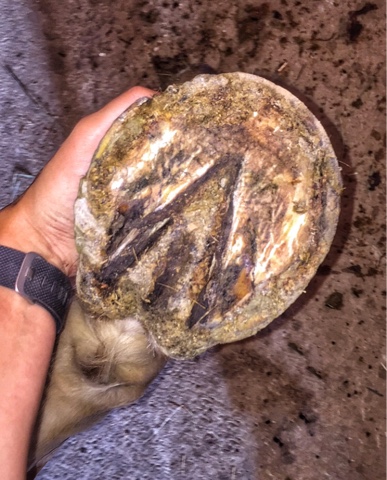 Next up is the shittiest foot of all four; the left front. At first glance it looks alright....until you realize there is literally no hoof wall left and he's almost walking on the human equivalence of his nail meat (no sure what the real term is, but you know, when you rip off a nail..the skin under is just....nail meat).

You'll notice its a bit clubbier than the RF and has a more overall contracted look to it. Heel and foot width are much more narrow the RF and there's quite visibly less heel as well. He's managed to completely mangle this foot and rip off a shoe 8 times in the last 7 weeks on this one. 7 times nailed in, once time glued on.

Also, I can't seem to get this damn residual glue off for the life of me. Can't keep a shoe on, but will stick to entire hoof wall and bottom edges, no problem. What is it they say about white legs and their feet? They're the worst? yeah. 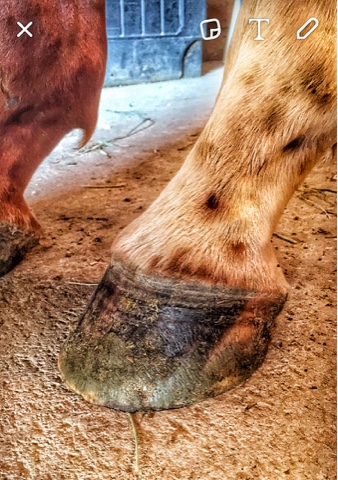 Overall, not completely horrendous feet, but not the greatest either. For a TB, I honestly think they're the best I've seen though. Super grateful he doesn't have brittle hooves or super sensitive crumbly ones like Yankee. Yanks also has ridiculously clubbed front feet and literally would not survive without shoes...even though I know they're only contracting them more. Which is super. *eyeroll*

Hoping B can transition smoothly and without too much pain. The good bad news with my back injury is that our show season is pretty much shot (yay the yearly trend continues) so we have nothing but time now. Still rather bummed about it BUT its pretty spiffy timing in the grande scheme of things.

We might be able to hit up some fall shows, and hopefully winter indoor as well but only time will tell.

For side to side comparison I put the feets together as best as I cold within the allowances of the app. I wish I could get the whole foot in there but the parameters were limiting. Kind of excited to keep track of  the changes! 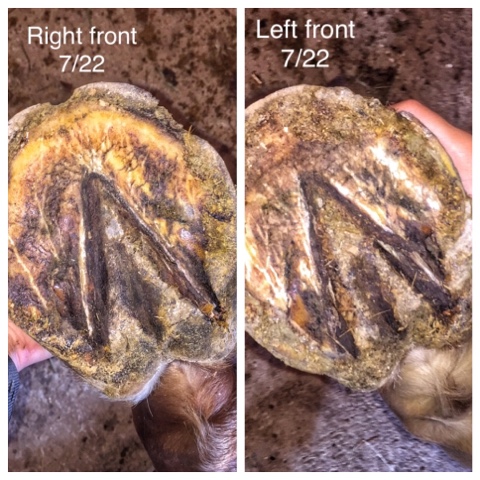 Maybe someday I will sit in the saddle again. Its crazy how much you miss it once you're NOT ALLOWED. *le sigh*