Its getting Close :D

I only need 2 more followers before I run a contest for s lucky reader to win a drawn portrait of their horse done by yours truly! It was voted on and the decision was almost unanimous! Im sorry to those who want a OTTB Tee, but I too am too poor to buy one, so my lowly drawing will have to suffice.

I've been having fun debating what kind of question to ask for the contest, but in the meantime I wanted to show some examples of my work.

Most of my stuff is quick sketches I just think of in my head, and I'm not so much a realist as an impressionist, in a sense. My lines are flowy, loose and not always connected. But I CAN do realist, as you will see in the portrait I did of my own love.

Hope you all enjoy!

Oh, and let me know what kind of drawing is your favorite. Pencil, pen, charcoal or color!


I have some examples of non horsey stuff too :P 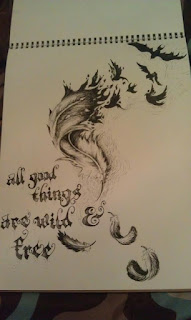 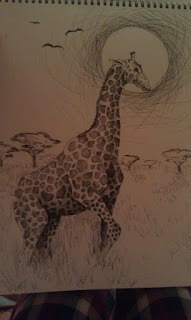 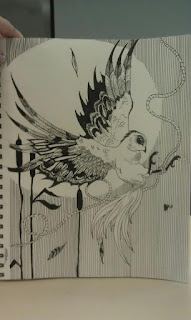 Hope you all can decide what you want :D

Posted by Checkmark115 at 3:58 PM 13 comments:
Email ThisBlogThis!Share to TwitterShare to FacebookShare to Pinterest

Forgot to show you guys the reason I love my crazy pony so much and my entry for Kate's contest! 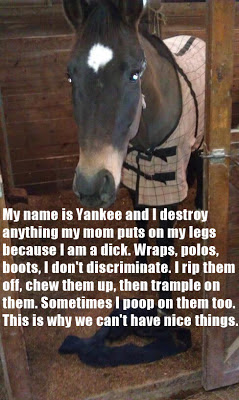 I'm pretty sure Freund would describe him as having "an oral fixation". He literally chews on everything like he is a weanling and sticks his tongue out on a regular basis.  It actually helped me teach him his one and only trick, "cookie face", which he does for cookies. Its adorable. When I had him back home and he had dutch stall doors, he would grab anything within his reach and destroy it. My favorite was when he would grab entire bags of shavings and pull them in and just rip it to shreds. I did not appreciate reins, bridles, pads, halter and lead ropes being gnawed on though.

As for the leg wraps thing, it is absolutely true without fail. You know how people try to help their horses out by wrapping pony legs after XC rounds or a hard days work? Yeah, Yankee doesn't get that. At least 7 pairs of standing wraps later, I've learned that he can only have them on a few hours, all the pillow wrap has to be covered with the standing wrap and the velcro has to be hidden with copious amounts of duct tape.

Its especially annoying when I pre-groom and wrap before a ride, forget to tie him up, leave him in his stall for a few min and come back to find the polos or boots ripped up on the ground. He's a maniac.

What I REALLY wanted to share today is the joys of owning and OTTB.

I can summarize it in one word: inconsistancy.

I love my grumpynose, but damn, he can be frustrating!

I feel like OTTBs have more inconsistent days than any other breed, especially when they are "grown ups". Its like they think, "I've been way too good for mom lately, time to throw in something I've never done before and surprise the shit out of her!" When he was a baby, it was to be expected; but just a few posts ago I was exclaiming how I think he's finally grown up and stopped acting like a full blown retard.

Yesterday, he was one of those.

Can't wrap my head around it really. He was literally psycho. Wouldn't bend, give, relax, stop, go...anything. He was an absolute asshole. I tried SO hard to stay calm, not tense up and just keep asking him to move forward into the bridle but not run away with me. Everything was the same. he's not due for a float, his saddle fits, etc. Perhaps it really is the insane weather. The nights have been in the teens and the days have been in the 50s. WTF Missouri.

I had PLANNED on practicing halts and transitions and a few leg yeilds. That did not happen.

All the halt work he would hollow his back, throw his nose up and skitter to a halt. This, being the horse who can regularly get smooth, square halts. Once he actually reared straight up and I almost fell off in surprise.

I'm pretty sure he ran around the ring with his nose in the air for the majority of 20 minutes. Finally out of frustration I said screw it and we did lots of canter work. Trying to relax at teh walk and trot was just not going to happen. It wasn't great, but at least he wasn't pulling my arms off. I mixed it up, counter canter, 10m circle figure8s with flying changes in between (which he nailed, for once) and shoulder fore.

Today, I HOPE to retry some flatwork. Sigh.

Posted by Checkmark115 at 9:47 AM 5 comments:
Email ThisBlogThis!Share to TwitterShare to FacebookShare to Pinterest

So I entered into Kate's contest!

I think its the worlds first horse Shaming contest. If you haven't heard of dog shaming I feel sorry for you. Its amazingly hilarious.

aaaand you should go vote for Yankee because he's such a little prick. I love his shenanigans.
Posted by Checkmark115 at 2:59 PM No comments:
Email ThisBlogThis!Share to TwitterShare to FacebookShare to Pinterest
Newer Posts Older Posts Home
Subscribe to: Posts (Atom)