When To Hold Em & When To Fold Em

Its obvious I have not been blogging as regularly as usual, which is fine, but it definitely feels weird to me. I haven’t even been reading other blogs for the most part. I feel a bit deflated regarding the whole shebang-- mostly due to personal things; school, work, relationship, gym, the usual.

Then of course there’s the absolutely shitstorm that was the election. I would like to say its over, but its not over…not with Trump in office.

That aside...I made an incredibly difficult, potentially life changing decision about two weeks ago and haven’t had the energy/drive to explain/divulge it, except to a few people. Mostly because the internet is a nasty place and I hardly have the energy to deal with that along with everything else. Usually its very easy for me to let it roll off my back these days, but right now I’m not so sure...Luckily, the blogging world is a bit more tame than it was 5 years ago, but I still feel like I owe the people who care enough to read this blog a thorough explanation….even though I really don’t owe anyone anything.

I’ve been waiting to announce this, due to his most recent issue with his foot & I wanted to ensure he was 100% again before finally coming out with it…. but I decided to put Bacardi up for sale.

Granted, he may never sell because he is a one of the most sensitive, special snowflakes in existence, so maybe I have nothing to be devastated about…but let me explain a little.

First, to any remaining haters, go ahead. Get it out. Say, “I told you so” and laugh a little. Better? Good, because I am not selling him due to above stated snowflake-ness & your incredibly rude opinions about how we were not right together. I fucking dare you to talk more shit about this horse and what I’ve done with him. I didn’t see any of you try and work with him, so there’s that.

No, I am selling him because I simply, obviously, 100% cannot afford it any longer.

Unfortunately life does not go the way you want it to no matter how much you plan ahead, problem solve and trouble shoot, and this is one of those times. Shit happens. I have been incredibly fortunate to have been blessed with two incredible OTTBs in my lifetime, especially at such a young age—but supporting them on my own is getting to be near impossible.

Changing jobs was a lifesaver and came just in time after Yankee’s surgery in Feb. I am eternally grateful for this position—it is not about the job. I am simply a young professional working in the medical field, loving what I do. That’s not the problem at all.

The problem is that in order to keep two, incredibly high maintenance OTTBs healthy, sound and fit is takes a LOT of money. Like, most of it. I’m sure some of you are already aware of this. Yankee’s lease-ending colic kind of put the kibosh on my most well laid plans…so I had to adjust to that quickly. It was not an ideal situation, but I have coped and I am pleased with his progress and the fact that he is still alive.

He's not going anywhere, ever. I would literally starve for that horse, because he has given me everything. Almost 12 years together, that boy isn't going anywhere. So it sadly had to come down to my more athletic, younger, lovely creature named Bacardi.

However, as much as I WISH and hope and want it to work out, it simply can’t any longer. I have stretched myself to the brink, forgoing incredibly important aspects of life in order to pay for my beloved horses. Love cannot pay their bills and I ensure you, this was THE most painful decision I have ever had to make. I think I legitimately cried for DAYS once I made the decision final and told my trainer, my parents and my friends.

So now that he is 100% sound and back in full work, I am ready to announce it to anyone and everyone. If you or someone you know is interested, contact me via FB for more details. I may be slightly biased, but I think that Bacardi is one of a kind. There’s a reason I bought him and worked through that god-awful first year with him. He is special. He is talented. He is worth it.

We are getting pictures and a sale video together this weekend, but for now there are tons of videos on my YouTube. I’m not going to front with this sale, he is HOT. He is hard to work with. He will test you. But, he is TALENTED. Anything on Youtube is proof of all of that.

All I am requiring is first right of refusal, references and updates. He can go to any state in any discipline, but I have a feeling this horse will succeed most as a jumper. I also think he might be a fantastic hunter. Square knees, auto changes and lovely, flowing gaits really do scream hunter. I love that he can be a quick jumper, but also meander around jumps in a hunter fashion. 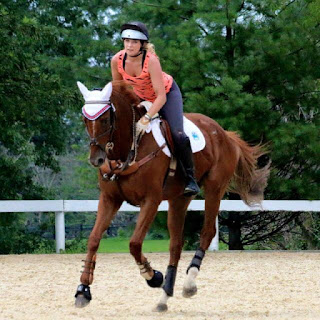 I know this horse has the potential to be successful, I simply don’t have the time or monetary resources to make it happen any longer. It absolutely kills me that this is the reality, but I also can’t keep putting off paying other bills in order to showcase my youngest in hopes of someday becoming great.

I would have loved to attend a recognized show every weekend. Hell, we could have been much farther along if I had the funds. Its fine, I’m not that competitive anymore, but damn its hard to sell a horse for what they’re worth without a show record.

He will NOT be sold to the highest bidder or ASAP. I refuse to let this horse go to someone who might potentially abuse him again. Luckily, I DID have the gumption to work through his issues and I can honestly say he is a true, solid equine citizen at this point. He now comes when called in the field, lets you halter him in the stall, GOES IN STALLS, blankets, crossties (BIG DEAL), TIES, waits at gates and doorways to be led through, doesn’t kick, bite or rear anymore, trailers (!!!!), clips (!!!), stands for the farrier and even tolerates the vet. He is sweet as can be and instead of running from humans he now welcomes their touch. Sure, you can’t clip his ears and shreds blankets like its his job, but god bless…he is a different horse now. He has come such a long way in the last two years, it would be a shame to reverse that completely. All I want is someone who understands him for who he is and doesn’t expect to find a unicorn. Every horse has his flaws, but I know that B is worth the continued time and effort. I just wish I could be the one to give that to him.

The worst thing is that he's been an absolute dream lately. I get off of him beaming and incredibly sad because I know that this isn't going to be forever.