THIS IS URGENT!!
Which blanket do I choose???????
The tack whore inside me wants both but I can only choose one..
The name brand Amigo stable sheet at a lower price but FUGLY color
OR the pretty Blue plaid off brand stable sheet thats JUST slightly more expensive.
Decisions.
Posted by Checkmark115 at 12:26 PM 9 comments:
Email ThisBlogThis!Share to TwitterShare to FacebookShare to Pinterest

MY WHITE SHOW BREECHES DIED AND I AM SAD! 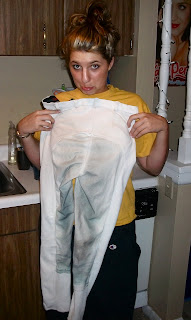 Its true. After 6 years, they have died a tragic death.
I ripped a giant (and by giant I meant= ass-baring, drafty cold large) hole in the seat. Not to mention they were a size 24....I wore that in like, sophomore year in HS. And ridiculously black from the saddle and my boots.
guess I will have to get new ones now. Drat. (TACK WHORE INSIDE ME GETS EXCITED!!!)
In other news, I am working on a rather large, difficult project for my advanced color drawing class. We had to take 5 artists and compile a composition based off those artists work.
I am a HUGE fan of Kim McElroy as well as Marcia Baldwin, Jana Fox and the 1700s artist, George Stubbs, so that is what I tried to base my drawing off of. I also referenced cave drawings and other random artists I found on Amazon. 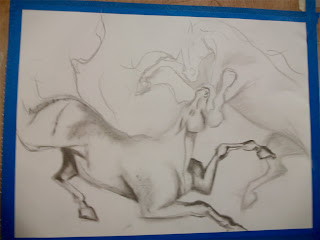 This was the first step in my drawing. I did several prelim sketches and color combos as seen on a previous post here but this is what I came up with. I was going for a fight persay, of good vs. evil. Top, good, bottom, evil. Its NOT supposed to be proportionate or very life-like. 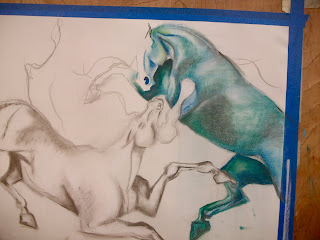 Adding some color to the "good" horse 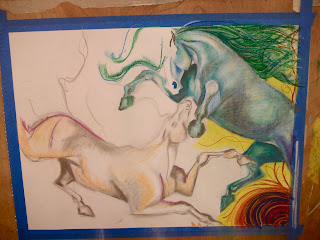 So this is all I have 3 hours into it. I hope to get more of the red/purple swirls in, but I don't know if it will ruin the picture or not. The manes and tails of both horses will be intertwined too, which I think will look super neat! The bottom horse will be black, red and orange and have red eyes.
I wish I could have done just the heads because I adore drawing equine faces and then I could have made the distinction between good and evil better, but then the composition wouldn't be as good as it is. Since its for a grade, I have to do it the way it was assigned, and that is compostion and fillling up the page, along with some other junk like color relations and using techniques from the artists I chose.
I will hopefully be finishing it up in class tomorrow and will be able to show you guys the finished product!
And for a few gigs (thanks to EN for sparking this beautiful idea), this is the story of my everyday life. 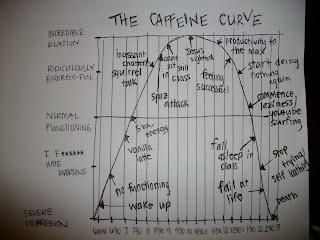 Posted by Checkmark115 at 8:58 PM 10 comments:
Email ThisBlogThis!Share to TwitterShare to FacebookShare to Pinterest

Right meow my life is an epic failure. And yes I have been preaching this for a while now. And I know you all are sick of hearing it, but I'm just going to add on the shitpile by saying that everything sucks and I want to die right now.
I just cannot handle stress. Or this much stress. I won't go into detail because as much as I love bitching, its just too much to think about.
Why do I have the worst luck in the world...WHY. What did I do to deserve this??
Yankee decided it would be super funsies to rip himself to shreds...repeatedly. I already dealt with a torn out tail, busted up hips (that still haven't healed almost 2 months later), swollen, busted hock, multiple bite wounds, scraped ankle, and now a shoulder laceration. I call it a laceration lightly because it not as gnarly as some I've seen, but I def flipped my shit though because he is my baby and it was pouring blood. ACK!
I flipped out. And it got all over me. Ew.
So I went to class all worried and thinking about the half-million things I need to do and I wondered...life doesn't get much easier and I need to deal. But how? I feel like I'm drowning right now and I'm not even in grad school....
So I made the decision to try and turn a new leaf. I put my 2 weeks in at the place that sucks my soul, studied for like 8 hours over the past 2 days and I put color in my hair. Its helping a bit. I still feel like a train running off the tracks, but new RR are starting to appear. 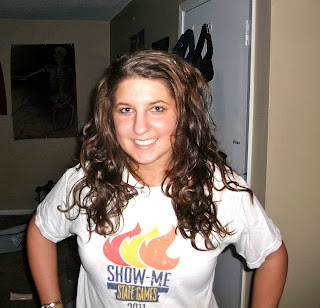 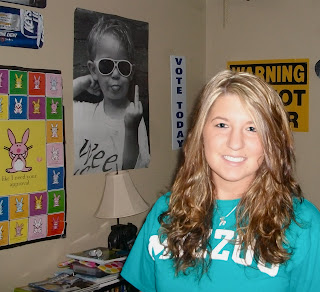 After! And this totally looks like I'm an alien or something! Isn't this weird??
Anyways...
So now he is lame.
Not like we were gonna do much of anything, show wise, but it happened at a completely bad time. You know? I will be free from work, and I will actually be able to enjoy my  horse and have time to ride, and not rush-rush lets get this done so I can work/go to class/study.
Le sigh. 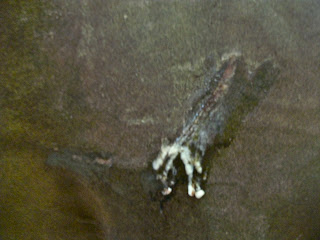 MMM yeah delicious. Wish it was still bloody cuz it looked so gross and nasty, and you could see it better. And yes, that is pus, Gross.
So, poor ponyface is not fairing well out in the pasture. Its  so sad...its been a year since he's had a pasture and now he's getting beat to a pulp out there.
Remember Pronto though? He moved to the barn 2 days ago and he protects Yankee out in the field. SO. EFFING. ADORABLE. Besties! Its so hilarious to see two grown ass horses sticking together like lovers out in a field with 6 other horses. But adorable nonetheless. 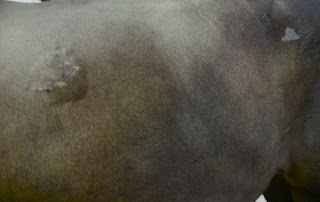 Just a few of the "war wounds" yankee got in the field after only like 3 days. 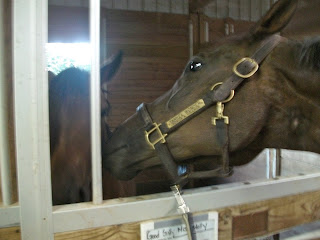 He loves this pony! Her name is Molly :) She is super adorable! 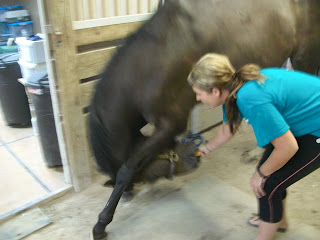 Playin' with him since he is now laaaaaaaame.
Alrighty folks...hopefully I can quit my sob stories and get all productive like and get up off my ass and do work and maybe stop being all boring for you guys.
At least I can live vicariously through fellow bloggers with riding in London, new horsey jobs and new horses. Congrats to you all, you know who you are!! :)
Posted by Checkmark115 at 8:25 PM 6 comments:
Email ThisBlogThis!Share to TwitterShare to FacebookShare to Pinterest
Newer Posts Older Posts Home
Subscribe to: Posts (Atom)