First off, I have been forgetting to thank everyone for all the well-wishes for both the beast and myself! It is GREATLY appreciated <3 p="">
Secondly, more earth-shattering news ahead.

Never in my life have I been more excited to go for a walking hack.

He felt really great actually. Quite forward and chipper. It was almost like he was happy to be back at work again. I am giddy that hes "back at it" WAY before expected.

I will admit that I couldn't resist asking for a little bit of trot. It too felt better than I expected, but far from great. I can definitely tell he's lost some muscle and he is extremely on the forehand. Like, really on the forehand. I can't blame the horse, his back feet have been killing him for weeks. But I think we are out of the woods and in the clear (s/o to TSwift) & just need to get back in shape.

I'm not going to go out and sign up for a bajillion fall shows, but I am excited to slowly rebuild our muscle together and heal.

Partners who heal together stay together.


Lol at how small that saddle is for me. I was also wearing my new Piper breeches and have a few words to say about them. Look forward to a product review on them!

Speaking of words, My bad luck seems to be running away with me because my BRAND NEW Fitbit fell off while I was riding at the fucking walk and got absolutely destroyed by a vehicle.

What kind of FITNESS band falls off randomly? Especially a brand new one? I am crushed, much like my Fitbit and the company may or may not have heard a few words from me. And they weren't sweet as pie thaaats for sure. I am a reasonable human, but come on.

Posted by Checkmark115 at 8:49 PM 10 comments:
Email ThisBlogThis!Share to TwitterShare to FacebookShare to Pinterest

I dusted off the old hag today with the full intent to do nothing but observe his movement and see how he was doing.

I was not expecting anything special, considering hes been sitting in a paddock stuffing his face for weeks.

Thats the face of a horse who's having none of it.

Don't get me wrong, he was perfectly civil.

Thats very unlike him.

Hes not horrible anymore like he was a year ago, but he also has way more spunk usually.

Today he was perfectly fine shuffling along at the walk.

I studied him. He didnt look off anywhere. Just....eh. Not really moving. I can't blame him, he was probably creaky and felt a little stiff from all the isolation.

And then I heard it. 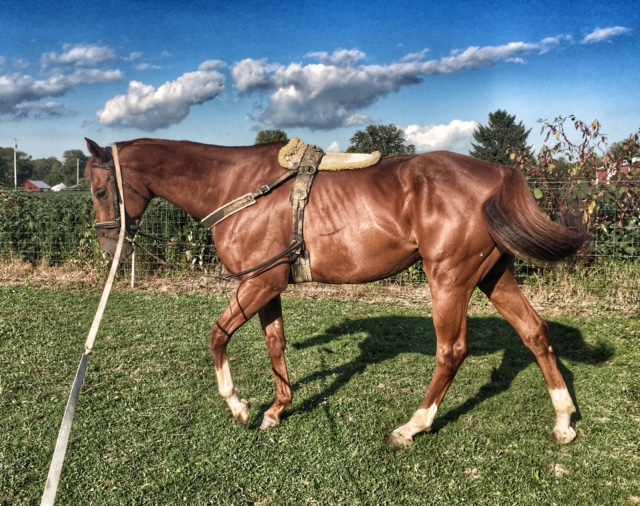 A very loud cracking sound everytime he stepped forward with his RH. (As a reminder, this was the foot with the abcess.)

So I listened closer.

Yep. Definitely cracking. Every single step with that RH.

Hes wasnt off. Did not seem concerned at all. It was just...cracking.

I asked for a trot and it went away.

OK what was going on?

Back to the walk, there it was again.

I watched his stifle thinking it might be there, but no, it definitely seemed like it was coming from the lower region.

As I stated before, he didnt seem lame, just a bit out of shape and lethargic. I also wasn't pushing too hard, but I still didnt want him thinking trifling around like a western pleasure horse was OK so I asked for a bit more than a shuffle and didn't get much. Thankfully without grumbling from him though, which was nice. I remained concerned though.


Fucking christ I hate giving horses time off. He looks like a completely different beast.

So what I'm asking from all of you is if you've experienced a cracking or popping on joints after a long break in work? I of course, am freaking out because I am a neurotic, anxiety ridden horse owner with a horse that has made it his main goal to cause me stress.

I've literally never had this happen to any of my horses and I've been around the horn a time or two. Even after MONTHS off.

Posted by Checkmark115 at 7:25 PM 6 comments:
Email ThisBlogThis!Share to TwitterShare to FacebookShare to Pinterest

I turned my horse out.

He was not lame. 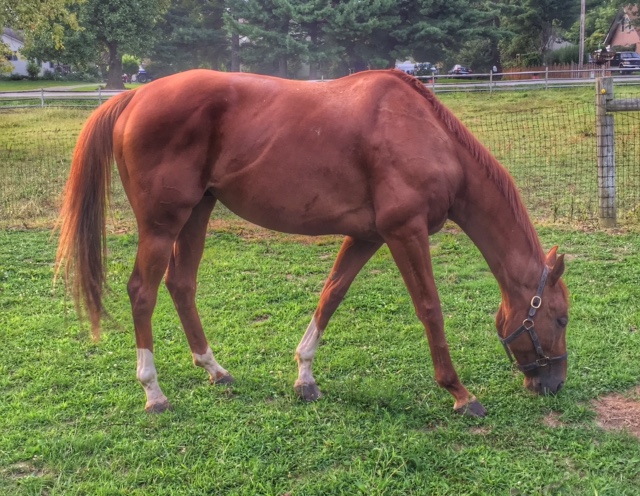 Stepping back it looks like I completely abandoned him.  You can definitely see some muscle loss. His tail needs some major TLC. And that mane needs some grooming. Overall though, I'm ignoring the topline with extreme denial and celebrating that my horse is fucking sound & healing quickly.

My father deserves a trophy for doing stalls for a week, scrubbing and filling water troughs, dispensing foods and tending to the red nugget. I *almost* stressed that I wasn't the one caring for my horses because I am a complete control freak about some things, but I literally did not care.

Speaking of, I am finally back into the realm of the living, having adjusted to the pain, healed a little myself and finally been able to keep food down.

I dropped 13lbs in a week and I'm pretty sure all my gainz have been lost. But hey, more goals to strive towards right?

The horse was feeling pretty great three days ago when I hobbled out to check on them just in case dad had somehow overlooked something. He was cantering around his paddock tossing his head around and I was like, nah I will wait to turn you out, just for good measure because I'm nervous and you are made of glass apparently.

I almost felt bad not letting him out in the pasture sooner, but I was trying to make it easier on The Faja, and I really was still worried...for some reason. Because you know, horses. What if he gashed his leg and I couldn't be there to fix it. Or stepped on a nail. Or broke his leg. Or died.

So, yeah, I played it safe.

Please stop maiming yourself B, I can't take it.

Neither can my wallet.

SuperFarrier also advised to leave the wound open from now on and it developed a lovely scab and looks great, despite said scab grossness. SuperFarrier came out to check on it while I was in the hospital and dealt with my drugged up text responses to him. I love him.

So today, in typical me fashion, I probably over did it a little- but the stalls got a great cleaning, rebedded, horses got groomed, tank was scrubbed, aisle meticulously swept and hay stack tidied.