I was going through my daily checklist of sites to visit...FB, pinterest, dogshaming, failbook, MSN news...you get the idea, I waste lots of time at work. Anyways.

I stumbled upon an article on MSN about "Equestrian Estates" and was wowed by the $25 million price tags on a home in Ocala. Oh to be swimming in monies. Then, in the bottom corner I saw a tiny little link to another article, "How Much Does a Horse Cost?". Intrigued, mostly because the MSN  writers are wildly misinformed and I enjoy reading their garbage in my free time, but also because I wanted to see their numbers.

It was....mostly accurate in my opinion...surprisingly, considering the massive variation in horse care costs. Their averages I felt were on the low end, but still mostly accurate, unless you live in a coastal region. The only thing I felt they underrepresented was farrier cost..they said minimum $100/maximum $500...IN WHAT STATE?? I want to live there!

What I'm interested in, coasters and southerners, is how much do YOU pay for things? No need to detail it out, but I AM curious!

For me, my horsey costs (not including anything extra, like tack or shows) has significantly decreased since I moved from Ohio to Missouri. I really have no clue as to why though, perhaps less of a demand for horsey services, since I am certain there are less (especially competitive) horses here in the BF of nowhere, than in other states.

The only that increased for me, was board, even though the price is significantly less here. I had my horses at home in OH, so the additional cost of boarding pinches my wallet a bit  more than I'm used to.

In comparison to OH

Even with boarding in MO, its cheaper. I know in OH, a good full care boarding place (indoor, jump field, nice stalls, good hay and grain) was $660...upwards of $800. Here in MO, full care in my area is $350-$475, with all of the niceness included. I know its more expensive in STL and KC but those are bigger cities.

Anyways, too many words. What do you all pay?
Posted by Checkmark115 at 1:55 AM 15 comments:
Email ThisBlogThis!Share to TwitterShare to FacebookShare to Pinterest

Reunited And it Feels So Good

This week has been quite uplifting. SO many good things finally aligned for me...been a long time coming. Not over the hill yet, but I can honestly say I feel 100% relieved already.

That being said, it got wicked cold here pretty fast, (considering it was 60-70 degrees a few days ago) low 20s-30s at night and 40s during the day so its making me not want to brave the freezing wind to ride. GAH.

Few points of news to note:
-Signed up for a schooling show for this Sunday
-Sold my sweet pony- she needed a job and I needed the money. Byebye baby Zephyr :( bittersweet.
-Got a few pieces of new tack (see below :D)
-Jackie came to visit
-We've made plans for next show season
- I still need hay...like bad.
-JACKIE IS MOVING BACK TO COMO :D

Jackie came to visit a few days ago so OF COURSE we had to jump! I think Jackie jumps Yankee better than anyone, including myself. She's so fearless. I'm getting better, but I still get anxious over large, single oxers sometimes. Lines are no big deal and really not many jumps are. It takes tiem to get over an accident though and I had 2 within a year. A certain Stacey (:P) won't let me post the picture, but it was pretty jarring to my fearlessness. I also had a pony that would jump anything wihtout question (RIP Spirit), and Yanks is a little more tricky than that.

Spirit would put up with any bad riding and still jump over 4 ft. Yankee requires a mediocre ride, but if you drop him or are nervous, he knows and will refuse. Otherwise, he's the easiest guy to jump in the whole world. Funnily enough, only 2 other people have jumped him over a course (Jackie and Emma) and 2 others jumped him over a few fences.


Dis is happy Jackie. Her Isis is still out of commission so she was happy to have Mr. Yankee back for a little while 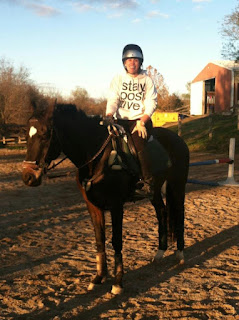 And look at this gem she dug up for me. A FIVE WAY BREASTPLATE. We are toats legit eventers now. Like, really. S'fo freeee. 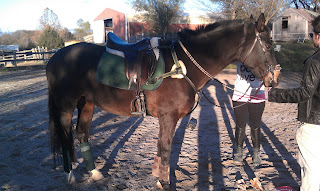 We did a few courses with 2-3 stride combos, a bounce to the oxer below and some tricky rollbacks. Yankee was eating it up. Wish we had video for you! And look at those knees! Getting better and better. 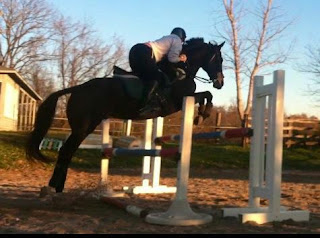 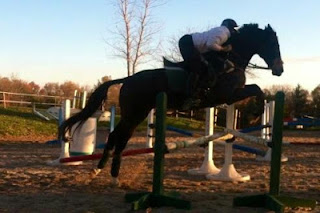 Jackie has also decided to move back to CoMo so we hope to team up again and help each other with our next show season. I plan on saving all winter (I'm working 3 jobs)  so that we can do at least 5 shows in hope to FINALLY get our damn NQRs so we can move up to Prelim. We are MORE than ready. Yankee has improved so much over the last 2 years that I KNOW he is ready, it just sucks that I never had the money this year to show because even in the first outing with a bad XC round, we still ended up 7th. Sucks we have no XC jumps to practice over...so that is our downfall, even though its our favorite phase.

Anyways, Jackie wants to work the ponies (Isis ad Yankee) jumping and I'll do more dressage, especially with Isis. We will both work our own, but I think collaborating will help all 4 of us. I'm excited about the prospect of a new season.

As for Zephyr, I sold her last week. I never really planned on it, but I needed the money and she needed a job. Shes turning 5 and is broke to drive, but I never did anything with her. Her new owner plans to show her in tandem harness with another chesnut. I hope she's happy there :)

So for this week, I plan on doing some dressage work in prep for the schooling show Sunday. Hopefully we still got it ;)