My first horse Dolly a little chestnut Arabian mare with tiny white spots, I received as a christmas present when I was 10 years old. Pretty much the best christmas ever for a 10 y/o girl who had always wanted a pony!!

She was 18 when I first started riding her (pretty old for a horse) but she was a little pistol. I learned how to fall off on that horse as well as  how to ride and we went through so much together; 4-H, U.S. Pony Club, Eventing, Hunt Seat showing, trail rides, and backyard fun. She was the best first horse anyone could have wanted.

My next horse, Spirit a grey Anglo-Arab sometimes called by my instructor and friends who witnessed this little horse’s talent, The Wonder Pony. This boy I found in the Dayton Daily News classifieds and begged my mom to go see him. Ragged and a little underweight I just had to have him, we were both 12 & I saw the potential in his eye and felt the need to rescue him from his tribulations. We paid a pretty penny for a  horse who looked so useless and bedraggled but I couldn’t leave him. We soon learned this horse would be difficult and he was petrified of shadows and horse trailers. It took me 3 whole years to get him to go into a trailer on his own, but I soon discovered how much I truly enjoyed training. Eventually I began to train him in dressage and jumping and we began to compete in eventing and 4-H shows.

He endured my first dabbling into the sport of Eventing and Dressage and we soon dominated. He was unstoppable. He could jump to the moon and would do anything for me. We competed for 5 years in eventing and everyone noticed this “little horse that could”.

Dubbed the “wonder pony” for his ability to outshine the more experienced and larger horses with his extreme ability to jump. I learned so much from  him and was terribly saddened when his hocks degenerated too much to continue pushing to Prelim & I had to retire him to BN and sell him.
Sadly, after a few years of BN competition and being spoiled to death, he fell ill one weekend and had to be put down at Hagyard Vet Clinic,

RIP Wonder Pony, you will always be my heart horse.

Soon after selling Spirit I received Murphy (aka James Murphy) a 6 y/o Irish Sport horse and my horse Yankee (See About Yankee pg) a 3 y/o off the track thoroughbred (OTTB).


Murphy a large (16.1 hh) chesnut gelding came into my life very soon after I sold Spirit. It was hard dealing with this horse as he was very stubborn, however so was I. Strangely enough we made a great pair. Murph was my project horse- a horse I intended to resell within the year for a much higher price. The first few months were tough with him. Murph was only green broke as a 6 y/o but yet had the toughest mouth and most ridiculously hard headed brain. That guy routinely jumped out of the pasture and led me on chases, refused to be caught in the pasture, was head shy, refused to be saddled, threw temper tantrums often, spooked easily just for fun and tossed me a few times just because he could. Gosh it was hard working with him. But I persevered for I will never give up on a horse. Eventually my persistence paid off and murphy and I competed in a few shows and did fairly well. His dressage was getting good and this horse could jump four feet no problem. I put him up for sale and quickly sold him for $14,ooo. I really enjoyed my time with this sometimes obnoxious horse, but I learned how to deal with horses that quite truly did not care for humans.

Schooling at my Ohio farm 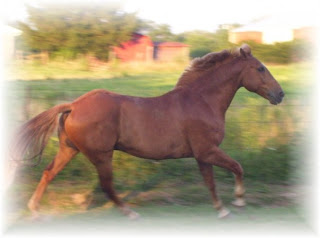 After selling Murphy, Yankee was alone at the Vollmer farm and I convinced my parents that Yankee needed a buddy. He ended getting 2. I found a pair of mini horses in an ad in the same newspaper I found Spirit for $200. I promptly bought them and brought them home for Yankee.

Ajax, a GORGEOUS pinto stallion and his companion Pearl, a black pregnant mare that became Yank’s pasture mates. This little duo  were the loves of the neighborhood and Ajax even did birthday parties- he was trained to cart (by me) and gave lots and lots of pony rides to children. He was a card and the prettiest little guy

sadly I had to sell him b/c Pearl was due to foal and we just didnt have enough room or money at the time to have 4 horses.  Pearl was a sweet girl and lived in the pasture as a companion to Yanks with her  baby Zephyr a chesnut filly (aka Z) I also had to sell Pearl when I moved to MO; she went to a family with kids who love her!  Z was the most darling thing you could ever imagine and is just a big puppy dog. We had a close bond and she would follow me anywhere. I trained her to cart and brought her to college with Yankee and I to MO, but sadly sold her my Junior year.

Cowgirl a 4 y/o, 14.1hh,  purebred, chesnut Quarter Horse mare(QH)  belonged to one of my clients and I was responsible for all her training and care. She is a sweetheart and really tried hard in all her training but she did have her “mare days”. Cowgirl came to me underweight, headshy and very green broke. Now she is no longer head shy and is schooled in dressage and excells on the trail.

Cowgirl-scruffy here, she really is pretty, I swear!


Dutchess a 8 y/o, 14.3hh, purebred, chesnut QH mare is one of the best trail horses I have ever ridden. I never thought that there was a point in a “real trail horse” but it proved nice when I wanted to take my niiave friends and father on trail rides with me. She is a tank and cancarry over 300lbs for more than 6 hrs on the trail and will slug through mud, water, hills and brush for hours. She is truly fearless on the trail and is one of the best. Her attitude was true to the Red Mare stereotype and we never really clicked. Before I left for college in 2009 I sold her to the mother of my best friend and I actually still get to ride her on occasion! 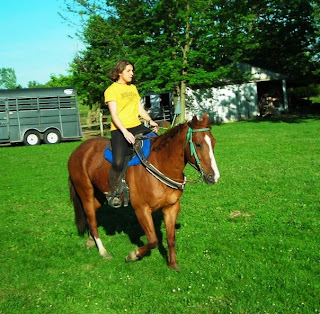 And that brings us to present day with my newest acquisition, Bacardi and my long time love, Yankee