Questions and Thanks Yous

I have two pressing issues at hand that I would love opinions on.

1)What level I should start with this show season
2) WTH is wrong with my horse and what do I do about it??

So let us begin with A.

I have 2 months till our first event. I must decide wether to be super extra excessively careful and go Novice first time out or go ahead and do Training. The course looks super easy and I am not worried about XC. It is the stadium that always gets me worried (without me knowing I am worried then right in the middle of the course I am like, “OH SHIIIIIT. Shit. SHIT!” and then we knock some fences over, miss some distances and generally fail all around) and why after 3 T’s last year I moved down to N midseason then back up to T.

Last summer I stupidly decided to run Training first time out after 7 months of not riding and myself coming back from a horrific injury that left me on crutches for about 6 months and an extra 20 lbs for my horse to lug around. Yankee had been leased out but not ridden hard or schooled for eventing. We crashed and burned hard and it shook our confidence on stadium real bad. I was dumb, no need to tell me that. 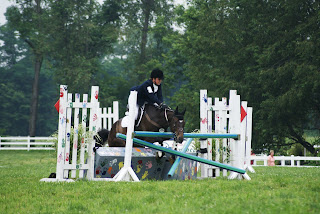 This year though, he has been in work since September. We jump once a week. School dressage every week (2-3 times a week), condition once a week mostly and do lunging sessions to stay supple. To me, I feel confidant running training first time out since we will do SEVERAL Dressage shows and Jumper shows before May 14. I feel it is a waste of $$ to run Novice, and we all know I am poor. I really want to get 4 NQR’s this year so I can qualify for Prelim AND T3D.
I just can’t justify a $500 show at a level we both fall asleep doing. Novice was forever ago and we should have already moved up to Prelim. 3 years ago I broke my arm mid season, 2 years ago I didn’t have enough money/he was afraid of spectators XC and spooked so bad that we missed fences completely and OBV got penalized refusals (thus not receiving enough NQR’s), last year I was fat and not strong enough and Yankee was not schooled enough consistently… but this year…we ARE ready.

What do you think?

I have to decide by Mar 31 since I am mailing the show entry then (spots fill fast).


As for B….well it puzzles me big time. Tuesday I took Yankee out for a dressage school in the indoor.

Let me just say he is more confidant and loose in the outdoor and in the indoor he is choppy, hyped up and stiff to the left. It puzzles me.

Anyways, he was…HORRENDOUS. I have never ever in my 6 years owning him had him be this bad…he was tossing his head every like, 15 seconds, bucking super hard at EVERY transition and in the canter, SUPER hella stiff to the left (like he would not bend or even stay on the wall…) and dead to my left leg. Mostly the issues were to the left..

I tried just walking and doing suppling excercising, bending away from leg, giving at the poll, etc but he would not have it. He either tossed his head, lost impulsion or tried to bite me….WHILE I WAS MOUNTED!? WTF!?

Where did this evil ponyface from hell come from?????

These have all been cause for issues in the past, but the tooth soreness I am ruling out since I worked him in sidereins Monday and he was perfecto. So…not an issue?

Saddles…I checked, rechecked and triple checked his fit. It is still perfect. Nothing in the saddle pad, girth fine, not ouchy anywhere on his back when I palpate. He does pin his ears something fierce when I saddle him though but I always attributed that to the leaser who had him over the winter used a bad girth (gave him galls), too small a saddle and cinched him up too fast (since he started doing that right after I got him back from her). But I have a different (super expensive really nice for just that reason) girth, use my own saddle fit for him and I cinch super slow…so not an issue? Or do I need to start searching for a new saddle?

Blanket. He has weird shoulders. No blanket fits him perfectly and I am too mega poor to even contemplate contacting someone to make him a custom. I have 5 different turnout blankets for him (EBAY!) and rotate them. In the past he has rubbed his shoulders raw and the blanket has pulled too much on his booty, so I got new, bigger sizes and rotate them. He used to pin his ears when I went to put the old ones on, but with the new system he is fine, and no hair rubbing of any sort…so not an issue?

Ulcers. The only other thing I can think of. He had Ulcers from the track and suffered with them for 2 years before I diagnosed them. April-September he is on UlcerGuard but I take him off in winter because I feel it is unnecessary since we don’t travel or show at all from Sept- April. However, classic signs, pinning ears when girth, ouchy on the sides and just all around grompy. So, I ordered Ulcerguard and put it on expedited shipping and he will begin tomorrow. I hope it helps clear up his grompy-ponyness because I am seriously baffled by his random ass mood swings. He swings harder than my bi-polar friend and it is SO WEIRD.

What do you guys think? Am I ignoring blatant signs and brushing them off or do any of you think there might be a problem?

I just don’t understand how one day he can be brilliant and the next just awful. It happens. EVERY. WEEK. SO inconsistent!! It’s getting severely discouraging and frustrating.

And for your entertainment, here is a photo of possibly the worst face I have ever made while riding dressage. My jumping pictures are way worse and usually involve my tongue sticking out, haha! 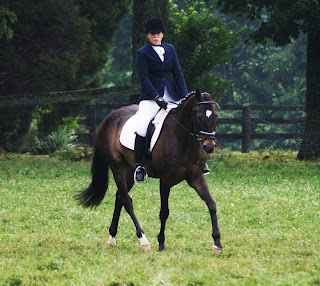 And thank you to those who gave me advice on the posting...I have no idea why it is so psycho sometimes but your advice worked!
Posted by Checkmark115 at 12:43 PM 6 comments:
Email ThisBlogThis!Share to TwitterShare to FacebookShare to Pinterest

This has happen before.

Why the F can't I publish it? Do I need to type it on blogger and not copy paste?

Makes me want to hurl my computer down 7 flights of stairs.

The post will be up tomorrow sometime, I just don't have time to do it today.

Anyone else have issues with blogger??
Posted by Checkmark115 at 1:35 PM 5 comments:
Email ThisBlogThis!Share to TwitterShare to FacebookShare to Pinterest

So much shit hit the fan I cannot even start.

So yesterday I was really pissy and wrote this really epic long depressing post about how I hate my life and I will never succeed and how I am a worthless human being. Good thing I succumbed to tears and never posted it, you guys would have me committed. I ended up having a pretty horrid panic attack at work though, and they sent me home because I.could.not.get.it.together. I did not have my KIT (Keep It Together). I was very productive once I got home and it lightened my mood. All HW done and I cleaned all the things whilst bawling my eyes out. It made it all bedder.

College has stolen my soul.

This morning I got up early and was going to ride my horse but I forgotsies my bootsies at home so I lunged him for a good 30 min and gave him a good grooming.. This kinda effed up my weekly workout plans for him but I can make it work...I think. 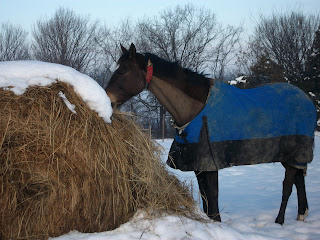 He was not enthusiastic about coming out of the field right after breakfast. Plus it was cold. Note the f***ing snow. Tomorrow gonna be 73. WTF Missouri, wtf. Come on! 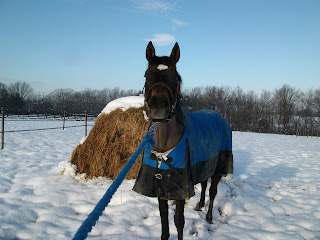 Despite the cold and unwillingness to leave his hay noms he was realy good this morning. Loose, active, calm. I was happy with that :) 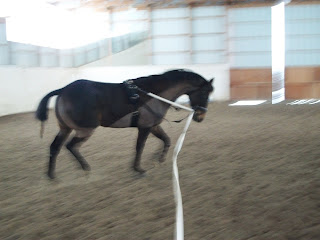 Also, I got word back today about equine Affaire. Good news and bad news. Good news, I got accepted to a clinic and will onyl have to be there a day and a half and I won't miss any class. Less stall $$. Less excercise for ponyface and myself. Bad news, I only got accepted to one clinic, I won't miss class and driving 16 hours in less than 3 days worries me a little. Lotta stress on Yankeepoo.

Daniel Stewart wante dus so that is neat. Neal Shapiro had like 100 ppl. apply and unfortunately I did not make the cut. Sad panda. Reese Koffler Stanfield made me a stand by rider, meaning if someone can't make it, I am the next in line...Guess that's better than nothing and one clinic and a breed demo is better than none! Plus I get free admission to all the days :)

so, sadface and happyface all at once.

work friday, sat and sun....fml.
Posted by Checkmark115 at 9:06 PM 5 comments:
Email ThisBlogThis!Share to TwitterShare to FacebookShare to Pinterest

Today I rode Pronto for H since she is out of town. I lunged him yesterday. He is biiiiiig boy but very sweet :) 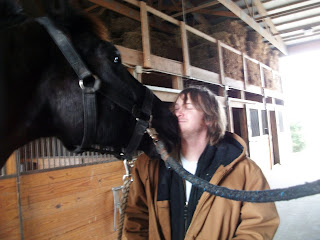 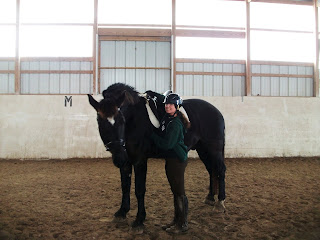 HE IS MASSSSSIVE! I am 5'9 (This is a bad angle too, his head isn't really that big) 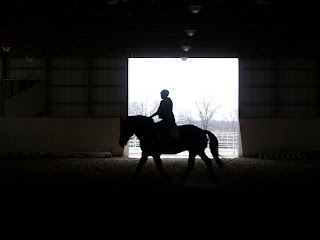 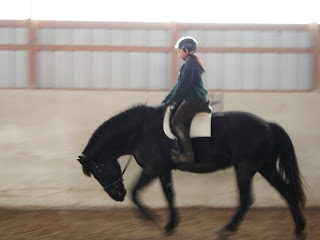 He was a good boy. I need to ride more of a variety of horses...I am getting too used to Yankee! I had a few min. where Pronto and I were like wtf dude/girl on my back. Lol, when Cheryl gets back from FL hopefully I can start riding here babies again.it

I jumped yankee the other day. I can't remember what day it was but I haven't ridden him since :( He had a little cold and a vet appointment. Got his teeth floated and shots and well as coggins drawn. I think his mouth was a lil ouchy so I didn't ride him afterwards. SUCKED cuz it was super nice out. I didn't rider him today either because I have TONS of hw and his mouth was swollen....poor pony.

I am getting really tired of not being bale to ride him 4 days a week. STUPID COLLEGE. I know I won't be able to ride more than 2 days this coming week either due to exams and projects due... 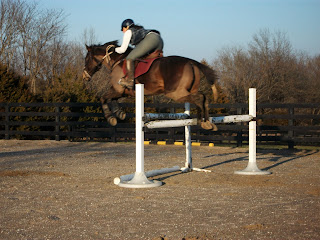 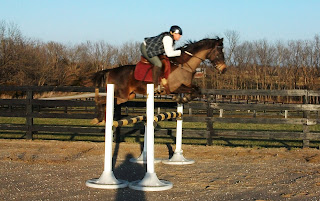 flying over the oxer 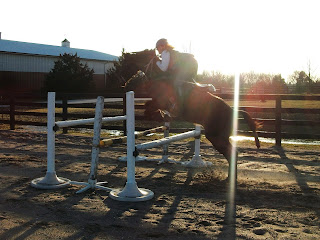 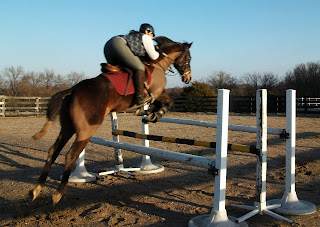 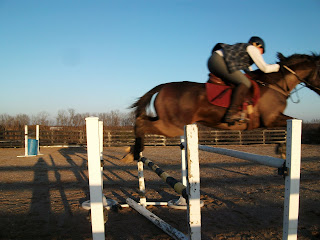 triple bar at its highest 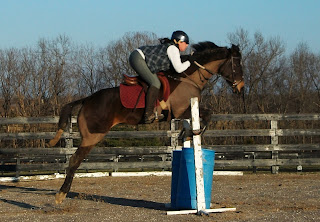 He was pretty bad that day actually. Kept taking off super early or really late and hitting the fences. he really was not listening to my aids at all...I was trying to check him 5 strides out so to not interfere....but he really wasn't listening at all. I usually am not afraid for our safety but he was literally charging the fences so fast I thought he would go straight through. So I lowered the corner and had him canter nicely like a good pony for about 10 min. Did it each direction and he was calmer. I also asked him to shoulder in/fore up to 4 strides out and that helped him concentrate. OR, I would ask him to leg yaild over to the fence. Better.