Oh, baby, we made it! 100 beautiful, interesting, wonderful followers! I love it :)

As promised, I shall be running a contest for anyone who wants to enter. Its pretty simple. I have a trivia question for you, I want your answers, and the winner(s) get a hand drawn portrait of their baby! Horse babies, not real ones.

Note I said winners. Yep. Two. I shall explain.

To see some examples of what mediums and styles I am most proficient with, click here.

Q: True or False, Yankee can freejump up to 5ft.

If you want to include with your answer a little bit about yourself and your horse(s), I would love that! Not necessary to win, but I know there are some of you that aren't in my blogroll and/or frequent commenters.

Contest runs for one week, so it closes next Saturday.

Hope you guys find this fun!

As for the previous comments on my last post, I appreciate them as always :) Getting and keeping a rock solid core is difficult. I loved the comment about the "photo clinic", I didn't even think about the landing equitation part of a fence!
Posted by Checkmark115 at 5:11 PM 33 comments:
Email ThisBlogThis!Share to TwitterShare to FacebookShare to Pinterest

Yesterday we played around over a grid and practiced some 3'9 fences. I set up a 5 fence grid, all one strides and a 3 stride line-vertical to oxer.

The WWU Show is only 2 weeks away and I've been avoiding jumping 3'9 verticals. I have a deep rooted fear of vertical fences, for no real reason other than my own incapability to get over it, per say.

My horse takes such good care of me, that there is really no reason for me to be anxious about those giant people eating fences, but I just can't stop worrying we will crash right through it.


As a warm up we played over the grid,  and went through diagonally towards to vertical on the outside line... 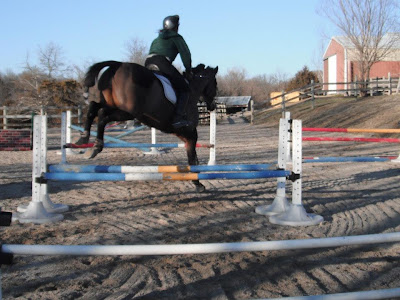 I LOVE asking Yanks  to go over fences diagonally! It really plays with their brain and helps them to jump better over the bigger fences. Sometimes too in competition to get ou tof a tight spot you have to take the diagonal option so its always good to practice.

We hopped over the vertical a few times at 3'3 and I worked on staying where I should (no jumping ahead) and practicing my auto release. 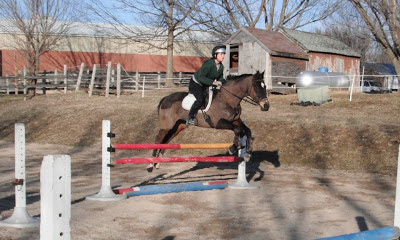 Then we jacked it to 3'9. SCARY. TERRIFYING. IMIGHTDIE. The hardest part for me is to WAIT for the gosh dang fence to come to me and not jump ahead. It really throws Yanks off, but he always saves my ass no matter how much I screw him up... 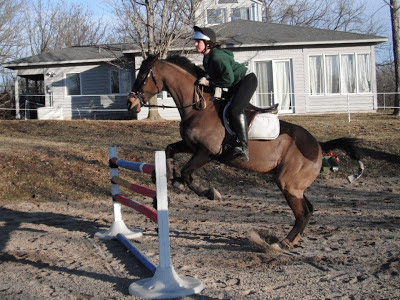 GAH. Why do I revert back to this in fear? Luckily for me I have a horse who could care less anymore. When he was a wittle OTTB, he def wasn't as life saving. So lucky to have my clerp clerp.

I think we tried it 7 times and almost all of them we nailed perfectly! Yankee seemed bored actually, but he was jumping with such bounce and loft that I didn't mind too much. Funny thing is that massive oxers dont bother me a bit, but  I feel much more prepared and relaxed about tackling 3'9 verticals. 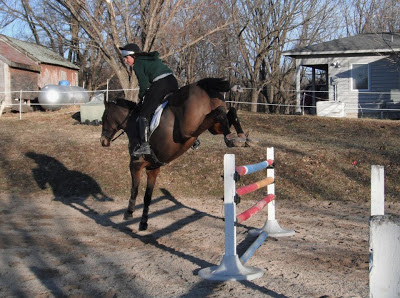 He had a good roll in the mud today on his day off, which always makes me happy to see :)
Posted by Checkmark115 at 5:45 PM 7 comments:
Email ThisBlogThis!Share to TwitterShare to FacebookShare to Pinterest

Quick update before these sleeping meds start to work, lolz.

I want to thank everyone for their encouraging and helpful comments! This is why we blog; for the support of everyone who knows what the ups and downs of horse ownership feels like. So what if we are online friends, we still have that relationship that makes us feel better when we're down, where we can get advice when we need it and where we can brag about our successes without feeling narcissistic. I love all 99 of you :)

I need you all to stand up for me. Ok, now sit back down.

And it was actually very good. I forced myself to get dressed in riding breeches, sports bra AND tall socks so I had ZERO excuses. I still tried to talk my way out of it. I even texted Jackie that I failed to ride today, even dressed the part. Then, as I was bringing pony in, I decided, "I DO want to ride today".

Decided to do soem dressage work in my favorite saddle, which happens to not be a dressage seat, but my jumping saddle. I just feel comfortable in it and I wanted to be happy today.

We kept to a lot of walking working on walk pirouettes, lateral work (sidepass and shoulder fore/in) and a few walk-canter transitions. We barely trotted, and the trot work we did do was long and low. I wanted to keep him relaxed, but marching. He obliged like a gentleman. Nothing like last Thursday.

I'm one of the oddballs that actually LOVES dressage and I was pleased with our 30 min. school today. A few of the Barn Ladies were complimenting Yankee and asking what my show plans for the year were, which was slightly depressing. BUT, they seemed apologetic and supportive nonetheless. I'm always floored when warmblood dressage owners love my little OTTB. :)

I've been thinking if I should ask for small sponsors. I don't even know how to go about that, but a lot of the ladies really do love Yankee & they seem to like me, and it could never hurt to ask? I don't know, I'm too proud/ bashful to ask for something as huge as that.  Who knows.

Anyways, going to bed satisfied with that ride and looking forward to gridwork with H and Pronto tomorrow :D

Thank again for your incredibly supportive and kind words!
Posted by Checkmark115 at 10:20 PM 2 comments:
Email ThisBlogThis!Share to TwitterShare to FacebookShare to Pinterest

This might be a little more than lackluster due my ridiculous fatigue and forgetfullness. I'm also craving chocolate and its making it hard concentrate. Even the word concentrate looks like chocolate.

This weekend I attended the joyous festivities that is the nations 2nd largest Mardi Gras celebration, only to New Orleans. It was interesting. I actually stayed sober since the rest of my group was a little less than conscious of where they were and I felt obligated to be the responsible one. Gosh, it is such a drag being the adult at a party. I did get to wear some bitchin pants though. Goodwill has some legit options.

At least the weekend was a slight pick-me-up from the desolate and depressing mood I've been in lately around the barn. All I do is work work work pick poop work fill water work sleep (barely) work cash checks work work work and I'm never any richer. I have no savings and there is absolutely no way I can show Yankee the way I want to. He has all the skills and more but there is nothing I can do about it and I feel like the last 7 years has just been a futile & delirious effort, thinking we could ever get to starred levels without having mommy and daddy pay for every little thing.

All I need is a real job to secure my finances, but there are none to be found. Looks like the college degree was a waste of time too.

I haven't ridden since last Thursday,  but that ride was productive at least-we jumped a little bit and he was a beast. I jacked it up to 3'6-3'9 and he took it like a pro, per usual. 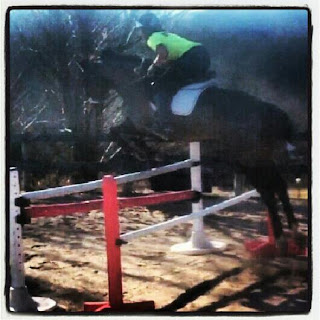 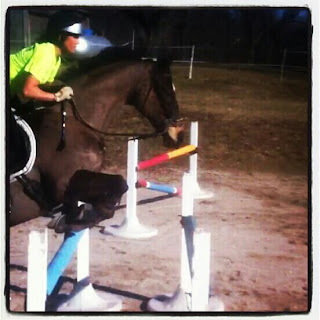 But lately I'm having a more than difficult time getting motivated to do any riding, especially with the jacked up weather fluctuations. Not sure if its the winter blues, or what but I keep making excuses not to ride. I spend most of my time daydreaming about all the shows I COULD go to this season and making up workout plans, exercises for Yanks, etc., but then I realize it will probably never happen for me & Yankee ever again. I just don't have the money.  We probably will never get to Prelim, or even 2*. I bought him to be my 4* horse and its probably the most depressing thing in the world to think that he will never get there with me.

I don't know if its because his legs have started to swell after every workout and while in a stall, how grumpy he is getting or whatever, but I have this insane feeling that one day he will just come up lame and never be sound again. To me, 10 is ANCIENT for an OTTB and I can't handle it.

I can never get out of this mindset for more than a few weeks, no matter if we have a few good rides or not. The effort is futile.

I get especially irritated with those who take all they have for granted. I'm never jealous, I just wish some people knew how freaking awesome they had it, instead of complaining about everything under the sun. What I would give to show my horse again.

Lord, what a ridiculous statement THAT is too! First world problems to the max. I realize I am lucky to have what I have and I do feel slightly accomplished at what I've achieved in the past. But my ENTIRE life I've spent devoting to eventing, hoping I could make it big; working off lessons, shows, bills. Always working. I never really had a backup plan and now that I've failed, I'm flailing and panicking.

That was a lot more depressing than I wanted it to be. I just wonder if I'm the only one here, grasping at strings, hoping that maybe just *one* day all my work will pay off. It sucks to think it was all for nothing.

Now that I've got that out of my system I should be good for a few more weeks. har har.
Posted by Checkmark115 at 8:09 PM 12 comments:
Email ThisBlogThis!Share to TwitterShare to FacebookShare to Pinterest
Newer Posts Older Posts Home
Subscribe to: Posts (Atom)