I am supremely jelly of you people who are eventing already or working with Becky Holder and shit :P

I already missed TWO schooling shows because of work so I'm getting anxiety about our first outing in less than two months time. Not only because of the missed schooling shows, but I will most likely miss our ONLY XC schooling opp as well. In addition, the first show of the year for us just so happens to be the ONE AND ONLY time I've ever fallen off Yankee, AND at a show. After 17 yrs of riding and 7 with Yankee, I couldn't believe I had never fallen at a show, but my one year anniversary is coming up and making it all the worse that we haven't schooled XC.

I'm trying my damndest to squeeze in some schooling sessions inbetween my 40-50 hrs of work a week. On top of that I've had this damn cold for over three weeks and I'm on the struggle bus to maintain energy throughout the day.

This week I had 2 dressage schools, a 2 mile gallop/hack and a jumping school. None of which were really great. The dressage sessions were dismal at best with Yanks flipping his face, hollowing his back, sidestepping/pacing, resisting contact and pretty much sucking in general. Frustrate. The hack was OK- I took Levi along and he had a grand ole' time galloping along with us. Yankee listened but was so crooked I felt like I was going to slide off his back. UGH. The jump school was pretty horrendous, in that horse charged the fences, bucked afterwards and never got his leads. Not a great start to our "spring training".

I give up for this week.

I blame it on the wonky weather. One day it will be 75 and the next 30 degrees. I can't believe I'm saying this, but I just want summer to be here so the temps will at least REMAIN at a constant blister.

Perhaps next will will be better. Here's to hoping.

Posted by Checkmark115 at 9:08 AM 5 comments:
Email ThisBlogThis!Share to TwitterShare to FacebookShare to Pinterest

OR anyone with event horses that pull on XC.

I've been debating for a year or so what I should switch Yankee to since he outgrew his horrendous out of control baby phase and only now needs a little more "HEY THERE".

Before anyone else says Pelham, I've tried it and the curb chain is too much. Weird considering his hackamore has a curb, but its also not in his chin groove and its leather. For some reason it doesn't bother him, but when attached to a bit he literally can't handle it.

The Meyler combo was a little too much as well with the curb AND three rings AND noseband PLUS its ridiculously expensive.

I've narrowed it down to two options but have zero experience with either tool and am calling out to anyone who has use one of either or has advice. I feel these are a nice alternative to curb chain and uses just a little extra nose pressure in addition to a plain snaffle.

First up, the Kinton (in red)

From what I can deduce it uses the pressure you put on the bit and transfers it to the nose. I like this option better but its the one I CANNOT find on eBay and as a cheap tack ho', I kind of was hoping it'd be there. 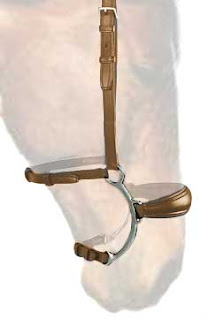 This is everywhere on eBay and for about $15-$60, thats not bad. What I dont like it the leather piece right in the chin groove. PLUS, I have no idea how it works. It seems like a fancy figure 8-whenever the horse resists, it uses the horses' jaw against itself and puts pressure on the three straps.

But, I dislike flashs of any kind. I used to use them, but I learned you cannot MAKE a horse accept the bit and if they open their mouth to resist, you must be doing something wrong. I don't like the thought of strapping their mouth closed and ever since I took Yankee's flash off his dressage bridle its been a huge difference. Granted I still have a  figure 8 on his XC bridle, BUT I keep it hella loose. I'm just too poor to get a new noseband. I feel if its loose its fine and their is no need to buy a new one. HOWEVER, I need a whole new bit anyways so with either of these purchases it will be bye-bye figure 8.

Please help! I honestly don't know anything about either of these pieces of tack.

Posted by Checkmark115 at 3:58 PM 11 comments:
Email ThisBlogThis!Share to TwitterShare to FacebookShare to Pinterest

Found a sweet new shop on FB. A few of you  might know about it already but I couldn't resist getting this adorable tee... 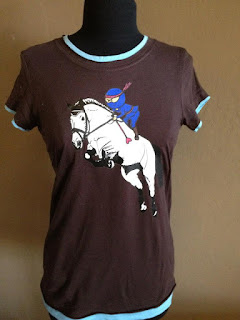 They have TONS of other adorable and witty stuff. Go to Facebook and search "Riding Ninja Apparel". VERY reasonable priced and the owner is super sweet!