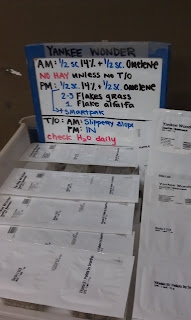 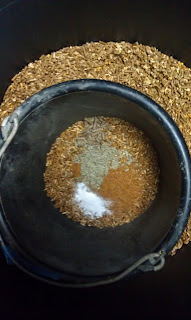 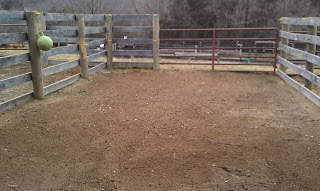 3) A clean run, raked to perfection, with Jolly ball. 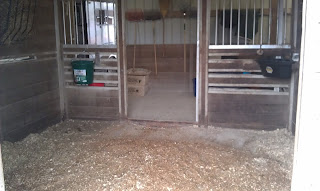 4) A clean stall with deeply bedded floors, clean water and fresh hay in the rack
I think it must be a horse person thing, but strating the day off with this just gives it a slice of perfection. If I were a horse, I'd be happy with the crisp, cool water in my bucket. Leafy hay in my manger. Nommy grains in my bucket (filled with horse 'roids...I mean, supps). And my Jolly ball in my run. Yeah, that is for sure what ponyface says in that brain of his.
I also am psycho and heart cleaning (thats why I clean houses for a living). Cleaning makes things perfect and you can SEE the results. Call me crazy.
Posted by Checkmark115 at 2:53 PM 5 comments:
Email ThisBlogThis!Share to TwitterShare to FacebookShare to Pinterest

This random video is in honor of my blog reaching 65 followers. Laughable to blogging tycoons like Catherine or Andrea, but to me, I LOVE and appreciate every one of you thinking I'm interesting enough to follow.
((If you don't see your blog on this side >>>>, shoot me a comment and I will visit your site! I literally heart reading all of your blogs and probably spend a good amount of my day checking to see if anyone updated theirs :P))
So I suppose for those new readers who aren't stalkers and don't have time to peruse through my previous posts, I figured I'd give a brief synopsis of Yankee's story, our plans for this year and whats been goin' on in our lives lately.
This, is Yankee, my OTTB ponyface. I've had him since he turned 4, right off the track. He is officially 10 now, which makes me sad. 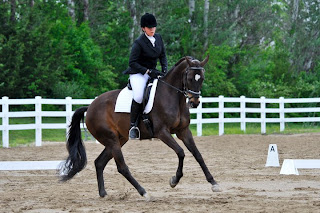 May 2011 Training level
When I first got him, he was a real d-bag. I wanted to send him back. But after some persistence and help of a few trainers and about 6 years later, thousands of dollars, sweat, blood and a few tears, he looks like that^ and win stuff like this... 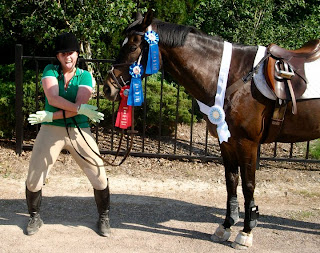 My sophomore year I moved from OH to MO and I severed my achilles tendon & fractured my tibia. I was out of comission for a year on crutches and whatnot and I leased Yankee you to a friend in Ohio. Even though she was competent, he forgot a lot of his training and got cranky and hateful towards a lot of things.
In May of 2010, I got back in the saddle and STUPIDLY thought that it would be smart to take him Training level after basically a year off showing. Yeah not so much... 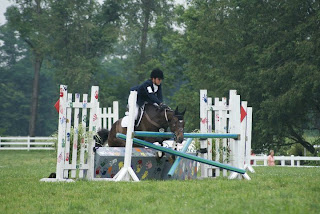 Along with slick footing and horrible riding, we crashed through this fence, shattering his confidence. No more showing that summer for us.
In October of 2010 I moved Yankee to CoMO. We were fortunate enought to board at Cheryl Holekamps barn (the owner of the Olympic stallion Windfall) and the facilities there were first class. Without them, Yankee would not be where he is today. I worked tirelessly for a year to get him jumping the way he used to with baby grids, lots of praise and fun hacks. Slowly and surely, he got back into beast mode and we destroyed the showjumper circuit in Missouri here this summer. 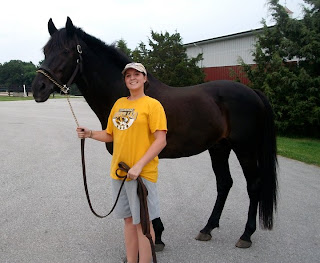 Windfall and I ( I was SO starstruck by this stallion. Never in a million years did I think I would meet this wonderful horse)
Before I get into that though, we travelled 500 miles in April to ride in Ohio's Equine Affaire 2011 with Daniel Stewart and ride in the breed demo's for the TB representing New Vocations Racehorse Adoption. OH BOY was that a trip. About 6 hours into the drive (around midnight) one of my trailer tires blew. I had no idea how to handle it, but thankfully my (ex)BF fixed it at a truck stop. Yankee was a star through the whole thing and basically just chilled out. The DS clinic was insightful and I really enjoyed his teaching style. Videos on Youtube. The breed demo was AWESOME; I felt like Yankee was the star of the show :) However, the OTHER 3 tires blew on my trailer as we were leaving and I had to buy a whole new set. Expensive mo-fo's! Apparently when we bought the trailer (from a trailer DEALER!), they had car tires, not the 8-ply trailer tires on them. Surprised they didn't blow sooner. So, that was an experience. 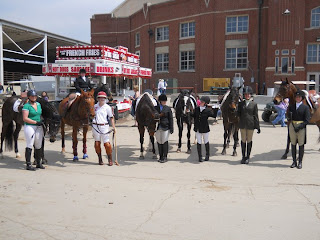 With the entire TB breed demo gang. Theres my fat-ass on the far left 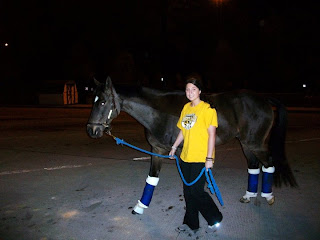 Yankee hangin out in a truck stop somewhere in Illinois
Due to lack of funds and training though, our 2011 eventing season was just...meh. We had brilliant moments, and horrible ones. The first outing in 2011 was a show in May in Kansas City, MO. It was 30 degrees and raining during our dressage test, but we got an amazing score and were in 3rd place! THIRD! That never happened to us, and I was stoked that my retarded TB could kick some WB ass in the dressage ring when the weather was so shitty. Then I promptly fell off on the 3rd XC fence and cracked my tailbone on the fence. OUCH. SO yeah, that was the major downer. The next outing was awesome and we were in 5th after dressage and XC, my my silly ass dropped us a rail and kept us in the ribbons at 8th. In Illinois we had the best dressage test to date with a 30 flat and I managed to stay alive during XC, but promptly passed out afterwards. It was a blistering 105 degrees and as you will find out, I do not do well in heat. Stadium got rained out and we left (after getting our trailer dragged out of the mud with a tractor) with a 4th place :) 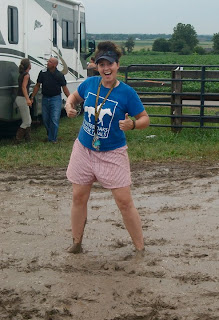 I will not mention the DRAMA that was me getting fired, kicked out of my barn and told to find a new barn in 24 hours while I was NOT IN THE STATE. That was funsies! Illinois was our last recognized event just as we were getting in the groove of things, but I did do the Ridgefield jumper shows in the fall.
In addition, I did 4 hunter shows in STL with my good friend Tracy. I despise the hunter ring, but these were pretty fun and it gave me some time to have a ball with Tracy. We also won a few of these... 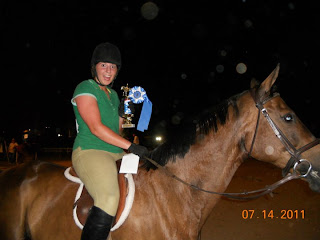 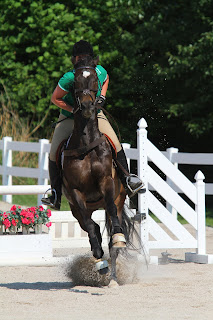 Ridgefield Jumper Derby
Which brings us to present day-ish. In the fall of 2011, lots of shit went down and my life was a cluster fudge. My live-in BF of almost 2 years dumped me, I totalled my car, moved AGAIN, lost a lot of money, my dog died and quit my horrible job of 3 years, to name a few. On top of all that, my classwork was killing me and poor ponyface barely got ridden. Here and there I dabbled, but nothing really exciting happened till this winter break (2012)  when I had a month off, scored a sweet job and got a fantastic new BF and dyed my hair. LIFE CHANGE! 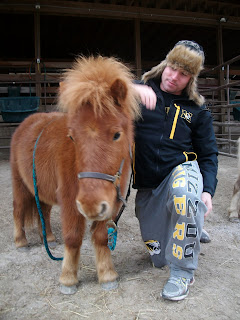 This is new BF with my 4yo mini pony, Zephyr. She makes an appearance now and again. BF loves the ponies, which makes him even more awesome :)
We worked really hard over break in dressage and did a bit of jumping and Yankee seems better off now. I still knew though that with 5 classes (working towards graduation in May) 2 jobs (to pay for the dang horse), and future job searching, I wouldn't have enough time to really ride and compete him this year. SO, I sent out an add for a half-lease on Equine.com. I was BLOWN away when I got over 100 emails the first week. I was prepared to send him south when a girl here in CoMO expressed interest. I loved her instantly and thats where we are today!
I hope that caught all you new readers up and possibly refreshed the memories of long-time followers. Like I said, feel free to drop me a comment if you don't see your blog on my blog-roll!
Also, if any of you have tips on how to get rid of nasty tail fungus, that'd be sweet. Yankee has a mighty gross infestation of the funk and I am terrified all of his tail hair will fall out. His beautiful tail has already cut its fantastical-ness in half (half of his tail has fallen out already) and I might cry if it keeps going.
Happy hump day.
Posted by Checkmark115 at 11:28 AM 11 comments:
Email ThisBlogThis!Share to TwitterShare to FacebookShare to Pinterest
Newer Posts Older Posts Home
Subscribe to: Posts (Atom)