The Gods Adore Me

After bitching for an entire post, my fortunes changed and the Verizon gods bestowed upon me an iphone 6 two weeks early. I almost cried with joy.

I honestly think I deserve a medal or an award, or an adult beverage, or at the very least a fucking cookie for enduring that nonsense. Never again. Thank you EDGE plan and Verizon.

That being said, you know what that means...pictures!

The camera in this 6 is pretty bangin, but thanks to my inability to set it out of direct light of the sun, the quality wasn't great. Regular photos were pretty stunner though, and they made B look fly as fuck. I'm more than a little excited.

At Rolex I obtained some pretty awesome deals, and now finally have pics to prove it! I've ridden in the tack 3 times now, &  I think I'm beginning to become obsessed with Stubben. The quality is amazing and I honestly really like the orangeish look. The breastplate is also so fugly its sexual.

I also peruse Ebay constantly at work and found a super super expensive bit I've always wanted to try for less than $20. I obviously bought it.

One of these days I will buy the PS of Sweden jumper bridle and it will all match. Tack whoring at its finest.

I'm still on the fence about the bit. Bacardi has always seemed to not quite like bits in general and always tosses his head at initial contact. Today seemed a little less than usual, but he was also fussy. Good, but fussy.

Considering this is our third "first day back" after winter/extended time off, I gave him the benefit of knowing he is VERY out of shape and slightly weak behind. He also hasn't shed out all the way and worked up a good sweat in less than 15 minutes. Can't blame him, it was almost 90 today (in May...what is going on!)

I started off with shoulder -in exercises and trying to have soft, following hands. He really likes being put to work right away. If we waffle about, I notice B works himself up, whereas if I give him "a job" he gets right to it. Handy.

Once We loosened up, I kept it simple. Trot circles, trying to maintain proper bend and cadence, with forward energy. Seems simple, but he was all over the place wiggly. Again, because fatty and out of shape, so I maintained even contact and kept my aids supportive & let him figure it out

B was  obviously a little downhill, behind the vertical and a little rushy in places at first. But I concentrated on keeping my aids steady and asking him to work into the contact properly.

After 5 minutes each way, he really settled nicely and maintained a semi-steady tempo and rhythm without too much loss of balance. Doesn't help that my lawn is extremely bumpy and wonky, but I considered it an extra challenge ;)

I wanted to try the canter, even though I knew it would be a mess, simply because I miss it. All those winter hacks, there was no cantering. Goals today were no popping shoulders and minimal head tossing. I knew contact and carriage was a little out of the question with him being so weak, but I just wanted the basics.

I like that even though hes a bit weak, he still really steps under himself and listens to my aids when I ask him to move the shoulders.


Bacardi was a little more wild to the left and I had to administer some pretty strong outside aids to keep him on a circle that resembled a circle. I could really feel the weakness to the left & here is where I encountered some protesting. 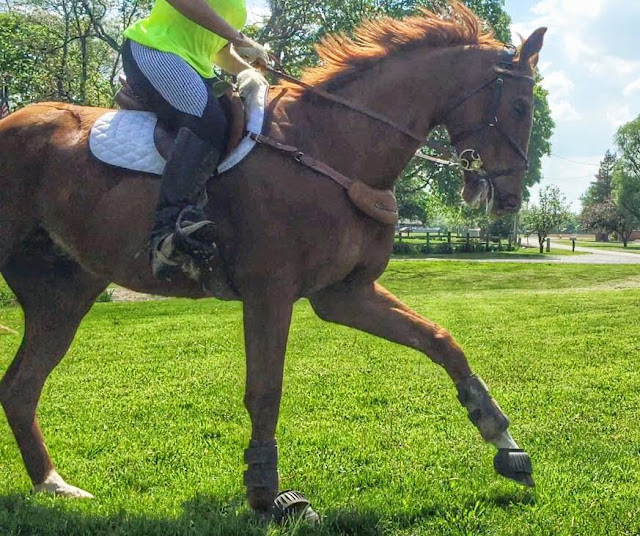 Overall, a good ride. I'm not sure how well that BoT headband is really working, but both times I've ridden with it, he's resembles an actual horse instead of a complete idiot. It also is not hot outside, so who really knows. I guess the horse gods have bestowed their mercy on me finally.

Always more to work on. Especially now that most people have 2-3 shows under their belt and I'm not even close..but hey. Whatever, better late than never.

I leave you again, with good thoughts and an adorable picture of the Levi dog. 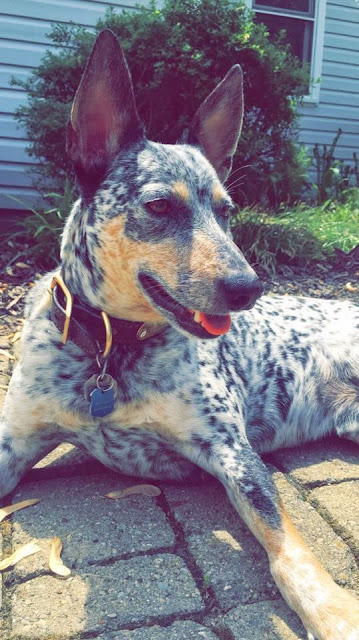 Posted by Checkmark115 at 8:21 PM 5 comments:
Email ThisBlogThis!Share to TwitterShare to FacebookShare to Pinterest

I've been told sometimes I'm a little too dramatic.

But friends, this is serious shit.

I thought I had a hold on life happenings. I really did. I acquired a real person job, I starting saving my money, I became single, joined a gym, I sent Yankee to a show home and I began riding a little more. Albeit, a crazy horse, but it was happening...a little.

But I fell off the wagon recently.

Apparently I cannot function without a phone.

I am not ashamed to admit that I fall loosely under the category of a "millennial" and apparently cannot human without a tiny, square, technological device near me at all times.

I was never one to be attached at the eyeballs, but "to the hip" is an appropriate statement.

And now I has none, and my life is in shambles.

What is Facebook? How do I snapchat? Is Instagram a thing? How do I know if people are alive? How do I take pictures of things. HOW DO I WAKE UP ON TIME.

Its like I've completely fallen off the face of the earth. No one knows how to reach me, and I cannot reach anyone else. I feel so alone.

Is anyone else out there? Do people exist outside of the internet and social media? I'm convinced that they do not.

So I literally do not know what ANYONE has been up to for the last two weeks. I can confidently say that I've visited Facebook twice on my PC, and not read one blog, nor blogged myself. I miss Instagram something fierce. I miss all the ponies. Everyone's ponies. Snapchat was my tie to Yankee, and I dont have that either and I feel like I'm dying inside. I did everything off the phone...everything.

Apparently you CAN be addicted to an app, I've discovered.

Drama aside, really though, you try it. I bet you can't. Everyone's all like "yeah not having a phone would be nice and going unplugged for a while would be chill" but you can always pick up your phone after a few hours away from the world.

Friends, do not drop your phone on a pond. Or any other body of moisture.

11 more days and I can person again.

Also, I do really own a horse, a swear. And I do ride.

The equines are doing wonderful actually; blooming, if you will. They adore their turnout in the grassy fields and B will gallop around at minimum, 5 minutes each time I turnout. Fat and happy beasts.

I have not ridden once though (big surprise) since my last fabulous ride 2 weeks ago (which I have yet to blog about) due to an unfortunate bout with a mild case of rhabdo, in addition to having come down with a cold after Rolex..


It also appears I have 87% immersed into the Crossfit cult and I literally destroyed my arms doing a hero WOD (for those non-CFers, that woudl be a stupid hard workout that no one should ever attempt ever because so hard).

I knew it was too much for me, but the competitive edge came out and I worked until I couldn't anymore. I also wasn't last to finish, go me. In return, I got T-rex arms and couldn't do shit with them for over a week. I still feel like I just stepped out of a rough workout, so note to self, quit when you know you should or you will be half paralyzed for quite some time.

Hopefully, one day soon I will return to the side of the living, but until then, enjoy this picture of Levi being precious. 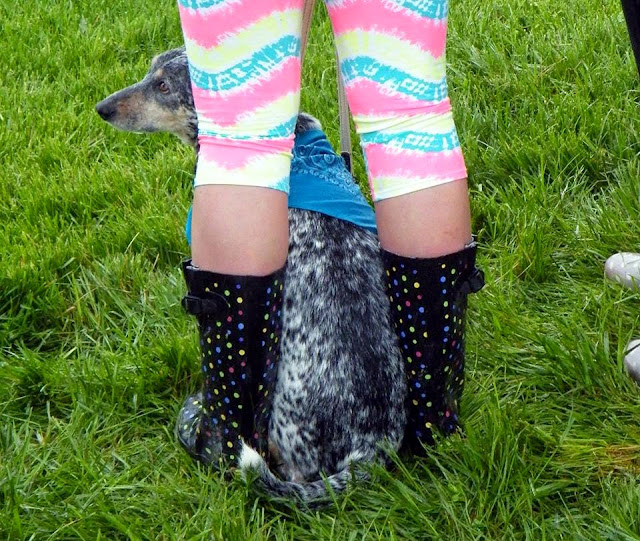 **let it be known I am well aware there are worse things to happen. The struggle bus is real though and I am the captain