I said I would discuss my last ride with B, and here I am, almost a week after it occurred, in typical late Monica fashion.

I also was putting it off a bit because I really hate admitting defeat or struggle. We will get to that in minute.

First off I would like to virtually bitch slap blogger for never getting its shit together with my old layout. Its settings are all wonky and some of my widgets are all screwed. In addition, and most importantly, I can make my pictures extra big. And thats like, imperative. Because pictures.

Especially ones like this that I just really like looking at. Levi tails crack me up. And B is really starting to look nice. And FAT.


He's been a little beast under saddle as of late. I have yet to have a truly terrible ride on him. I know I've said this over and over, but he truly impresses me with his work ethic for such a young lad. The big little man tries so damn hard for me and never gives me any real attitude, ever.

Any flack I get from him is just from a lack in training. I have to remember that he's only five, and not a grown ass adult horse. Its just so hard when your baby is so fucking quiet.... and does literally perfect flying changes (no I mean literally perfect. Go stalk my FB page for the video. Youtube was also on its period and refused to let me share it).


I suppose some horses have more of a propensity for changes because poor Yankee is almost 14 (sobs a little) and STILL loses his effing mind over changes. I truly wonder if he will ever be able to do them with any kind of composure. I'll take 1/2 horses doing changes though.

Our only internal struggle with each other seems to be jumping.

I havent had any truly difficult hardships since I was a wee child when it comes to jumping. I've had a decent form, OK skill and until recently, no fear. But god bless it, I cannot seem to ride my dear baby horses' jump to save my life. And he cant seem to jump even the smallest of fences like a normal horsebeast.

For the first couple fences, everytime, he does this weird rock back dealio and LAUNCHES over it liek it might eat him for dinner. Every. Time. He also refuses the first time I ever present him to a fence. Not good.

And I go flying. Every. Time.

I try my best to not jab him in the face, and usually do OK with that. His old owner told me he likes loose contact to the fence and that seems to hold true. Hope I can rule out fear of face jabbing. I'm wondering if he's scared. But then later ATTACKS the fences. So ruling that out. Doe she hurt elsewhere? Doesnt seem to be. Or is he just green? Most likely.

Hes MY horse. I should be able to fucking ride him.

Granted, I've jumped him 4 times, and all over crossrails. But STILL.

At a loss over what to do with this one. Why does he jump so awkwardly at first (and mostly in general)? Why cant I ride him? Questions questions.

I gave up over crossrails and set up a baby oxer to see if he would be a little more round and not...squatty. I also pushed him to the fence. He has a tendency to sputter out before, like hes a little unsure of himself an his legs. As you will see though, after a couple fails, he really gets into the groove. 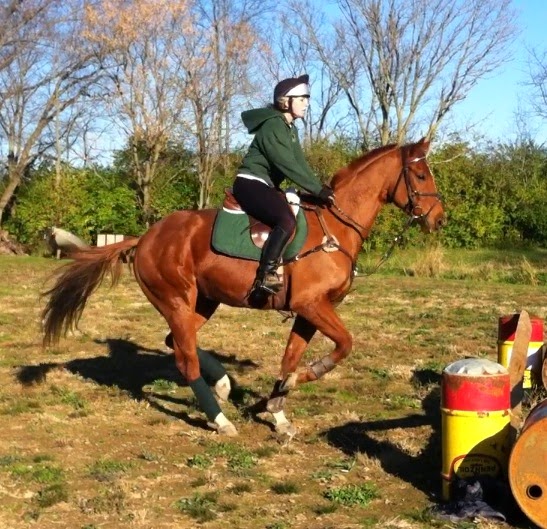 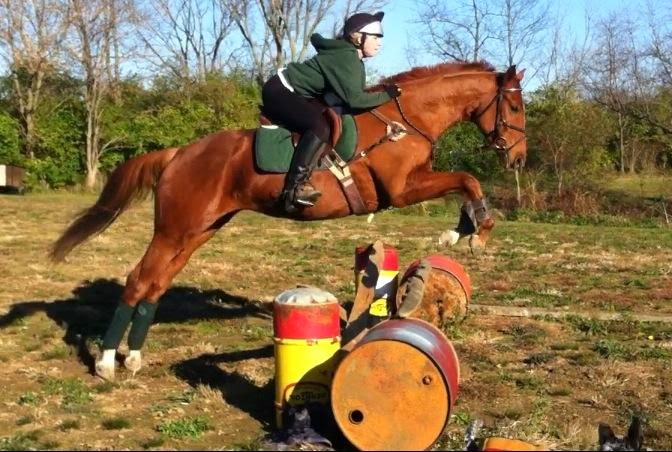 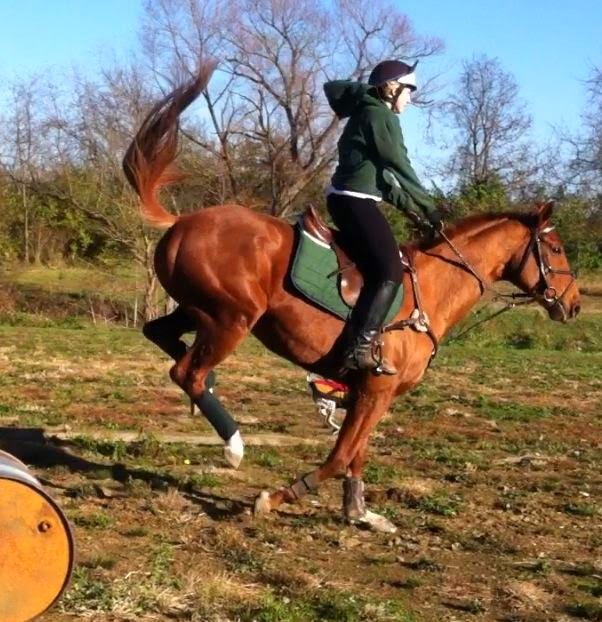 I guess its just hard to accept that I need to work on rudimentary skills when you're used to scaling 5ft fences with superbeast Yankee and rocking out XC courses.

So what do you guys do when youre feeling a little discouraged? Any suggestions for his wacky jump style or what else I could do to keep my butt in the saddle?

Posted by Checkmark115 at 9:11 PM 11 comments:
Email ThisBlogThis!Share to TwitterShare to FacebookShare to Pinterest

Thats how long its been since I've ridden this dreadfully handsome horsebeast. 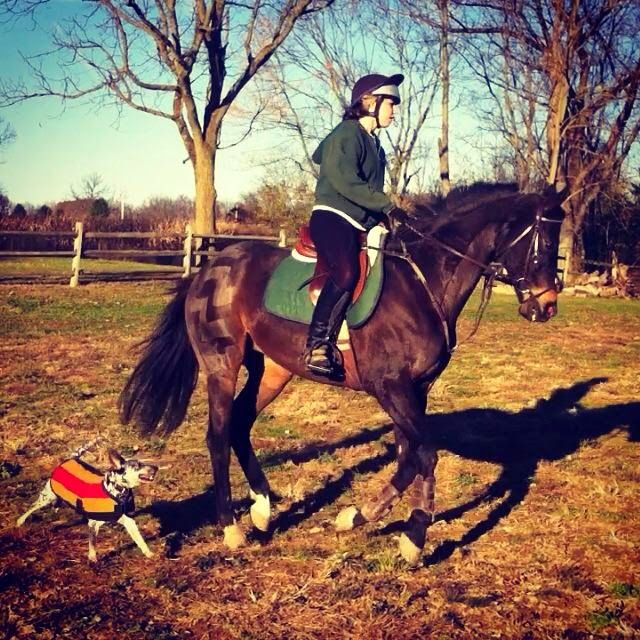 Rather dashing, for a mud buffalo disguised as an eventing horse. And can we also please notice how dapper levi looks in dog clothes?

Yankee's time off culminated from the lack of organization in my life, hectic schedule and minor injuries to Yankee feets.

To recap; we had that whole debacle with the first farrier I tried when we moved back to OH. Not only could the farrier not keep shoes on, but he charged for it everytime he had to come out to put them back (not customary in my experience). Yankee ripped his shoes off 10 times in the span of 3 months, 7 of them I believe on the RF. As you can imagine, the RF was shredded. Then, we pulled the shoes in an attempt to save what little hoof wall we had- wrong choice, and he got a mega stone bruise. New farrier set beautiful shoes on him (they stayed by the way, in all the mud and weather fuckery) and I continued to give his fat self time off.

He was feeling fresh and perfect when I tacked him up Sunday for the first time in SEVEN weeks. Thank God for Bacardi or I wouldve gone insane.

Luckily, I still got to play with him while he was on his vaca getting fat and shaggy- in what little "spare" time I had. In a lackluster attempt to de-shag him a I attempted to clip him in some cool and fashionable way.

Unfortunately for the boys, my clippers shit out mid clips, so Yankee is stuck with this and poor B looks so so sad half fully body clipped. Luckily for Yanks, I was smart and did ass first, then front trace. I wanted to get a trace done on B too that night, but then got clipper happy and kept rolling right along until *bzzzzzzz-shhiiiitttt*.

NEVR BREAK THE CARDINAL RULE OF CLIPPING: do not clip one full side, then the next. Always match sides evenly and clip a pattern that will look good if clippers shit out. I knew this and still disobeyed and now my baby looks ridiculous.

Yankee was wonderful. Not an ounce of stiffness or lack of energy in his body. He wanted to go go go

Not much else to report on that ride...fatty magoo got tired after 5 minutes (literally) and I didn't wan to overwork the poor guy.

I also rode B, but thats for another post. Just wanted to share my majestic steed and all his wonderful ass glory. 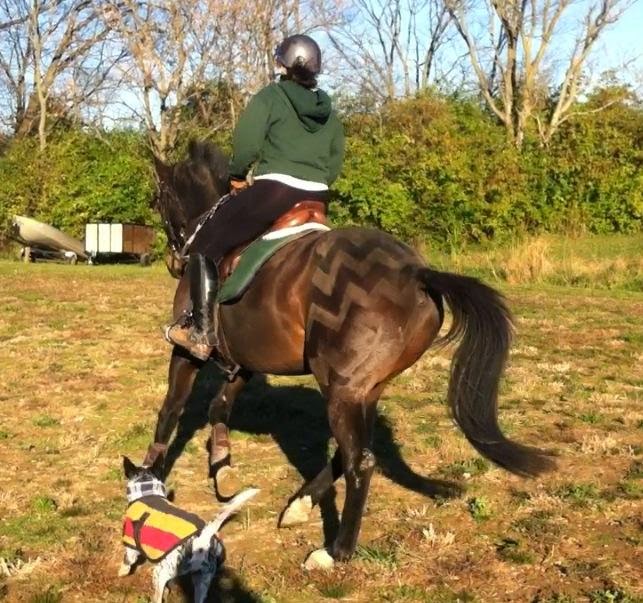