Sitting here rocking out to 3OH!3, not really sure what to post or discuss since I'm basically the lamest mother-effer on the planet compared to others on here. Ya'll are putting me to shame.

Since I has no monies I suppose I won't be doing any more shows this fall, unless I can scrap up something by the 22nd, but I don't see that happening.

I also was SUPPOSED to go to the AEC's to groom for Stacey and another friend, but not only do I not have gas $$ for that drive, but work blacked out that weekend months ago because of football games and I couldn't RO even if I wanted to. GAH. HATE.

Lets see, been doing some of this... 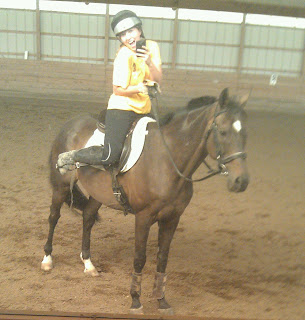 Gave him a mohawk, which I think looks pretty fly. Also note how very fat he is...yes, thats a good thing.  He is also shiny but filthy indoor mirrors cloak that a bit.

Slowly and steadly working on getting that topline back. Luckily his transitions are still perfect and he's doing a stellar job reaching forward and down in all 3 gaits. I have problems not asking for too much, forgetting he's out of shape a bit. Been jumping a little too, but nothing serious since we have nothing to work towards.

Sorry I've been slacking on posts, but our rides/lives are uninteresting and with no Jackie to snap pics, I HATE blogging without them.

Also, I really hate...like, LOATHE being outside when its hot and muggy. It was 80s for a week and I got all the things done. I was the responsibility champ! But then it got hot again and I'm like 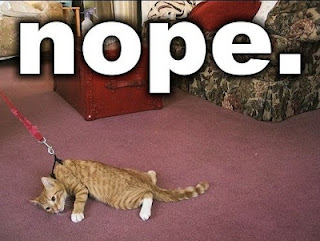 
On a different note, I don't know what the drought situation is like for all ya'll, but hay here is RIDICULOUS. I didn't realize it till I started hunting again ( I have about 15 bales left). Luckily I'm only buying hay for one horse and I spent $90 on 45 bales (which IS record cheap) in May, which has lasted me a long time with the grass we DID have.

Now though since we've had like and inch of rain this summer total (record that stood since like 1970) and the ground looks like Texas and everywhere is crunchy, hay is at $11/bale AVERAGE.

Yes, yes, I know, some of you pay this on a regular basis, so I shouldn't bitch, blah blah blah. BUT this is why I don't live in places where hay is that expensive. I absolutely cannot afford it. NORMALLY summers here are not this bad and we have plenty of hay to get us through winter.

So that means if I were to get the shittiest hay possible in the area (a lot of places are selling at $6-which is still high, but its like 5 hours away) it'd still be like $8/bale meaning I would have to get AT LEAST 40 bales...thats $320....THREE HUNNIT TWENTY for Christs sake!! I spent $90 last time!!!! And that 40 won't even last me through fall since there is no more grass..

Excuse me while I go die now.