So I wanted to post pics from yesterdays jump schooling, but I will do that tomorrow, too busy right now.

I did want to discuss something real quick though.

After visiting EN this morning and viewing all the 'pretty' new XC fences I was actually really dissapointed. Not with just the fences but with eventing in general.

The XC phase especially was over NATURAL fences. Stuff you would find in the open. Logs, brushs, ditches, etc.

Nowadays (I realize with safety issues it is not a good idea to jump solid barbed wire fencing or gallop across hard ground) we are supposed to jump freakin' MANATEES?? AND SQUIRRELLS AND DUCKS AND ARMADILLOS?! WTF! These are not NATURAL and definitely not something you would find out in the open. Ridiculous!

I realize the sport has evolved, and that is good for the sport, but does anyone else find that the new fences are outrageously ridiculous? WHY do they deem them necessary? To test horses and riders further? To prevent boredom from jumping actually natural like fences like ditches, tables, rails, etc?

Like I think it is really cool to jump a wagon, or hay bales, RR ties, tables, rails, ditch's, water complex's..but freaking MANATEES???????

le sigh.
Posted by Checkmark115 at 11:17 AM 4 comments:
Email ThisBlogThis!Share to TwitterShare to FacebookShare to Pinterest


Is this not the funniest freakin' pony? He just knows how to dump his riders and then stops. Bad boy. If you wanna see him being good, go here.

My new tack buying obsessed self was super excited to get my new lunge line and martingale in the mail... ALONG WITH MY TAX RETURN!!! Makes me so happy I could poop rainbows and cupcakes. 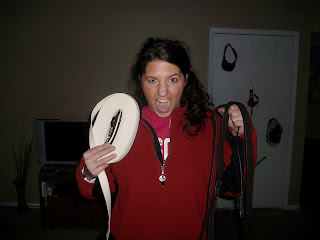 Slightly possessed with rage of obsession One of my eyes is actually red.... 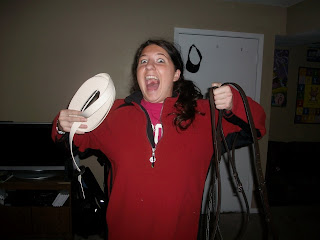 aaaaaaand here is my happy face. 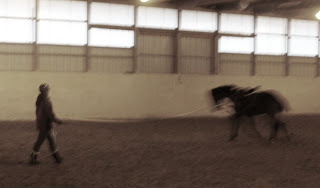 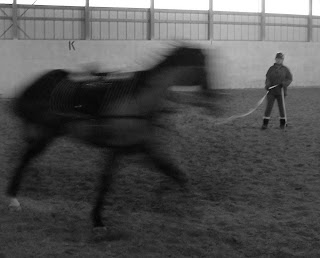 the new lunge line in action today. It works. In case you were wondering.

Yankee was brilliant today after not being ridden for 6 days. I have video but you all have seen sidepassing so many times you might die of snoredom. Take my word for it :)

In other news, H is asking me to ride Pronto for a few days while she is gone. I am pretty excited! He is a massive dressage horsey and really brilliant. I feel privileged that she asked me!

Also, an update. I will definitely be skipping class for the Reese Koffler clinic if she wants me. I was insane to even think twice about it.

In other other news, try not to miss me to much this week. I don't know if I will be able to post next with a paper, two exams, 3 paintings and other randoms long ass assignments due within the next week. Jump day tommorrow. OH, here is the link for my last jump day (3/3/11) video. I never got around to posting it...

Have a splendiferous evening horse peoples.
Posted by Checkmark115 at 6:34 PM 6 comments:
Email ThisBlogThis!Share to TwitterShare to FacebookShare to Pinterest

So many things to discussssssss!!

First, we have reached 30 followers! OMG we are famous!!! Ha, not really (compared to like, Denali or Gogo) but I thank you all for being interested in what I have to say and giving us many compliments. Ponyface thanks you :)

Thirdly, I have discovered my brave little fart face's only fear. Rain drops. Yeah WTF right? Last night I was running on 3 hours of sleep and felt like a zombie so I figured riding would be not such a good idea and would be about as productive as watching grass grow. I just got MY BRAND NEW LUNGE LINE (WOOT) and decided to put it to use. I was all ready for a nice relaxing lunge sesh, since he hadn't been ridden in like a bagillion days, but what I got was a snorty, fire breathing, high trotting, head in the rafters pony from hell. THAT was unexpected. 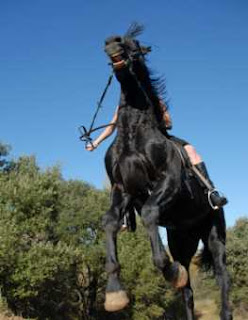 Took me a minute to figure out what the hell is problemo was, since he is literally afraid of nothing (pretty sure I am afraid of more things...needles, the dark, thunderstorms, college, failure, etc). At first I thought it was his shadow on the wall since it was dark out, but it was the raindrops from the roof hitting the side of the arena. I guess at night raindrops sound like something you might find in your closet, as he was certain the wall was going to eat him for dinner.

He just would not settle, bolting all around actin' a fool. I always give him 2 "grace moments", meaning he gets, two bolts, two bucks, two times not getting the transition right away, and then after that, it is unacceptable. He spooked and twice and that was the end of that. I am a FIRM believer in ask, tell, make. The asking was his two bolts. I asked nicely to calm down and he did not listen. Tell was me giving a jerk on the line and stepping in front of his shoulder (usually the shoulder step makes him stop immediately). MAKE, was me majorly jerking on his face and releasing pressure AS SOON AS he gives. I did this for about 20 min. and he eventually got the idea that spooking was a no-no and relaxing like a good brave event horse was good. I was very happy to end the workout with him chewing the bit, accepting it and trotting/cantering in a very relaxed manner.

Fourthly and fifthly, I have been asked to be a demo rider for Cheryl's ICP clinic with Brian Sabo. WOOT! Hopefully lots of fancy rfamous peoples will be there to see me and my awesomeness. Ha, well really I di hope there will be important people there. I am always looking for ways to network more! Also, the Equine Affaire coordinator emailed ME, asking if I want to ride in the Reese Koffler Stanfield clinic. UM...YES! It is a dressage clinic about relaxing the event horse in the dressage arena. I love E.A. :) Only problem is that if I do that, I will have to miss TWO days of class, and I am not really comfortable with that :( College is kickin' my ass and two whole days would not be good. All my profs are super nice though (exception, my spanish prof) so they will prolly give me leeway.

Anyways, that was an exceptionally long post. Sorry, hope I didn't bore ya'll, I usually put in more pics...I am a picture person. My brain wanders if I have to read more than like 3 paragraphs, haha. Squirrel.

Posted by Checkmark115 at 8:23 AM 16 comments:
Email ThisBlogThis!Share to TwitterShare to FacebookShare to Pinterest 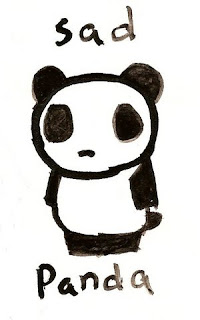 I was a little sad.

I didn't ride all weekend because I am a lazy person who worked waaaay too hard this past week and thought my horse needed 3 days off (counting today since I work till midnight) but now I feel guilty and am a sad panda.

I also am a little fearful for my life as this is a brand new week with with ALL NEW opportunities for professors to rape us with a load of dogcrap for homework.

It is also supposed to thunderstorm 3 days this week. EEEEEK :O

But I did find out that I won a bidding war and got these shipping boots (well, ones that look similar)..... 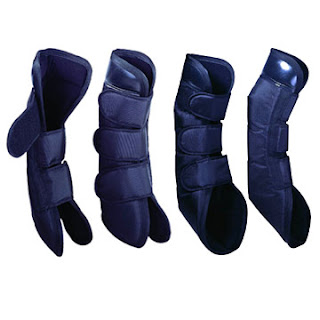 For $2.75 on ebay, free shippping. Um, WIN! My mom lost my super extra beautiful BLUE tall shipping boots that cost me an arm and a leg so I am mega joyful that I got these for SO cheap. Non believers, Ebay is the shiznit. I literally buy everything off there; breeches, boots, saddlepads, AND I just got a gorgeous new running martingale for $25, retail $150. HAHAHA RETAILERS I WIN! The old running martingale was all crusty and old. Can't compete with that now can I? My tack whoring self (yes, I am a whore of many things. Like, pillows. And comments. And movies) could not say no to such a deal.

I also found out that I am getting promoted to "Certified Trainer" at work meaning I will be like a manager, but not have to work the hours AND get a substantial raise that will make it actually worth going to work... HAHAHA ANOTHER WIN.

So do you guys know Allie over at Hyperbole and A Half? She probably kept me entertained for at least a solid 7 hours this weekend. I think I read all her posts. I would visit her blog, she is epically hilarious. She reminds me of how I was like in High School. Not that hyper anymore but our humor is similar.

AND since it is a new week, that means more chances to ride my beautiful ponyface. I have missed it this weekend but hopefully he enjoyed his downtime.

Also I got SIX comments on my last post :D