What Do Wednesday: Trailering

The update on B is depressing AF and consists of possible weeks on stall rest, packing with magic cushion and lameness. Literally what the fuck. I have NEVER in 18 years had a horse go this lame or be this problematic all of a sudden, with shoes. Farrier came out yesterday and said he was too sore and had no foot to attach a shoe to...which I suspected. And now I am le sad.

Moving on from that bullshit, my question this week was spurred by a conversation with a barn mate regarding trailering protection. Meaning, the discussion of "to wrap or not to wrap" when trailering.

I have the tendency to do more than less, which is not the norm around here. Most toss their horses in with just a halter and thats that, regardless of the length of trip.

However, I am paranoid, and have been in 2 trailering accidents (thankfully not horrible BUT could have been) so therefore I stress when trailering. Bacardi also is a special snowflake. While he flails less than he used to, he still occasionally kicks and or behaves badly. Therefore, I don't care if we are going 5 minutes down the road, they are essentially bubble wrapped.

If you've been with me long enough, you know that B's favorite thing is NOT trailering. He's made huge steps in getting over his fears and now will go in after about 5 minutes staring and thinking. The hardest part is getting him out when he's in my trailer. In Supertrainer's he can spin around and walk out, but mine is a straight load. Always something with him.


Regardless, I take several precautions now when trailering, especially with B. You never know what could happen in the trailer or, in an accident. I try to keep them as safe as possible, while also taking in to account comfort (weather, length of trip, etc) and safety.

For any short trailer ride, they get boots. I don't care what anyone else thinks, all it take sis one misstep, one kick or even an accident to shred some leg. I've seen it happen. They get boots. Always.

I prefer shipping boots, but summer can be a bit hot so on days that are 85+ they get bells and regular SMB boots all around.

If its a long distance, they get shipping wraps. When I brought Yankee home from MO, I used the equiflex sleeves under stable wraps and it worked beautifully. I recommend that set-up for horses whose legs swell up.

B DOES NOT tolerate wraps on his hind legs, ever, so he always gets just boots. I hate it, especially since he will kick on occasion, but he kicks more with wraps. Whomp whomp.

B also gets a super special shipping halter and shipping cap. I like to call it the dunce cap. I don't have a picture of it, but its a thick wool and leather cap that attaches to their halter and protects the poll.

This bitch WORKS. I swear it saved his life once.

Last spring? Remember when he ripped his face open to the bone? Yeah. He was halfway in the trailer and decided he didn't want to be in there anymore and reared (IN THE GODDAMN TRAILER) and fell out backwards, bashing his face on the way out. terrifying to say the least, but without the dance cap, I am sure he would've been dead.

So he gets that special halter every time.

I didn't pay $200 for a custom halter either. Took an old leather halter and added sheepskin tubes to it ($60/set on ETT) and BAM, shipping halter.

In addition, I ONLY ship in leather halters and lead ropes stay ON in transit. This has been handy in so.many.situations. I ship with two halters usually; one attached to the tie in the trailer, and the other with the lead line, untied. This way if the tied halter breaks, there is still one on the horse. Ask me how I learned this trick.

A lot of people scream "UNSAFE", but as long as the lead line is out of the way and looped/tied in a loose release knot, I see no issue with it.

I think of fires too, and in that situation, the lead  line is RIGHT there, no need to freak out and try and get one, attach it and get the horses out. SO many instances where this is handy, and has been handy for me.

Additionally, Yankee rubs his tail in the trailer. He sits back on the butt bar and cruises right along, effectively rubbing all the hair off. So he gets a tail wrap too.

I am always fascinated by everyone's answers, and I would really love to know what ya'll do when trailering! How do you wrap your horse? Do you? Do they wear a special hat like B? Tell me dear readers, what do??

Posted by Checkmark115 at 12:17 PM 25 comments:
Email ThisBlogThis!Share to TwitterShare to FacebookShare to Pinterest

Summer is For Showing

For ONCE I have an actual show schedule set up, the means to participate and I am stoked about it.. Granted, this is probably because none of them are USEA-money-sucks, but still shows nonetheless. (For real, how do people have the means of doing more than 3 a year... eat ramen constantly? Not pay insurance? Walk to work?)


Wow. That feels good to say actually. Eventing just isn't my jam anymore. It was for years, but its not anymore. Whew. Feels good to get it out. Feels good to accept that as reality instead of try and kid myself.

That being said...I wish my horse would be not lame...but alas, 4 days later he is still limping and pitiful and my feels are all fucked up. I don't know how to help him and I feel terrible. I don't know if turnout will help or keeping him in will help. I wish my farrier could get here earlier than a week, but thats now how things are panning out. So here he sits yet again, doing nothing after we made such progress last week with the foreboding task of fixing his actually ridiculously fucked up LF...

In other news, and the real reason I am posting, is to elaborate a little on Yankee's first show of the year with his leaser!


Dressage is not the easiest to make exciting, so if you lack attention span or know that most show go about the same then feel free to skim the pics and bask in Sir Shininess glory and move on. A quick summation of the day would be, hot, windy, but good. There is much to work on, but productive things happened. Yankee was his good ole self and seemed to enjoy himself. I SO wanted to take the reins and it was a difficult watching from the sidelines, to be honest, but I enjoyed it all the same.

Looking back, I am pretty sure I was the classic helicopter parent for this show and I feel a little bad that was "that overbearing horse mom" to my leaser. I braided him. Wrapped him. Loaded. Unloaded. Lunged. Tacked him up. Then handed him over.


Essentially I was a groom.

Not sure about anyone else but I am incredibly picky and particular when it comes to my horses and their tack. Sorry V, I am sorry! You are a saint for tolerating me, haha. 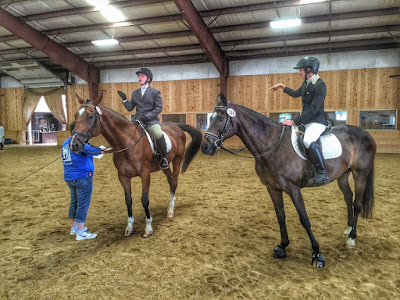 That being said, it was SO hard for me to not over-task V in warm-up and remind myself that they are still getting to know each other. It literally hurts my soul when Yankee takes advantage of her and flops around at the trot, but I grimace and let it go. V is literally one of the epitome of a perfect student. As a collegiate athlete she is incredibly body aware and is teachable. She listens and DOES what I ask her. She is promising rider and I am proud to have her riding my OG. 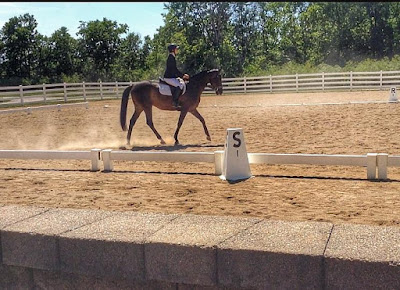 So the warm-up was productive and I was confident in their first test. yankee however, "lost his marbles" when  he entered the ring thanks to the dust bowl and the ring literally blowing around on the ground. I say that in " " because all it really entails is eyeballs and a sidestep, but tension is tension. 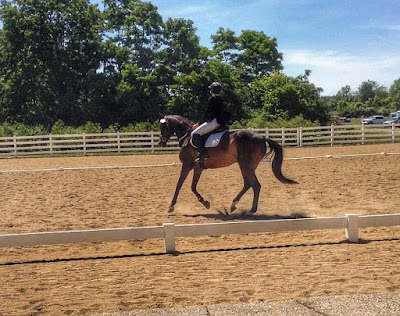 First test was...tense. Yanks was distracted and V I don't think knew all his tricks to get him back in the game. She handled the new horse she was riding quite well and the canter work was brilliant. The rest was....lackluster. He was all over the place and just not quite paying attention. Not his usual self, but I could understand with the wind, dust and ring falling apart around him. He handled it better than most horses did, to be honest.


He continued to be jazzed up right until the start of the second test though, and then he visibly relaxed into his work. Almost lazy. V could be more accurate, but she is new to dressage and that will come with practice and learning the horse. I will say the canter departures were incredibly well placed, accurate and fluid. A joy to watch. I personally thought the second test was better, but the judge had other ideas. Low 60s was enough to place and I couldn't be mad about that, first time out. 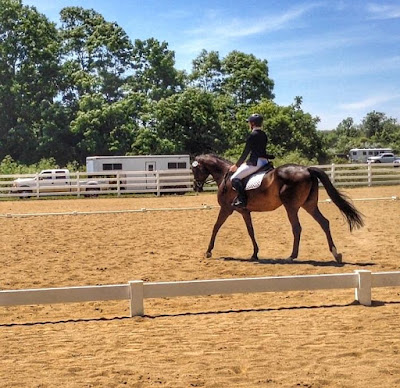 She was a fair judge and I feel they were scored according to the test that was ridden. V still has to learn how to ride him 100% through the contact and Yanks has to learn how to do that under her. They're a great pair together though, and even the judge commented on how wonderful they are together and how athletic Yankee was. So that was nice! I KNOW they are capable of scores in the 70s, not 60s...and we will get them there!

Overall incredibly proud of these two. V for learning so quickly and christening the partnership with satin, and Yanks for being the steady boy I know he always is. Soon we have XC schooling coming  up, a clinic and then their first event in July! 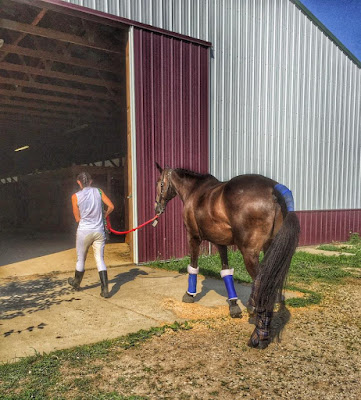