I first laid eyes on my heart horse when I was 13 years old (12 years ago), on our old dial up computer on a New Vocations website. My parents and I had talked hours earlier about POSSIBLY getting a bigger horse for me since I had outgrown Spirit. So of course, I had already found "the one".  I knew what I saw and he was special. I couldn't let him go...

Luckily for me, my mom fell in love too and a few days later he was mine. My dad didn't even know what hit him.

However, 3 months into owning him I wondered if I had made a mistake. This horse I had grown to love so dearly on the ground, was unpredictable and unrideable because of his track history.

Whatever made me think that a skinny 14 year old with no ex-racehorse experience could handle a 3year old off-the-track horse and turn him into a supurb eventer?

So, with the help of my friend and instructor we spent 6 months round penning and ground training him and on the 7th month I was able to finally ride him with light contact and minimal steering.

At times, I wanted to give up.

He did not pick up on anything very fast, because even though he was brilliant, he wasted his energy evading me and exploding at random moments. It was not uncommon for him to bust out in bucking fits whilst I clung on and tried to steer him from major obstacles.

Obviously, this horse would take time, and as an impatient teenager, I was frustrated. VERY.

Slowly but surely however, his quirkyness won me over, and with time, he began to truly trust me and open up and begin to learn.

He went from careening dangerously around arenas, to quietly making transitions. Bucking fits in the canter, to keeping calm and carrying on. Stiff in the neck, to loose and free. Crooked as a corkscrew, to straight as an arrow.

As the years have progressed, Yankee's ability to retain knowledge and learn new things from experience have continued to blow my mind. He has that 5th leg all eventers crave, and he saves my ass all the time. He thrives on XC, and galloping and jumping seem to be his niche. We used to struggle with our sanity in the dressage ring, but I attempt to make it fun, and slowly, he is working towards more advanced movements like in hand piaffe, counter canter, flying changes, shoulder fore and in, and leg yeilds and sidepasses. 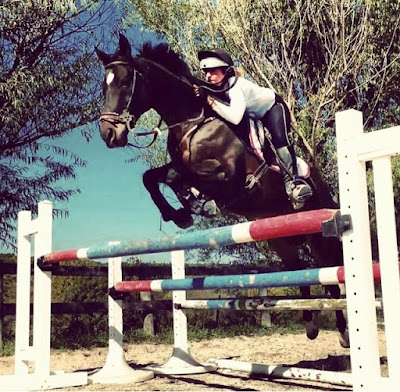 Our showing record had been....interesting. Due to funds and school schedules, I only hit about 2-3 recognized shows a year when I was in college (2009-2012)  and due to my innate ability to procrastinate, we usually show up unprepared. Yankee had anxiety issues in the ring, and nothing I did worked to chill him out. Our lowest dressage has been a 35 up to this point, but still not good enough to win that phase. Our issues in XC arose solely from my mistakes, naivety and feeling of invincibility.

I was intent on moving up the levels as fast as possible, skipping out on major fundamentals, and the universe let me know that it had different plans for us and that I was an idiot. I personally had some major injuries and recovering was slow.

Yankee was content to wait, and absorb  training with other riders and wait some more.

After that blip from riding, I learned to take steps back in our training, and reapplied basic concepts to the more advanced movements for TWO solid years on the flat and over jumps.

We hit some MAJOR milestones early 2014 after many many hours of correct schooling on the flat and over fences. Finally placed top 10 in an event at training level (two actually!). We nailed flying changes over fences, half-pass and many other mid-level dressage movements. We rocked over 5ft and we kicked ass at a jumper show and took grand champion! We also took some names at a dressage show and won the TIP award! Later that year too, our team clinched the Midwest First level USDF Champs and I was so proud to be a part of that! 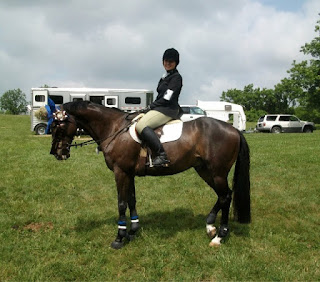 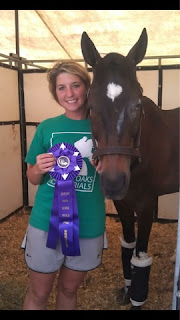 Then, I moved home to Ohio in May 2014 and took Yankee with me. I then also bought Bacardi. 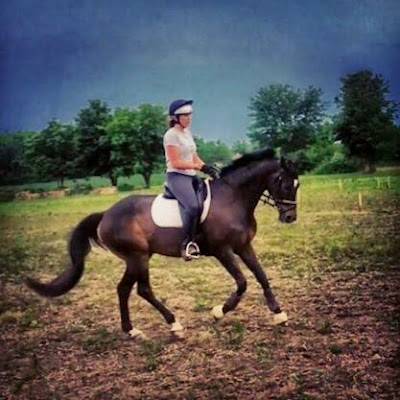 Mostly in summer 2014 we played around while I figured my life out. 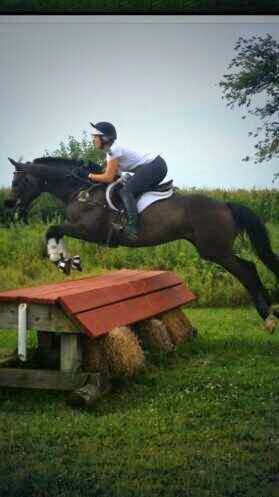 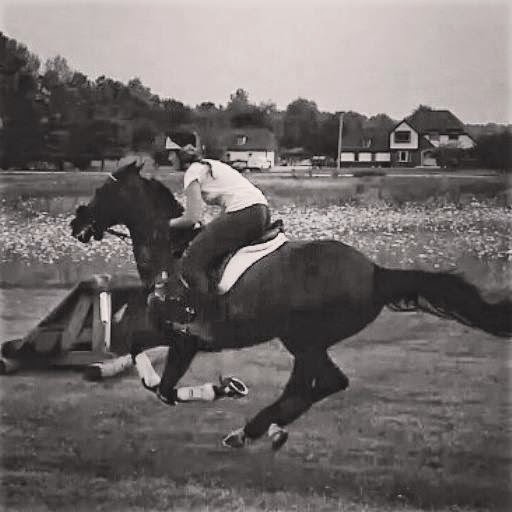 Then, I got injured again late summer, badly, by Bacardi with a swift kick to the thigh.

I made a super hard decision in November of 2014  (6 short months after bringing him home) to send him on a lease to Kansas with 2 badass eventing sisters. Read the post HERE.

They had him for about a year and did a lot of amazing things with him! 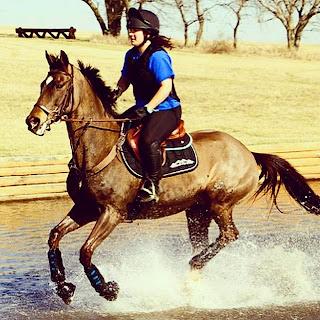 In October the lease ended and transferred to my lovely and wonderful best friend Jackie. She has many years experience with Yankee, having previously leased him and ridden him on occasion throughout the years. Jackie took it on herself to continue his training with goals of Prelim in their sites

Sadly, a few months into the lease Yankee colicked badly and required surgery and in February unbent the knife and was out for a few months.

It was literally one of the worst experiences of my life and I hope I never have to repeat it again.

Once he recovered enough to travel, he came home to Ohio and for a few months worked on recovering from surgery. He made massive progress and locked down a new leaser for the Summer 2016 season!

In May of 2016, Yankee was allowed to be ridden again on the flat. I worked on the lunge line 30 days previously in April to get some strength back and he was raring to go first day back. 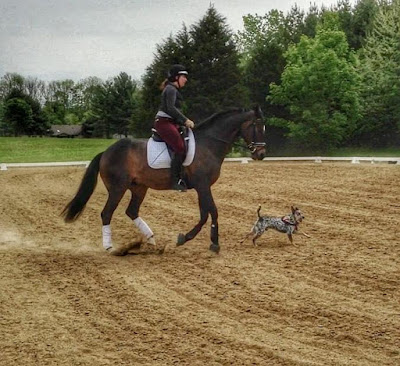 Yankee's work has mostly been taken over by his 2016 leaser and she has done a great job with his fitness so far! Yanks has really taken to his new job as schoolmaster too. 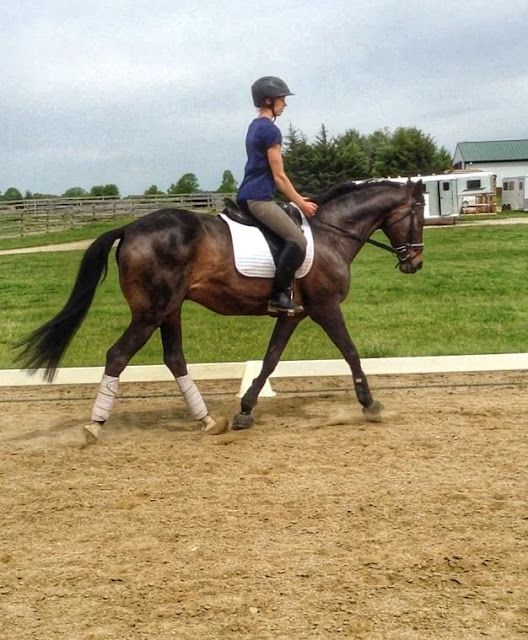 He was allowed to jump mid June and the transition back to full blown work was smooth!

Leaser V and Yanks have tackled 3 shows now; 2 schooling and one USEA event, coming away with ribbons at each, including two winning jumper rounds and a 7th place finish out of a large, competitive devision at the recognized event! 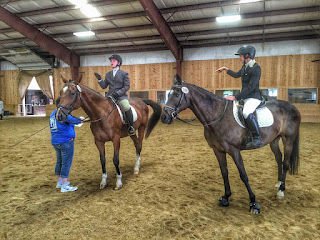 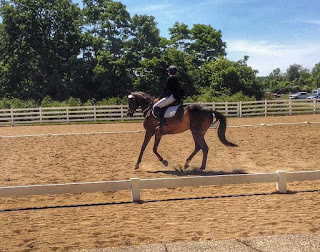 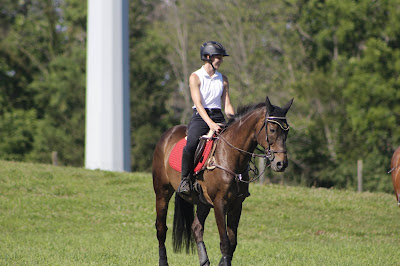 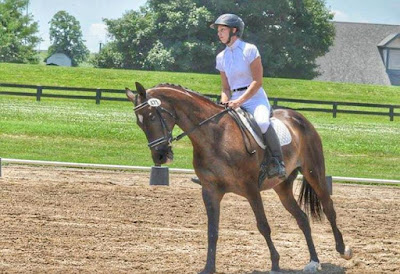 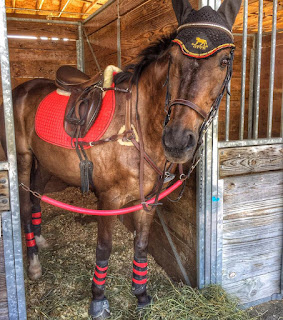 **More updates and pics to come!