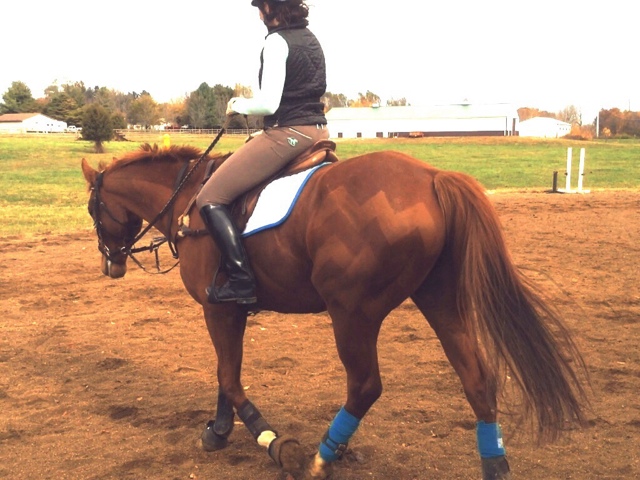 I'm getting ahead though.

I was putting off posting because I was debating writing that WP post I had threatened, then Amanda's post about ML bitting choices literally blew up (coverage now on EN and people on COTH throwing themselves into shit fits) and we only need one scandalous blogpost a week...& then I had to capture screenshots from the videos and get them uploaded and then adulting happened. Per usual. I'm a terrible blogger.

Sunday though, was particularly wonderful. 'Twas a Sunny, crisp and brisk fall day. I had big plans to get some jump schooling in on The Bae and was super stoked I actually had someone to video (yay boyfriends!) . No pressure or anything.

I tried to match everyone accordingly, not realizing my shirt and breech piping was a completely different shade of sea foam green than my belt, pad & polos, but it semi worked out. Because we all know outfits are just as important as the riding.

The warm-up felt amazing. He was loose, forward and alert. Since he was there, I demanded asked The Boy to make himself dizzy videoing our flatworm warmup. He obliged, and despite the weird lighting outside, nabbed some really great videos of Bacardi's HELLA improvement on the flat. I forsee many more schooling/showing cameraman duties for that boy. He does not know what he's gotten himself into *evil cackle*


Now if only my inside hand would stop floating downwards, these would be perfect. Despite mentally thinking "inside hand up up up" it still creeps back down. Damn muscle memory! Fuck you!

Despite my wayward and misbehaving inside hand, B still managed too look no less than stunning. 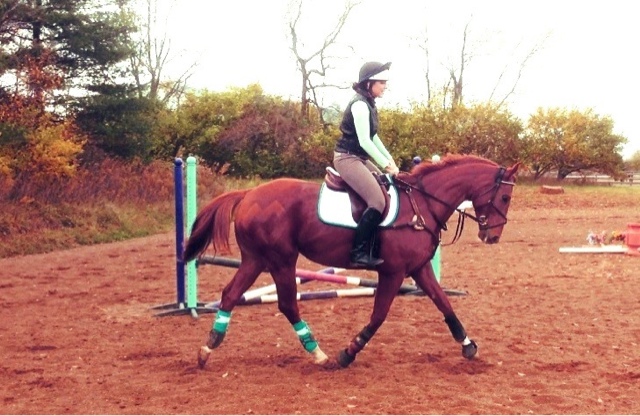 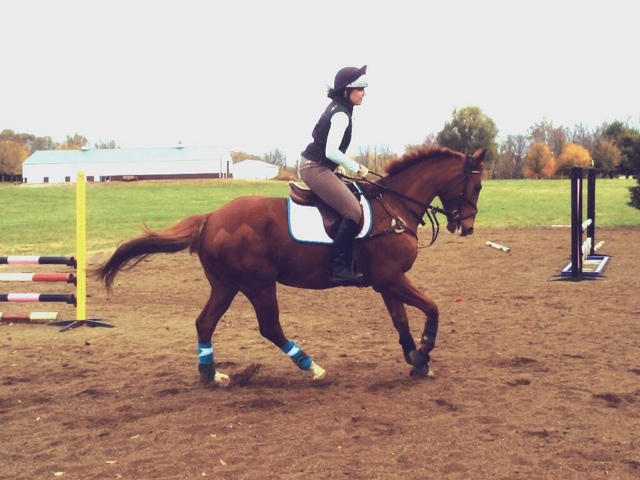 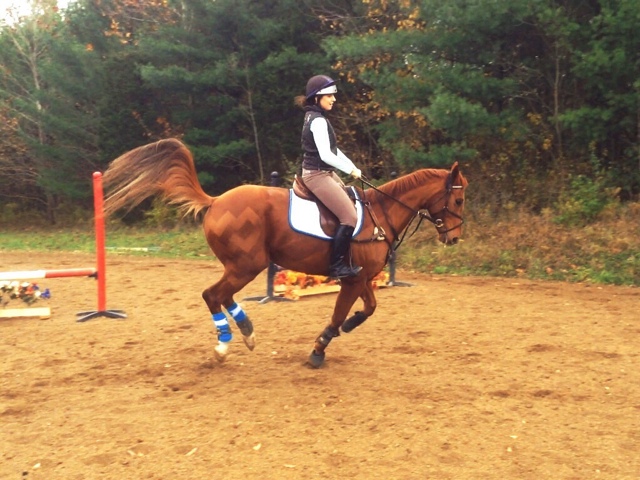 I'm a big fan of his tail flips for some reason, even though someone commented on it previously on Instagram all judgemental n' shit, positive he's in pain, of course- I think they're fun pictures. He's always done this, even in the field, and I find it makes for some wicked cool pictures. But that's just me.

Overall, steady and monumental improvement from even a few short months ago. He's lengthened his frame, become more active behind and remained engaged through his topline. So much progress I can't even. 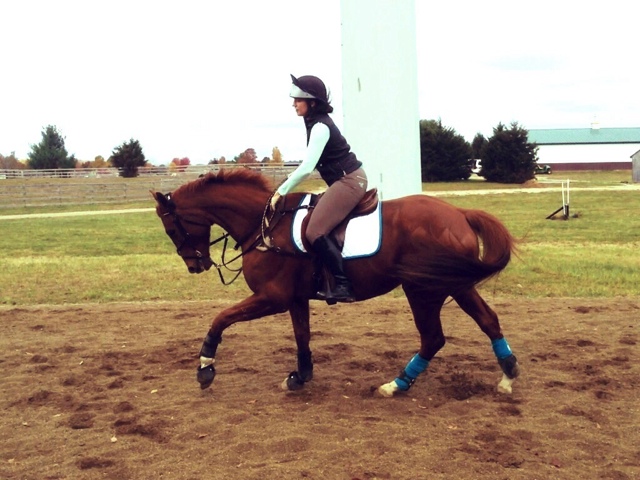 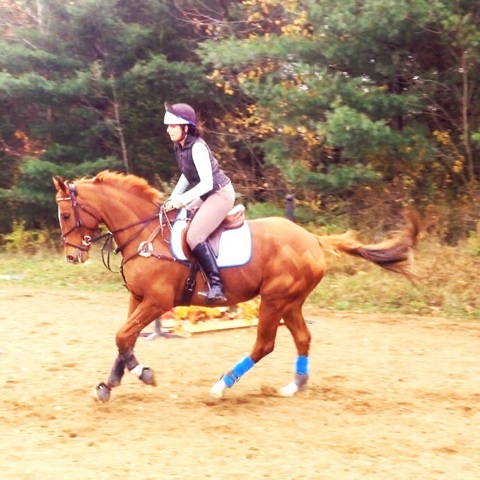 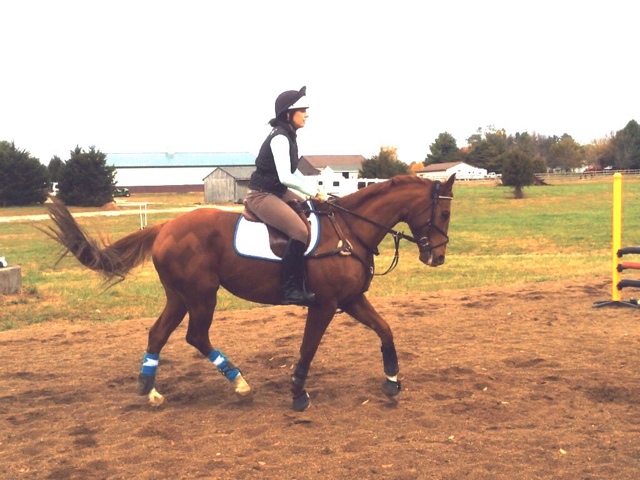 After the wamr-up, he was feeling really ready to jump. Before we even started jumping, I knew he would be a little "UP". It was a cold day and it was slightly windy, not to mention he's really starting to learn how to use himself and love jumping. I figured I would have a little pistol on my hands, but B really wasn't awful or out of control like he can get sometimes.

That being said, Mr Zoomy Pants was very consistent. He jumped all the warm ups well and only bobbled when I did (still a little out of riding shape here). 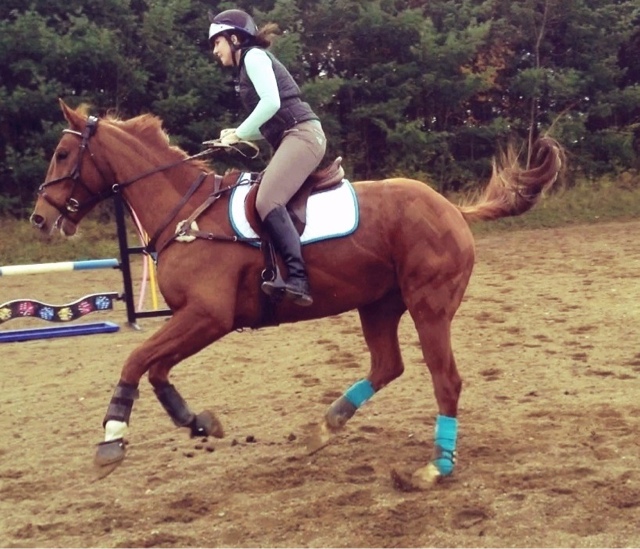 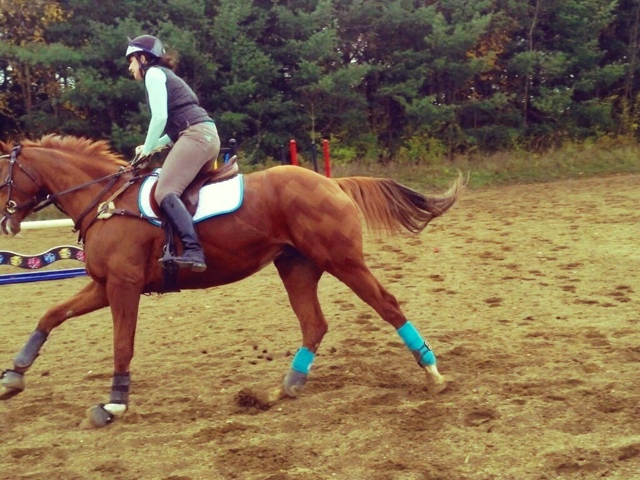 I practiced a few courses (keeping in mind that the zoomies were prevalent) while the jumps remained low and was thoroughly impressed with his progress on stringing things together. Even with the zoom zooms, he's making progress. 6 months ago it was impossible for him to even jump two jumps in a row. He was just too weak and inexperienced. Darting between fences, refusing, falling forward on landing and generally being a giant mess of legs was our life. I wondered if it would EVER get better.

6 months later, we still have minor bobbles after landing, but with a few half halts and steady & calm contact he comes right back. He can do lines without falling apart, and we don't lose "it" after 6 fences. Hashtag, proud. 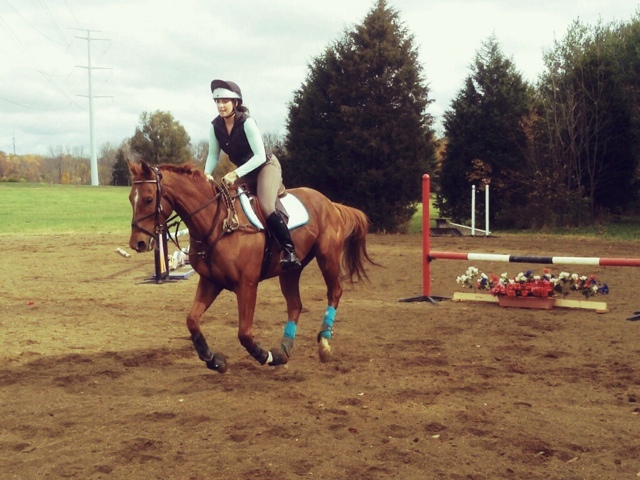 He went from the extreme zoomies, to landing like this-nice and balanced and relaxed. Floored. Absolutely boggled by this horse sometimes, in a good way.

And here's some more pictorial evidence, because pics. 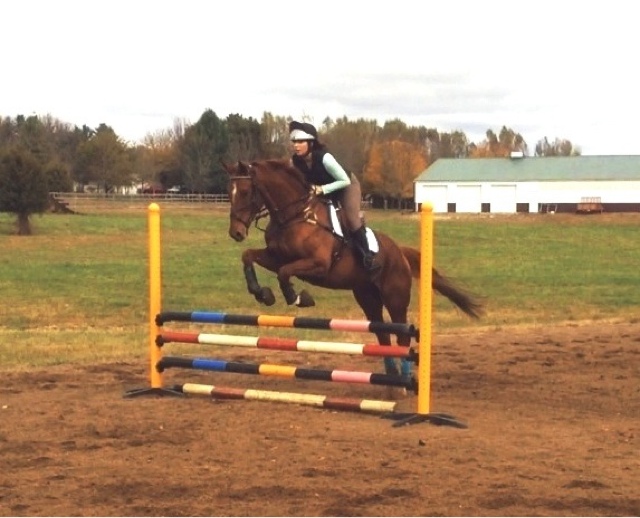 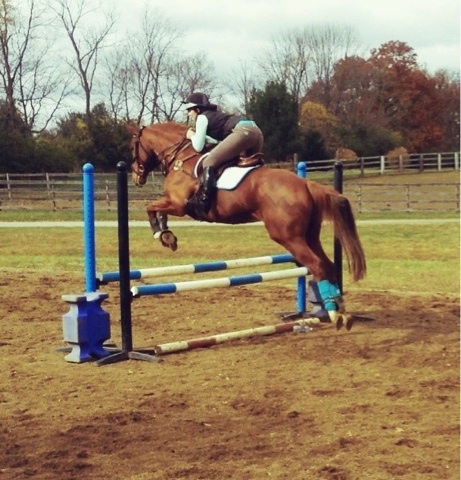 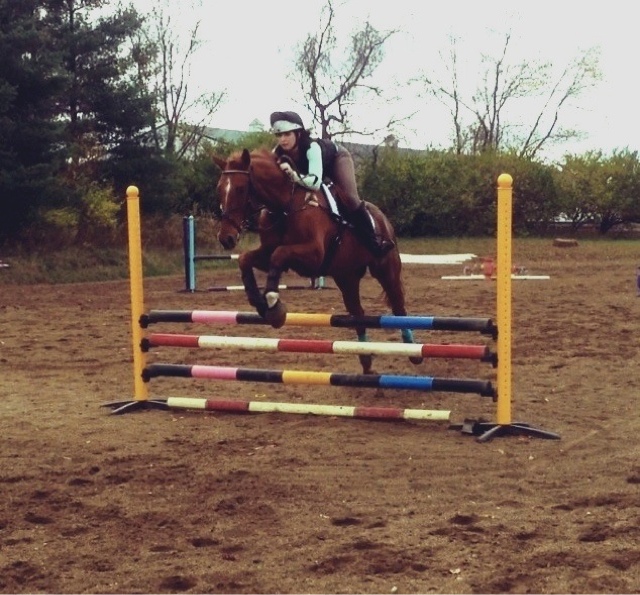 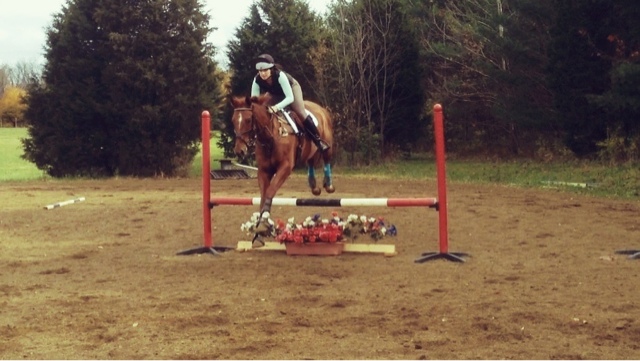 After four run throughs of our little course, I asked The Boy to raise a few jumps and focused on jumping them cleanly (hehehe, YAS, be my slave assistant)

I hope I can get the videos to post soon, because it's REALLY cool to watch and even more cool to ride. B has this amazingly powerful and collected canter to single fences. I feel like I'm floating. And then he rockets over the jump while I struggle to stay with him haha. 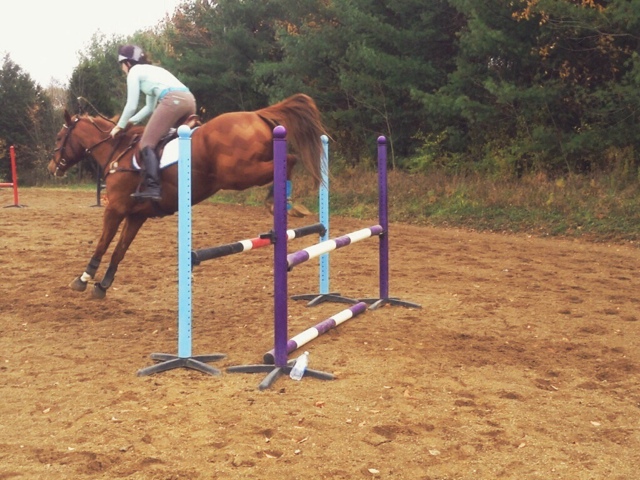 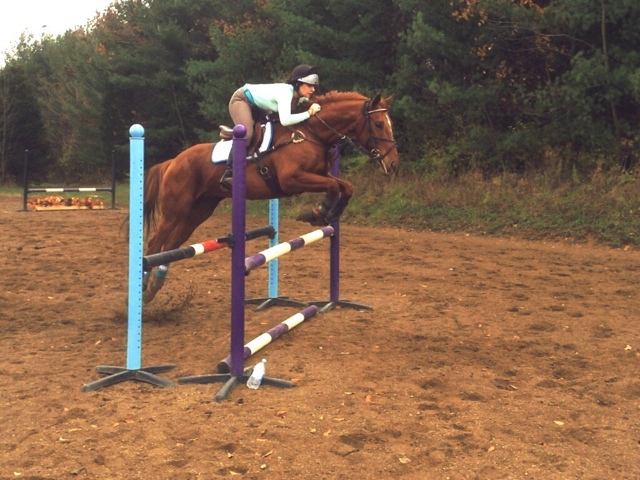 One day I will figure it out, but I've never ridden a horse with such a powerful jump as him. I truly think this guy can and would jump well over 5ft, easy. Those standards are about 9ft (unecessary IMO), for comparison purposes.
There was one refusal and I felt it 5 strides out and did nothing. So that was my bad.

Otherwise though, when I'm mostly doing my job, this guy delivers. 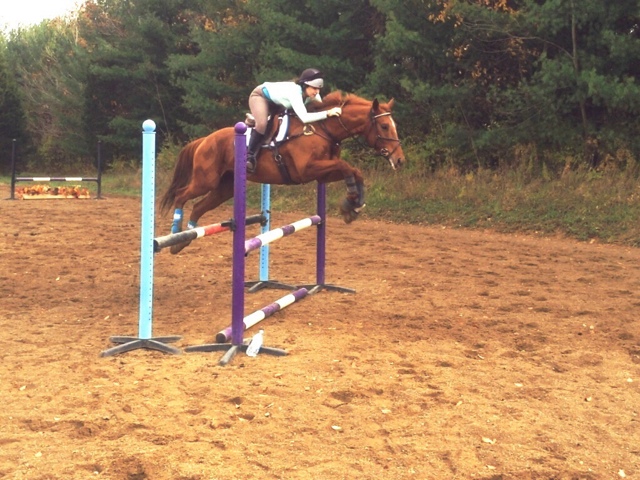 Lets not discuss my position, I'm aware it has fallen by the wayside *laughs nervously*. Maybe one day I will learn how to ride.

That aside, I'm totally and 100% in love with this horse. And I can say that I have been from the day I saw him on Facebook, many many months before he even went up for sale. It may not have seemed like it with all my frustrating posts and aggravated words in the past, but I truly have. We all have those horses that we have to work extra hard with, but once it clicks, it's worth every excruciating minute. Right? 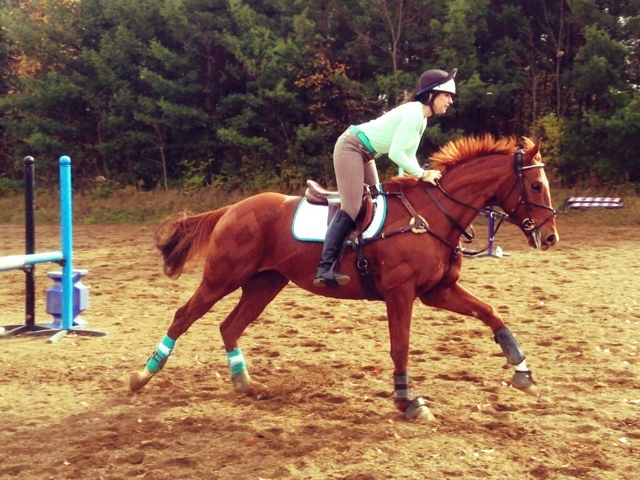 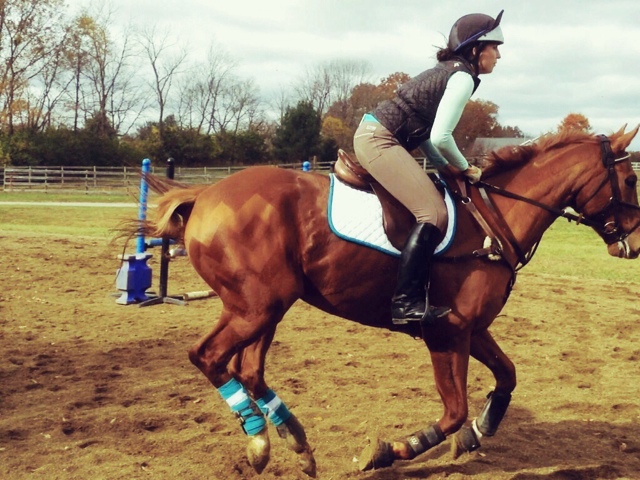 My favorite is silencing the haters. So. Many. People. told me to give up on him. Sell him. Get rid of him. That he wasn't worth my time. That I wasn't good enough to deal with him. That I was a horrible person for speaking about him in a negative light. And it did hit me a little. I started to believe it, just a little bit. But I knew deep down this horse was something. I kept telling myself that it would be worth it, it would be, and to keep pushing.


And I think he's proved that. He's really grown up. He's going to be something someday, even if that something is just MY horse. He's mine. And want the haters to suck it. Because he's fucking fabulous.


To the rest of you, thank you for reading this blog and following our story and never giving up on us. Thank you for all the kind words of encouragement along the way. I love all of you!
Posted by Checkmark115 at 8:03 PM 10 comments:
Email ThisBlogThis!Share to TwitterShare to FacebookShare to Pinterest
Newer Posts Older Posts Home
Subscribe to: Posts (Atom)